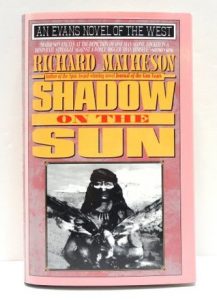 It is my habit to read horror fiction around Halloween. I would not be surprised if a lot of people did this. It tends to get one in the mood for the holiday. I don’t inundate myself with it because I can burn out reading too much of one thing, but I definitely make a point of it around time this year.

I chose two of the novels I read this year, because, aside from the horror element, I thought they would appeal to visitors of Frontier Partisans. The first was The Boats of the Glenn Carrig, which I already reviewed here, and this second one is Shadow on the Sun by Richard Matheson.

Matheson was fairly influential as a horror writer. His novel I Am Legend set the template of the post-apocalyptic horror novel that most zombie stories follow (even though the creatures in the novel were vampires, not zombies.) He wrote many episodes of the Twilight Zone that are considered classics. Stephen King names him as one of his favorite authors.

In the 1990s, he shifted gears and wrote a number of Westerns. This was not unprecedented since he had co-written (with fellow Twilight Zone alumni Charles Beaumont) an episode of Have Gun Will Travel. However, he is not well known for his Westerns as for his horror.

It was natural that he would then write a Weird Western. For some reason, horror and the Western mix well. I never could quite put my finger on why that is, but it may be that there is a basic grammar to both genres that makes it appealing. It could also be that horror tropes can work in any setting.

Either way, the Weird Western has produced a lot of good works. Blood Meridian is one, if you consider the Judge supernatural, and is also probably one of the most important books of the 20th Century. Robert E. Howard was a pioneer of these stories with “The Man on the Ground” and “Old Garfield’s Heart.” There are also Joe Lansdale’s Jonah Hex graphic novels. In fact, Hex originally appeared in Weird Western Tales from which the genre gets its name, (though in its original run it lack supernatural elements). Lansdale also wrote the very good Dead in the West novel. So there are many books worth reading in the genre, including Shadow on the Sun.

The novel deals with mysterious deaths in an Old West town at the same time as a peace treaty between the settlers and the Apache is signed. The main character is Billjohn Finley. It is said that his parents were divided on naming him Bill or John, so… BillJohn.  He is the local Indian agent and, as mentioned in the novel, a rare one who is both honest and respectful of the Apache. This, at times, puts him at odds with the other townspeople, who blame the Apache for the slayings. The truth turns out to be much darker. 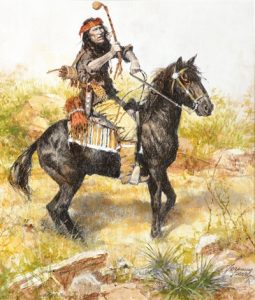 At the time of the slayings, there is a stranger in town who Finley suspects as being the culprit. It does not take much literary sophistication to for the reader to figure out that Finley is right. However, it takes much of the novel to figure out who or, more precisely, what the stranger is. It would have been easy for Matheson to simply insert a vampire or werewolf in the novel as the monster, but Matheson comes up with something more unique.

I mentioned in my review of The Boats of Glenn Carrig that its writer, William Hope Hodgson, was not that skilled in prose or characterization, though.  skilled in other areas. Matheson is better than Hodgson in that his prose and characterization is acceptable. By this I mean, that his prose is clean and competent but not particularly stirring. His characters have a bit more depth to them than Hodgson’s, but aren’t as deep as they could be. Stephen King, despite what some critics say, could create deeper characters, but then the novel would have been at least twice as long.

The plot is good one, if not exactly groundbreaking in the Weird Western sub-genre. The pacing is good. He keeps things moving with every scene adding to the story. Matheson deals fairly decently with the conflict between the settlers and the Apache. He is sympathetic to the Apache, but he does not make the mistake of making them Noble Savages Living In Harmony With Mother Earth.

I would say that, in comparison, Hodgson’s book has better atmosphere than Shadow on the Sun. The threats the characters in his book face are more frightening than the one in Matheson’s. Still, as I said, Matheson was right to go with something other than a cliché vampire or werewolf.

This story is not a must-read, but it is not one that I regret reading either. I Am Legend is certainly more influential. Shadow on the Sun is, however, a good read for the Halloween season.