A few items for you to enjoy during this fine fall weekend. 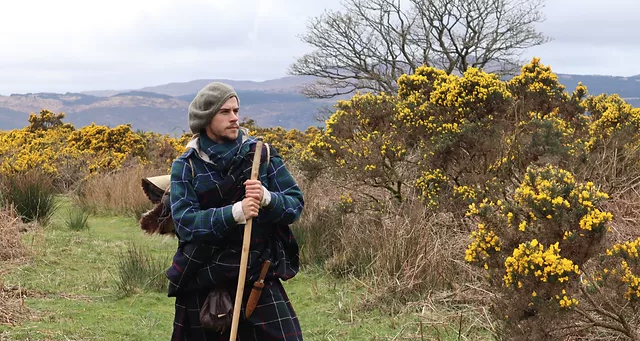 Tom Langhorne has built a way of life around exploring the lifeways of the Scottish Highlanders of the 17th/18th Centuries. His YouTube Channel is full of Frontier Partisan goodness.

I have spent a large part of my life exploring the wild landscapes of the Highlands and I have always been intrigued by the stories of warriors and the myths connected to the mountains, lochs and glens.

However, it was only when I learned about the multiple ways in which the Great Kilt (known as the plaid or Feileadh Mòr) was used in surviving the harsh Scottish environment did I develop the idea of exploring this part of my heritage in terms of “wilderness survival skills”. The more I researched the more fascinated I became and I realised this was a valuable route to explore not only past survival skills, but also culture, history, language, folklore, martial arts and mythology. I chose the time period around the 17th/18th Century for a few reasons. It is a well known period of Scottish history around the world for its famous stories of Jacobites and Rob Roy. It was also a very influential time for the culture and politics of Scotland today.  Furthermore, despite being relatively recent in history, there were aspects of Highland culture that remained relatively unchanged for thousands of years compared to the rest of the UK and Europe. Therefore, there are threads of knowledge going way back to the Celts and beyond. Exploring the Gaelic language is also a big part of the series as it is gives insight on how our ancestors saw their reality.

I now teach and share what I have discovered from this research, in an effort to rekindle this knowledge and keep it alive for future generations.

While this video is Eastern European in origin, it’s highly relevant to the 17th Century doings that I’m currently digging into. Some colonial militia was still using the matchlock in 1675 when King Philip’s War broke out — although the Indians had almost universally adopted the flintlock. This is a deep dive for firearms nerds — and a good un. I am revisiting the excellent book Thundersticks for its chapter on the impact of the gun trade on King Philip’s War, doing prep for the next podcast series.