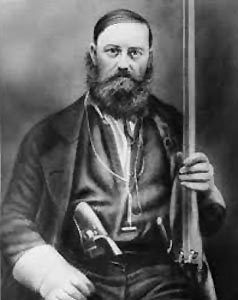 Sons of Anarchy creator Kurt Sutter has the green light for a tale of frontier justice in my home territory.

Nearly a year after the series was first reported to be in development, The Abandons — a new Western drama from Sons of Anarchy creator Kurt Sutter — has been officially given the go-ahead for a 10-episode run by Netflix.

What’s it all about? According to Netflix: “As a group of diverse, outlier families pursue their Manifest Destiny in 1850s Oregon, a corrupt force of wealth and power, coveting their land, tries to force them out. These abandoned souls, the kind of lost souls living on the fringe of society, unite their tribes to form a family and fight back. In this bloody process, ‘justice’ is stretched beyond the boundaries of the law. The Abandons will explore that fine line between survival and law, the consequences of violence, and the corrosive power of secrets, as this family fights to keep their land.”

Sutter will serve as executive producer and showrunner for the series, which does not yet have an announced cast or premiere date.

Well, we’ll see. Sutter is wildly uneven, both personally and creatively. I loved Sons of Anarchy, despite and because of Sutter’s excesses. His medieval drama The Bastard Executioner was unwatchable, and was mercifully beheaded after one season.

Oregon in the 1850s gives wide scope for Sutter’s fascination with marginal misfits — and it could go really good or really bad. And, frankly, the way this state is currently headed, “uniting tribes and family to fight back” may become a contemporary reality.

Anyway, I think Sutter should pay me as a creative consultant for one piece of advice: Just put Joe Meek in it, Kurt. Trust me on this: You can’t make up a personality bigger and more colorful than Joe.