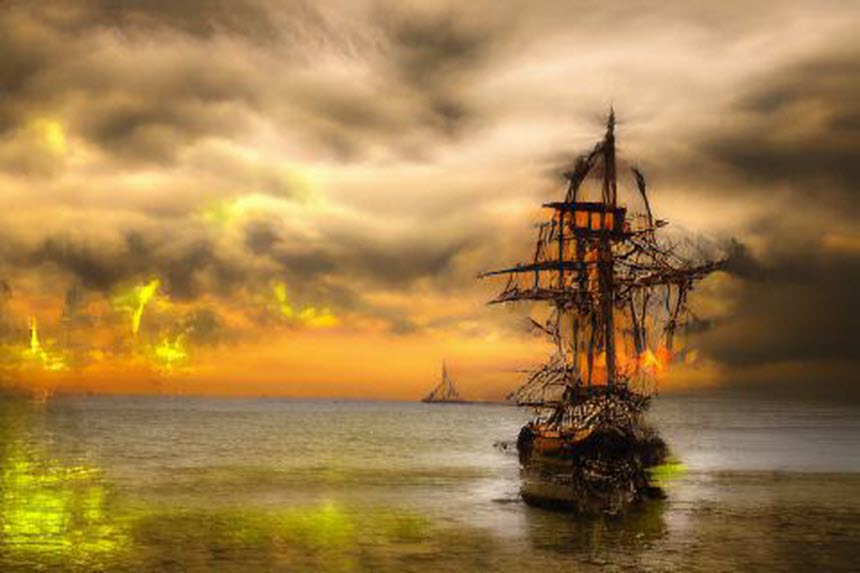 The ship Glenn Carrig has capsized. The passengers and sea men are lost at sea in the boats. They come across an unknown land the inhabitants of which are hostile.

The Boats of the Glen Carrig by William Hope Hodgson is both a frontier story (specifically the maritime frontier of the 18th century) and a horror story. It is in some ways a brilliant and in some ways flawed novel.

Beginning with the characters adrift in the boats, the novel soon finds them in unknown seas. They travel to an island which seems haunted by an unknown something. The characters then set out to sea again. They find another island and a continent of sea weed. They are marooned on the island and another ship is stuck in the sea weed. The inhabitants of both are monsters. A battle for survival ensues.

Hodgson was actually a sailor (see his bio below) so he writes authentically about the sea. He does not make the mistake of overloading the story with nautical jargon. You don’t need to know too much to understand the story. Yet, because of his background it feels authentic.

He also shows a great hand at suspense and creating an atmosphere of eeriness. The monsters and other horrors the characters encounter are introduced gradually. This slowly builds tension. He uses atmospheric details to great effect. He also knows when not to explain. A lot of things are left unexplained but that makes the story more eerie not less. We don’t know how the creatures of the novel came about or even to extent what they are. Are they supernatural? Mutations? Exotic animals?

Hodgson is fairly skilled with plot. The story grips and we want to know what happens next. The book is not too long and very well paced. The horror is introduced gradually, but at the same time the plot moves along at a decent pace. So it does not make the mistake throwing weird events at you too fast for you to comprehend, nor does it take so long that you feel like skipping passages. Since the book starts with the characters adrift in the boats, it starts with a fairly good deal of suspense. The idea of being adrift at sea is frightening even without the supernatural encounters.

One of the things I liked is that the characters are fairly brave, which makes sense because they are men who do a dangerous job. They do not collapse in horror and while they are not reckless they stand and fight when it is prudent. There is a great chapter in which they make a stand on a cliff when monsters come out of the sea. The fight is desperate and stirring.

Hodgson also has a great talent with creating weird threats in this and other stories.

He does however have his flaws as a writer. The two biggest ones are characterization and style. His characters are paper thin. We actually don’t even know the names of the main characters. The narrator is only referred to as I and the second most important character is only known as “the Bo’sun.” We don’t know much about besides the fact they are brave, tough, capable men. The narrator was a passenger and is apparently educated. The Bo’sun is not as well educated, but is probably braver and tougher and in some ways the real hero of the novel. We are also told he is a good fellow, though while we see much evidence of his bravery, we are just told this not shown. The narrator often speaks about his emotions during the events so we know he is afraid, but is brave enough to overcome it. Thing is that’s it.

If the characters were more defined the suspense would have been greater. There is also love story in the novel but because of the lack of characterization I did not care about it. It did come near the end of the book so it did not really ruin the book. It may have even made the ending better, but it is kind of weird that it is even in there. (Some people seem think that having a character falling in love is characterization. It is not anymore than having them fall out of bed. It’s an element of plot. However, it needs a good deal of characterization to make interesting…at least for me.)

That said it is nice that all the characters are brave and tough and don’t just fall apart when bad things happen.

Style wise, it is interesting. The novel is written in the style of the 18th century with no dialogue. Hodgson does not have an ear for the beauty of language, but he conveys clearly what is happening. I, at least, was never confused by the language. Yet, at the same time, I never felt any passages were particularly evocative.

So would I still recommend the book?

Yes, if you think you can put up with its flaws. After all, every writer has their flaws. Style and characterization happen to be literary virtues that are considered the most important by critics and academics nowadays. This has not always been so and a book can have other virtues which Hodgson has in spades. He comes up with good ideas for stories and good plots for them. He has atmospheric detail that adds to the story and his knowing from his days at sea adds authenticity. These virtues should be enjoyed even if Hodgson has other flaws.

The Boats of Glen Carrig is ultimately a combination of the sea adventure and horror genres and is definitely entertaining. 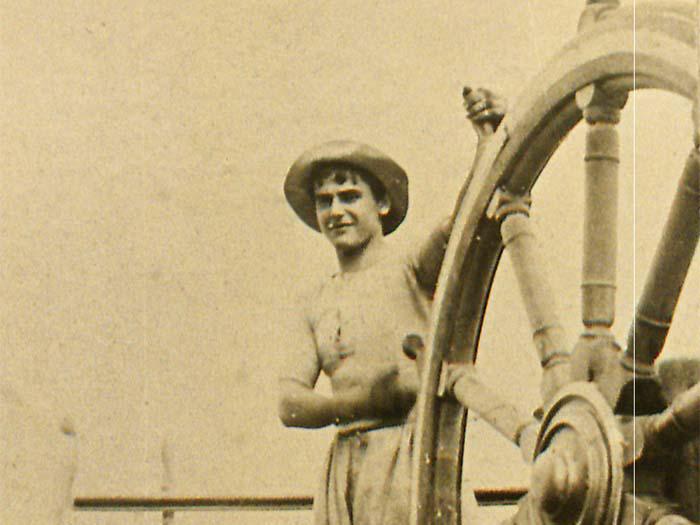 William Hope Hodgson was an interesting fellow. He was born in Essex in 1877, the son of an Anglican priest. As a youth, he had fascination with the sea and tried to run off from boarding school to become a sailor. He was caught but eventually got permission to become a cabin’s boy. Over the years, his fascination would turn sour due to bullying by older seamen, and how hard the life was.

Due to the former, Hodgson began a body building routine. He would eventually leave sailing to set up a gym. He also began writing articles on physical culture. This would eventually lead to writing short stories and novels. Most of what he written were what we would call horror fiction and many were set at sea. These include a series of stories about the Sargasso Sea. He would also create Thomas Carnacki an investigator of the supernatural. 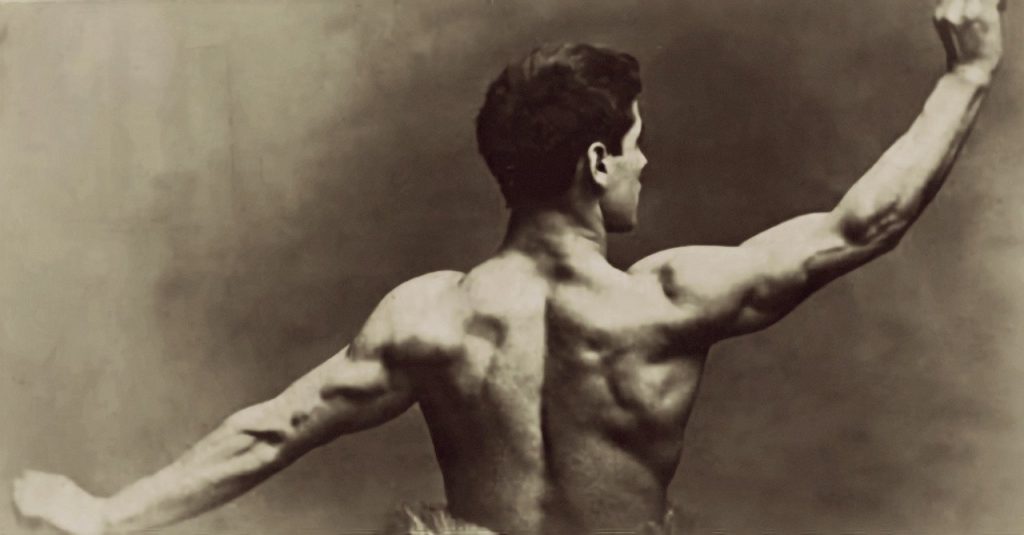 He would write four novels The Boats of the Glenn Carrig, House on the Borderland, The Ghost Pirates, and The Night Land. There is suggestion that these novels were published in reverse order than the one they were written in.

When World War I broke out, Hodgson joined the Royal Artillery. (He refused to join the Navy.) During training, he would fall from his horse and break his jaw. He was discharged but refused to remain on the sidelines and reenlisted.

Hodgson would die at the Fourth Battle of Ypres at age of 40. 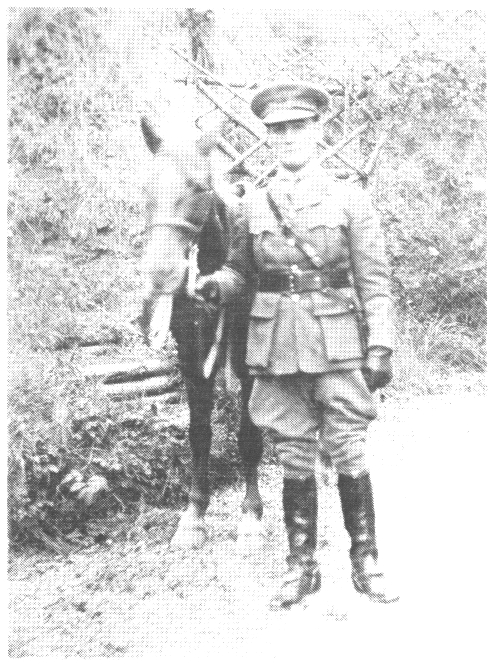 Editor’s note: The Maritime History Podcast offers a four-part audio reading of The Boats of the Glen Carrig.