Appare-ranman (which roughly translates to Appare in Full Bloom) is an over-the-top race through an exaggerated version of the American West.

The American West is not a typical setting in anime. Normally, animes are set in Japan or a science fiction or fantasy realm (depending on genre). While it is not unique in this regard, it is still very rare. (Interestingly, various science fiction anime, such as Cowboy Bebop and Trigun, depict settlements on other planets as similar to the Wild West).

The American West presented in the anime is not of course the West as it really was, but a fantasy version. Not in the sense of magic existing in the series, but in the sense that the show exaggerates how the West really was. The show is filled with intentional anachronisms. All the terrain traversed looks like Arizona or New Mexico, even the out skirts of Los Angeles and Chicago, which looks nothing like depicted in the series.

So the series is not an accurate period piece — but it is a lot of fun.

The plot follows Sonaro Appare, a genius inventor from Japan, and Isshiki Kosame, a samurai as they find themselves stranded in America. After fleeing the wrath of a feudal lord when one of Appare’s inventions ruins the lord’s garden, Appare and Kosame end up a drift at sea. They are picked up by a ship and taken to the US, where they have to enter the “Trans America Wild Race” to earn enough money to return to Japan. From there the adventure begins.

The Trans America Wild Race is a race from Los Angeles to New York in those new-fangled inventions: the automobile. Among the other colorful participants in the race are three outlaws known as the Thousand Three because each one is worth a thousand men in a shoot out: Dylan the Hero, Crazy TJ, and Gil the Butcher. There is also: Jian Xialian a Chinese-American woman hoping to prove herself in a man’s field, Al Lyon a son of rich European car manufacturer who hopes to prove himself a worthy successor, and two outlaw brothers. Appare and Kosame also pick up a young American Indian boy named Hotato.

Though set 1890s, the anachronisms are many. Kosame lives like a samurai despite the samurai caste having been abolished decades earlier. The cars in the race are more advanced than any of the time period. A significant area of America is over run with outlaws. The Panama Canal is mentioned long before it opened. For that matter, Crazy TJ is seen listening to rap music on a gramophone.

My advice would be to just go with it. 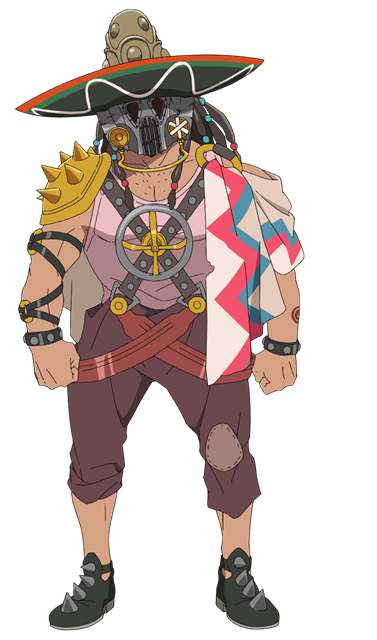 What you get is a twisty plot with a lot of over top racing and action scenes. There is also a fair bit of humor. In fact, much of the anachronism is used to humorous effect. Others are just done because they seem cool to the creators.

What is interesting is that there are character arcs for most of the characters. Appare, who is brilliant but socially awkward to the point of probably having some form of high-functioning autism, learns to be less selfish and to think of the consequences. Kosame has to overcome a childhood tragedy in order to protect his friends. Hotato is seeking vengeance on the man who killed his father. That the characters have real desires and growth tends to ground the show despite the fact it is in many ways unrealistic.

What you have here is a combination of the Western, the racing genre, and steampunk. The racing part is obvious. The steampunk elements have to do with advanced automobiles in the Old West. The Western elements come from the setting and the climax of the series which is a showdown in a ghost town. Also, one of the main themes, the end of the era, is common to Westerns. One of the main plot elements is the railway companies attempting to sabotage the race in order to maintain their dominance, and to prevent the era of the automobile. This may be the one thing about the series that I have a problem with. It is very optimistic about technology, which I tend to think is often a double-edged sword. I would not mind if the end of the era was dealt with more bittersweet than it is portrayed. Still, other people might have a different opinion on this.

The animation is quite good, particularly the backgrounds, even if they don’t always correspond to the terrain in real life. If Monument Valley can stand in for Texas in The Searchers, I think we can forgive this.

The show is currently available on Hulu.