Thirty years ago, I sat in a darkened theater in Southern California as kettledrums rumbled, and gorgeous orchestral music rose over images of hazy hills. The scene cut to three men sprinting through thick, dark forest. The swing of a long-barreled flintlock rifle, the flash and the roar — and I was transported to the New York frontier in 1757.

Since that September day in 1992, I’ve watched all or parts of The Last of the Mohicans times beyond count. I have probably listened to Dougie MacLean’s The Gael theme every day since.

Michael Mann’s magnificent picture premiered on September 25, 1992. I was living in Sierra Madre, California, at the time — right at the foot of the Mt. Wilson trail. Aye, as you can imagine, that Celtic theme coursed through my blood as I hiked or ran up that trail. When Lady Marilyn and I visited Sisters, Oregon, in August of 1993, with an eye to rolling up our own version of the Oregon Trail, we listened to the soundtrack of The Last of the Mohicans as we drove  over the Santiam Pass and through the dense west-side forest back to Portland — and our decision was made.

I never visit Sahalie Falls in the Cascades to our west without picturing Nathaniel, Uncas and Chingachgook leaping improbably down the falls to escape Magua and his Huron, and live to fight another day. 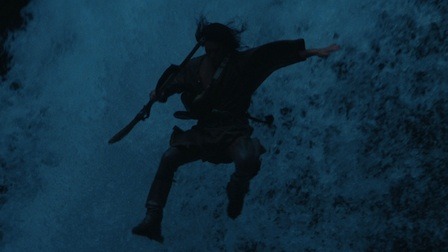 The climactic scene of personal combat on the cliff trail remains tense and dramatic no matter how many times you see it.

I imagine our dog-brother Lane Batot is feeling the passage of the decades as he contemplates his work on the film three decades ago. The last two editions of Muzzleloader Magazine feature Ted Franklin Belue’s reminiscences of that arduous shoot. There is a series of videos on Youtube on the making of the film that are well worth your time. They’re linked here. Lane offers extensive commentary on his experience on that post.

I shall raise a horn  tonight to the magnificent LOTM — and today’s soundtrack shall be The Gael in all of its many incarnations. Here’s a favorite: