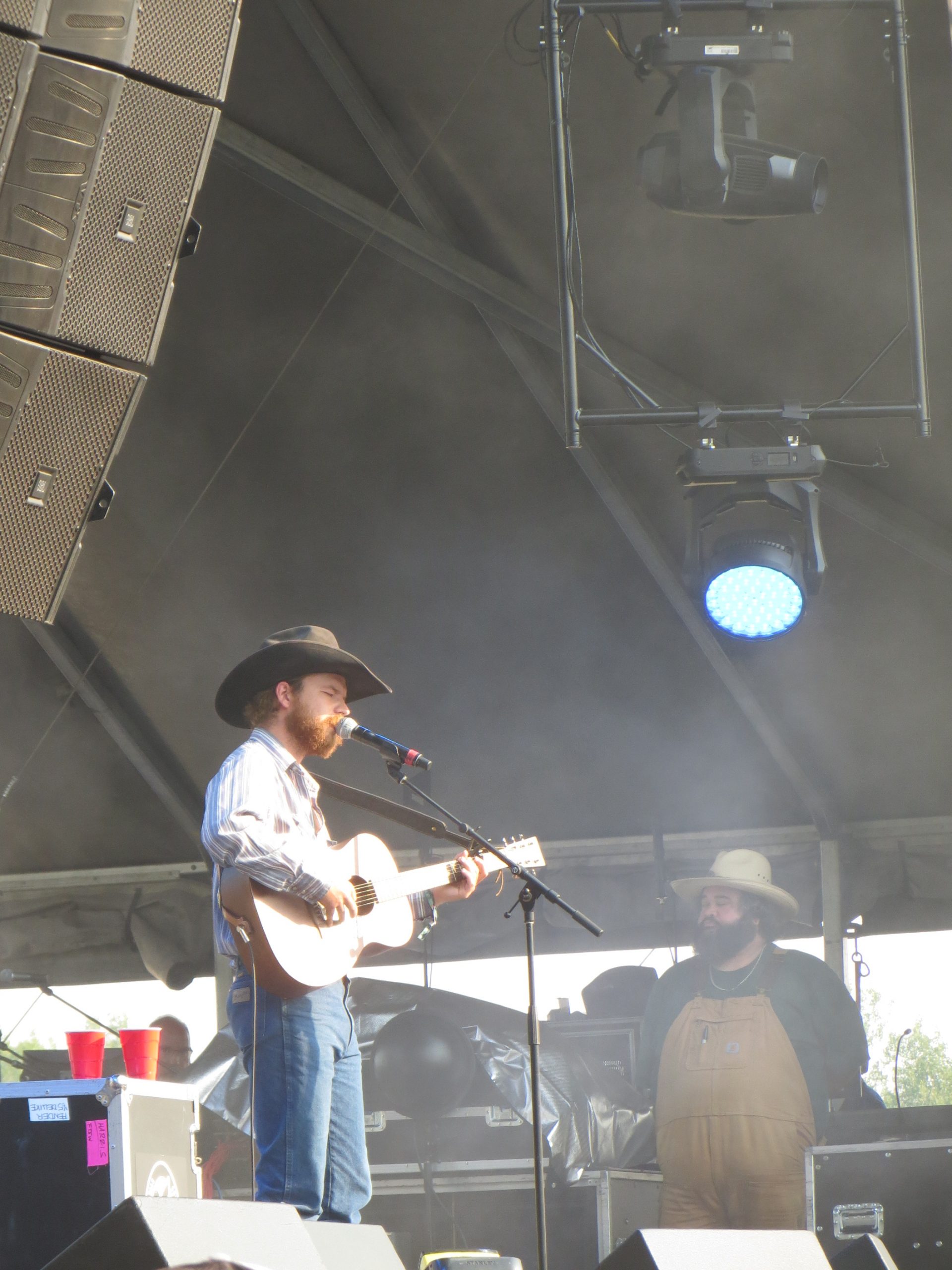 Colter Wall dropped two new singles on Wednesday. One is an original, Cypress Hills and the Big Country, about Colter’s home country of Saskatchewan.

The other is a Cowboy Jack Clement ditty, Let’s All Help The Cowboys Sing the Blues, which was featured on Waylon Jennings’ masterpiece album Dreaming My Dreams. Helping cowboys — and cowboy singers — get laid since 1975…

Well, dog brothers — there he is. 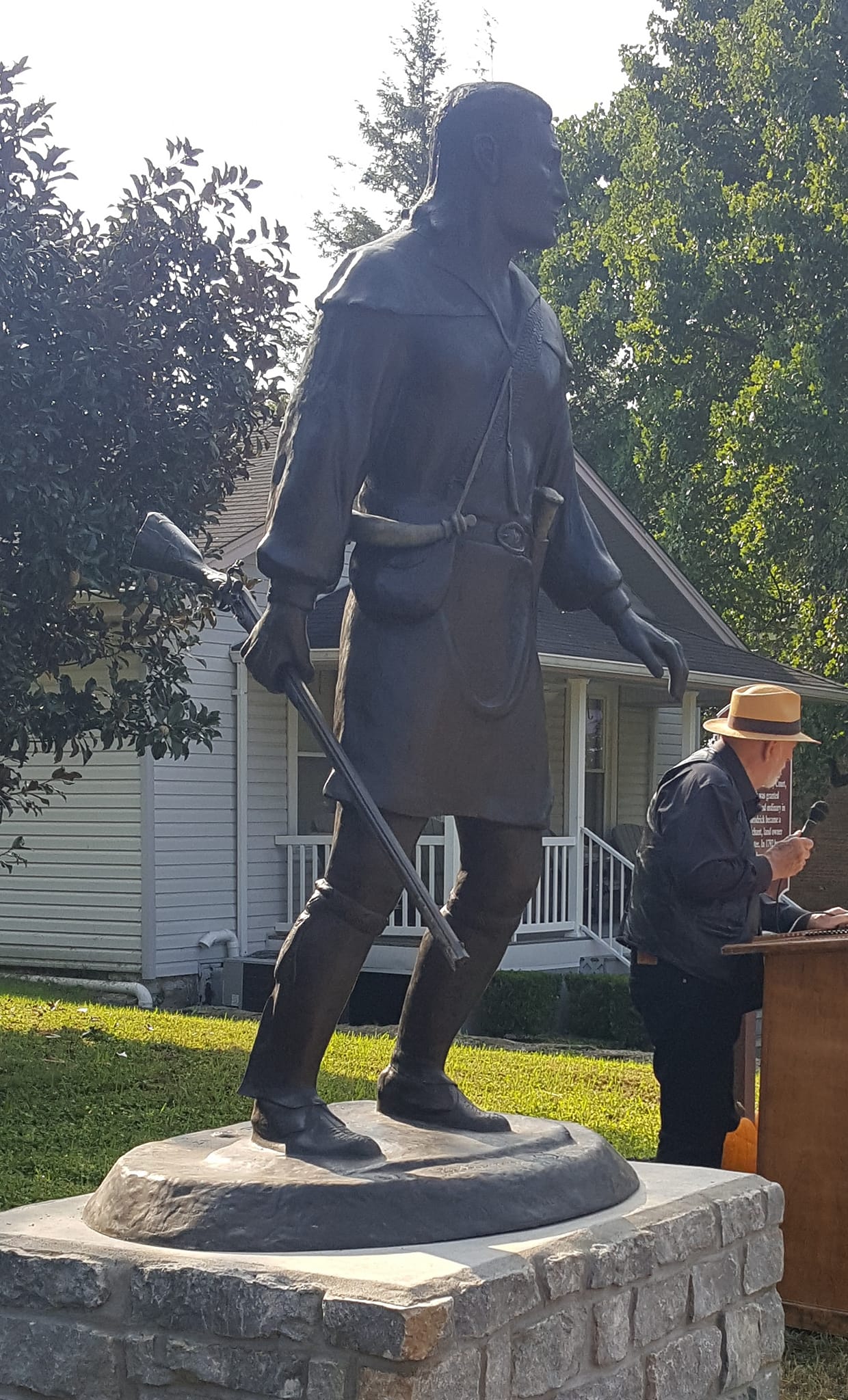 The unveiling of Earl Lanning’s bronze sculpture of Simon Kenton at the Old Washington Courthouse in Kentucky last weekend was apparently an outstanding event. Warms the cockles of me Frontier Partisan heart, so it does.

Frontier artist Steve White, who has painted many key scenes from Kenton’s remarkable life, posted the snap to Facebook.

Due out on November 29 (right on time for Badass Santa) is a narrative history of one of the singular battles in all Frontier Partisan history. Talkin’ about King’s Mountain. (Follow the link for a a couple of essay’s on King’s Mountain from Capt. Rick Schwertfeger from 2017). The author has several Revolutionary War titles under his belt, along with a tactical analysis of the Battle of the Little Big Horn that I must get to one day. This looks mighty good. 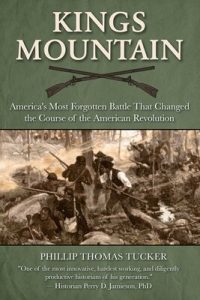 The Battle of Kings Mountain was the most remarkable, unexpected, and unorthodox patriot victory of supreme importance that was fought during the course of the American Revolution. The victors of Kings Mountain were South Carolina, Virginia, and North Carolina Backcountry volunteers (including men from today’s Tennessee) of a ghost army that suddenly materialized practically out of thin air from both sides of the Appalachian Mountains on its own and without authorization from the Continental Congress or Continental officers.

To defend their farms and families and the land they loved, on October 7, 1780, this ad hoc force of Backcountry volunteers from remote settlements across the frontier suddenly descended upon a well-trained and well-equipped force of more than one thousand Royal Provincial and Loyalist troops, who defiantly made their last stand on the summit of Kings Mountain, after having been caught by surprise.

Ironically, no battle of the American Revolution more forcefully demonstrated the lethal effectiveness of Southern militia and the future surreal horrors of America’s first civil war. This decisive battle in northwest South Carolina was fought between fellow Americans, including not only neighbors but also relatives, even fathers and sons, nearly three-quarters of a century before the Battles of First Manassas, Antietam, and Gettysburg, when young Americans once again slaughtered each other for what they believed was right.

The American Revolution, though it had its dark aspects, ultimately proved of great benefit to the world, enshrining the inalienable rights of man, and creating a mechanism of government that, whatever its flaws, is the best yet devised to safeguard them. On the other end of the spectrum, the Russian Revolution and the Civil War that stormed upon its heels was a catastrophe. It  let loose the demons of totalitarianism upon the world.

Antony Beevor, one of the great narrative historians of the Second World War, has a new volume out: 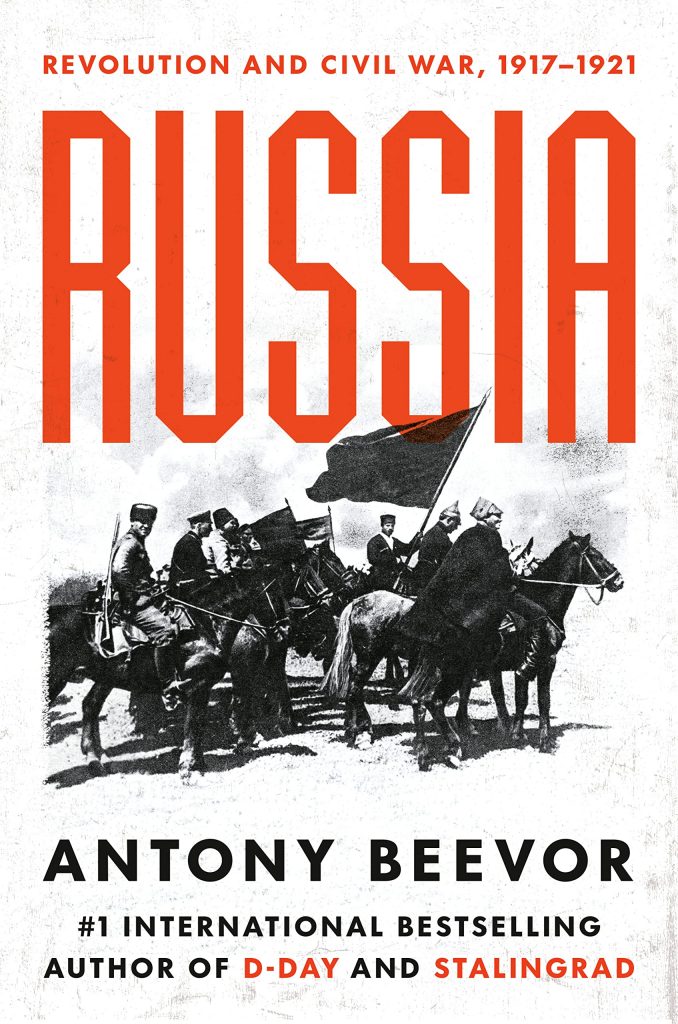 I somehow managed the self-discipline to put it back on the shelf at Paulina Springs Books (it came out of the storeroom in the same box with Indigenous Continent; the household gods of bookstores delight in tempting me). I will get to this one, though. I hold Beevor in great esteem, and am eager to get his take on the great cataclysm of the 20th century, whose echoes can be heard at this very moment in the roar of artillery in Ukraine. 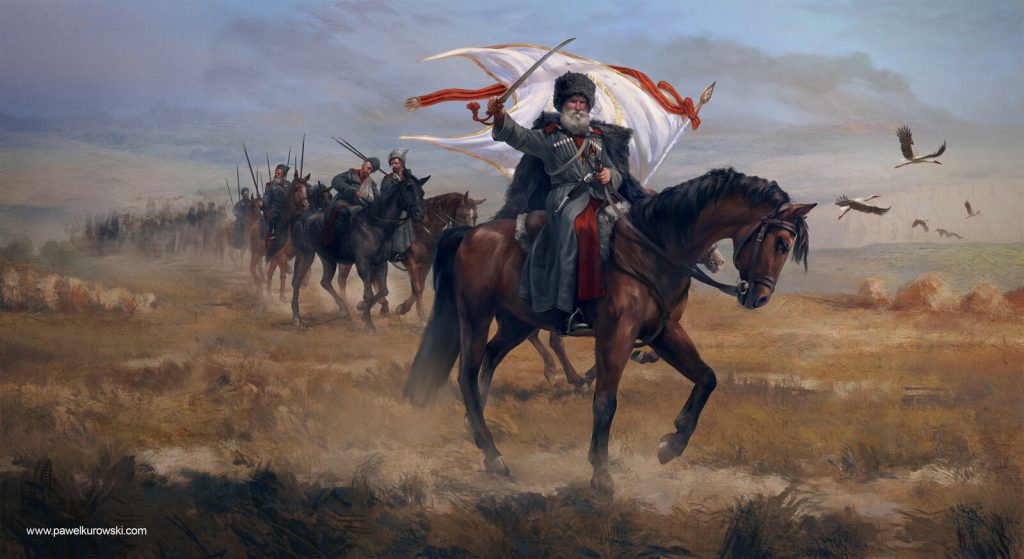 Aspects of the Russian Civil War are Frontier Partisan warfare blown out to massive scale — the partisan fighting in Ukraine and the warlordism of Cossack Atamans in Siberia in particular. The Cossacks are a classic case of Continuity & Persistence of a frontier culture across centuries. This is laid out nicely in a brief special segment of The
Great War series:

Ace medieval historian Dan Jones has dropped a new podcast series This Is History: A Dynasty To Die For. That dynasty would be the Plantagenets, the mad, bad and dangerous-to-know  family at the center of Jones’ excellent and entertaining narrative histories, The Plantagenets and The Wars of the Roses (The Hollow Crown in the UK).

Hosted by bestselling author and historian Dan Jones, the series explores the story of the most dysfunctional family of the Middle Ages - The Plantagenets – and examines how power, greed, religion and sex fueled their lives with turmoil. Previously described as the “real life Game of Thrones,” the story of The Plantagenets takes listeners on a wild ride as the family leaves a trail of destruction across Europe and beyond, their personal feuds and psychodramas playing out on an epic scale.

The first episode, focused on the redoubtable Eleanor of Aquitaine, reminded me of the essentially “frontier” conditions of northern Europe in the 12th century. The landscape was quite wild outside of towns and the handful of cities, and banditry was rife. Knights more resembled the tough hombres that rode for the likes of the Hash Knife Outfit than they did the chivalrous heroes of romance.

Jones’ first foray into fiction, Essex Dogs, was released a few days ago in the UK, to rapturous reviews (from actual readers; I have largely ceased to pay attention to mainstream critics, so many of whom have sold out to ideological agendas). It’s not surprising that he’s hit the mark; Jones is a very, very good writer. Apparently, the swearing is as poetic as Deadwood.

The publisher is shooting every arrow in the quiver with this; booksellers of England have rolled out some rather stunning artwork to promote the tale. 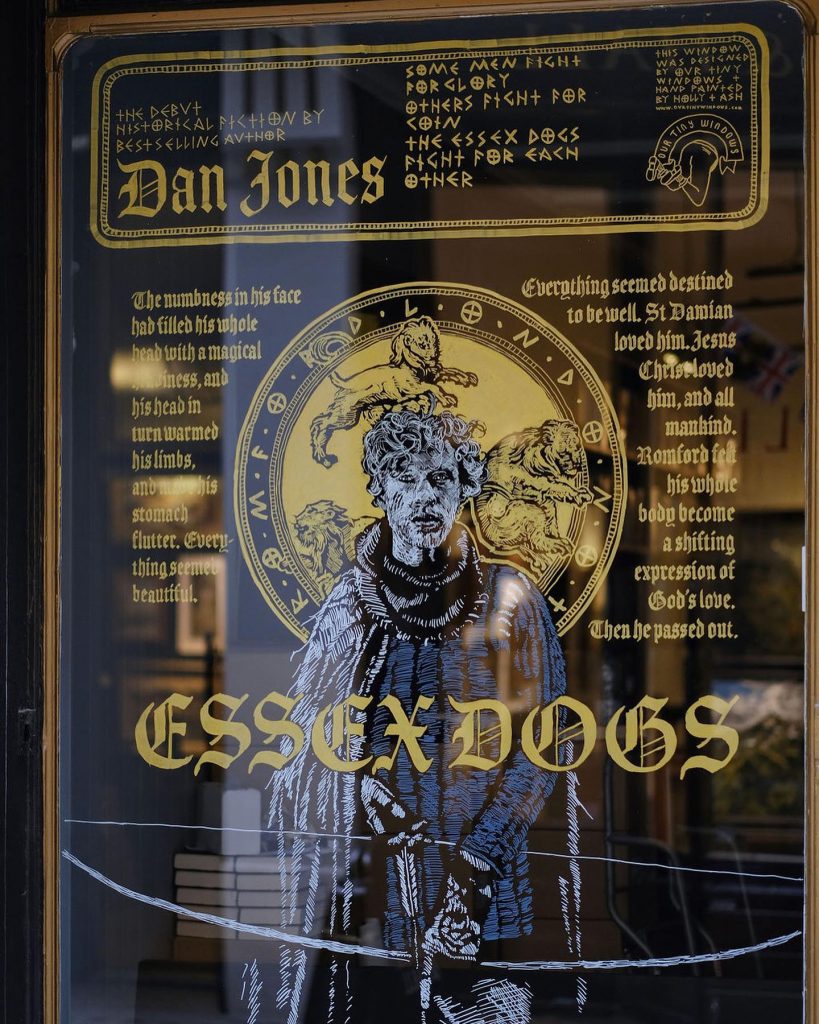 We have to wait till February 7, 2023, which is fine by me, since I’m buried in reading at the moment, as you know. But I will definitely be picking this one up. I have a February work trip, and methinks the Essex Dogs will make outstanding travel companions.

July 1346. Ten men land on the beaches of Normandy. They call themselves the Essex Dogs: an unruly platoon of archers and men-at-arms led by a battle-scarred captain whose best days are behind him. The fight for the throne of the largest kingdom in Western Europe has begun.

Heading ever deeper into enemy territory toward Crécy, this band of brothers knows they are off to fight a battle that will forge nations, and shape the very fabric of human lives. But first they must survive a bloody war in which rules are abandoned and chivalry itself is slaughtered.

Rooted in historical accuracy and told through an unforgettable cast, Essex Dogs delivers the stark reality of medieval war on the ground – and shines a light on the fighters and ordinary people caught in the storm.