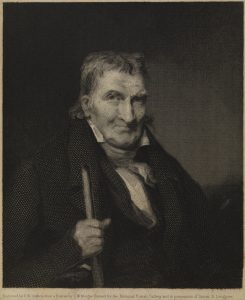 I can think of no better way to salute the memory of the great Frontier Partisan Simon Kenton than to dedicate a kick-ass Frontier Partisan Biathlon workout to his storied memory. Given that he’s being honored by a new sculpture and on the cover of Muzzleloader Magazine, I figured I’d better get after it. I decided to call my “event” The Kenton Brutality, a nod to Varusteleka’s annual Finnish Brutality, an action shooting challenge featuring kettle-bell work.

The Kenton Brutality is a simple single 24 kg (53#) KB workout. Twenty targets at 50 meters; 6 snatch-to-overhead push press for each target. (The push press is not a strict overhead press; it engages the legs). That’s a total of 120 reps, which is enough volume to smoke me pretty throughly. The trusty CZ 452 .22lr; iron sights — alternate offhand and kneeling for the shots. I added one additional element to the KB work — more on that below. First, a small tale:

One of Kenton’s most legendary exploits was saving the life of Daniel Boone when he was caught outside the walls of the settlement at Boonesborough, Kentucky, by a force of raiding Shawnees on April 24, 1777.

Kenton, all of 22 years old at the time — and going under the name of Simon Butler because he believed he had killed a man back in Virginia — was serving on his own hook as a freelance scout for Boone’s settlement. He had posted himself at the palisade gate as a couple of men went out to retrieve some horses about 70 yards off, grazing in a cornfield. Shawnee warriors jumped the men, who attempted to flee. A warrior caught up to one of them and split his skull with a tomahawk. As the warrior ripped off the trophy and waved it above his head, Kenton shot the Indian down. Boone and some other settlers sallied forth to engage the Shawnee raiders. That was a mistake. The bulk of the raiding party remained hidden in the treeline as the Kentuckians rushed past, then sprinted out to block their route of retreat to the fort. Boone shouted:

“Boys, we are gone—let us sell our lives as dearly as we can.” 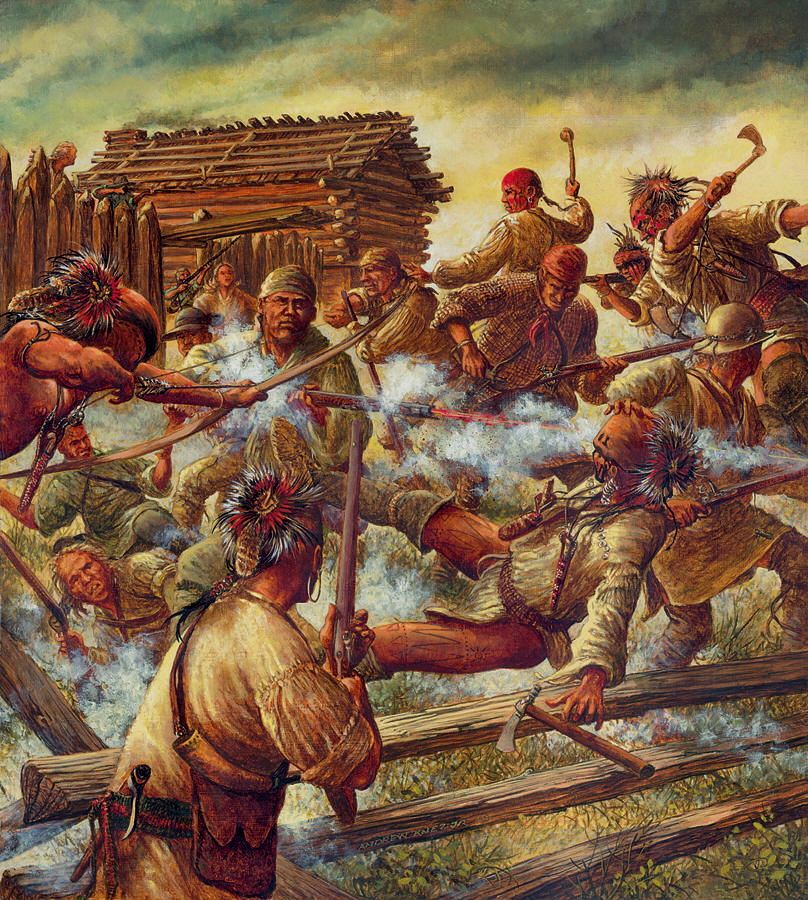 A musketball took Boone through the heel, ranged up and shattered his ankle, and put him on the ground. A warrior loomed over him with a tomahawk. Kenton, who had reloaded on the run — an exceptional skill with the long muzzleloading flintlock rifle — shot the Shawnee through the chest. He brained another with the butt of his rifle, scooped Boone up in his arms, and carried him back to the gates of Boonesborough, as the Kentuckians managed to fight their way back through the Shawnee raiding party. Boone’s daughter Jemima helped Kenton get her father inside the fort. Remarkably, while there were several wounded, only the one Kentuckian was killed in the scrap.

Boone’s wound was dressed, and he told Kenton:

“Well, Simon, you behaved like a man today. Indeed, you are a fine fellow.”

To honor that fine fellow’s epic effort, I added into The Kenton Brutality a heavy-bag-carry element — 100# 70 yards X 2.

I had planned to do this on Saturday to coincide with the unveiling of the new Kenton sculpture at the Old Washington Courthouse in Kaintuck, but I ain’t 22. I turn 57 in November, and have to make some concessions to age and recovery time. If I did The Kenton Brutality on Saturday, I’d be useless on Sunday on the tennis court…

And speaking of tennis courts…

Started listening to Dan Carlin’s final podcast in his series on Japan in World War II — Supernova in the East. He provides a vivid description of the Battle of Kohima, which took place as a huge Japanese force invaded Northeast India in the spring of 1944.  Operation U-Go was conceived as a throw of the dice by the Japanese, a bid to disrupt Allied operations in Asia — and to provoke rebellion in the Raj, threatening Britain’s position in India. An Anglo-Indian army backed by American airpower desperately defended the Imphal plain.

The fighting that ensued was incredibly arduous and brutal — close-quarters jungle fighting . The Battle of Kohima in a mountain town north of Imphal has been called “the Stalingrad of the Far East,” and historians Alan Millet and Williamson Murray argue that:

“Nowhere in World War II – even on the Eastern Front – did the combatants fight with more mindless savagery.”

Some of the most savage fighting took place over a tennis court next to the ruins of the District Commissioner’s bungalow. Anglo-Indian and Japanese forces were dug in literally at opposite ends of the tennis court, heaving grenades at each other. Savage indeed.

Carlin introduced me to one Lance Corporal Jack Harman, a classic eccentric British misfit, unsuited for ordinary soldiering, but spectacular when the bullets, shells and grenades started to fly. He was the heir to a landed fortune and a maverick gentleman ranker to the core — he specialized in scavenging for food in an environment where supplies were always short. 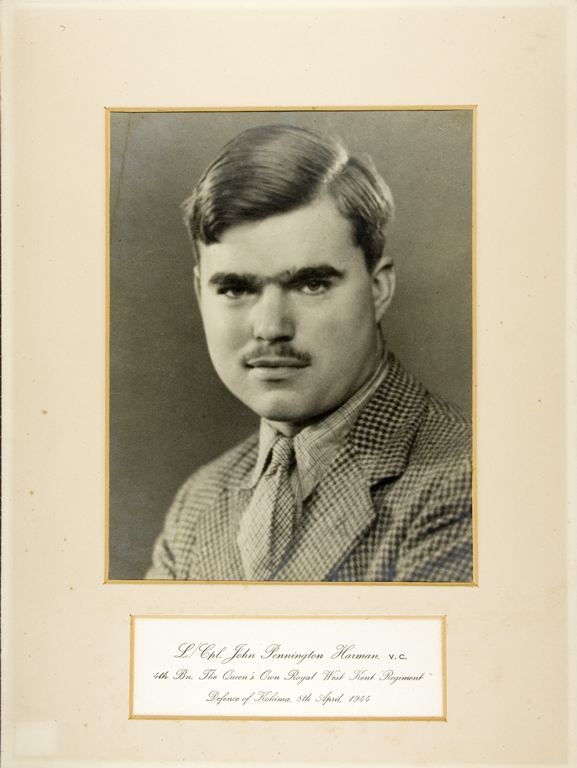 His actions in battle at Kohima Ridge, April 8-9, 1944, earned him the Victoria Cross. Posthumous.

No. 295822 Lance-Corporal John Pennington Harman, The Queen’s Own Royal West Kent Regiment (London, E.C.2). In Burma at Kohima on 8th April, 1944, Lance-Corporal Harman was commanding a section of a forward platoon. Under cover of darkness the enemy established a machinegun post within 50 yards of his position which became a serious menace to the remainder of his Company. Owing to the nature of the ground, Lance-Corporal Harman was unable to bring the fire of his section on to the enemy machine-gun post.

Without hesitation he went forward by himself and using a four second grenade which he held on to for at least two seconds after releasing the lever in order to get immediate effect, threw it into the post and followed up immediately. He annihilated the post and returned to his section with the machine-gun.

Early the following morning he recovered a position on a forward slope 150 yards from the enemy in order to strengthen a platoon which had been heavily attacked during the night. On occupying his position, he discovered a party of enemy digging in under cover of machinegun fire and snipers. Ordering his Bren gun to give him covering fire he fixed his bayonet and alone charged the post shooting four and bayoneting one thereby wiping out the post.

When walking back Lance-Corporal Harman received a burst of machine-gun fire in his side and died shortly after reaching our lines. Lance-Corporal Harman’s heroic action and supreme devotion to duty were a wonderful inspiration to all and were largely responsible for the decisive way in which all attacks were driven off by his Company.

Harman died in the arms of his commanding officer, and his last words are immortally badass: 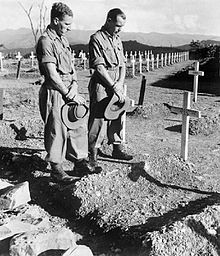 Two soldiers of the Royal West Kents at the grave of Jack Harman, VC.

“…probably one of the greatest battles in history… in effect the Battle of Burma [was] the British-Indian Thermopylae.”

My ladies’ favorite fictional Frontier Partisan, Jamie Fraser, will turn up in our neck of the woods. Well, Sam Heughan will, anyway. From The Scottish Daily Express:

Outlander star Sam Heughan is being targeted to play the lead role in the feature film adaption of video game Days Gone.

Heughan could play lead Deacon St John, a former motorcycle club member who fights to survive against the forces of despair and zombies in his quest to find his long lost love of his life – presumed dead. It will be set in the Pacific Northwest after a devastating global pandemic.

It is believed that the script written by Sheldon Turner will be an ode to motorcycle movies as the bike will be St John’s main mode of transportation.

Kinda cool, because the story of Days Gone is set here in Central Oregon. The maker of the game is headquartered in Bend. Those zombies are shambling across my home country…. 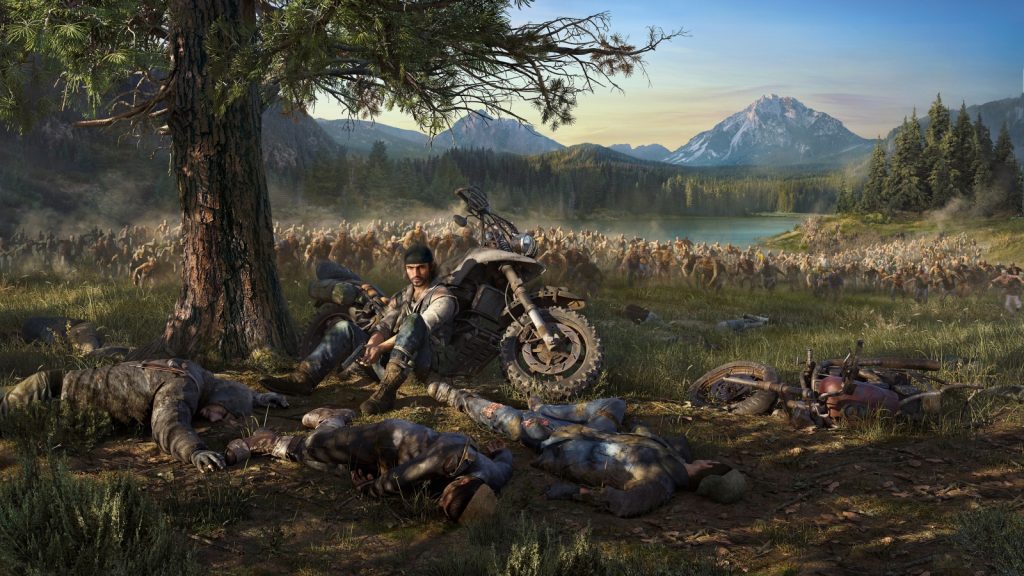