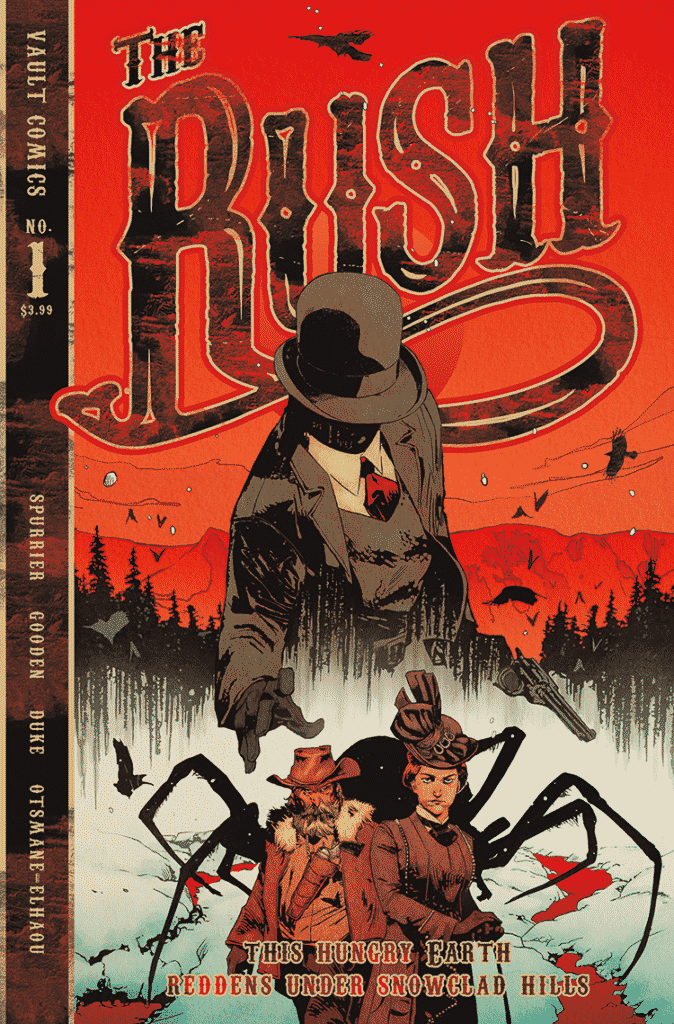 I picked up the first issue of The Rush largely because of the cover. It featured a man with a bowler riding a giant spider. I did not know quite what to expect when I read it. What I found was a tale of surreal horror set during the 1890s gold rush.

Created by British writer Si Spurrier and artist Nathan Gooden for Vault Comics, The Rush or the Hungry Earth Reddens Under Snowclad Hills was a pleasant surprise. The story follows Nettie, a woman searching for her son in the Yukon. This search takes her to a cursed town besieged by monsters including the aforementioned spider rider. Another is a strange winged creature that attacks anyone who leaves the town. The questions the first issue raises include the fate of her son and what exactly is happening in the town.

Spurrier seems to have done his homework. On his website, he says:

We’ve leaned delightedly into the slang and syntax of the era, we’ve referenced hundreds of photographs and first-hand accounts, we’ve borrowed lives and names and faces, all to build a truly faithful picture of this astonishing time and place…

…and then… into this world of greed, despair and detail, we’re layering a sediment of myths, monsters and horrors. Shadowed forests, scuttling giants and nightmares made flesh.

The writer and artist have created a Weird Western that is based on hard reality including the truths that few got rich during the rush and many died during their search. The surreal nature of the monsters is contrasted with realistic details of the time. It is odd to talk about realism in a horror story, but the truth is that realistic details make the story more relatable and thus more horrifying.

Nathan Gooden’s artwork captures both the real and the surreal. The rendering of a historically accurate (to my knowledge anyway) setting makes the surreality of the monsters more striking. They come across as truly alien.

While there are various revelations and twists in the plot, it is notable is that the weird events are never fully explained. This makes the comic more eerie. One should not read this comic if you want everything explained. Personally, I think it works better because of its lack of an easy explanation.

The monsters are not the common clichés of vampires, werewolves, or even Lovecraftian beings. They are original and essential to the story.

It would be glib to say that it mixes Jack London with H. P. Lovecraft, but it is a tale of cosmic horror in the gold rush. That said it is not precisely Lovecraftian in that it does not ape the gent from providence. Instead, it has its own style. 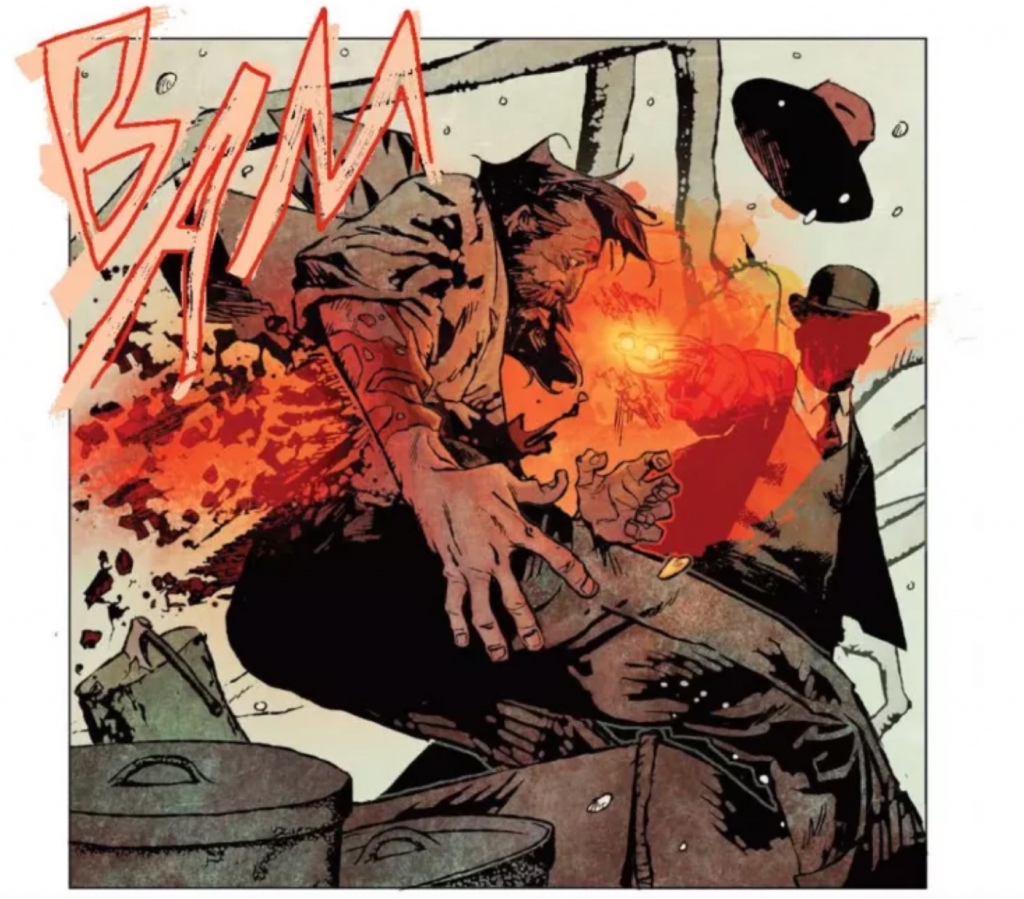 Nettie is a compelling protagonist. She is a strong, but fallible human being. The Strong Woman Protagonist is typically either blindly loved or blindly hated depending on ones politics. Frankly, to me it depends on how well it is handled. Sometimes this trope comes across cliché and forced, but in the Rush there is enough nuance to make Nettie interesting.

The story is ultimately a tale of motherhood. It is however a very fierce form of motherhood. Nettie is driven to find her son by what is a very primal desire: to protect her offspring. This drive is an essential theme to the story. It is a raw, unflinching story. One should not expect a heartwarming ending. Instead, it is a surreal tale of the horrors of both cosmic and intimately human. This is what differentiates it from the work of Lovecraft who had little interest in writing about human affairs.

Instead, The Rush is as much about human desires as it is about cosmic horror. It is also about human fallibility. In particular, greed and self-deception. In this way, it can be seen as a morality tale, albeit a weird, eerie, and twisted one.

In the end, it is a tale of fear, greed and love. 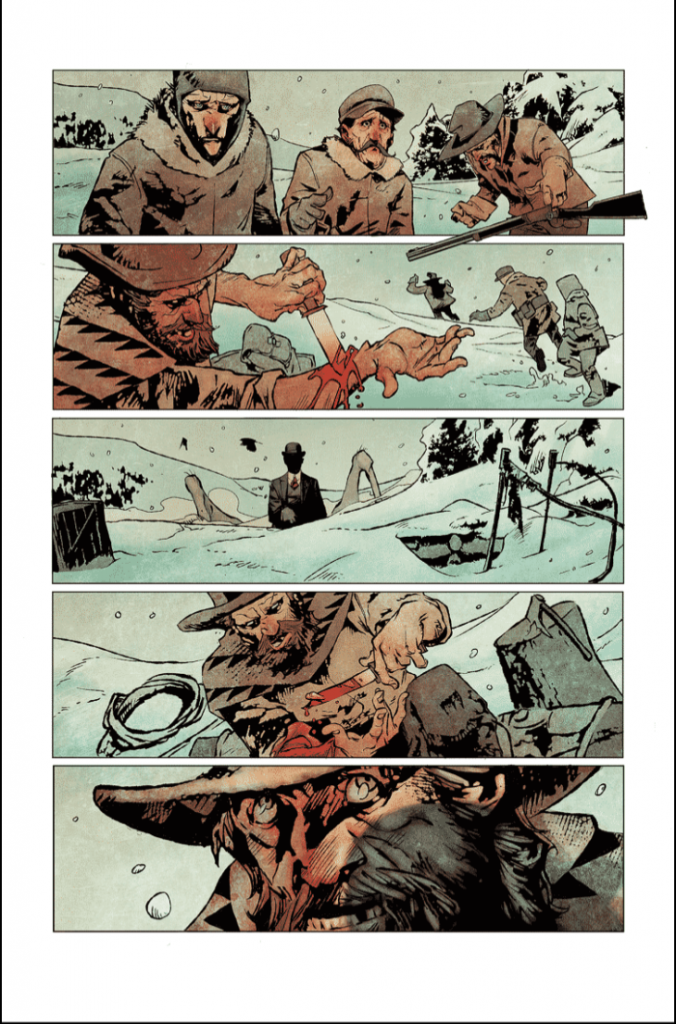