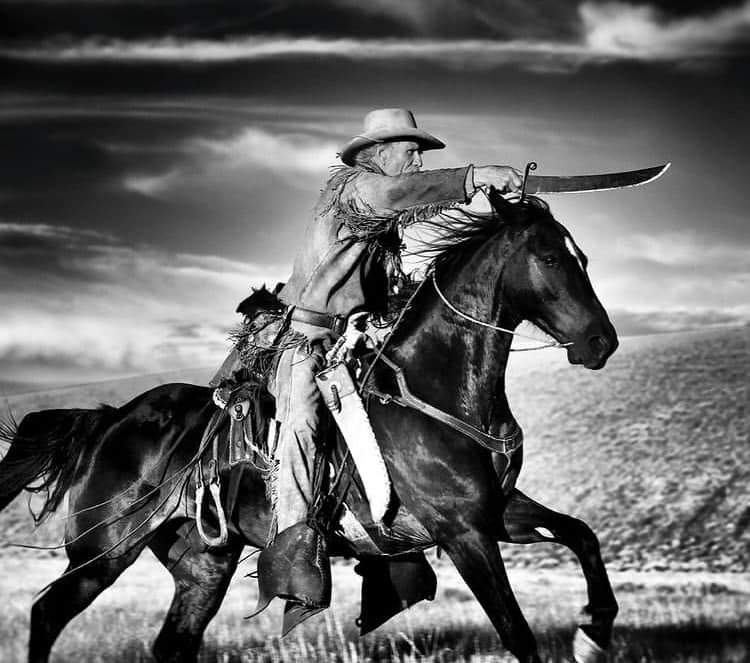 The thriller writer Jack Carr recently devoted an episode of his Danger Close podcast to negative reviews of his new bestselling novel In The Blood. It is often amusing to look on as critics miss the point. What’s relevant here is that many negative reviewers complained that the characters spent too much time talking about their weapons and gear. Carr’s response was to this effect:

I dunno — my friends and I talk about gear a lot.

I can offer an exhibit in Carr’s defense. Recently, I posted magnificent photographs by Nicole Morgenthau, who captures Mountain Man reenactment in fine style. Which photo garnered almost all of the attention and commentary, here, on FB, and in real space? The one above, naturally. Because that big knife/short sword is badass. I know it, you know it, and Ms. Morgenthau surely knows it.

Turns out, there is a fine little sidetrail to explore here. What the Mountain Man is wielding at the charge might be called several things. Commentor John Maddox Roberts identifies it as an espada ancha. VikingSword.com references the classic Spanish Military Weapons in Colonial America 1700 – 1821 by Sidney B. Brinckerhoff and Pierce A. Chamberlain, noting that:

The espada ancha or “wide sword” is a form characteristic of and unique to the northern frontiers of New Spain; that is, what is now northern Mexico and the southwestern United States. Brinckerhoff and Chamberlain (1972, p. 74 – 75) postulate that these swords evolved in the early 18th Century from 17th Century Spanish style civilian or hunting broadswords whose 76 to 92 cm. (30 to 36 inch) long blades came to be cut down to lengths between 45 and 66 cm. (18 and 26 inches). From their inception, espada anchas were used both by the mounted militia, as well as the the famed presidial lancers, and by civilians, particularly those in mounted occupations such as traders, travelers and cattlemen…

Beginning late in the 18th Century and accelerating in the early 19th Century, single edged variants of the espada ancha begin to appear and later predominate (example 3, below). The early double-edged espada anchas tend to be light in weight when compared with the slightly curved to straight single-edged variety which have broader, thicker blades (Adams 1984, p. 22 – 23, gives representative measurements) similar to the all-purpose guard-less machete of the campesino (peasant). While the earlier form most likely has a well made blade from a specialized workshop, these later forms often have fairly crude blades, most likely of local manufacture.

A Taos trapper might well arm himself with such a blade.

However, historian and illustrator David W. Rickman, believes that the identification of the later, heavy, short blades as espadas ancha is off the mark:

There has long been confusion about the meaning of the Spanish term espada ancha, though I cannot understand why. Many years ago it became attached to Mexican short swords that were usually carried on the saddle. Espada, of course, means “sword,” and ancha means “wide” or “broad.” So, a literal translation is quite simply, “broadsword,” not “shortsword.” In fact, from period literature we know that these short swords were called machetes — and still are by Mexican horsemen.

I dunno about that — it’s a sword (espada), not a brush chopper (though it would certainly do for that job). I think I’ll stick with espada ancha. Unless Machete objects…

Whether you prefer espada ancha or machete, it seems that this form of blade derives from the Northern European hunting sword, often called a cuttoe. The name is derived from the French couteau de chasse — hunting knife — though it is clearly a sword rather than just a large knife. Many officers in the American Revolution carried a cuttoe, some crude and others pretty darn elegant. 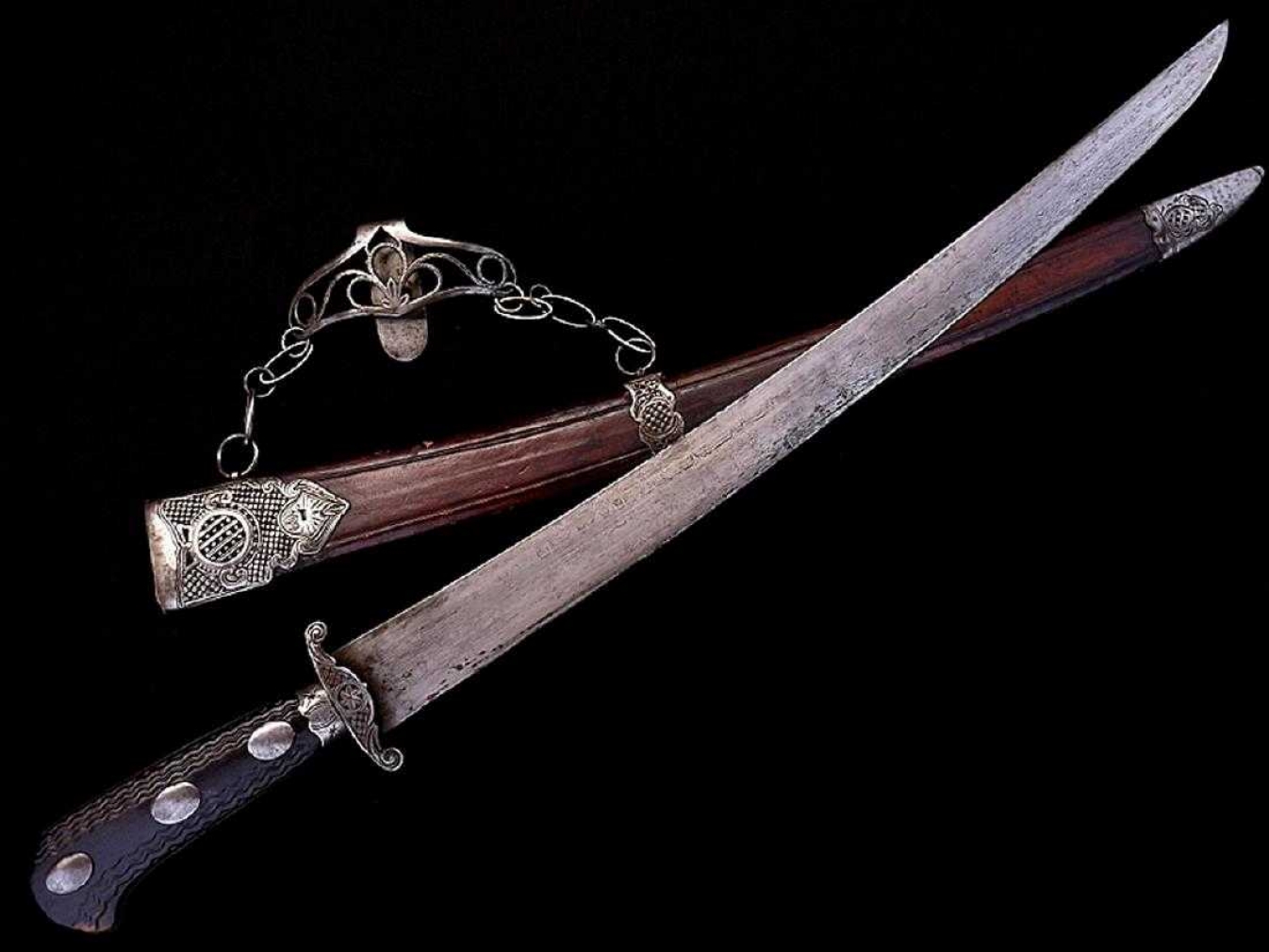 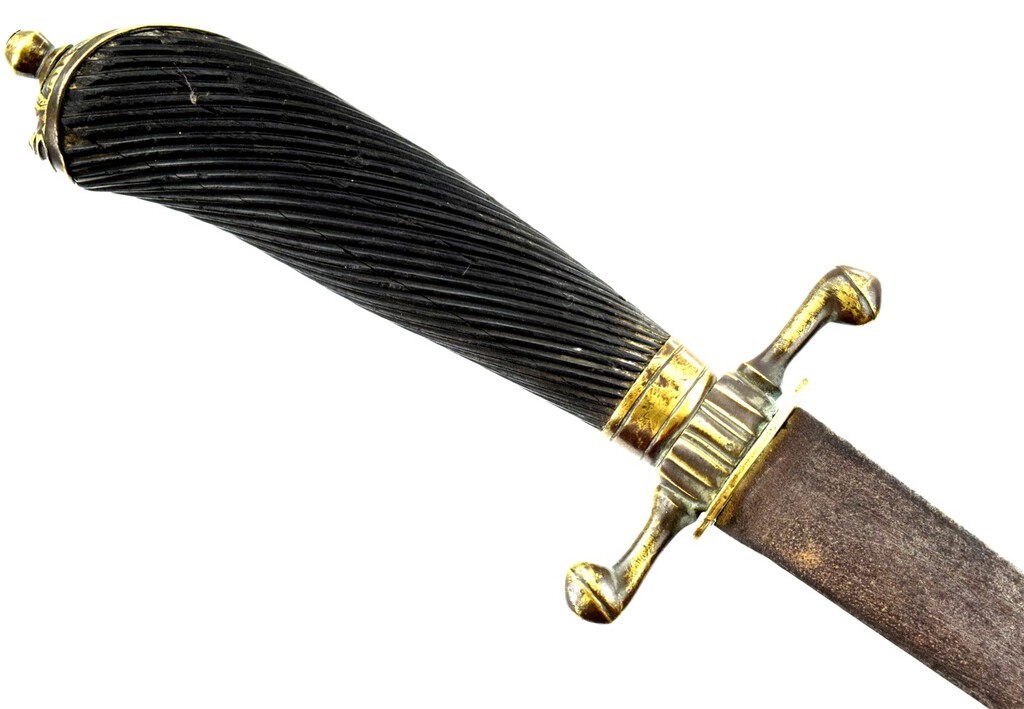 The cuttoe is not to be confused with the cuttoe knife, which was a large-bladed clasp knife.

In 1775, one William Cocke set off for Boonesborough, Kentucky, carrying a message from Transylvania Company proprietor Richard Henderson to the early settlers led by Daniel Boone. Cocke was…

“… fixed …off with a good Queen Ann’s musket, plenty of ammunition, a tomahawk, a large cuttoe knife, a Dutch blanket, and no small quantity of jerked beef.”

First of all, let us note that he carried a musket, not a rifle — and a 60-year-old model at that. And a ’hawk and a clasp knife. A Dutch blanket was a particular pattern of heavy woolen blanket, popular on the frontier and among soldiers. It may or may not have been made in its original homeland Holland — by the late 18th Century Dutch blankets were also made in England and Ireland.

So here we are, talking gear. As one does. Probably gonna garner negative reviews*.

Anyway, whatever you call that Mountain Man’s blade, it’s badass and every single one of us wants one. It is known.

*Carr’s first novel, The Terminal List, is now a series on Amazon Prime. Critics hate it; viewers seem to love it. I’m two episodes in and it’s solid. It’s not going to displace The Old Man in my current viewing obsessions, but I like it. Once again, I think the critics have missed the point. Misread the wind, got the yips, jerked the trigger — missed by a mile. It’s almost as though they were predisposed to hate it or something. Hmmmm…

Thing is, nobody really cares about what professional critics think — the Internet has completely democratized opinion on such things.