It is known that I am hard on gear and clothing. Custom hatmaker Gene Baldwin feigns dismay every time he sees me in my Baldwin Boss of the Oregon Trail hat — soiled, sweat-stained, its precise pencil roll brim busted down and the binding frayed. I say feigned, because he also appreciates the fact that I wear that hat Every. Damn. Day. In forest, field and desert. It has to be brutally hot before I’ll switch to straw or a boonie hat. It’s Stuff That Works. 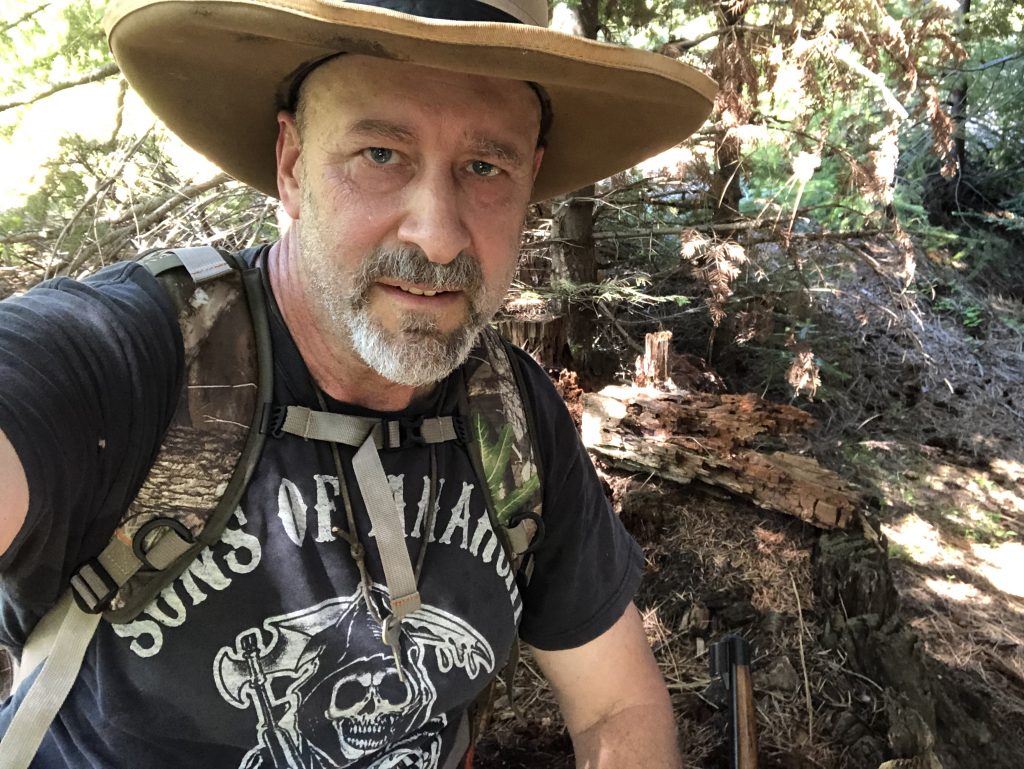 My truck is no pavement princess; I have no guns that are safe queens. And, yeah, I have worn out or destroyed more than a normal share of Wrangler Riggs work pants and Carhartts, which are my everyday and hiking wear. CLP stains, it turns out. And mud and blood and ink, and then there’s shooting from the kneeling position on cinders… You get the picture.

Recently, I asked Marilyn to stop at Sportsman’s Warehouse in Bend and pick me up a new pair of Carhartts, which is when she told me I need teflon pants. She came back with the Carhartts — and a pair of pants from 5.11 Tactical. She was most pleased:

“They have teflon in ’em! They’re bitchin!”

(You can take the girl out of SoCal, but you can’t take the SoCal out of the girl). I have several pieces of 5.11 Tactical gear. A belt that will outlast me. My push-pack, which carries my newsman’s tool kit. They make great gear. Expensive gear. I asked how much these teflon pants cost.

“They were expensive — but they’re bitchin!”

And they are. I really don’t love the tactical-everything branding trend. You can probably get “tactical toilet paper“ somewhere. As my friend Craig Rullman will tell you, “tactical” is a mindset, not a market category. So I refuse to call them “tactical pants.” But damned if they ain’t the best hiking-and-Frontier-Partisan-Biathlon pants I’ve ever worn: comfortable, great for movement — and they’ve been through a manzanita thicket or two and that teflon is stuff that works; stuff that holds up. 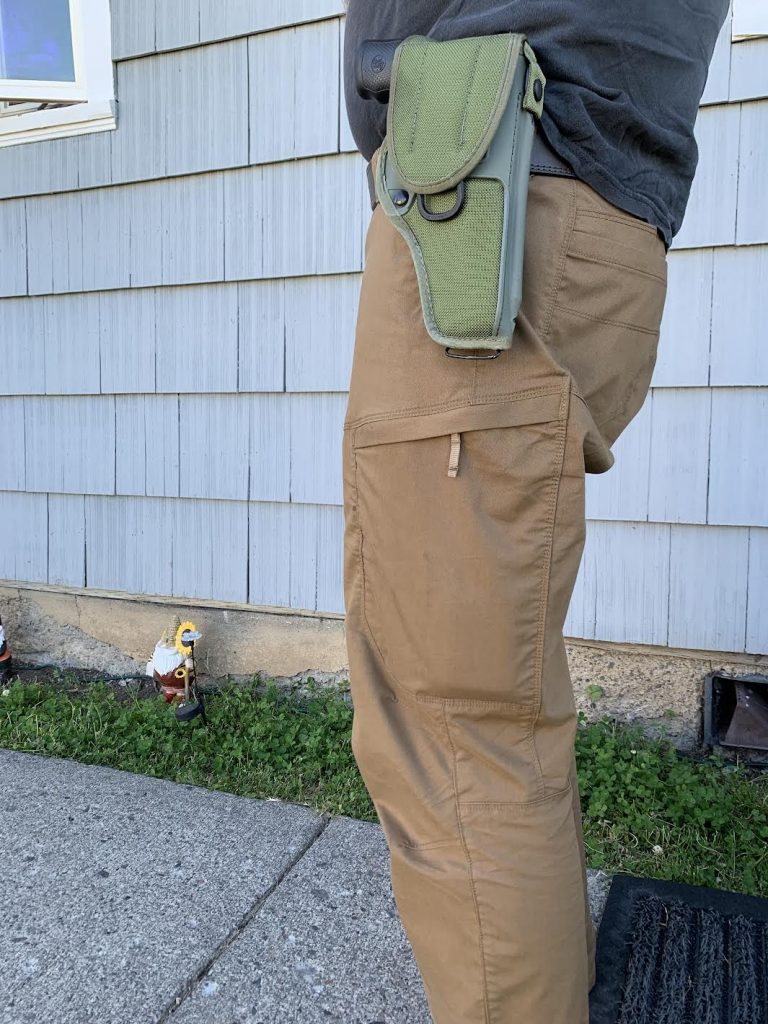 My Father’s Day present could also be branded “tactical” — a Bianchi Universal Military Holster for the revolvers. My old leather Hunter holster is still in the fight, but it’s 30+ years old, and  I don’t really trust it on the trail. The Bianchi is all about retention — not just the flap; it’s one snug holster. I carry a Springfield XD 9mm in town, but I MUCH prefer my .357 S&W 686 on the trail, even though it’s considerably heavier.

To be honest, I’m a lifetime acolyte of The Cult of the Revolver. I am competent with the XD, but I’ll never think of it as my “gun to ride the river with.”

The Bianchi carries the Smith & Wesson tight and high on the hip; no flapping around. The weight doesn’t signify. It’ll hold either the S&W 686 or its little brother the S&W 617 .22, depending on what I’m up to. Stuff That Works.

Speaking of firearms… Somebody posted on the Rigby Facebook page pix of the Rigby .416 once carried by the legendary Kenya Game Warden Bill Woodley. You all know how I love a workhorse rifle — the kind of stuff you don’t hang on a wall. 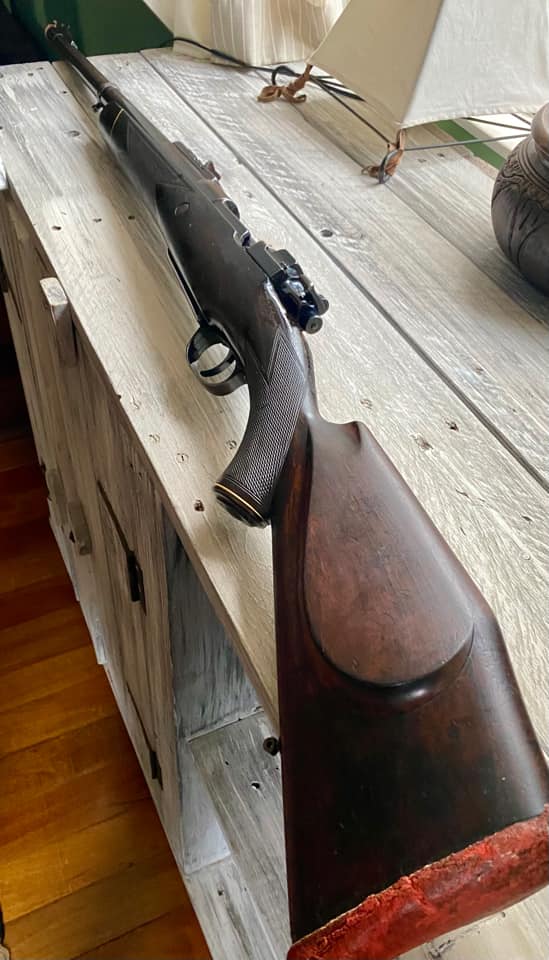 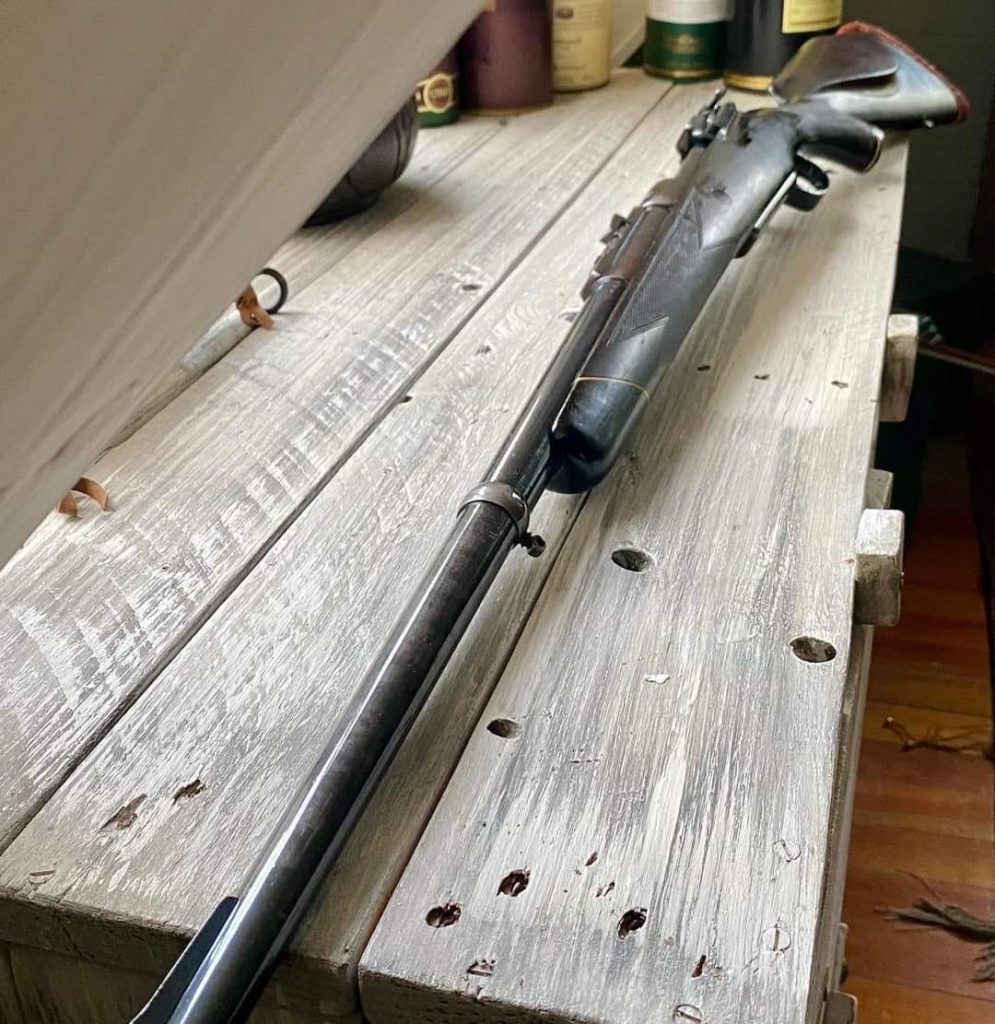 The Old Man on FX (streaming on Hulu) is really, really good.

Creator and producer Jonathan Steinberg was the primary creative force behind Black Sails, which is my all-time favorite TV show. His imprint showed up in a major way in Episode 2 of The Old Man, as the titular character “Dan Chase” (Jeff Bridges) has dinner with his new landlady, Zoe (Amy Brenneman). She tells him two different versions of the story of the collapse of her marriage — one in which she is the victim of a narcissistic husband, the other (which she fears might be more accurate) in which she is largely to blame, perhaps the villain of the piece.

“Why would you tell the story that way?” Chase asks. 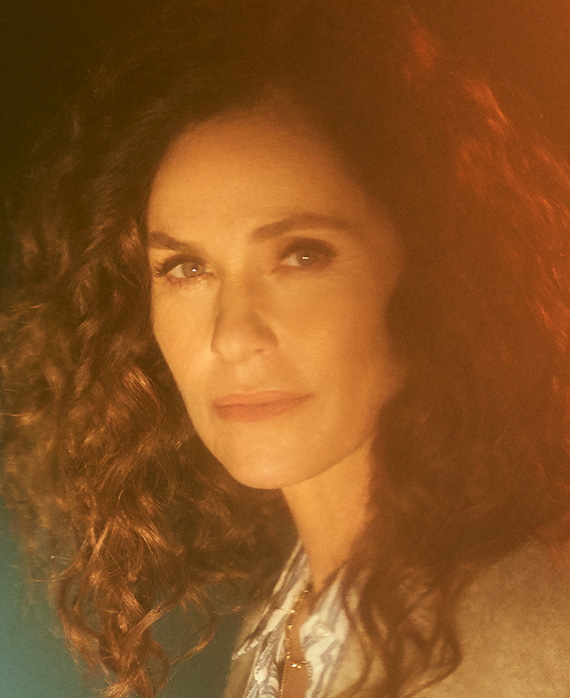 That is so Steinberg, so Black Sails. That show was a story about storytelling: how we shape ourselves — and sometimes the lives and fates of lovers, friends and enemies — by the stories we tell ourselves and the stories we project out into the world. This is a theme that resonates with me right down to my bones.

The action is brutal and, in Rullman’s perfect word for it, desperate. We don’t yet know what the origin of the existential threat to “Dan Chase” is, but we feel it. And, since Steinberg’s bloody fingerprints are all over this thing, we can expect to get more than one completely convincing story about how and why a CIA operative went underground for 30 years and has now been forced out on the run.

Also, there’s a pair of Rottweilers.