Another great frontier historian has gone up the trail. Frederick Nolan was a key historian of the Lincoln County War. His book The West of Billy the Kid is an essential text, and his The Lincoln County War: A Documentary History revealed that bloody episode as the battle for commercial domination that it was.

I just learned a couple of hours ago that English author, Fred Nolan, had passed away. He was 93  No other details.  You may already know.  But at last he is at peace.  Another grand fellow, author, friend and historian gone over the Rainbow Bridge.  I have known Fred for almost forty years.  He was funny, helpful, and amazing in the knowledge that he developed, shared and wrote about regarding the LCWar, Billy the Kid and the mosaic of characters we have come to love and hate in that drama of control, evil, and some good too known as New Mexico, Lincoln County and Historic Lincoln itself.  The image below of Fred is my favorite.  He loved our region and every year would visit our country along with his lovely wife, Heidi.  Our daughter, Katherine, and I visited with Heidi and Fred in England in 1989.  Wow, did we have a grand time as he showed us his home, and his native land. 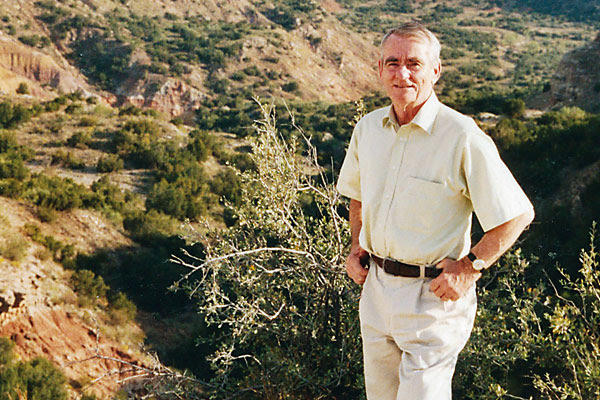 He shall be missed but we are all thankful he came our way.  Fred loved the rugged landscape and also the two most visited NM Historic Sites in NM (Lincoln and Fort Stanton)  He understood their importance and he was thrilled when Fort Stanton finally was established as a State Monument. His numerous articles and books will be part of his legacy.
Fred participated in the McSween Site Dig in Lincoln during the 1980’s loving every minute of that time.  He also played the piano with a vengeance and with a special style and grace depending on the music.  He was a giant and now, he is gone.  Vaya con Dios amigo.

Nolan was 93, and like the recently-departed Robert Utley, he lived a long, full life and left giant footprints on the trail of frontier history.
Previous Post: « Rigby Farquharson
Next Post: Following The Fiddle »