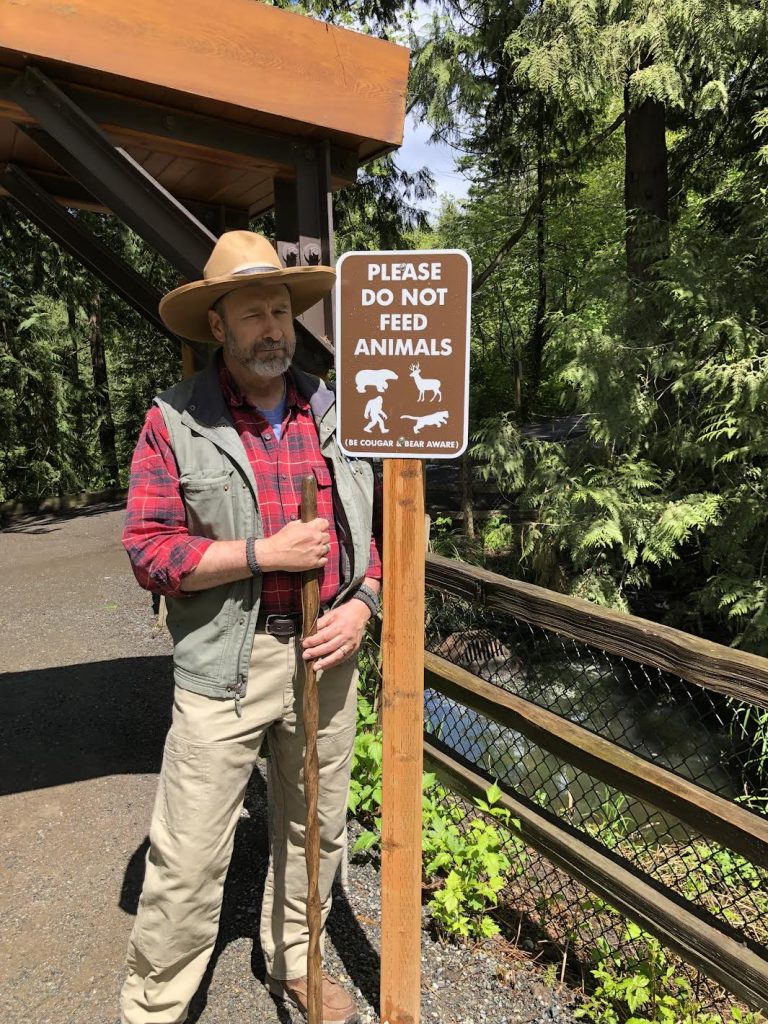 Lady Marilyn and I conducted a lightning raid across the mountains Thursday night — part of a secret mission conducted on behalf of Frontier Partisans. More, I cannot say… yet.

Conditions were more adventurous than one expects in the middle of May. Snowstorm across Santiam Pass  and down the west side of the Cascades to Marion Forks. Visibility was NOT good, and road conditions were sketchy from the Santiam Junction west. But the trusty Subaru got us through and on up into Washington State. 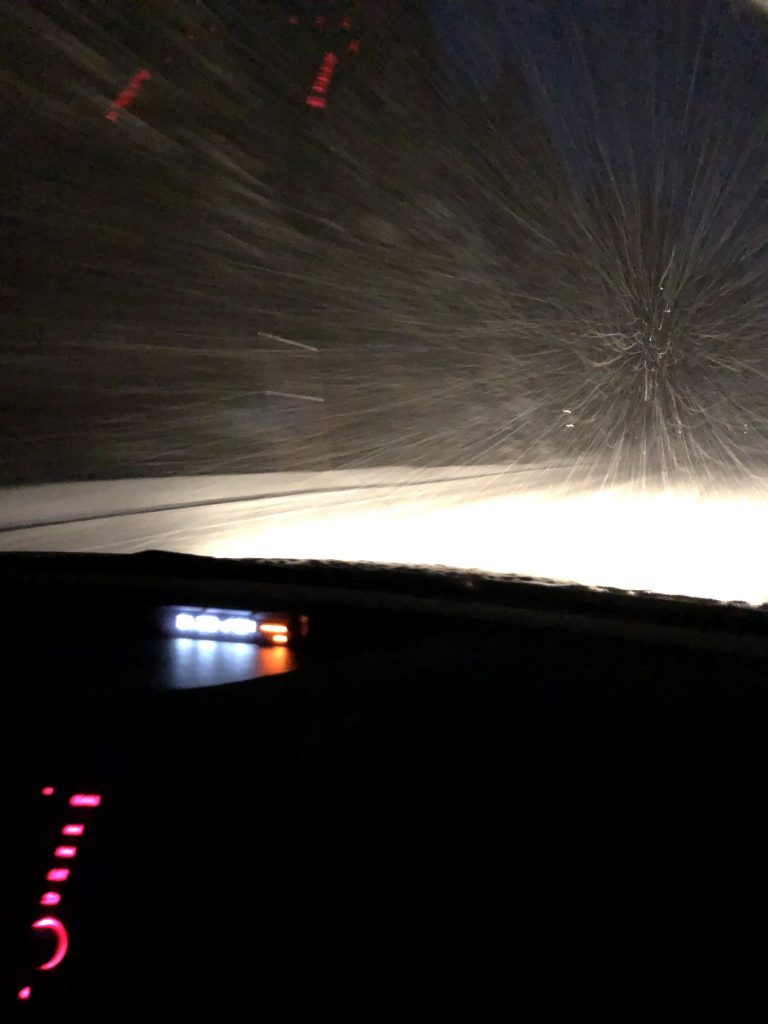 The core mission was accomplished on Friday, so Saturday was open for sidetrailing to Snoqualmie Falls and Salish Lodge, which is some mighty “boujie” (or is that booshway?) accommodations for a Frontier Partisan. Waugh! Salish Lodge & Spa is owned by the Snoqualmie Indian Tribe., for whom the Falls and the surrounding area are sacred ground.

The Falls are spectacular — 269 feet of vertical drop, which is over 100 feet taller than Niagara Falls. The country ’round is verdant — a green world of Doug Fir, Cedar, Alder, Big Leaf Maple; huckleberry bushes and Oregon grape. It’s all quite developed and has been for over a century, with the first hydroelectric plant being built in 1898. It’s not wild country, but it sure is pretty. 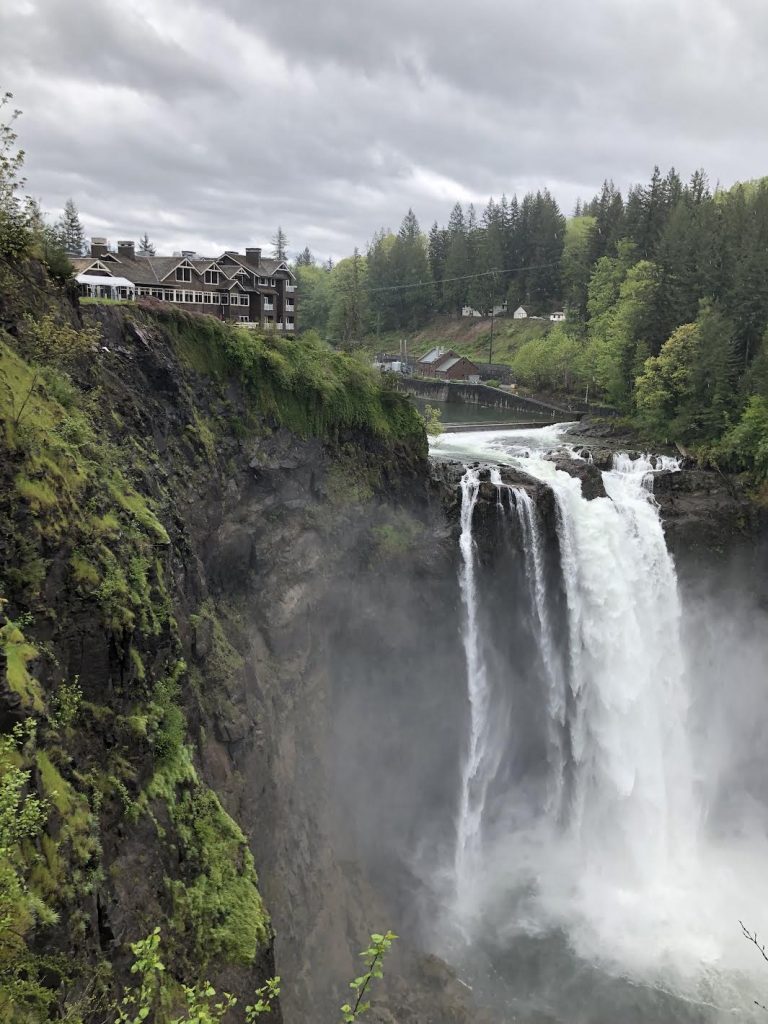 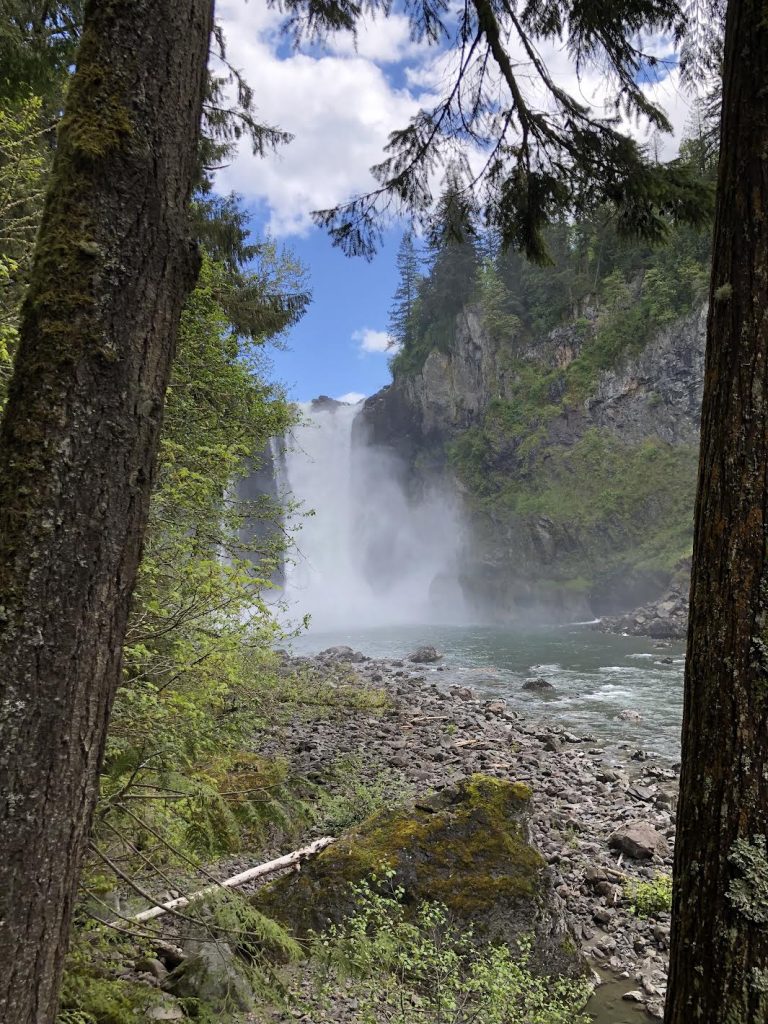 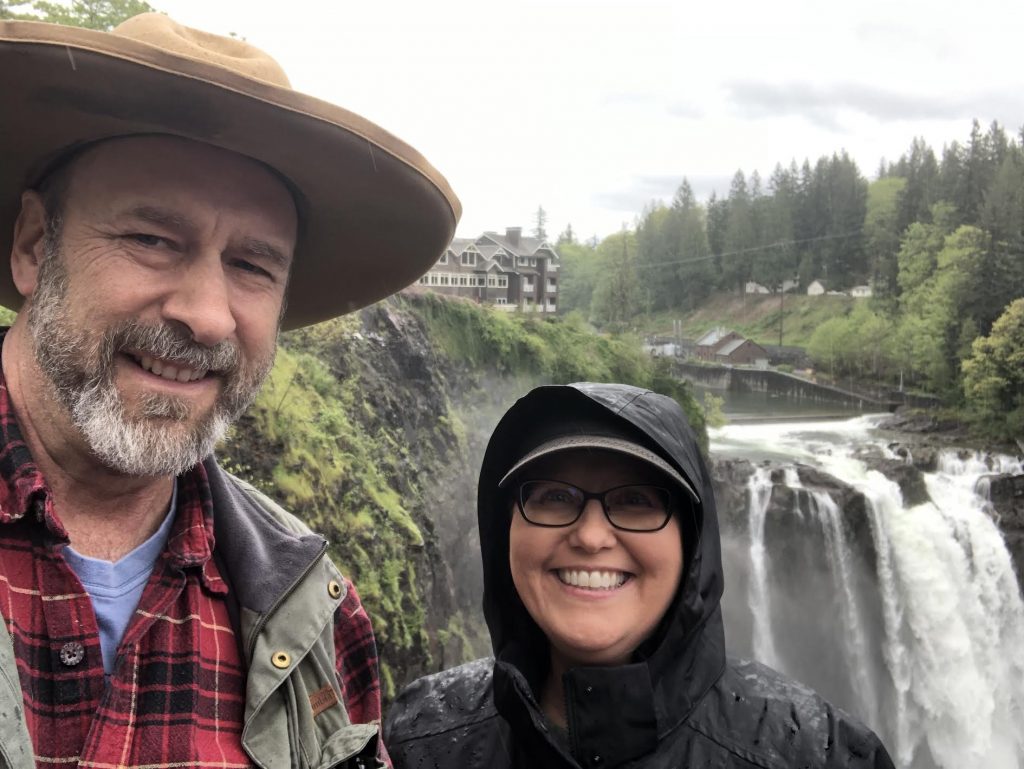 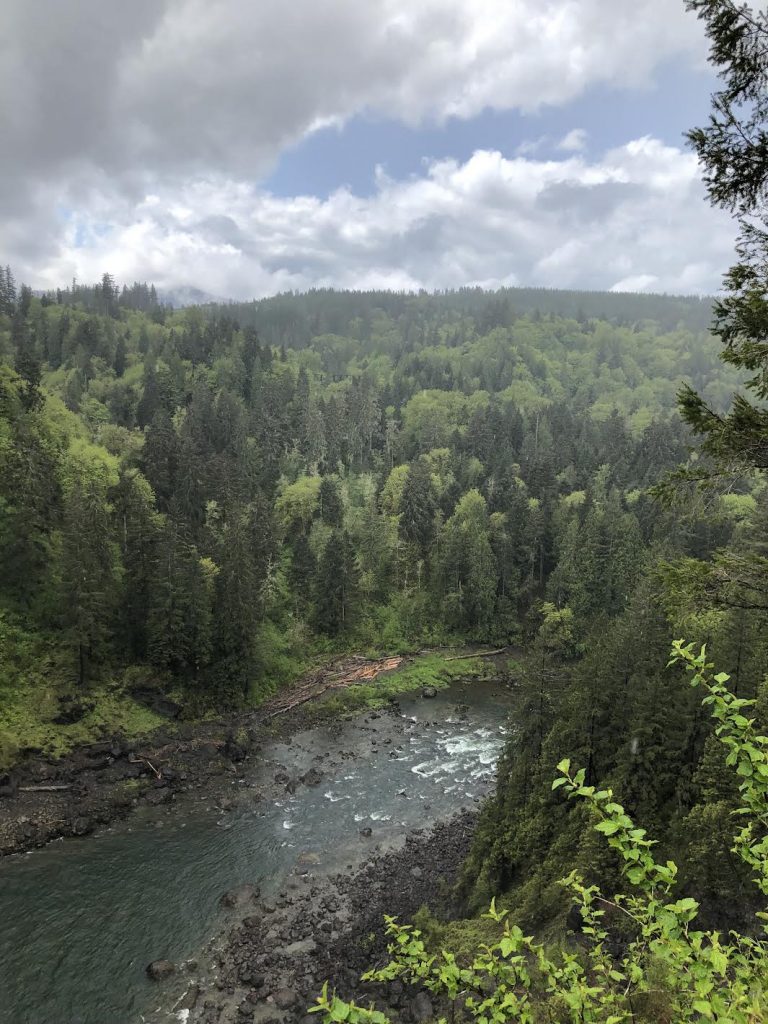 We had a perfect weather day. It wouldn’t be right to be in this part of the PNW without rain, and it came down like a cow pissing on a flat rock at times. It annoys Lady Marilyn how much I love that. But then we got sunshine for our ramble. The many interpretive signs along the trail included the common name for plants and trees, the scientific name, and the Snoqualmie name, along with a notation as to what use the native people put the vegetation, from foodstuffs to flute stems. Very well done. 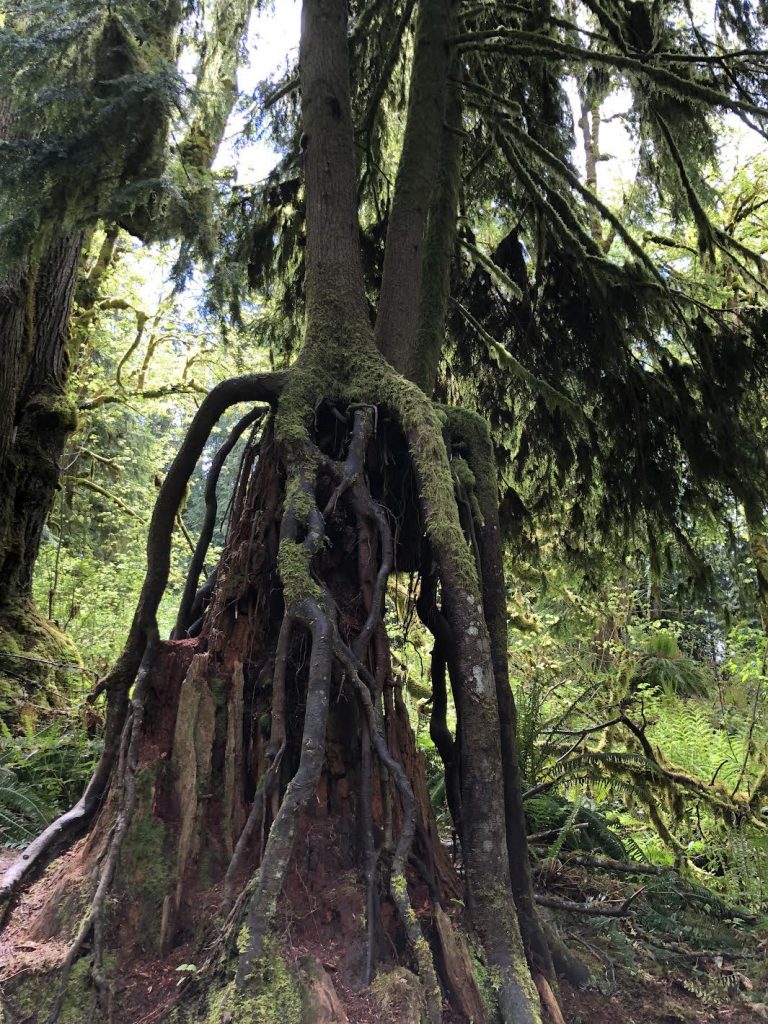 I am utterly fascinated by the phenomenon of “Nurse Trees,” which we don’t see on the east side of the Cascades. These trees are growing right over — and out of — rotting old growth stumps. Just astounding. 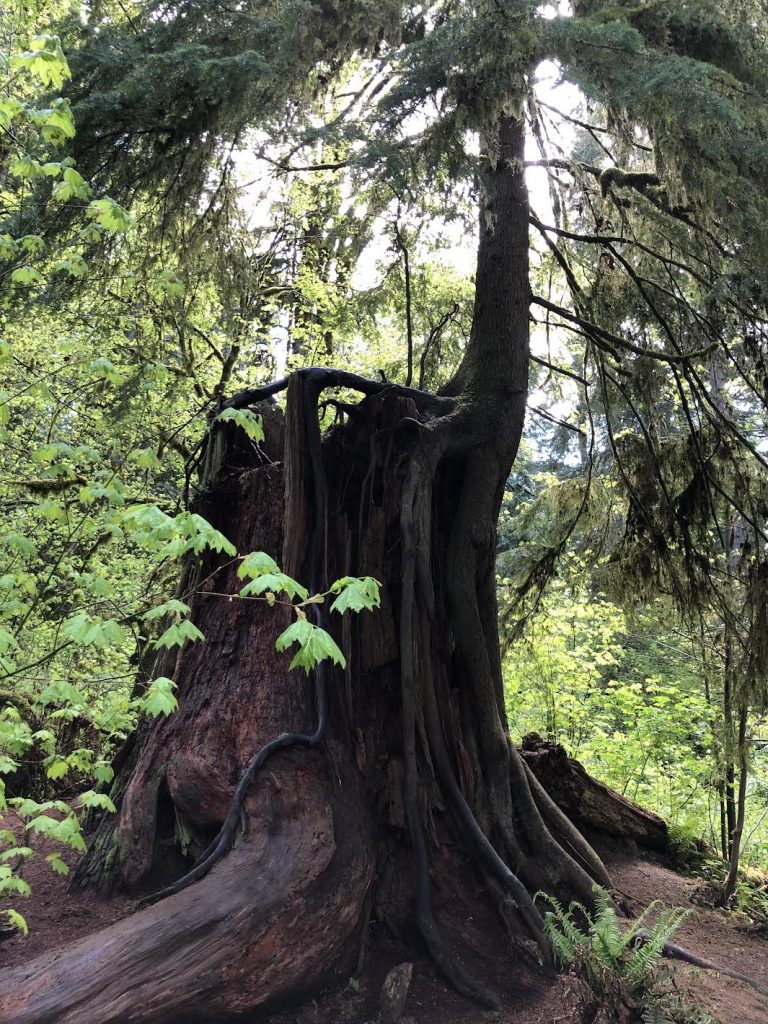 As in most places in the Pacific Northwest, logging was once the major industry here, and where there’s logging, there’s trains. I love trains. We drove down to the Railroad Museum, past a graveyard of derelicts that called to me so clearly that I had to stop along the highway and commune with them for a few minutes. 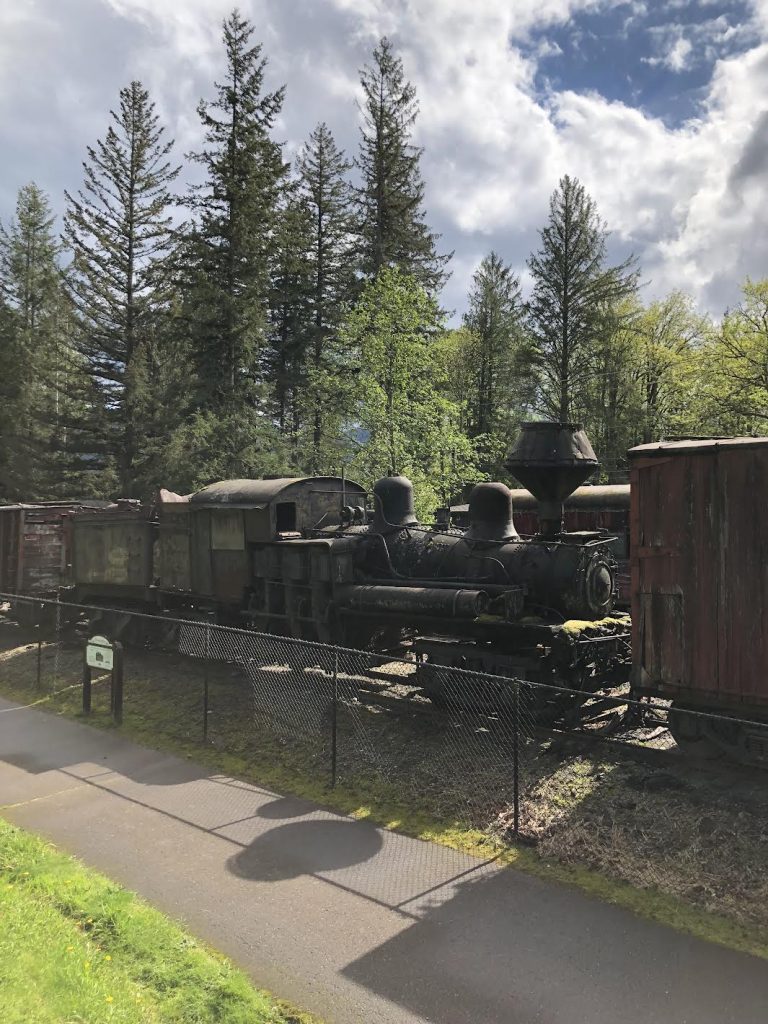 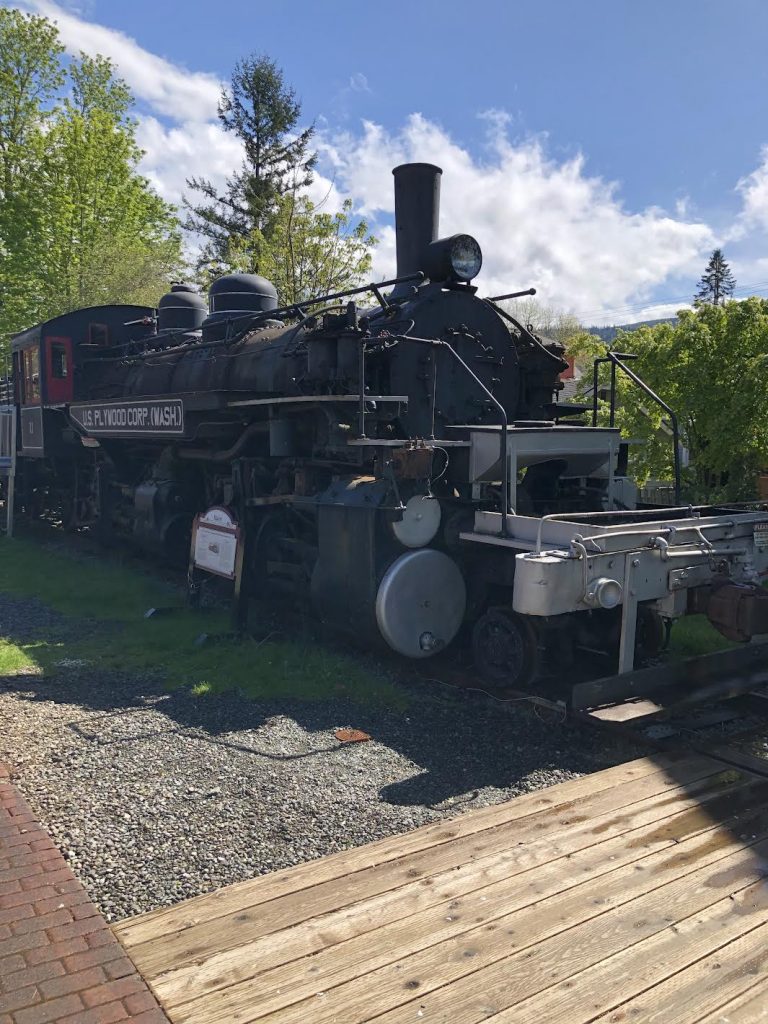 For some reason, trains always evoke for me the Bloodlands of the Wild East. All that reading on the Eastern Front of World War I and the Russian Civil War, I suppose. Every time I encounter trains, I think of the scene in Babylon Berlin (1929) where a gang of Communist partisans hijack a train heading through a forest into Germany. It’s beautifully shot and just trips my trigger.

Speaking of waterfalls, Jarod Gatley (that’s the soon-to-be-son-in-law) produced a mighty fine video of a film shooting expedition to Chush Falls, near home. Check it out:

I may have mentioned that patience is among my lesser-developed virtues. Christopher Othen is taking direct aim at that gap in the body armor with the announcement that his The Men From Miami is out in the UK. I could order it from the Amazon UK (and pay the chonky shipping) and get it months before the October/November U.S. release.

I could do that. Probably shouldn’t, right? It’s not like I don’t have plenty on the docket for FP reading. I don’t need to do that. I can wait. Right? Somebody intervene here…