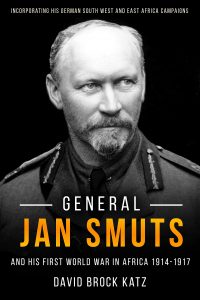 Smuts, a South African who led a major commando raid into the Cape Colony during the Boer War, was placed in charge of the British campaign in East Africa, tasked with taking and controlling the territory that is now Tanzania, and neutralizing the brilliant German General Paul von Lettow-Vorbeck. It was an extremely arduous campaign, with rugged terrain and rampant disease depleting Smuts’ ranks. It was not regarded as a success, and Smuts’ abilities — like those of almost all World War I generals — have been held in low regard. A new book is pushing back against that assessment, which I think is a damn good thing. I’ve always felt that Smuts did pretty well with a near-impossible task.

General Jan Smuts and his First World War in Africa, 1914-1917: Incorporating his German South West and East Africa Campaigns by David Brock Katz will hit U.S. shelves in June. I suspect this will have to have a place — right next to Pretorius’s memoir on the Frontier Partisan Bookshelf.

A new assessment of Jan Smuts’s military leadership through examination of his World War I campaigning, demonstrating that he was a gifted general, conversant with the craft of maneuver warfare, and a command style steeped in the experiences of his time as a Boer general.

World War I ushered in a renewed scramble for Africa. At its helm, Jan Smuts grabbed the opportunity to realize his ambition of a Greater South Africa. He set his sights upon the vast German colonies of South-West Africa and East Africa – the demise of which would end the Kaiser’s grandiose schemes for Mittelafrika. As part of his strategy to shift South Africa’s borders inexorably northward, Smuts even cast an eye toward Portuguese and Belgian African possessions.

Smuts, his abilities as a general much denigrated by both his contemporary and then later modern historians, was no armchair soldier. This cabinet minister and statesman donned a uniform and led his men into battle. He learned his soldiery craft under General Koos De la Rey’s tutelage, and another soldier-statesman, General Louis Botha during the South African War 1899–1902. He emerged from that war, immersed in the Boer maneuver doctrine he devastatingly waged in the guerrilla phase of that conflict. His daring and epic invasion of the Cape at the head of his commando remains legendary. The first phase of the German South West African campaign and the Afrikaner Rebellion in 1914 placed his abilities as a sound strategic thinker and a bold operational planner on display. Champing at the bit, he finally had the opportunity to command the Southern Forces in the second phase of the German South West African campaign.

Placed in command of the Allied forces in East Africa in 1916, he led a mixed bag of South Africans and Imperial troops against the legendary Paul von Lettow-Vorbeck and his Shutztruppe. Using his penchant for Boer maneuver warfare together with mounted infantry led and manned by Boer Republican veterans, he proceeded to free the vast German territory from Lettow-Vorbeck’s grip. Often leading from the front, his operational concepts were an enigma to the British under his command, remaining so to modern-day historians. Although unable to bring the elusive and wily Lettow-Vorbeck to a final decisive battle, Smuts conquered most of the territory by the end of his tenure in February 1917.

General Jan Smuts and His First World War in Africa 1914-1917 makes use of multiple archival sources and the official accounts of all the participants to provide a long-overdue reassessment of Smuts’s generalship and his role in furthering the strategic aims of South Africa and the British Empire in Africa during World War I.