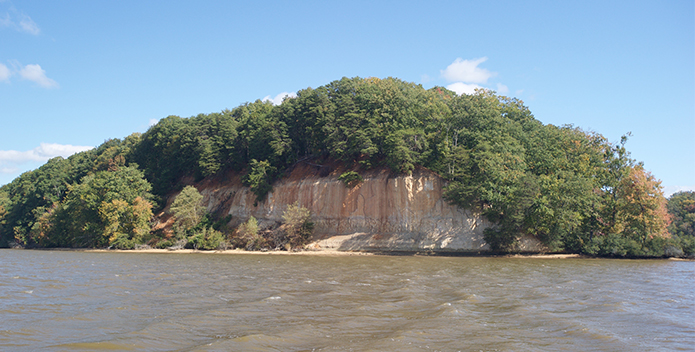 A remarkable and beautiful spot in Virginia, known as Fones Cliffs, where Captain John Smith of Jamestown skirmished with Rappahannock Indians in one of the first hostile encounters in a long, fraught history of English/native contact, is now back in indigenous hands.

In 1608, as Captain John Smith and his crew sailed and rowed their shallop up the Rappahannock River, Rappahannock warriors gathered on these high cliffs and in the marshes below to ambush him. According to Smith’s diary, he and his crew defended themselves from the warriors’ attack with shields, and then fired a return volley. Ultimately, they were able to pass by without casualties. Whether the Rappahannock suffered any losses is unknown. The skirmish, however, served notice that not all welcomed their presence in the New World.

By 1649, the Rappahannock villages above the cliffs had been displaced by the English. The area has, as of Friday, April 1, been returned to the jurisdiction of the Rappahanncok Tribe. 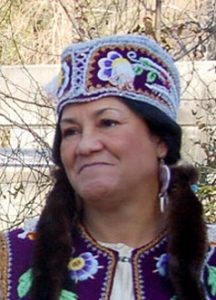 “We have worked for many years to restore this sacred place to the Tribe. With eagles being prayer messengers, this area where they gather has always been a place of natural, cultural and spiritual importance.”

Per the Department of the Interior:

Chance, Va. — Secretary of the Interior Deb Haaland and U.S. Fish and Wildlife Service (Service) Director Martha Williams today celebrated the Rappahannock Tribe’s re-acquisition of 465 acres at Fones Cliffs, a sacred site to the Tribe located on the eastern side of the Rappahannock River in Virginia.

Prior to a community celebration event, Secretary Haaland met with Tribal and community leaders, Service employees, and conservation organization leaders to discuss the natural and cultural significance of the cliffs, and to highlight the Department’s commitment to partnering with Tribal communities and honoring its federal trust responsibility.

“The Department is honored to join the Rappahannock Tribe in co-stewardship of this portion of their ancestral homeland. We look forward to drawing upon Tribal expertise and Indigenous knowledge in helping manage the area’s wildlife and habitat,” said Secretary Haaland. “This historic reacquisition underscores how Tribes, private landowners, and other stakeholders all play a central role in this Administration’s work to ensure our conservation efforts are locally led and support communities’ health and well-being.”

These efforts help advance the Biden-Harris administration’s America the Beautiful initiative and ongoing efforts to support local and Tribal-led efforts to conserve, connect, and restore lands and waters.

Fones Cliffs is located within the authorized boundary of the Rappahannock River Valley National Wildlife Refuge. The land will be owned by the Rappahannock Tribe and be publicly accessible and held with a permanent conservation easement conveyed to the Service. Through the generosity of the family of William Dodge Angle, M.D., and with support from the National Fish and Wildlife Foundation through a grant from Walmart’s Acres for America Program, Chesapeake Conservancy purchased the land and donated the easement to the Service. The fee title was donated to the Rappahannock Tribe, which intends to place the land in Trust with the Bureau of Indian Affairs.

“Relationships, knowledge-sharing and co-stewardship with Indigenous peoples are essential to the Service’s mission,” said Service Director Williams. “We have the direction and tools to ensure collaboration between the Service and Tribes, and to protect cultural, trust and treaty resources on Service lands in support of our shared priority of conserving fish, wildlife and their habitats.” 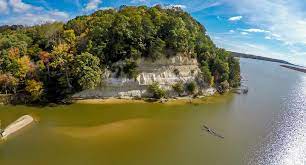 Fones Cliffs, a four-mile stretch of white diatomaceous cliffs rising over 100 feet above the Rappahannock River, is the ancestral home of the Rappahannock Tribe and a globally significant Important Bird Area for resident and migratory bald eagles and other migratory birds, with the national wildlife refuge hosting one of the largest nesting populations of bald eagles on the Atlantic coast. This largely unspoiled landscape is a place of both natural and cultural importance and is a key feature along the Captain John Smith Chesapeake National Historic Trail.

Prior to contact with the English, the Rappahannock Tribe lived in at least three villages on the Cliffs –– Wecuppom, Matchopick and Pissacoak. Fones Cliffs is where the Tribe first encountered and defended their homeland against English settler Captain John Smith during his explorations in 1608.

The Tribe plans to create trails and a replica 16th-century village, where Tribal members can educate the public about their history and Indigenous approaches to conservation. In addition, the land offers opportunities for the Tribe to expand their Return to the River program, which trains Tribal youth in traditional river knowledge and practices and conducts outreach and education for other communities interested in the Rappahannock River.