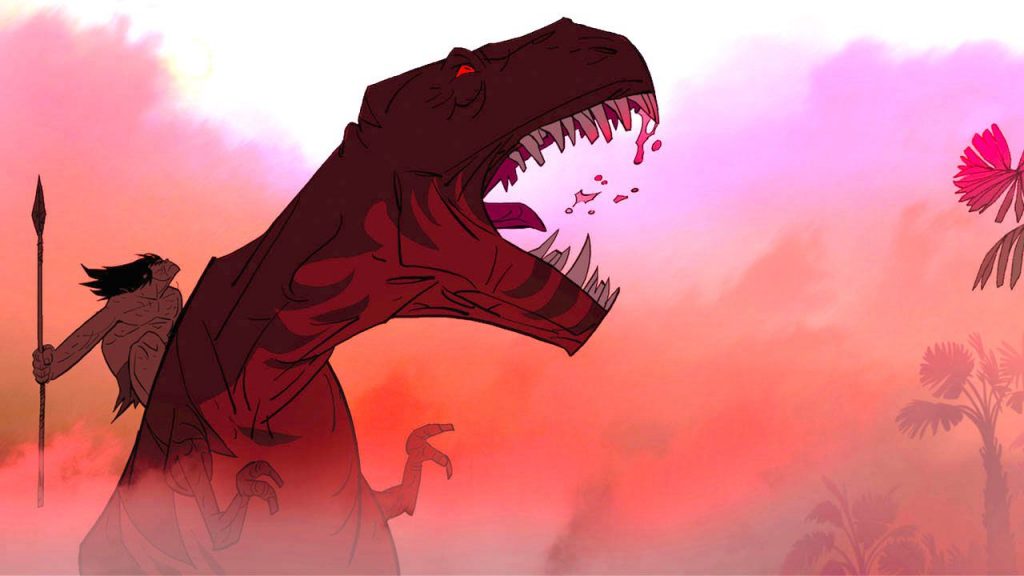 There are thankfully exceptions to this. One of which is Genndy Tartakovsky’s Primal.

Primal is a bloody and beautiful tale of survival. It is one of the rare animated action dramas that is aimed at adults. In fact, I would recommend parents view the entirety of the series before deciding if their children should see this. It is extremely dark, violent, and horrifying. It also has moments of genuine pathos and stirring beauty.

(For the record, I tend to think kids can handle violence and dark themes better than we assume, but it should be up to their parents decide what is appropriate.)

Primal premiered October 8, 2019. It is the story of a cave man and a dinosaur’s fight for survival in a fantasy version of pre-history. Though there is no dialogue in most of the series, the ending credits list the cave man as Spear and the dinosaur as Fang. According to the internet, this is a reference to Spear and Fang, Robert E. Howard’s first published story. Creator Genndy Tartakovsky credits Howard as a major influence in numerous interviews. In fact, Howard’s spirit seems to hang over the series. It can be gut-wrenching the way Howard’s best stories were. Other influences include tales of wilderness survival such as the film The Revenant.

One can see the trailer to the first season. (Note the Byron quote.)

The series starts with Spear fishing and narrowly escaping being eaten by a dinosaur. (The setting is a fantasy version of prehistory with humans living alongside dinosaurs from various epochs and even supernatural creatures. One should not look for scientific accuracy).  Afterward, he returns to his home only to see his family massacred by dinosaurs. Despairing, Spear attempts suicide only to be stopped by a vision of his family. Left alone, Spear returns to eking out an existence.

During this he encounters Fang, a Tyrannosaurus Rex. He stalks the dinosaur as an act of vengeance only to find it a mother with hatchlings. It is then that the same dinosaurs that attack Spear’s family attack Fang’s. The hatchlings are eaten in a gory scene. Together Spear and Fang slay the dinosaurs.

This is the first episode. The rest of the series chronicles Spear and Fang’s fight for survival as they learn to rely on each other. This story, less well done, could easily be ridiculous. Instead, it is visceral and gut-wrenching. There is a genuine character arc to the first few episodes as Spear and Fang learn to work together. You actually feel for the caveman and the dinosaur.

The animation is beautiful. The backgrounds are stunning. Spear seems to have stepped out of a Frank Frazetta picture. Tartakovsky chose to tell the story in a visual manner with no dialogue (except the final episode of the season). Emotion is established by closes ups of Spears face. Another influence on Tartakovsky seems to be Sergio Leone so there are a lot of close ups. There is also the same deliberate pacing that is in a Leone film.

Notable episodes include: A Cold Death in which the killing of a mammoth leads to a conflict between the protagonist and the mammoth’s heard, Terror Under The Blood Moon, which I think was influenced by Robert E. Howard’s Wings in the Night, with Spear and Fang encountering a tribe preyed on by winged monsters, and the horrifying Plague of Madness in which Spear and Fang are terrorized by a dying dinosaur. There are, however, no bad or even mediocre episodes. There was also a movie called Primal: Tales of Savagery which was made from the first four episodes.

Genndy Tartakovsky is a long time veteran of the animation industry. He is notable for creating Dexter’s Laboratory, which I enjoyed as a kid, and Samurai Jack, which I watched as a teenager. (I would also highly recommend Samurai Jack).

Primal can be seen on the HBO Max streaming service. DVDs and Blue Rays of the series can be bought. I should note that I found my local library had the DVDs so one might want to check there. A second season is planned for the summer of 2022 on Cartoon Network.