Learned a new term last week that might apply to some of us. A young woman who goes by the handle “Prairie Carrie” sent a photo to The Nugget of herself in a 19th Century dress amid the ruins of the Hindman Barn at Camp Polk Meadow Preserve near Sisters. 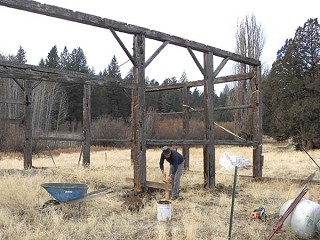 The Hindman Barn near Sisters.

She said she was out “historybounding.” That was a new one on me. It has to do with incorporating historical or “vintage” elements into one’s everyday attire. Not historical reenactment but — in my formulation — “making the past present.”

“…the idea of historybounding is to put together an outfit inspired by historical dress, but without necessarily looking like you got lost on your way to a theatrical performance.”

Since my day-to-day would not look out of place on the 1893 Shangani Patrol*, I guess I’ve been historybounding all my life without knowing it.

Found some more titles need to find their way into the Frontier Partisan library. Helion Press out of the UK offers a rich roster of military history titles. This one is brand new and hits the U.S. in April: 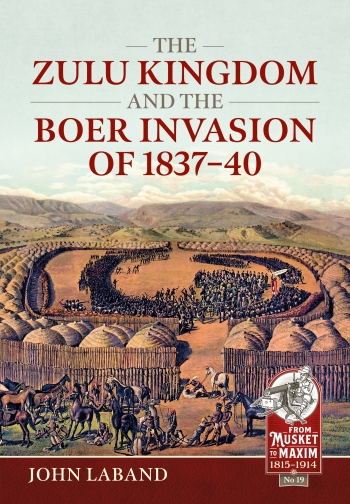 The invasion in 1837 of the Zulu kingdom by Boers migrating from the British Cape Colony, and the massacres, battles and civil war that ensued between 1838–1840 as the Zulu resisted the settlers with spear against musket, was a critical moment in South African history. Many Afrikaners long celebrated their partial victory as the God-given justification for their subsequent dominion over Africans, while today Africans commemorate the war for its significance in their struggle against colonialism.

Changing perceptions in a post-colonial world require the reassessment of wars of colonial aggression, but there is no book in English that engages with the war between the Boers and Zulu in its entire context or takes the Zulu evidence into proper account. This work attempts to do so. While dealing with the warring sides as even-handedly as possible and contrasting their military systems, it also makes a point of developing the less familiar Zulu perspective, explaining political motivation, strategic military objectives and fissures in the royal house. Further, the book situates the Great Trek of the Boers, or Voortrekkers, in the context of the many migrations taking place at that time in southern Africa as the result of widespread political and social upheavals, of which the militarily powerful Zulu kingdom had been the most significant outcome.

The book begins with the journey of the Voortrekkers over the highveld form the Cape Colony towards Zululand where they intended to settle, and with the war they fought and won in 1836–1837 against the Ndebele, an offshoot of the Zulu whose military system they shared. The battle of Vegkop proved the superiority of musket-fire directed from a secure wagon laager against an enemy armed primarily with spears, and would be the model for successful Boer engagement against the Zulu in 1838 at the battles of Veglaer and Blood River. The campaign of 1838 also demonstrated that the Zulu was masters of surprise, ambush and manoeuvre in the open field that resulted in their victories at the battles of Bloukrans, eThaleni, the Thukela and the White Mfolozi.

The war reached a stalemate by the end of 1838 but Dingane, the Zulu king, had been discredited by his inability to expel the Boers from the southern part of his kingdom. His half-brother Mpande then rebelled against him and, in alliance with the Boers, overthrew him in 1840.  The Boers recognised Mpande as king over a reduced Zulu kingdom that maintained its independence until the British invasion of 1879.

*And then there’s this — due sometime this spring (which probably means summer in the U.S.): 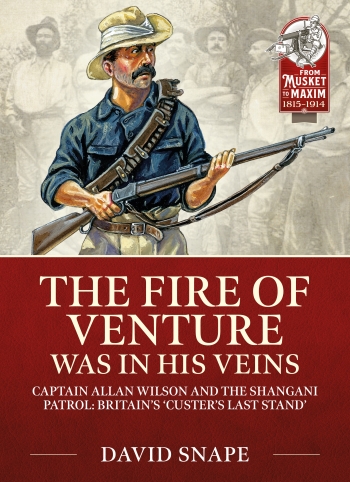 The war was a joint enterprise of Cecil Rhodes’ British South Africa Company (BSAC) and the British Government, but the Company ensured it was the senior partner. Leander Starr Jameson, with his military adviser John Willoughby, both of whom were to be protagonists in the notorious Jameson Raid, were heavily involved in the overthrow of Lobengula. Jameson’s instructions to the leader of the Patrol, Major Patrick Forbes, placed him in an invidious position and virtually split his command. Allan Wilson and his men were sent to his death by Forbes but Wilson’s overconfidence in his ability to fight the Ndebele also played a major part in the massacre of his men.

The relationships between the three commanders of the Patrol, Forbes, Wilson, and Commandant Pieter Raff, were fraught, and Forbes’ struggle to maintain control was gradually eroded by Raaff, who was an Afrikaner with extensive experience in fighting the Zulus, and whose caution might have been caused by his fatal illness.

Accounts from Ndebele survivors of the battle paint a typical Victorian picture of brave men dying for Queen and country, but did they actually die for Queen and Company? Did Forbes leave them to their fate? Whatever the cause, Wilson’s men’s bravery was unquestioned.

The book provides an account of the causes of Ndebele War, and the relationship between the BSAC and Lobengula. The Patrol is examined in detail as are the battles of Shangani and Bembesi which preceded it. The theft of Lobengula’s gold by two members of the Bechuanaland Border Police became a cause célèbre and may have contributed to Jameson’s decision to send the Patrol in pursuit of the King.

The Company’s victory contributed to the creation of Rhodesia and Shangani Day soon became a national holiday in the country. Jameson was seen as a hero and decorated by Queen Victoria for his part in the war.

In compiling the story of the Patrol, David Snape has used both contemporary accounts, Parliamentary Papers, and the work of other historians to analyse the complexity of the circumstances which led to Wilson’s death and the relationships between the senior commanders.  The book also attempts to explore the less savoury aspects of this episode in the expansion of the British Empire,  whilst acknowledging the bravery of those involved.

UPDATE: At the recommendation of J.F. Bell, John Edmond’s ballad The Shangani Patrol:

John Edmond always put me in mind of a Rhodesian Johnny Horton.

Author Stanley Wheeler recently stopped by the virtual campfire. He’s created an alternative fantasy version of the American Revolution in a series he calls Tomahawks and Dragon Fire. Here’s the caper: 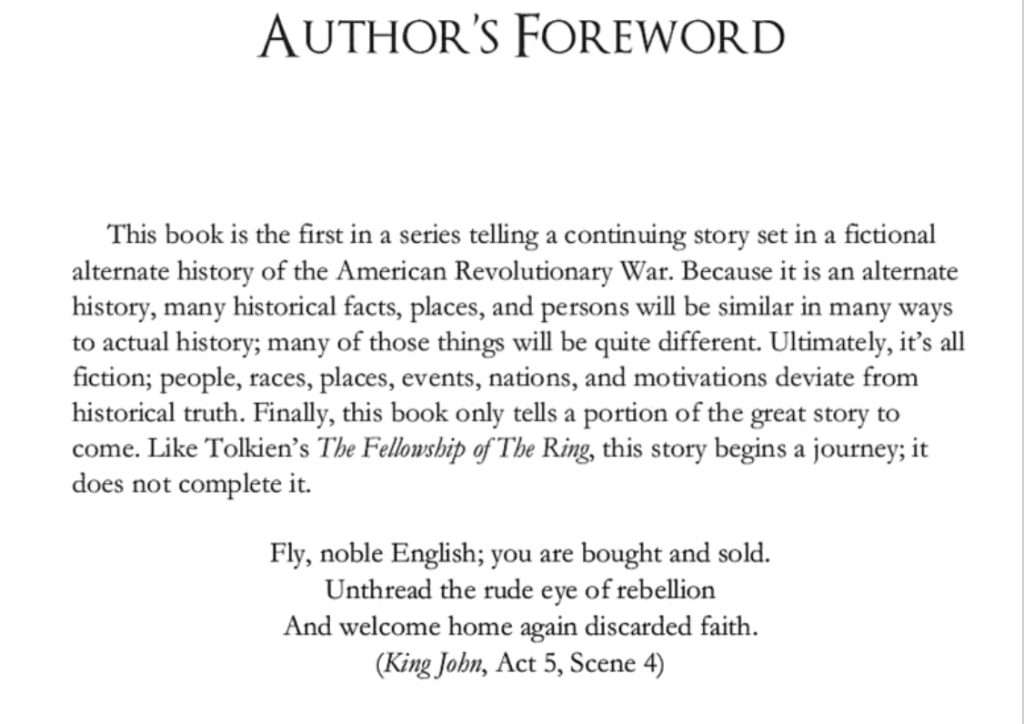 A Flintlock Fantasy with kick! A secret map to a hidden treasure of immense power. An empire engaged in a war upon multiple continents, and a dark commander who wields mysterious power. A fearless young woman who must get the map to the one person who can protect it and use the cache of great power to turn the tide of war. A young man with plans to embark upon a new career with the girl he loves at his side has his hopes dashed as events sweep him into the center of the conflict, forcing him to thread the rude eye of revolution. In order to survive, he must escape the clutches of the dark commander, and master the same power his enemy wields. Time is a luxury the dark commander does not intend to grant the young man. A strange pair may help save the map, but they cannot keep the young woman from the grasp of the dark commander. The dragon hunters seek their prey with a commission from the king, but even they don’t know the true purpose of their task. How can they overcome the awesome power of a beast rumored to be impervious to weapons and which spews the fires of the devil’s own forge? The smugglers may agree to add some desperate passengers to their cargo, but they can’t foresee that an accounting will be required in blood. All of the players upon this stage where mighty empires collide will soon face a terrible trial by fire.

I’ve cut sign of this series before, but now that Mr. Wheeler has joined us at the fire, I surely must ride out to Fennario to investigate…