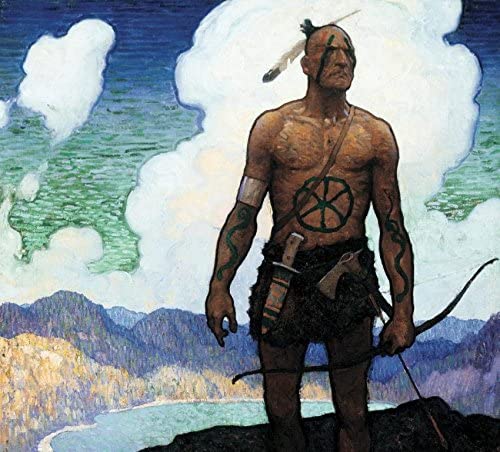 I didn’t know if I could do it. I’d been hankering to reread The Last of the Mohicans — published in 1826 — which I first read somewhere back in the hazy 1970s. But return to 1757 via the 200-year-old prose style and verbiage of James Fenimore Cooper? I knew that I’d have to slow down to his early 19th century pace, and accommodate numerous details and digressions. So I stilled my mind, resolved to get into and go with Cooper’s flow, and began. Well, glory be: success! I reread The Last of the Mohicans, and I loved it! I even enjoyed the pace and style so different from 21st century writing.

It was 1757. European powers England and France were in a titanic battle of empires for control of the colonial territories of North America. In August a French army under Louis-Joseph de Montcalm laid siege to Fort William Henry on Lake George in the English colony of New York, commanded by Colonel Edmund Munro. The novel opens with Munro’s daughters Cora and Alice journeying to join their father, escorted by English officer Duncan Heyward. When they get lost in the forest, they’re saved and delivered to the fort by the frontier woods runner Natty Bumppo — Hawk-eye — and his Mohican companions Chingachgook and his son Uncas. The events around the siege, surrender, and a subsequent massacre occupy the initial parts of the book. Interestingly, what most would call a historical novel Cooper considered to be “a narrative” — for he endeavored to tell a true tale. 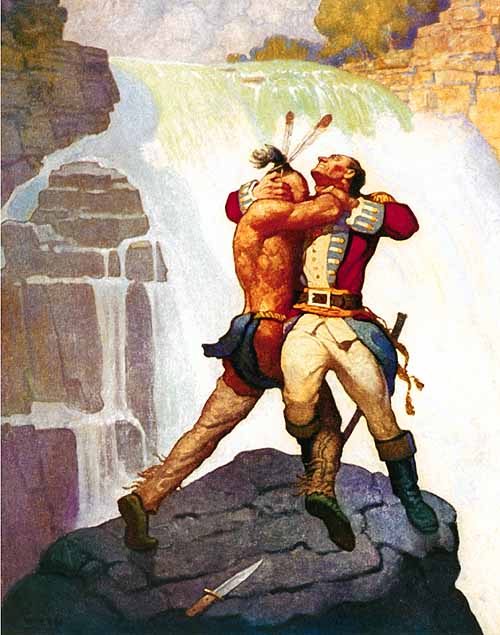 An extraordinary aspect of The Last of the Mohicans is Cooper’s focus on the Indigenous tribes, allies of both European powers. Professor David Blair of the University of Kent considers the central historical issue of the novel to be “the effect of colonial and post-colonial expansion on the Native American peoples.” During his borderline frontier upbringing in New York Cooper learned about tribes native to the surrounding lands, especially the Delaware, from the writings of Moravian missionary John Heckewelder. Cooper injected that knowledge and his positive feelings for those Indigenous peoples into his novel. 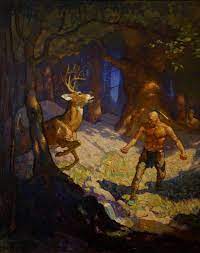 This aspect was exciting to me, for when reading the novel I went home. The Mohicans were a Lenni Lenape/Delaware people. And I am a Yankee born and raised in northeastern New Jersey on what were Lenni Lenape lands. My father Fred Schwertfeger had learned about the Lenni Lenape; and by example taught me to respect and be interested in the histories and cultures of Native peoples. Cooper recounts more of the history of those tribes; and how Chingachgook and Uncas embodied sterling characteristics of the Mohican branch of the Delaware. It also is the case that Cooper’s treatment of them strays into “the Noble Savage” characterization:

“an idealized concept of uncivilized man who symbolizes the innate goodness of one not exposed to the corrupting influences of civilization.”

Professor Blair notes that the “novel has become central…to our view of America’s emergence as a nation and a culture.” Given its centrality, volumes and volumes of literary, socio-political, and cultural analysis have been written about the numerous intriguing themes Cooper included. I will mention a few – such as the Noble Savage one above. But a thorough treatment of controversies around the novel’s themes is beyond the scope of this article. 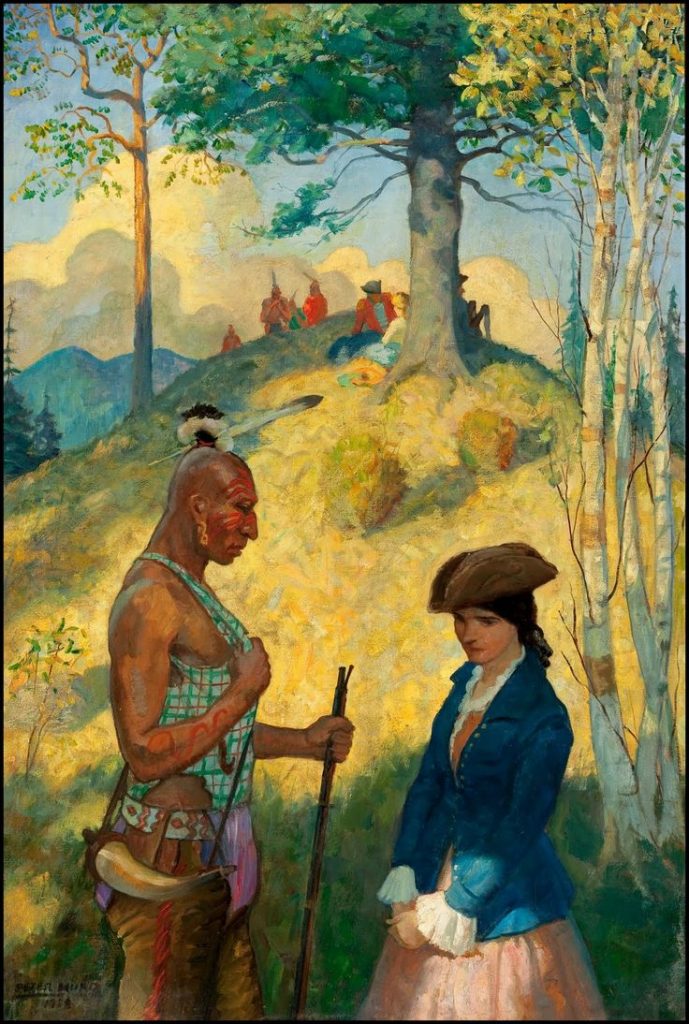 One “controversy” does need to be addressed! I’m a big fan of the 1992 movie version of “The Last of the Mohicans!” It’s exciting, visually wonderful, a gripping telling of the story. BUT it veers away from the novel a lot, including in one extraordinarily major way. For in the movie the Caucasian Hawk-eye is the love interest of Colonel Munro’s beautiful daughter Cora. Well, folks, that ain’t the way Cooper wrote it! In the novel Cora — half Black and half Caucasian — is attracted to the beautiful warrior Uncas. Cooper bravely injected cross-race love into the novel. But movie producer/director Michael Mann chose the safe path. Actor Daniel Day-Lewis, playing Hawk-eye, certainly was a manly specimen in 1992, handsome, lean, vigorous, hard as iron. But my gosh, what a change from the novel. To be fair, Mann did have Cora’s fully Caucasian sister Alice attracted to Uncas. Oh well, as movie critic Roger Ebert said:

“The Last of the Mohicans is not authentic and uncompromised — more a matinee fantasy — but it is probably more entertaining as a result.”

All the key characters escaped the post-surrender massacre. But Huron chief Magua captured the Munro sisters and Duncan Hayward, and struck out for Iroquois (Mingoes) lands, aiming to force Cora to be his wife. And here’s where Cooper played fast and loose with reality. For he placed the Iroquois/Six Nations/Hurons fully on the side of the French, and therefore enemies of the English-allied Delaware/Lenape/Mohicans. 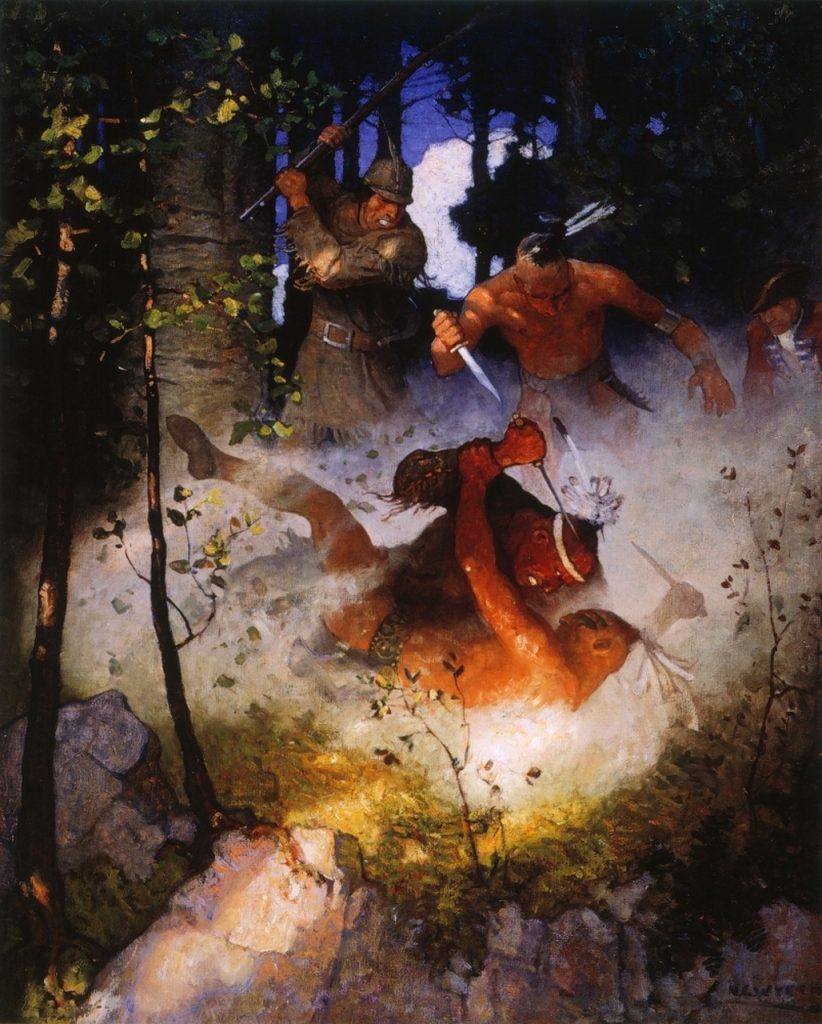 Reality was far from that simple. And Cooper presented the Delaware as “contemplative, profound, heroic, humane, and politically sophisticated.” (Blair) Correspondingly, Cooper had the Mingoes embody the mostly negative images of Native Americans that European-Americans held at the time. As Professor Blair notes, Cooper’s characterizations “plunge the novel into a profound equivocation in its representation of the native peoples.” Whatever Cooper’s reasons for this were, from the point of telling a rip roaring tale, it works. 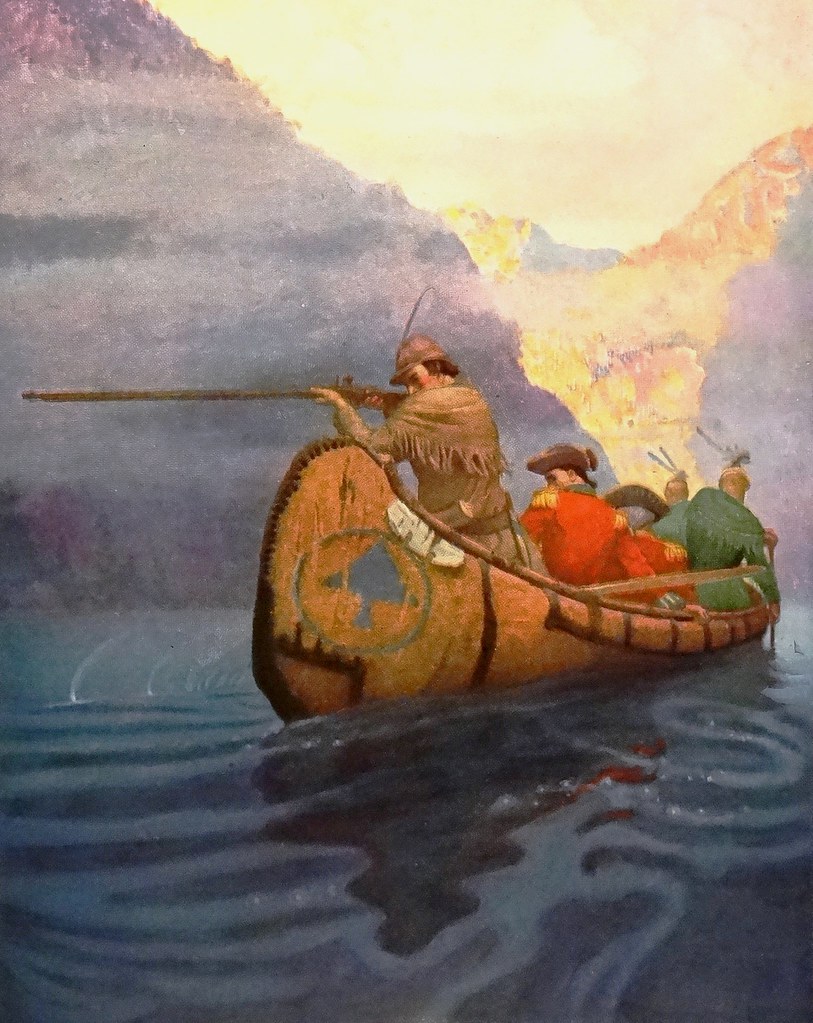 Hawk-eye, Chingachgook, and Uncas attempt a dramatic rescue of the captives. But Magua flees with two companions carrying Cora. High on a ledge, Cora refuses to continue.

Knife in hand, Magua presents Cora’s options: “the wigwam or the knife. Choose!” Deadly tragedy results as at that moment Uncas wildly assaults Magua. Both Cora and Uncas are killed. And Chingachgook truly becomes the last of the Mohicans.

And I, a student of American Civilization from Lenni Lenape lands, am darn glad that I read it again!