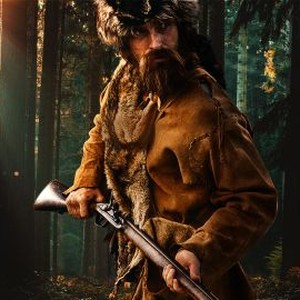 A few days back the folks at INSP got in touch with an offer to review their new docudrama series Into The Wild Frontier. Most gracious, and it took less time than it takes a fast flintlock to spark a charge for me to hit the reply button with a hearty “Aye!”

They sent me screeners for the first two episodes: John Colter: King of the Mountain Men; and Jim Bridger: Forge on the Frontier. Mi compadres, this one shoots plumb center. The folks that put this series together know fat cow from poor bull. Don’t know what y’all will have to do to track down Into The Wild Frontier, but you’ll find it worth the effort.

At long last, we’re getting a doco that seeks to tell some unsung stories. Yes, there are familiar names here — Boone, Kit Carson, Lewis & Clark — but few outside of serious fur trade buffs know the names of Tom Fitzpatrick, or Jim Beckwourth, or John Colter. These days, I’m guessing not a whole lot of people know the epic stories of Jedediah Smith or Jim Bridger, either.

INSP assembled a fine crew of historians and frontier aficionados to add commentary to accurately recreated episodes in frontier history, including one of my favorite historians, Paul Andrew Hutton. It was gratifying to see Steve Rinella of Meateater in the mix.

As FP reader and ace author John Maddox Roberts pointed out on these pages long ago, the real “Wild West” wasn’t the post-Civil War era — it was the era of the fur trade and the conflicts along the Southwestern border, when the men who ventured out into the wild were truly on their own. And you can’t get any more “on your own hook” than was John Colter in 1807. Colter is the subject of the first episode, which premiers on February 17. 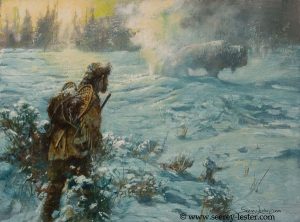 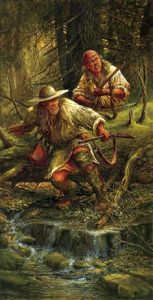 Colter was a contract hunter with the Corps of Discovery — surely one of the best gigs in all of frontier history. When the expedition returned to the United States, Colter elected to stay in the mountains, agreeing to guide a pair of trappers back up the Missouri River. This was almost 20 years before the Rocky Mountain Fur Trade really hit its heyday, and Colter is often considered by historians to be the “first Mountain Man.”

In 1807, Colter joined the Missouri Fur Co. under the Spanish trader Manuel Lisa, and helped establish Fort Raymond on the Missouri River. Lisa tapped Colter for a profoundly dangerous solo mission: To trek out to notify the tribes that the post had been established and to invite them in to trade. Colter set out alone with a rifle and a 30-pound pack, ultimately covering some 500 miles on foot through the wildest terrain on the continent. Colter was the first recorded white man to see what would become Jackson Hole and the weird wonders of Yellowstone, which would for years be known to Mountain Men as “Colter’s Hell.”

It’s one of the greatest feats of scouting in Frontier Partisans history.

All of this is accurately and throughly depicted in Ep. 1 of Into The Wild Frontier. The recreations are quite well done, and the actor portraying Colter is the spitting image of what I’ve carried in my imagination since I first encountered his story in Winfred Blevins’ Give Your Heart to the Hawks when I was 13 or 14 years old.

The most legendary episode in Colter’s legendary life was his desperate run to escape a party of Blackfeet warriors who had captured him and killed his partner John Potts. Again, the film’s depiction tracks most accurately with historical accounts. 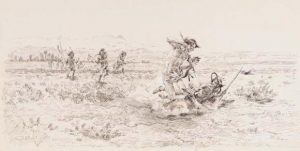 The creators of this series obviously care about the history, and put some real effort into getting it right on all levels. It’s a truly worthy addition to the Frontier Partisans library, and I encourage you all to do whatever you can to track it down — it’s worth the time and effort. And I hope that some 13-year-old kid watches it and marvels at the skill, fortitude and courage of John Colter and the spark of his legend lights a life-long fire…

Previous Post: « Wilderness Adventure And Demon Folklore  — A Journey With Adam Shoalts
Next Post: Of Nightbirds And Other Strange Creatures »