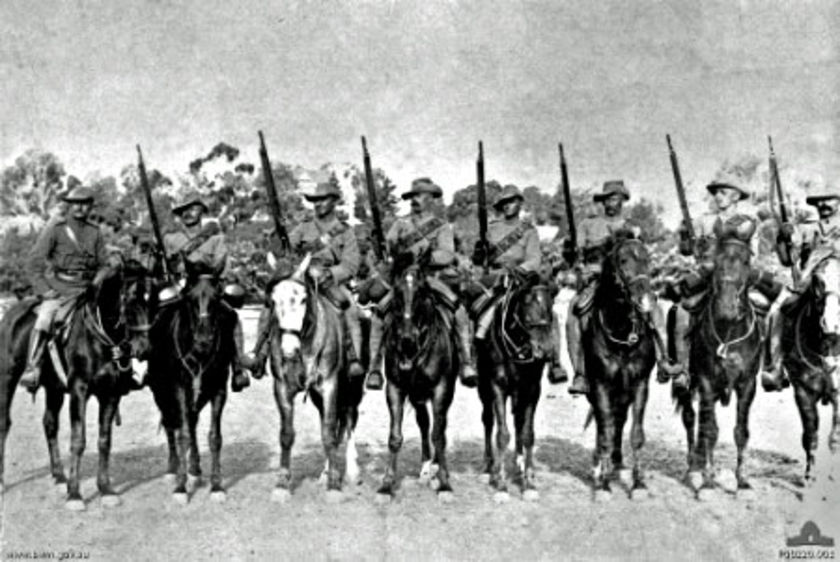 For a while, Harry Harbord Morant seemed to thrive in military service in South Africa. His expert horsemanship and quick wits landed him a good gig as a dispatch rider, including a stint with a correspondent for the London Daily Telegraph , which allowed him time to flirt with nurses at a local military hospital.

The Breaker was part of the campaign that captured Pretoria and was at the battle of Diamond Hill, where the British prevented the Boers from recapturing the city and which marked the end of conventional campaigning. Morant took leave and sailed to England, where he and his friend Capt. Frederick Percy Hunt launched a different kind of campaign and became engaged to a pair of sisters. (Some accounts are that The Breaker was engaged to Hunt’s sister). The Breaker apparently sought reconciliation with his estranged family (or relations that didn’t recognize him at all) and was rebuffed. He returned to Africa with Captain Hunt, who persuaded him to take a commission in the Bushveldt Carbineers.

The war had degenerated into a nasty guerrilla campaign. Bred to the saddle and the Mauser rifle and steeped in the kind of rock-ribbed Calvinist religiosity that made for generations of bitter-end fighters, guerrilla warfare suited the Boers and frustrated the hell out of the British. On the premise of “it takes one to catch one,” the British formed partisan hunting units like the Bushveldt Carbineers out of colonial horsemen and captured Boers — despised by their hardcore brethren as “hands-uppers” (the Colonials didn’t think much of them either). 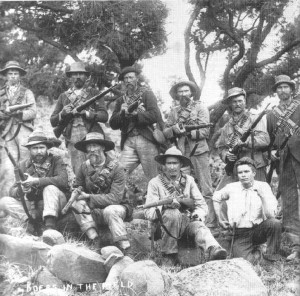 They don’t come any tougher than the Boer commandos who fought to the bitter end.

These were rough units. The Bushveldt Carbineers had a reputation for indiscipline, with a lot of livestock rustling and illicit drinking going on. Surprisingly, Morant, with his right hand man Peter Handcock, a tough Aussie who had signed up to escape unemployment at home, took the unit in hand. He apparently took his job and his responsibility to Captain Hunt seriously, for the hard-drinking wastrel got rid of the illicit liquor, cashiered some of the thieving troopers and put a lid on the rowdiness. For that, some remaining Carbineers hated his guts.

Frustrated by their inability to bring the war to a close, the British under Lord Herbert Kitchener began a systematic campaign of farm burning to destroy the Boer guerilla’s supply base and herded women and children into concentration camps — it was the century’s first use of that sinister term — where they died in their thousands from disease and poor nutrition. It is also believed that Kitchener secretly ordered that no quarter be given to Boer commandos caught wearing khaki from captured British uniforms. At this stage in the war, that was common practice, as the Boer partisans were ragged and had no other real means of supply. It was a necessity of war, but it also allowed for deception tactics, for which the Boers were notorious. The Boers were also known to fly a white flag, then open fire on the troops attempting to accept their surrender. They blew up trains and hit garrisons in lightning raids, escaping into the vastness of the veldt.

By 1901, as Kitchener tried to bring the bitter-enders to the table for peace negotiations, a take-no-prisoners attitude was commonplace among many of the irregular anti-partisan units. Stationed at a lonely farmhouse — grandly named Fort Edward — in the pestilential Spelonken area of the Northern Transvaal, Morant chased Boers under the command of Captain Hunt. In at least one case, Hunt chided Morant for bringing in prisoners despite orders to the contrary.

Captain Hunt led a 17-man patrol backed by African auxiliaries to a Boer farmhouse south of Fort Edward, where intel from hands-uppers indicated they could capture the Boer commando leader Veldtcornet Barend Viljoen. As he approached the farmhouse, Hunt and other BVC troopers went down in a hail of Boer gunfire. The commando had either spotted the patrol or knew it was coming. The bulk of the BVC detachment fled the ambush, leaving Captain Hunt wounded in the yard. The Boers escaped into the veldt and Hunt’s body was recovered the next day. It was apparent that he had been stomped and beaten and his body mutilated.

Hans van Schalkwyk contacted Frontier Partisans with a different and highly plausible account of this incident:

Boers (15) were attacked while sleeping by Captain Hunt with large patrol and more than 300 black warriors assisting at around midnight on 6 Aug 1901. Captain Hunt, Sergeant Eland and the Veldt Cornet Viljoen and his brother died. After the fight the blacks mutilated all the bodies (Boer and Brit) My great grandfather shot and killed Hunt that night.

Morant arrived after on the scene after Hunt had been buried, but the reports of what had happened to the man he considered his “best friend on this earth” sent Morant into a rage. He was described by BVC trooper George Witton, who would stand trial with him, as being “like a man demented.” The BVC chased the Boers and caught them in a camp in a ravine. In his lust for revenge, Morant opened fire too soon and most of the Boers escaped. One, a man named Visser, was shot through both ankles and couldn’t flee. He was wearing items of khaki clothing. In his demented state, Morant convinced himself the clothing came from Hunt’s body. He had Visser propped up and a firing squad mustered to blow him into eternity.

Later that month, Morant and Handcock led a patrol out to intercept a column bringing in prisoners from Viljoen’s commando. Morant had the prisoners pulled out and shot down by the side of the road. A German minister, Reverend Heese, who had spoken to the prisoners despite Morant’s orders not to do so, was shortly found shot dead in his carriage on the high road to the town of Pietersburg.

Morant and Handcock later intercepted three other Boer commandos and, after they surrendered, disarmed them and shot them down.

Morant’s last operation was clean. He led a patrol on a 130-mile trek to track down an Irish-Boer leader named Kelly. The Breaker was under orders from a Major Lenehan to capture the Boer field-cornet alive. Morant’s men stealthily approached Kelly’s laager (encampment), rushed it in the pre-dawn hours and Morant took Kelly into custody and took him safely back to Pietersburg.

The Breaker took a brief leave. In October 1901, the BVC was suddenly disbanded and Morant, Handcock, Trooper George Witton and three others, including Major Lenehan, were arrested as a Court of Enquiry took evidence on the conduct of the BVC. In December, Lenehan and two others were released with no charges. Morant, Handcock and Witton would face court martial.

In Part III, Breaker Morant, Peter Handcock and George Witton are tried and convicted in circumstances that remain controversial to this day.