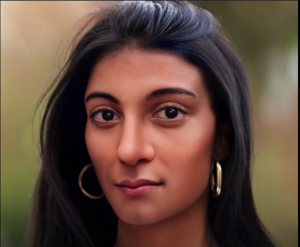 Reconstruction of historical figures through computer graphics and sometimes through forensics is one of the perks of the 21st Century. Recreating a historical personage as a “modern” person can humanize the past and bring it closer to us — something I am always keen to experience.

A Texan named Becca Saladin has made a nice gig for herself doing this work under the DBA Royalty Now. Here’s the caper:

Like most people, I’m so intrigued by history, yet always felt separated from the figures, likely because it’s difficult to relate to a stiff, formal portrait of a monarch. In early 2018, I created an Instagram account to share my hobby of transforming old portraits into lifelike modern-day images with fellow art and history enthusiasts. Since then, I’ve been able to expand Royalty Now to YouTube, Tik Tok & Etsy. It’s also expanded into different versions of my work – creating custom renaissance portraits for clients, retouching and colorizing old photographs, bringing an old family relative into the modern-day, and more.

Her most recent video reconstructs Pocahontas — along with giving a concise thumbnail portrait of her short but consequential life:

You’ve heard me gripe many times about documentaries that rehash the same frontier history over and over again — Billy the Kid, the Little Big Horn, Wyatt Earp, Daniel Boone. I recently discovered a Canadian series called Nations at War that takes on compelling but little-known frontier stories. Here’s the caper:

At the end of the 15th century two worlds which had stood apart for generations violently collided. The kingdoms of Europe and the Indigenous nations of the Americas. Despite being divided by language, culture and technology, it was the things they had in common which drove them to war. The quest for power, a desire for resources, and a will to survive.

Through the centuries of conflict that followed cultural and political alliances formed and crumbled, empires rose and fell, and two nations emerged to redraw the map of North America. These are the battles that shaped a continent. These are NATIONS AT WAR!

The docos are obviously shot on a limited budget, and there is some repetitive reenactment imagery, and a slightly disconcerting tendency to flip the image so that a lot of people are shooting left-handed flintlocks. But the history is solid, well-balanced, and the stories efficiently told.  Note: The Youtube videos usually include two 20-minute episodes, so the title episode may not be the first to appear. Eg. The Blackfoot Confederacy video actually starts with an episode on the Mi’kmaq. There’s a bunch of ’em.

Good stuff to watch while cleaning the guns…