Stories of pirates have been popular for centuries. The most famous of these are probably Treasure Island by Stevenson and Captain Blood by Rafael Sabatini. Robert E. Howard often wrote about pirates. One thinks of Conan and Belit raiding ships in Queen of the Black Coast or Solomon Kane hunting pirates down in The Blue Flame of Vengence.

One of the more original novels of piracy is Pirate Freedom by Gene Wolfe. 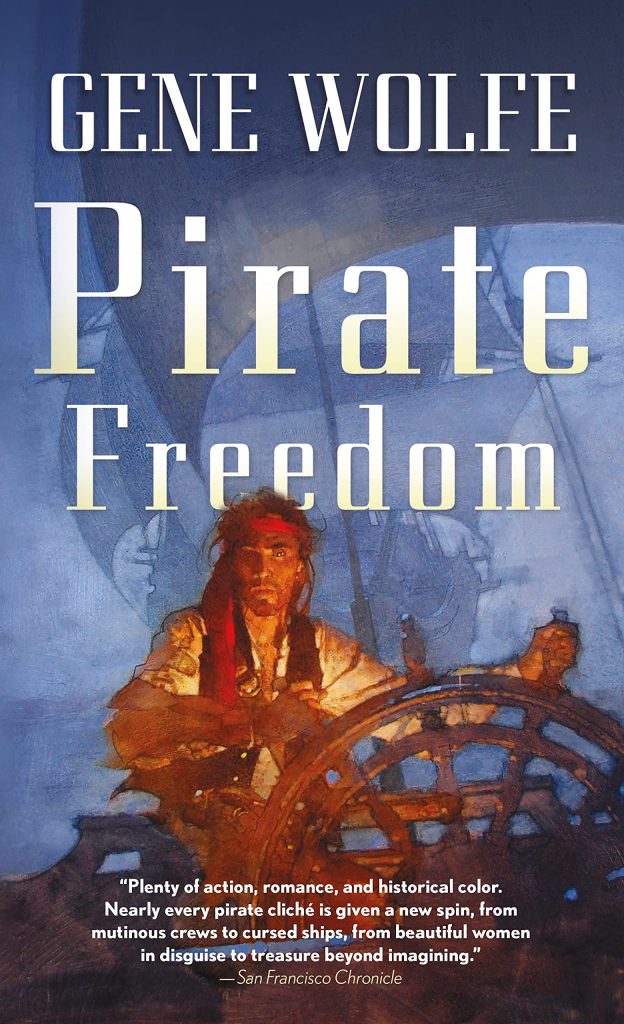 Perhaps the best writer to come out of the science fiction field, Wolfe was born in New York, but grew up in East Texas. He went to Texas A&M for a brief time. After dropping out, he was drafted and fought in the Korean War. When he returned he got an engineering degree from the University of Houston and, upon marrying his wife, converted to Roman Catholicism. As an engineer he would help design part of the machine that made Pringles. Later, he would edit a magazine for engineers and take up writing speculative fiction.

His writing would be influenced heavily by his Catholicism and, to a certain degree, his time in the Korean War. During the 1980s, he wrote his best known work of fiction: the four books series Book of the New Sun. In my opinion, that tetralogy rivals Blood Meridian for the best and densest works of fiction of later half of the 20th Century. He also wrote many standalones novels including the one I am writing about: Pirate Freedom.

The novel is one of time-travel. Its main character an Italian-American by the name of Chris (his last name is never given) grows up in near-future Cuba where communism has collapsed. He is educated at a Catholic school. After he leaves the school, he finds himself mysteriously transported to the Golden Age of Piracy. There he becomes a merchant seaman, a hunter (buccaneer), and finally a pirate.

The novel is written from the perspective of an older Chris who has returned to the near future and become a priest. It is in fact a confession of his crimes as a pirate. Yet, it is an ambivalent confession, and Chris is an ambivalent man. He is both a devout priest and a murderer. He is ashamed of his violent deeds as a pirate and longs for the freedom piracy gave him. He also longs for the woman he fell in love with in the past.

The influence of Wolfe’s Catholicism pervades the novel. At one point, Chris hears the literal words of God. However, I cannot not help but also believe that Wolfe’s experience in combat also influences the novel.

The book is to a certain degree a study of the nature of violence. Chris is haunted by his deeds of violence, but at the same time the book makes an argument for it being necessary sometimes. As a priest, Chris works in a Youth Center in the inner city. It is noted that while the other priests are picked upon by many of the tough youths, Chris is capable of knocking heads himself. There is a later scene at a meeting of the clergy to discuss the problem of priests molesting boys where Chris is shocked, not at the accusations of molestation, but at the fact that the victims, all teenage boys, did not try to fight back.

The argument Chris makes for self-defense has him being accused in story by the other priests (and Wolfe outside of the story by certain reviewers) of promoting violence. To me, the argument was simply that people should defend themselves against predators. This passage is what I remembered best from the first time I read the novel years ago.

Wolfe’s novels are also known for the use of unreliable narrators and literary tricks. Chris is not always aware of what is going on. It takes him a surprisingly long time to figure out he has traveled into the past. Chris is also implied to come from a family involved with organized crime, but the word mafia is never used. Mysteries abound through out the narrative including a subplot about a murderer on board Chris’s pirate ship. His identity and how he hides among the pirates is implied rather than stated. There is a revelation about the identity of a seemingly minor character at the end that turns out to be fairly important.

Wolfe, particularly in his later books, is sometimes accused of being more engrossed in tricking the reader than in telling an actual story. In this novel, at least, though he manages to do both. It is a thrilling and fairly realistic view of piracy and — even at his trickiest — Wolfe plays fair with the reader.

I would certainly recommend the book. While Wolfe’s best work is probably The Book of the New Sun, Pirate Freedom is a good starting place for those interested in his work. It is certainly the work of his most germane to this website. I am no expert but the portrayal of the time period seems authentic. What Wolfe has created a well-written novel that asks some serious questions.