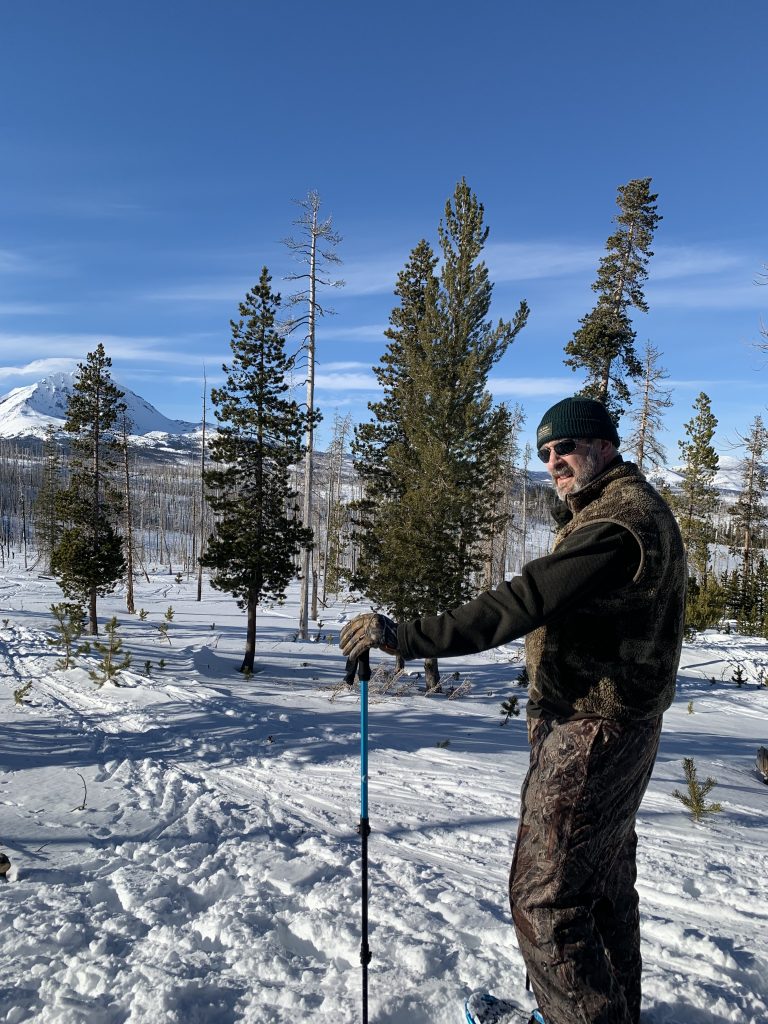 I was feeling adventure-starved toward the end of my “days off” last week. We got a fair dumping of snow over Sisters Country, which translated into a bit of work keeping the homestead and the newspaper shop unburied. The business end of a snow shovel offers a good workout in the out-of-doors, and I welcome it — but it ain’t adventure. Fortunately, Ceili, her boyfriend Jarod — who is a certified outdoor leader and has a well-developed skillset — were able to break out the snowshoes and go a-ramblin’.

They invited this old Frontier Partisan along. On Thursday, December 30, we headed into the forest west of us and cut a loop through  some decently deep snow. We had some snowfall and wind, and it made for a fine, atmospheric twilight ramble. The next day, Ceili and Jarod strapped on the skis and snowboard and hit the slopes, so Marilyn and I took a sedate snowshoe stroll out on the Sisters Tie Trail. With New Year’s Day dawning gloriously clear, cold and still, the Three Musketeers took a jaunt up into the mountains ’shoeing out to the Jefferson View Shelter.

I feel much better, thanks. 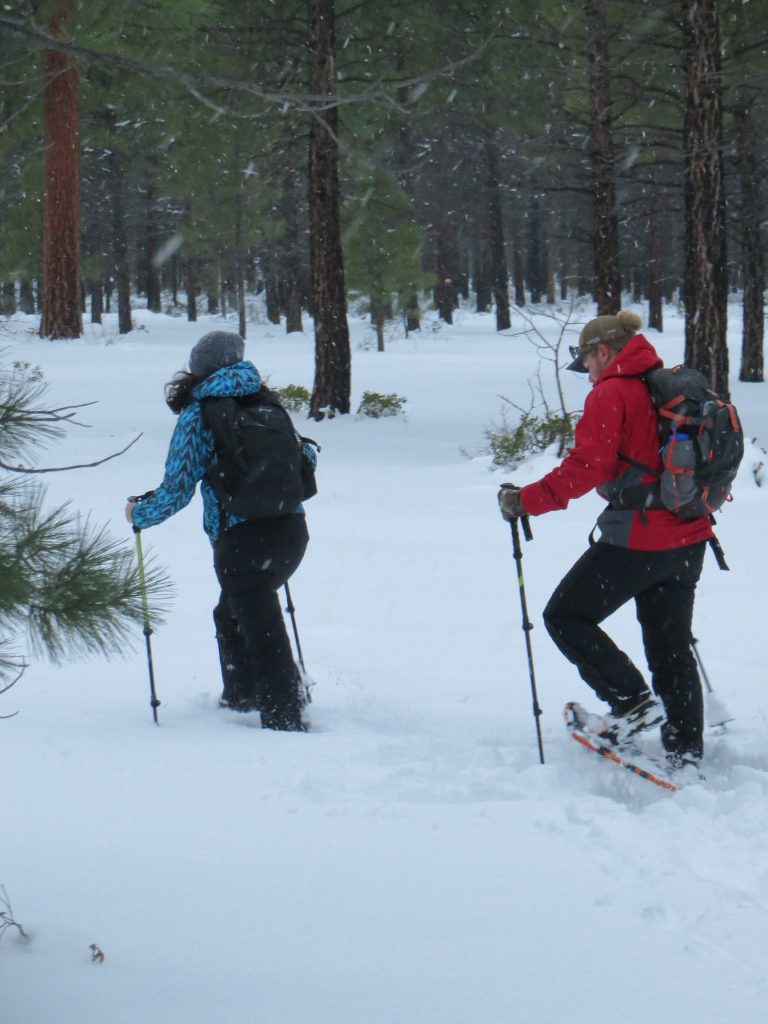 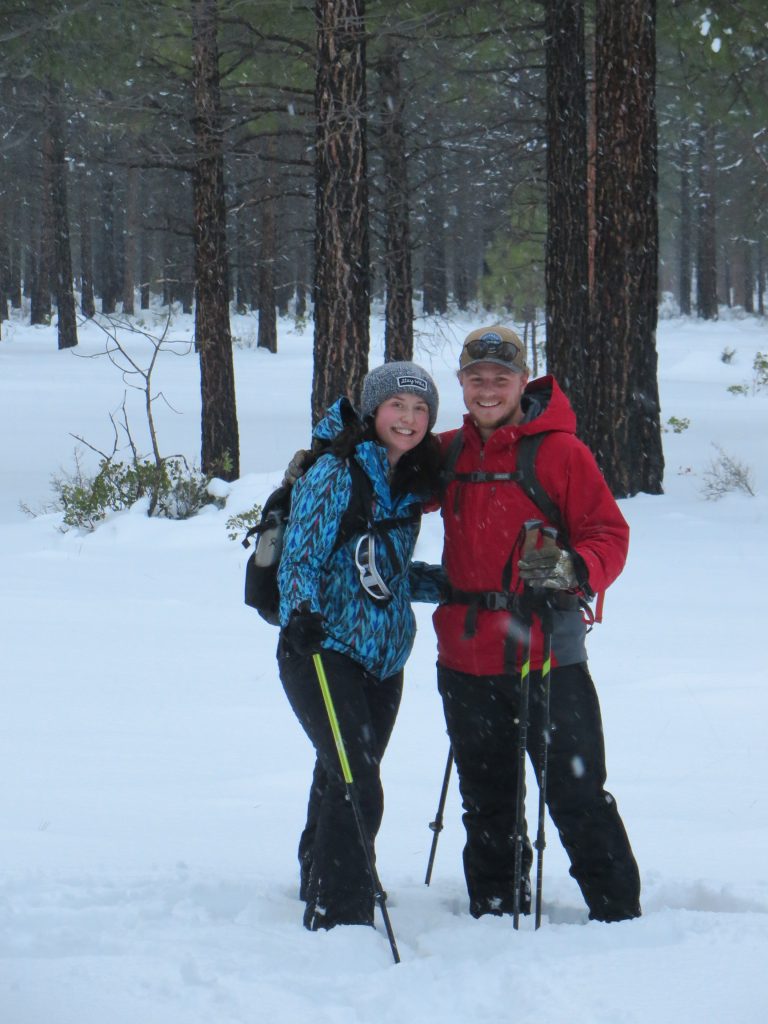 Being, well, me, I could not restrain myself from regaling Ceili and Jarod with the tale of the Deerfield Raid of February 29, 1704, when a force of French and Indian rangers who had snowshoed some 300 miles out of Canada to hit the fortified Massachusetts town, killed some 41 settlers, and captured some 112 men, women and children, whom they marched north to New France. The Deerfield History Museum website is an excellent resource on the raid. 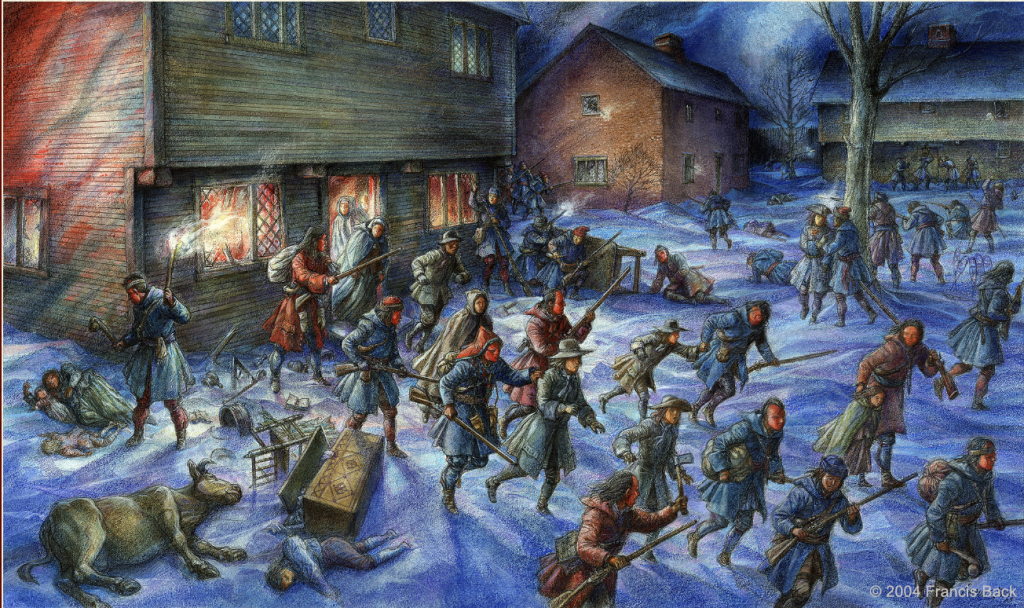 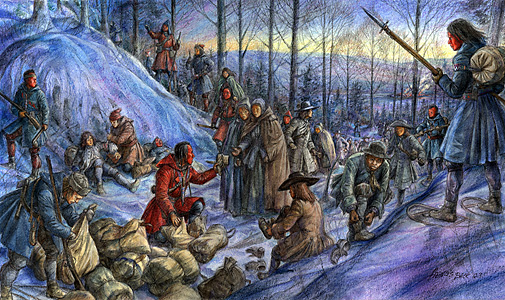 Here’s how the museum describes the snowshoes deployed in the Raid:

The large number of sturdy snowshoes needed for the 1704 raid on Deerfield, Massachusetts, had to be made quickly. Although snowshoe construction varied from maker to maker, broad regional forms emerged. The familiar tailed pattern most commonly seen was typical of the Iroquoian tradition, while the near-circular “bear paw” style was used by the Wôbanakiak. The pair shown here is Wendat in style. They are very slightly upturned at the toe and have a long tail. The frame is made from a single piece of bent wood with two mortised crossbars. The filling is of rawhide thong in a hexagonal weave. The thong ends in the mid section are wrapped around the frame; at either end they are attached to a selvage thong. Winter moccasins, held in place with straps, were worn with snowshoes. The heel was left free to move up and down, while a toe opening in the showshoe allowed for ease of walking. Anthropologist Lewis Henry Morgan noted in 1850 that the Seneca Iroquois claimed that they could walk fifty miles per day wearing showshoes. 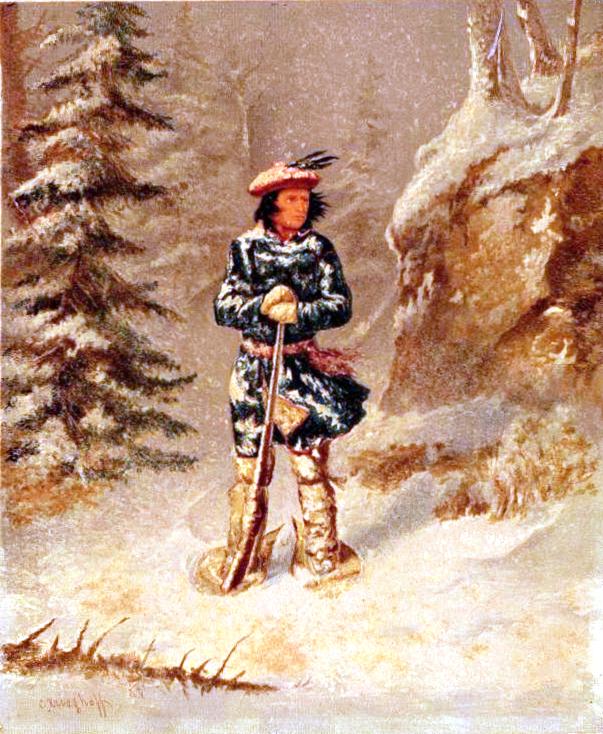 An Iroquois hunter on snowshoes. 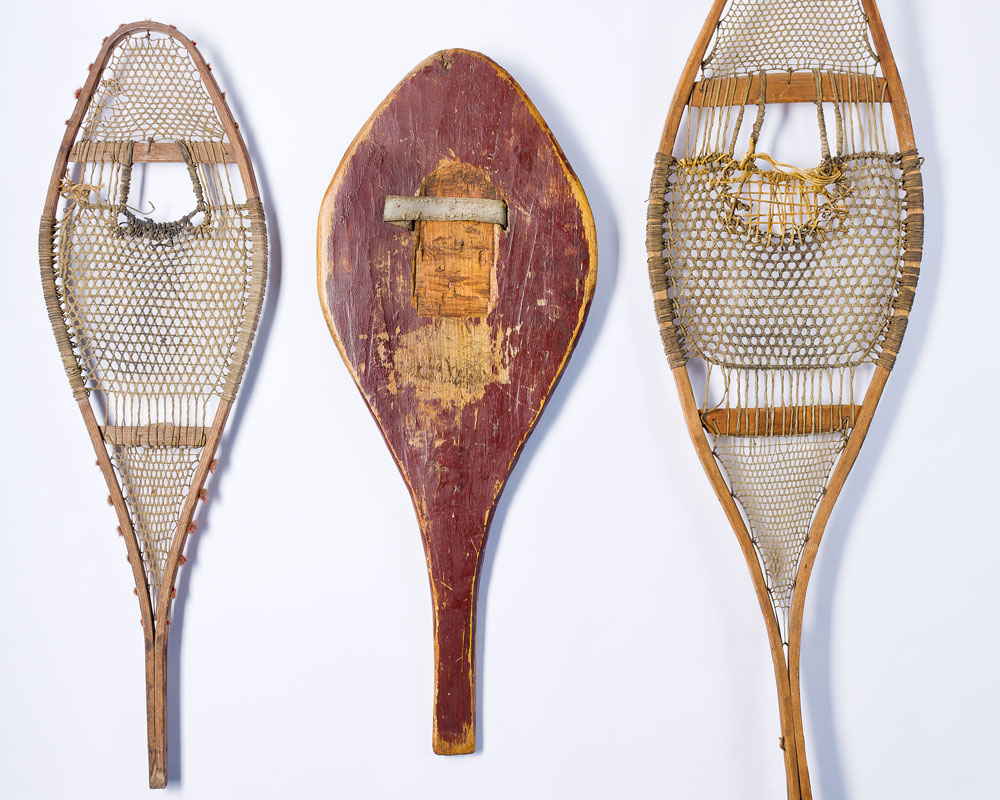 Snowshoes from the Canadian History Museum.

Ceili is accustomed to this sort of historical nerdery, and Jarod is a podcast listener, so he gets it. It added some piquancy to the tale to remind Ceili that her cousin Marissa completed her master’s program in education at Deerfield Academy, where artifacts and memorials to the Raid are a part of the campus.

The New Year’s Day ramble was perfect. It was quite cold — 10 degrees at the start — but clear, dry and windless, so we were actually quite warm in the work. 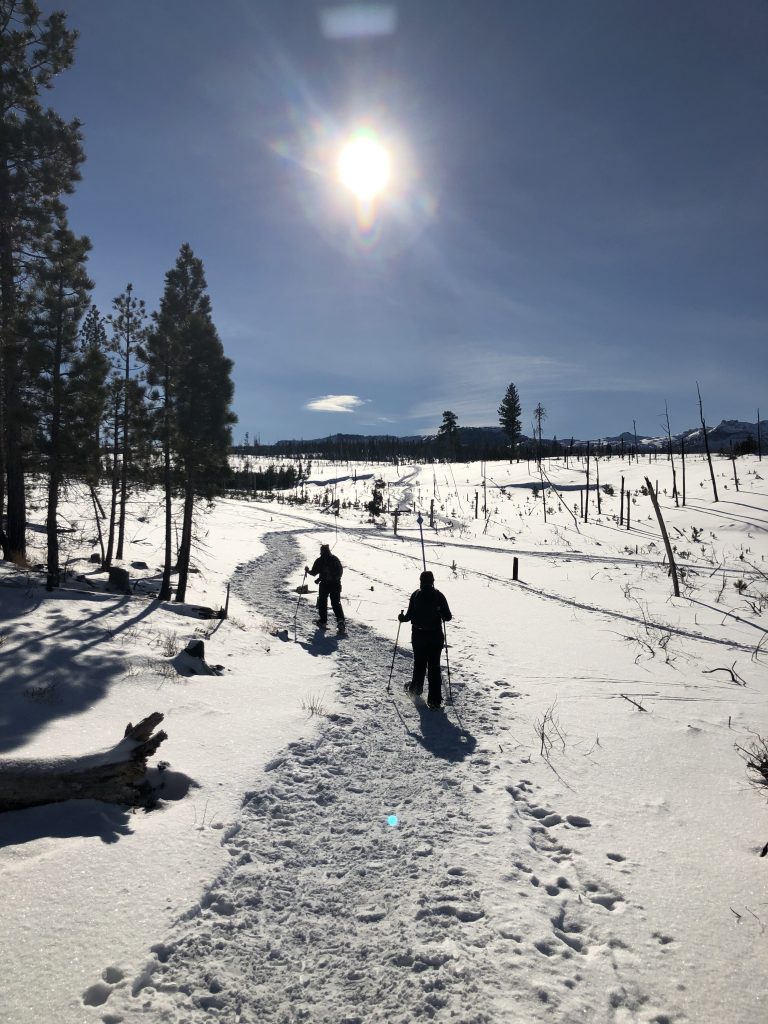 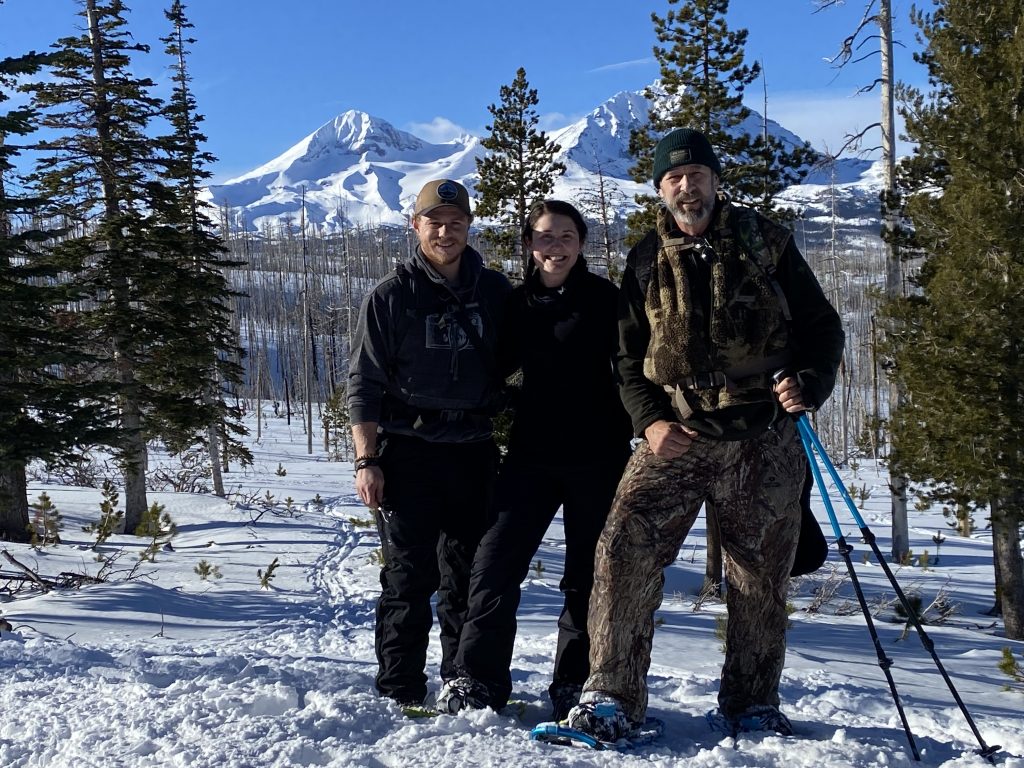 Our adventures were mere rambles — but there’s that Seneca 50-miles-in-a-day number out there beckoning. I know Jarod is up for it…

Previous Post: « Working The Trapline — Splintered Mead Benches And The Road To Culloden
Next Post: The Mythic Territory Of Fennario »