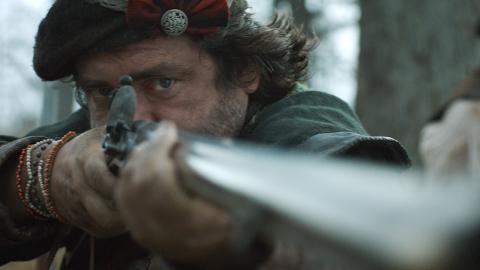 Tomorrow marks the premier episode of AMC’s Revolutionary War spy drama “Turn.” (9 p.m. Sunday, April 6).
Major Robert Rogers, a Frontier Partisan legend if ever there was one, will be featured. Alas for Rogers’ legion of (ahem!) partisans, it looks like he’s portrayed (by Angus MacFadyen) as a villain. Which, of course, he was, if you were an American spy c. 1776. Promos for the show refer to him as “The Mercenary,” which is kinda-sorta accurate. He did pitch his services to both sides.
Sadly, Rogers had, by the time of the Revolution, fallen hard from his French & Indian War glory. A combination of bad luck, backstabbing enemies and character flaws, which included a penchant for strong drink, had brought the great warrior — founder of the legendary Rogers Rangers —  low. He’s one of the tragic figures of the American frontier story.
Show looks intriguing. It focuses on the Culper Spy Ring, formed in 1778, which was Gen. Washington’s eyes and ears on British-occupied Long island.
Late notice on this. Sorry. Been out of town (more on that later).