A Review of Okla Hannali

To describe the work of R. A. Lafferty is to describe something truly unique. If you are not familiar with it you will have trouble conceptualizing it. Ostensibly a science fiction writer, Lafferty has been said to be a writer of tall tales. His work has been likened to Irish author Flann O’Brien and G. K. Chesterton. I tend to think of him as a comic surrealist. His novel Okla Hannali is described as a historical novel about the removal of the Choctaw to Oklahoma.

That is true as far as it goes.

It is partly the tall tale of Hannali Innominee, a Choctaw Mingo, or lord. It is also partly a history lecture, which at certain times gets angry. Hell, the first part of the novel is a recounting of the Choctaw Creation Myth.

Perhaps it is best to start with the man who wrote the novel. Raphael Aloysius Lafferty was born in 1914 in Iowa. At the age of four, he moved to Oklahoma. He would live there for the rest of his life except for his service in the Second World War. According to the preface of the novel, he grew up around Native Americans. He seems to have been interested in them from a young age.

He took up writing in his mid-30s in order, by his own admission, to cut down on his drinking. Lafferty was a self-admitted alcoholic. He was also a traditionalist Catholic who disagreed with Vatican II. He worked as an electrical engineer, and never married.

An odd man who wrote odd stories. Most of his stuff was published in science fiction, fantasy, and horror magazines. While spaceships do appear occasionally, his stuff was so stylistically and content-wise different from anything I’ve ever read that it is hard to describe. His novel Past Master involves Thomas More being resurrected on another planet in the future. Space Chantey is a comic retelling of The Odyssey in space. The Hole in the Corner deals with a man comes home to his house and finds reality breaking down. None of these descriptions prepare you for how weird they are. Or how funny. Or Lafferty’s brilliant, but highly idiosyncratic style.

He also incorporated Native American themes in his fantasy stories. Narrow Valley involves a family of Indians who, wishing to avoid being deposed from their home valley, enchant said valley to be only a few inches wide. Days of Straw, Days of Grass deals days of the week not on any calendar where the world changes into a fantasy land based on tall tales and Native American myths. I seem to remember that Nine Hundred Grandmothers was based on a Navajo myth, but I can’t seem to verify it so I may be wrong. (All three stories are in The Best of R. A. Lafferty.) 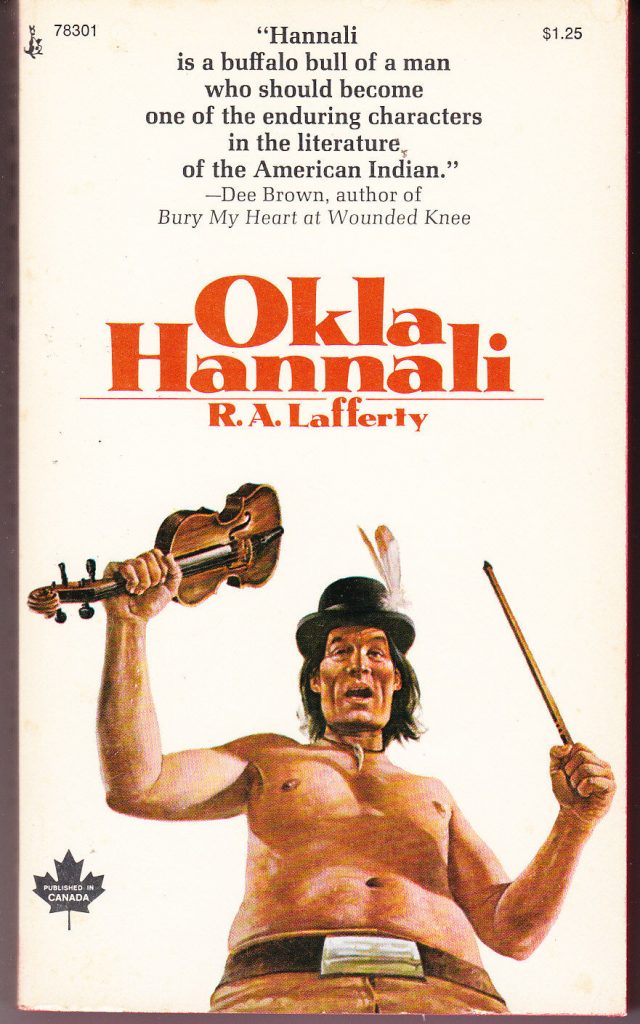 This digression is necessary to give some idea what his fiction is like. Returning to Okla Hannali, it is a tale of Hannali Innominee born in the early 19th Century. It starts at his birth and ends at his death. His life goes on to incorporate all the events that befell the Choctaw nation. This includes the deposing of their lands by Andrew Jackson (who Lafferty refers to as the Devil of the Indians), their trek to what is now Oklahoma where they flourished and the conflict that broke out among the Nations during the Civil War.

The novel is of post-Bury My Heart At Wounded Knee era. (In fact, Dee Brown is quoted praising the novel on the back cover). This is to say it is extremely sympathetic to the plight of the Indians. Previous to this era, the settlers were in books and movies usually (but not always) portrayed as the good guys and the Indians as the bad. During this era, the Indians become the good guys and the settlers the bad. The reality of the situation, of course, is more complex than either. Lafferty MOSTLY follows the later scheme.

That, however, is the politics of the novel. This novel is also art. While it is common today to say art is political and many works of art, including this novel, are political, I believe there has to be something beyond politics for art to truly matter. So how is the novel on a purely aesthetic basis?

I think the novel is very good, but it may not be to everyone’s taste. The novel is basically two different books in one — one that is fiction and one that is non-fiction. Some of the chapters are a tall tale style story of Hannali and his family. Other chapters relate the real life history of the Choctaw. Both are written in a very oral style. In the first, you feel like you are in a bar with a slightly tipsy narrator telling a shaggy dog story. The other you are being lectured by a history professor.

The thing about it is that Lafferty knew the rhythms of language so that the narrative flows from one to the other. The tall tale part is entertaining and often extremely funny. The history lecture is interesting in that involves a lot of American history that is often overlooked. Particularly the sections on the civil wars that were incredibly devastating to the Nations. Then these strands interweave in a harrowing scene where Confederate Raiders destroy Hannali’s house and kill much of his family.

So would I recommend the novel? The answer is yes if you are interested in Native American History or already a Lafferty fan. I do, however, think Lafferty is at his best when he is writing short stories. His style is more suited to that. If you are interested in those the easiest collection to find is The Best of R. A. Lafferty by Tor books.

I do fervently believe that Lafferty was a unique writer with a unique voice and that his books should be better known.