Me gotta go pole my pirogue down the bayou…. 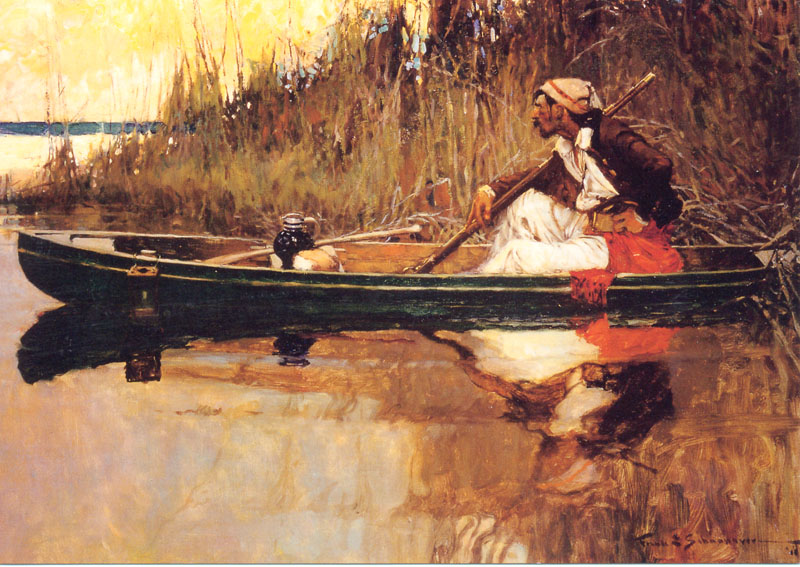 Vidette in Pirogue, or, A Pirate of the Gulf by Frank Schoonover

Just one o’ them ricochets. Roll with it. As I was delving into some maritime Indian special ops in Pontiac’s War (some very cool stuff that will appear in the forthcoming podcast series), I ran across some ponderations on one of the most versatile and yet unsung crafts favored by our maritime Frontier Partisans, the buccaneers and pirates of the Caribbean, the Spanish Main and the Gulf Coast. We all love the big, magnificent ships flying the black and firing their broadsides full-complement and all that — but that’s mostly pirate mythology. The most common pirate vessel was the nimble sloop — but close behind was the humble pearagua, aka piragua or pirogue.

Now, to be technical about it, a pirogue and a periagua are not exactly the same thing, though they have the same derivation. Here’s a serviceable definition from the Wiki:

Periagua (from Spanish piragua, in turn derived from the Carib language word for dugout) is the term formerly used in the Caribbean and the eastern seaboard of North America for a range of small craft including canoes and small sailing vessels. The term periagua overlaps, but is not synonymous with, pirogue, derived through the French language from piragua.

The original periaguas or piraguas were the dugout canoes encountered by the Spanish in the Caribbean. Small craft of greater capacity were created by splitting a dugout and inserting a plank bottom, while the freeboard was increased for sea voyages by adding planks on the sides. By the 18th century the term periagua was being applied to flat-bottomed boats, which could be 30 feet (10 m) or more long and carry up to 30 men, with one or two masts, which could also be rowed. Later in the 18th century periagua became the name for a specific type of sailing rig, with gaff rigged sails on two masts that could be easily struck, commonly with the foremast raked forward and the main mast raked back. The “periagua rig” was used on U. S. Navy gunboats on Chesapeake Bay in the early 19th century. The term periagua was also applied to rowing scows similar to a john boat.

The tactical advantages of these small, nimble craft are pretty obvious: with exceedingly shallow draft, they could get into places a larger ship could not, and they were stealthy and hard to spot. Any buccaneer or pirate worth his salt would rather take a prize by stealth (or intimidation) than by main force. A periagua was perfect for the stealthy approach. A crew would rely on musketry for firepower, since a periagua could not mount cannon, and they’d have to resort to boarding action to take a prize. But with stealthy approach, they could be on their prey before the merchantman (usually a small sloop or barque) knew they were in danger.

The great pirate Sam Bellamy worked his way up from a periagua to perhaps the finest ship-of-force to fly the black — the speedy, well-armed (and doomed) Whydah. There’s something appealingly entrepreneurial about the idea that you could beg, borrow, steal or commission a periagua and get yourself started in the sweet trade… 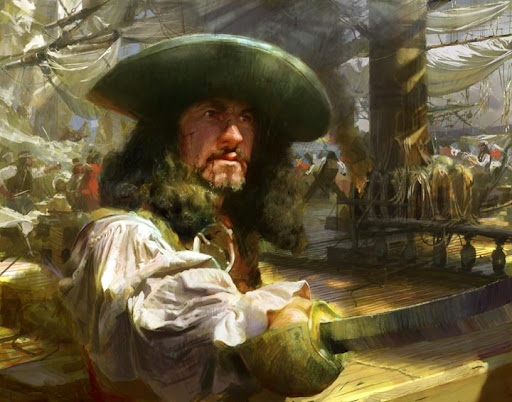 Announcing the 100th Anniversary Annotated Edition of Captain Blood: His Odyssey by Rafael Sabatini, an author who knew that standing up to injustice required not only courage and honor, but wit as well — and often a sharp sword too!

First published in 1922, this famous modern classic has sold millions of copies and has remained in print since its first edition. It has inspired acclaimed novelists from Norman Mailer (“But I never enjoyed a novel more than Captain Blood”) to George MacDonald Fraser, Arturo Pérez-Reverte, and beyond. The novel is timeless, its fans young and old.

It tells the story of Dr. Peter Blood, convicted of treason for treating a wounded rebel and sentenced to transportation in servitude to the Caribbean from whence he escapes, turns pirate, and, conflicted by his sense of honor and love for a woman who cannot forgive what he has become, scourges the Spanish Main. Notably, the novel, which has been continuously in print for almost one hundred years, inspired the 1935 film version that made Errol Flynn a star.

Far more than a mere historical swashbuckler of the common genre, this famous story argues that heroes can be fallible, admit mistakes, and still succeed; that life is a series of problems in search of honorable solutions; that although the world may be unfair, this is no reason not to fight to make it more fair—and that everywhere are villains, ranging from the those who tremble silently in deadly fecklessness to those who bluster loudly in brutal cowardice, and that humanity is always in need of those willing to stand up to them.

Such heroes have always been in demand, and some eras have mandated them for survival.

Our present era is one of them.

Right? This volume, when released, will have a place on the shelves in the captain’s quarters. It may require a guerrilla campaign to bring these pages to proper life. I’ll keep ye informed of when the crowdfunding raiding parties start recruiting.

Treasure Light Press is an indie endeavor, and a worthy one. Here’s their story:

Benerson Little — head researcher, writer, annotator, acquisitions editor, and general jack-of-all-publishing trades–was an early fan of Rafael Sabatini’s novels, Captain Blood in particular, ultimately inspiring him to become the author of five non-fiction works on piracy and sea roving, including The Sea Rover’s Practice, Pirate Hunting, and The Golden Age of Piracy. He is also the author of Fortune’s Whelp, a novel, and is at work on other works of fiction and non-fiction.

He was also the historical consultant to the STARZ network’s critically-acclaimed Black Sails television drama for all four seasons, has consulted or appeared on other television shows on the subject of piracy, and is at present the historical consultant to Firelock Games’s critically-acclaimed Blood & Plunder historical table top game, as well as Oak & Iron, a tabletop game of ‘historical naval battles set in the age of piracy.’ He has been a fencer for forty-three years, a fencing teacher for twenty-three, and is a former Navy SEAL, from his youth having sought swashbuckling maritime adventure alongside his aspirations in literature and history.

Mary Crouch – publisher, CEO, CFO, and editor-in-chief–is a specialist in Latin American and Spanish history and culture, and also in Spanish language education, having in her travels lived in or visited Colombia, Mexico, Panama, Costa Rica, Ecuador, and Spain. She has assisted in the research and pre-submission editing of several of Benerson Little’s books, is co-writing a book on the food and cooking of pirates and the Spanish Main with him (Latin American cooking is one of her hobbies), and is also an excellent writer and fencer.

Benerson Little and Mary Crouch are married with two children, Aidan and Eleanor. Benerson also has two adult children, Courtney and Bree, both of whom participate in various capacities in a variety of family ventures and adventures, including Treasure Light Press.

It’s the publishing equivalent of commissioning a periagua and setting out with a small crew and a trusty firelock and blade to pick off a small and vulnerable part of the market.