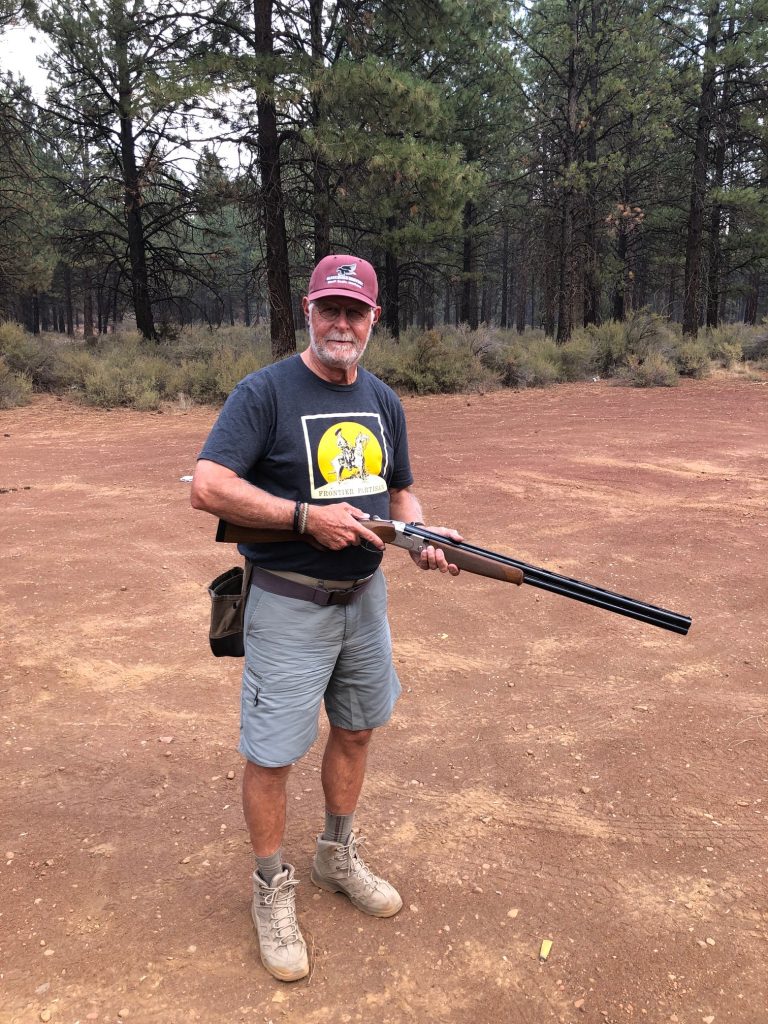 Rick Schwertfeger, on the hunt for the pestiferous clay pigeon…

My long trek through the blogosphere began when I joined a discussion forum dedicated to the works of Texas pulpster Robert E. Howard. Back in the 2000-whatevers, such forums were still the frontier of the internet. The sails of Facebook and Instagram and Twitter and all those platforms had not yet hove up over the horizon. Some members of the virtual tribe that grew up around that forum have become long-time friends, in that strange 21st Century manner in which we can build meaningful relationships with people we’ve never actually met.

The forum led to a stint as a contributor to the Howard-themed blog The Cimmerian, which planted the seed for a site of mine own.

When I started the Frontier Partisans blog in 2011, it was largely to serve as proof-of-concept for a book of historical vignettes. Obviously, it took on a life of its own, becoming a virtual campfire where like-minded people gather to swap yarns historical and folkloric and — best of all — blends of the two.

I’ve “met” some great folks through this blog, and I value the relationships that have taken root here. I continue to entertain the dream of a real-time/real-world Rendezvous of Frontier Partisans in some still-wild spot somewhere.

It’s been my privilege to actually get together several times now with Rick Schwertfeger, an early visitor to the Frontier Partisans campfire, who quickly assumed the rank of Captain of the Frontier Partisans Southern Command. Three years ago, he stopped in Sisters on a road trip, and in early 2020, Marilyn and I visited Rick and his wife Marcia when we were on a business trip to Austin, Texas.

Last weekend, Rick and Marcia made a five-day stop in Sisters on their extended summer trek into the Great Northwest. We did what Frontier Partisans do: We rambled the woods; we burned gunpowder; we ate meat; we sang songs; we yarned over whiskey and smoke. 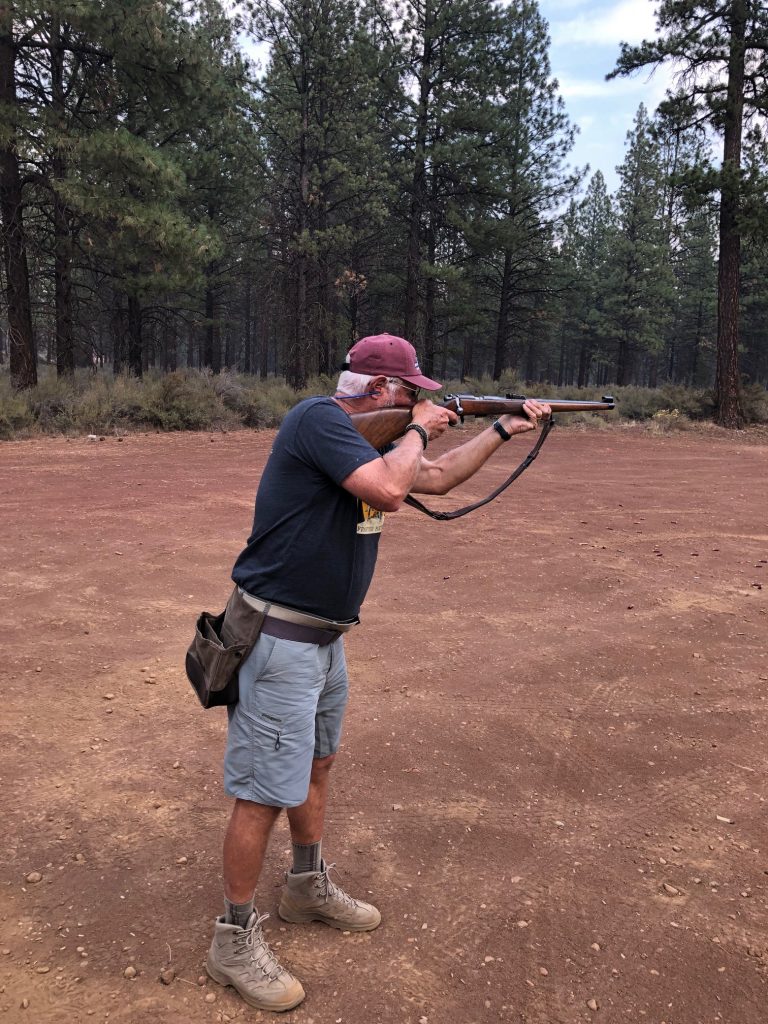 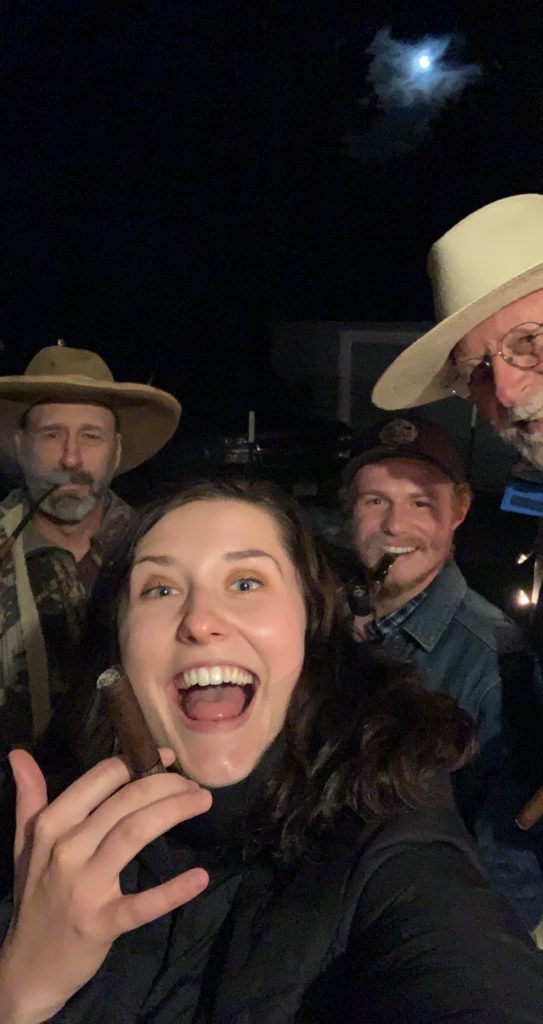 During our yarnin’ session on the back porch, Rick looked at me through a cloud of pipe and cigar smoke and said:

“You live a very rich life.”

“Yes, he does! And he needs to be reminded of that sometimes.”

Both hit the x-ring.

As I’ve written here, I am susceptible to growing grim and dour over the current course of human events, not least the “discovery” of this neck of the woods by a horde of people — a phenomenon for which I bear some responsibility. Like Daniel Boone, I helped “open up the country” — and now I’m bitching about not having enough “elbow room.”

My struggles to come to terms with the erosion of much that I value is real — as I do my best to take up the stance of Mattias Tannhauser.

Sometimes it takes a view from the outside to remind you that you’ve got it really good — and I do. I love my family ardently, and am proud of both Marilyn and Ceili in ways that even a professional wordsmith cannot properly express. I am privileged to indulge my love for Americana music with skilled and simpatico compadres. I have friends who are folk to ride the river with. I have built a campfire that has enriched the lives of others and mine own. And there is still solace and solitude in my woods, even if I have to work a bit harder than I used to find it. 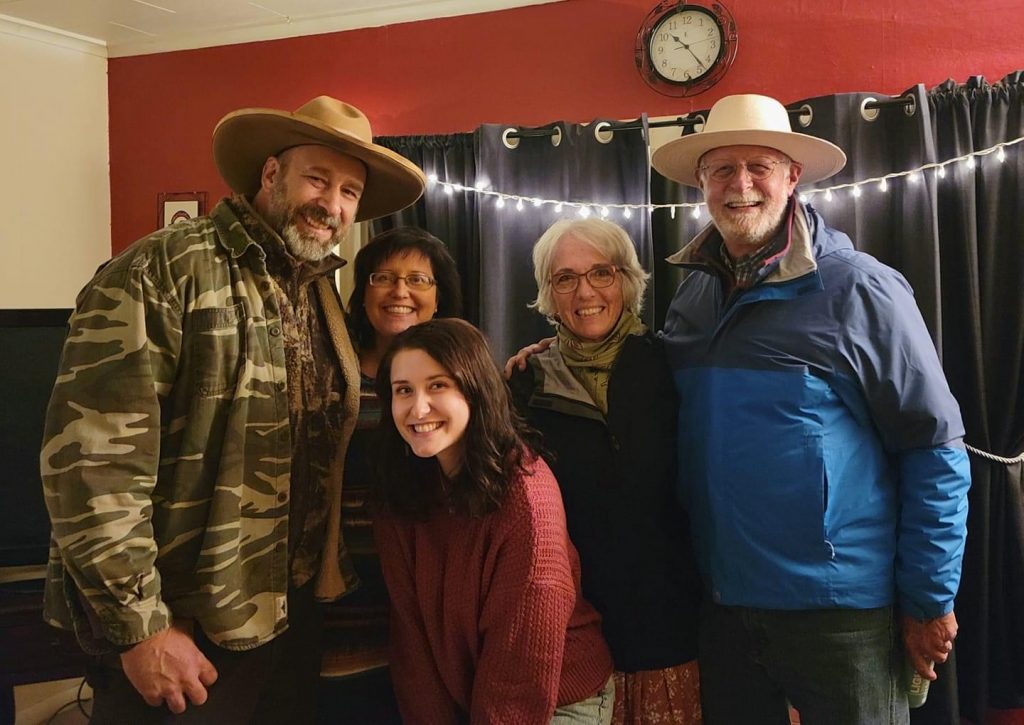 Thanks, all of you.

Marilyn and I capped off a fine few days with a ramble out to one of our favorite spots not far from Sisters. It’s a stretch of meadow and woods that is particularly evocative at this time of year. 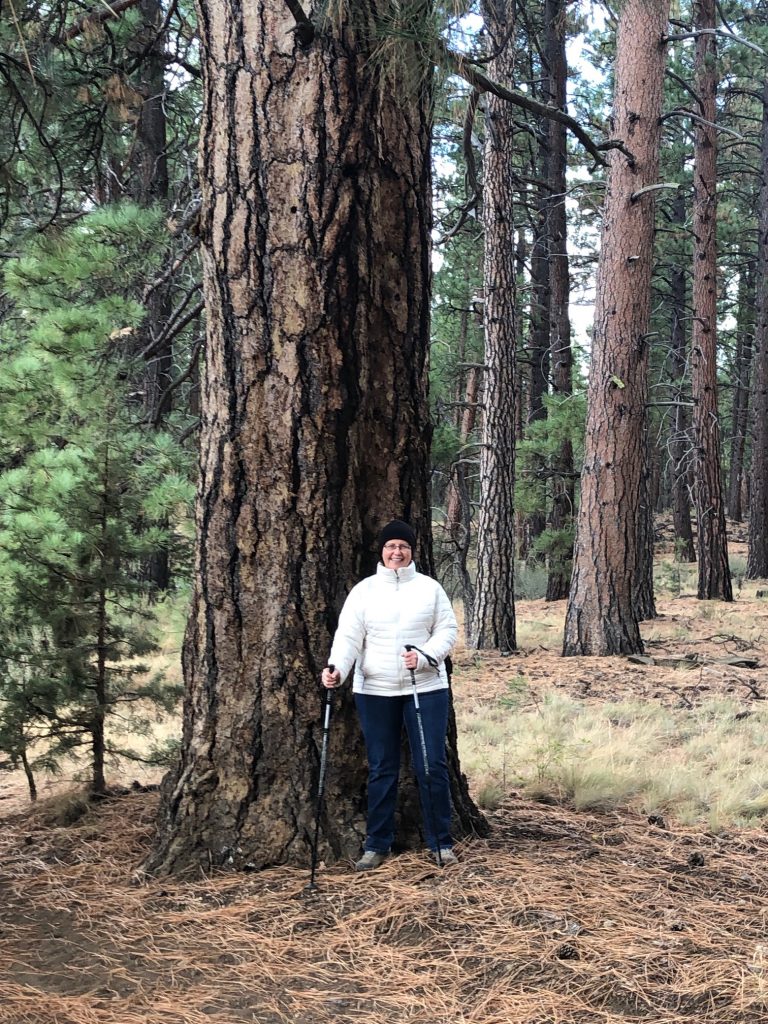 This venerable old pondo was probably here before the Declaration of Independence was signed. 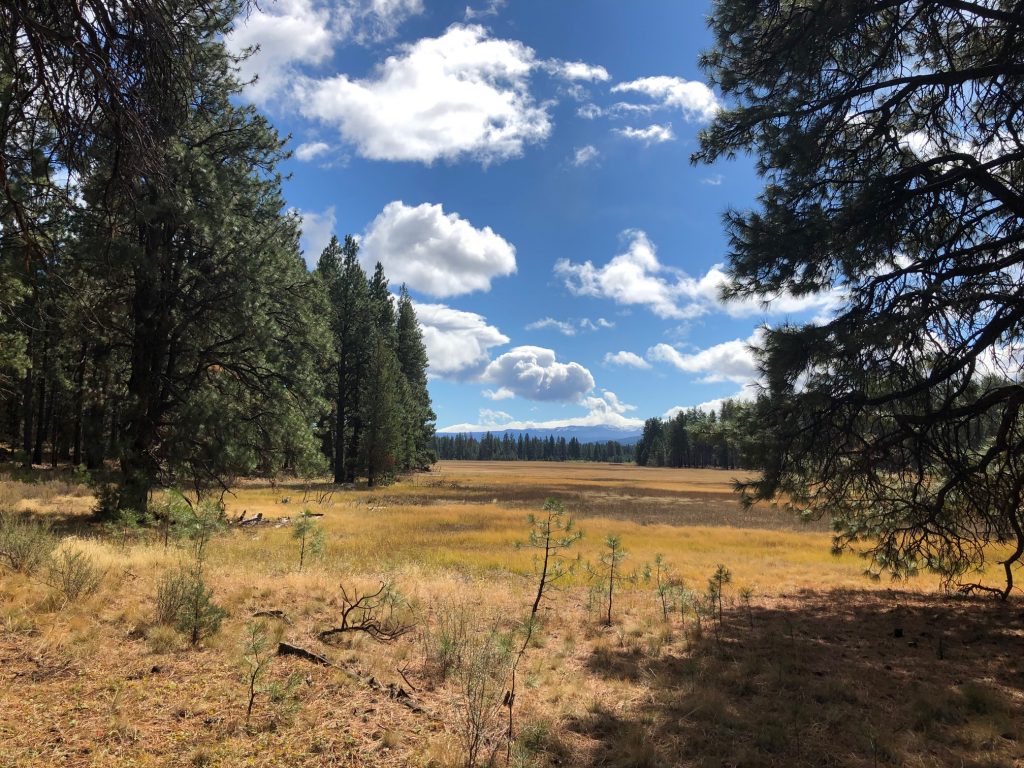 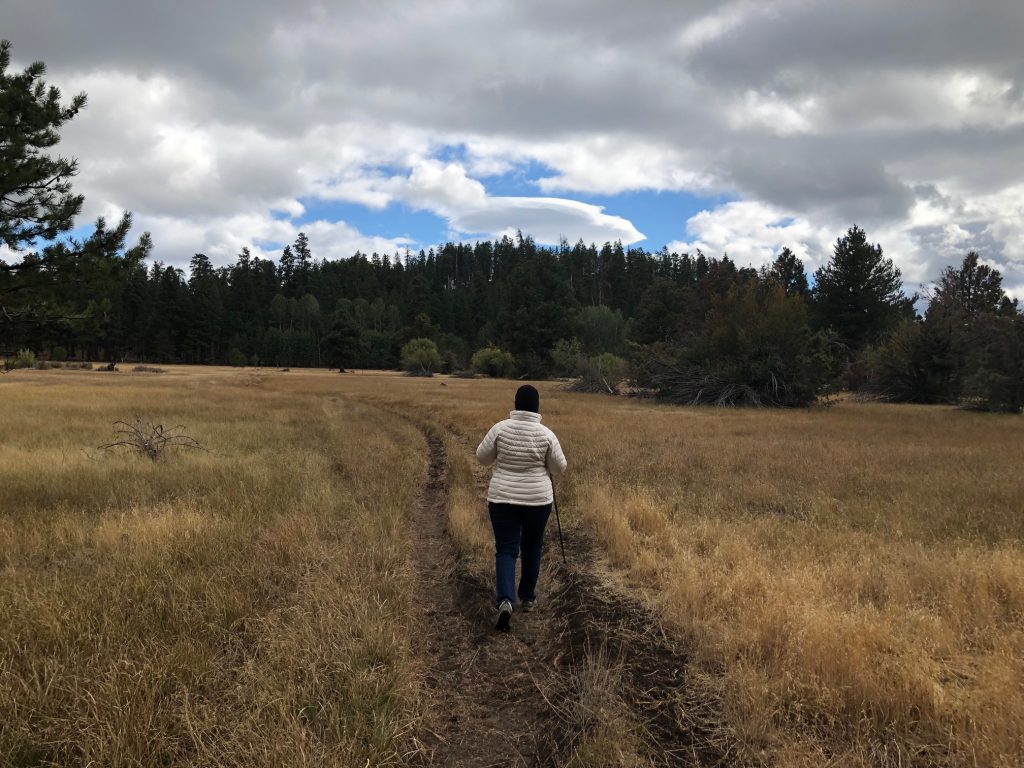 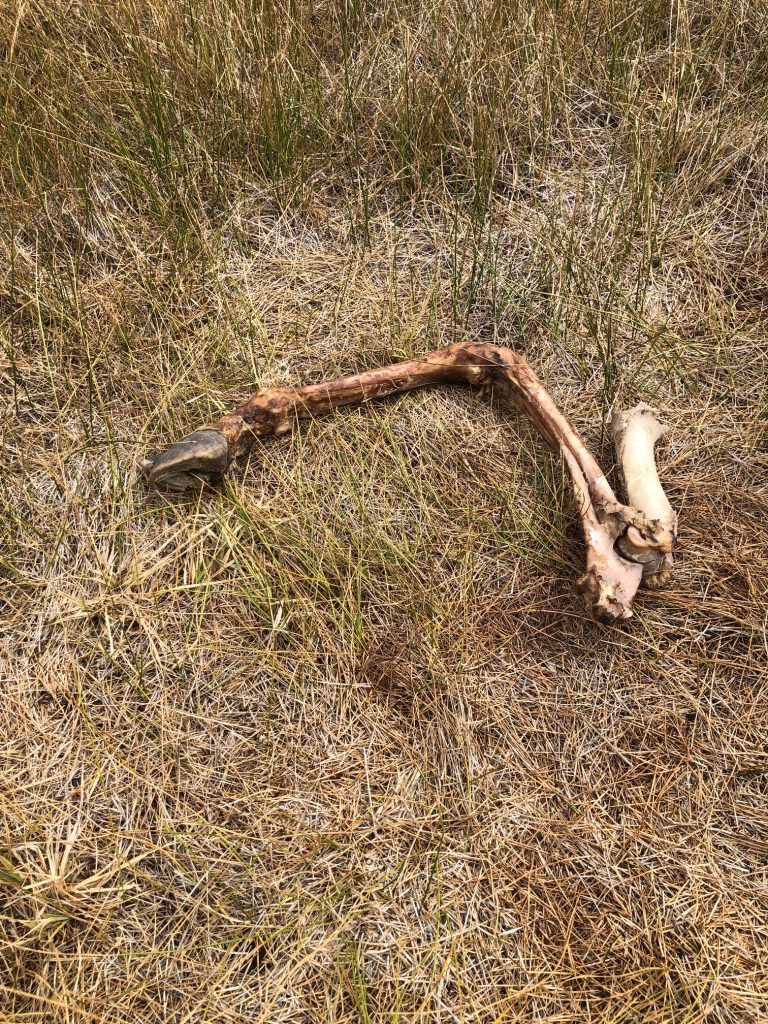 Somebody made a meal… 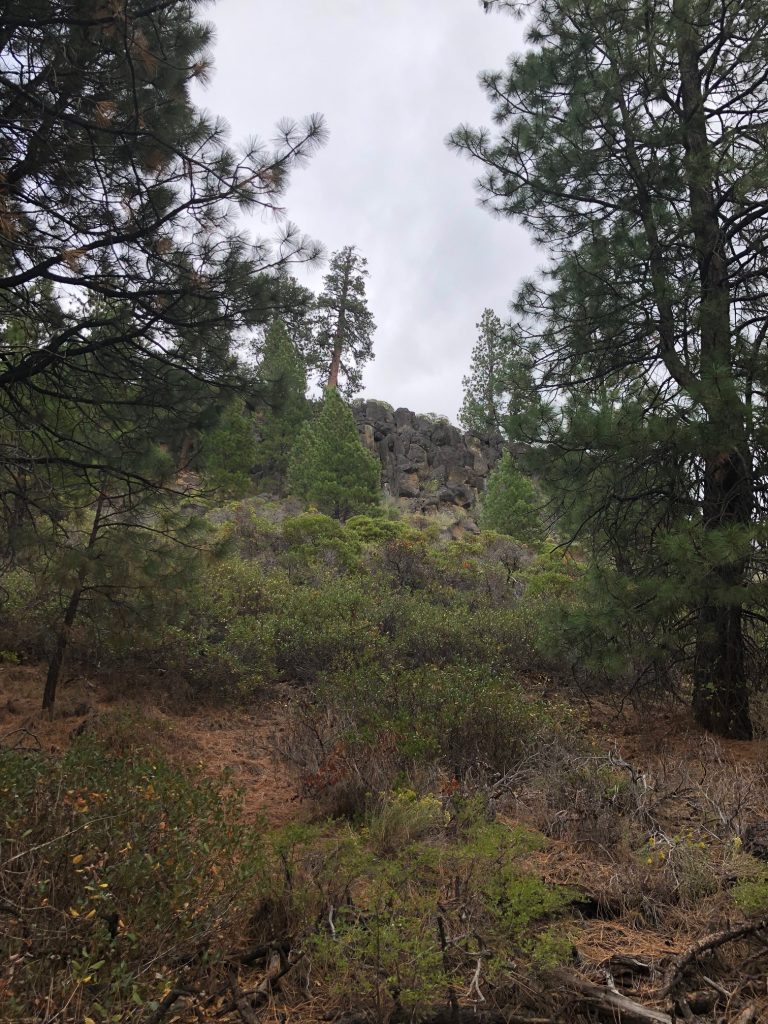 The ramparts of Turkey Knob.