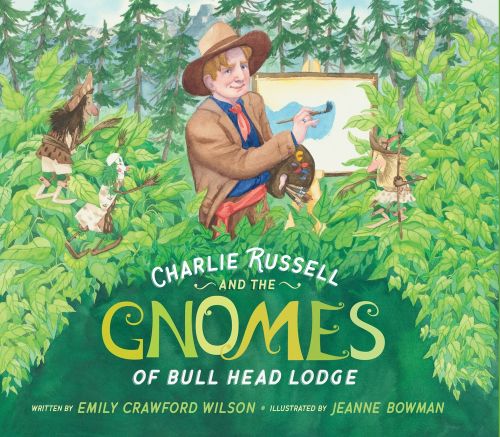 Don’t think I’ve ever mentioned a children’’s book on Frontier Partisans, but this one caught my eye from a post by Bob Boze Bell of True West Magazine.

Deep in the woods of Glacier National Park, artist Charlie Russell struggles to create his latest painting. With fellow artist Joe De Yong, he hikes into the wilderness to clear the cobwebs from his mind.

Just as the artists disappear from sight, three gnomes—funny little creatures that Charlie built from twisted branches and birch bark—POP! POP! POP! to life. They know how to inspire Charlie’s next masterpiece! Jumping down from the porch, they search the forest floor for just the right thing to jog his imagination.

Creating an afternoon of magical mischief, author Emily Wilson crafts a modern fairy tale based on the life of Charles M. Russell (1864–1926) and his many letters.

Illustrator Jeanne Bowman fills each page with the beautiful colors and wildlife of Glacier National Park, a landscape that still conjures awe in visitors today. 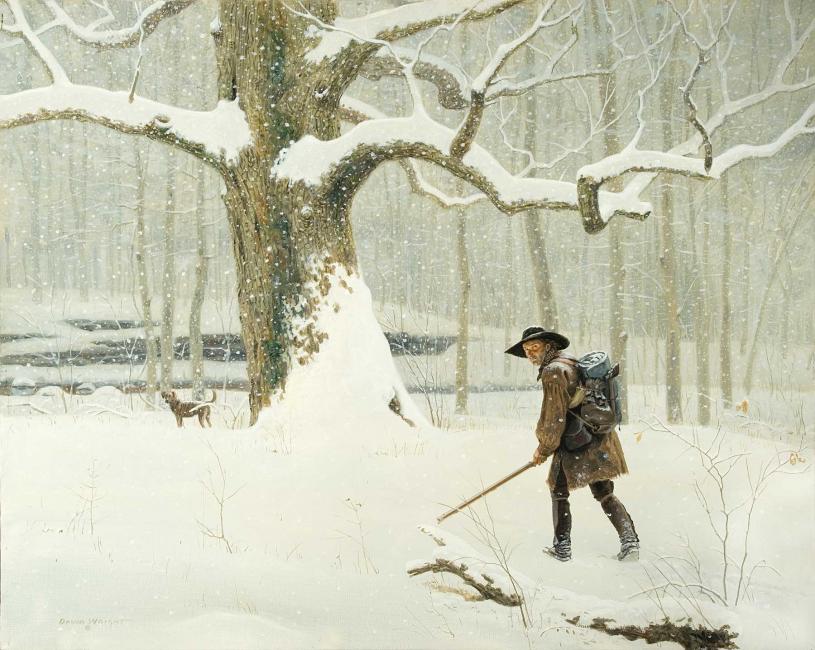 Daniel Boone is getting the Beargrease podcast treatment. I love this podcast and you will, too.

On this episode of the Bear Grease Podcast, we’ll be exploring a story as American as cornbread and black-eyed peas, we’re talking about one of America’s first heroes–Daniel Boone. We’ll sift through the myth and truth and discuss why the heck we’re still talking about him 200 years after his death. We’ll learn about the mechanism of archetypes, and Clay Newcomb will interview two New York Times best-selling authors Robert Morgan and Steven Rinella about their fascination with Boone. We’ll learn that the truth is wilder than the myth. This is part one of our series on Ol’ Dan’l Boone, and in it we’ll walk through the first 35 years of Boone’s life. You’re not going to want to miss this one.

On the episode of the Bear Grease [Render], Clay and the gang discuss an array of riveting topics including getting ninja kicked by a mule. They discuss how Clay got it wrong on the game warden story, and Kolby Morehead of Bear Hunting Magazine squeezes in a legitimate “bears, beets and Battle Star Galactica” reference. The guys are joined by writer Seth Haines, who was also a guest on the first episode of the Daniel Boone series. They discuss the tension created by Boone potentially having a Cherokee wife, and wrestle with “armchair valor” in saying how they wouldn’t have done it. The discussion is rich as they render down the first episode of the Daniel Boone series.

We’re on to part two of our series on the incredible life of the American backwoodsman, Daniel Boone. We’re going to dive deep into a topographic feature in the Appalachian Mountains that was a major player in the identity of Daniel Boone and America – we’re talking about the Cumberland Gap. We’ll interview two New York Times best-selling authors and Boone experts – Steven Rinella and Robert Morgan, we’ll nerd out with a geologist, we’ll talk about the potential of historical revision of Boone, and lastly, we’ll talk with a member of the Cherokee Nation, Professor Taylor Keen, and hear his perspective on the Ol’ Gap. The path is rough, and American identity is at stake. 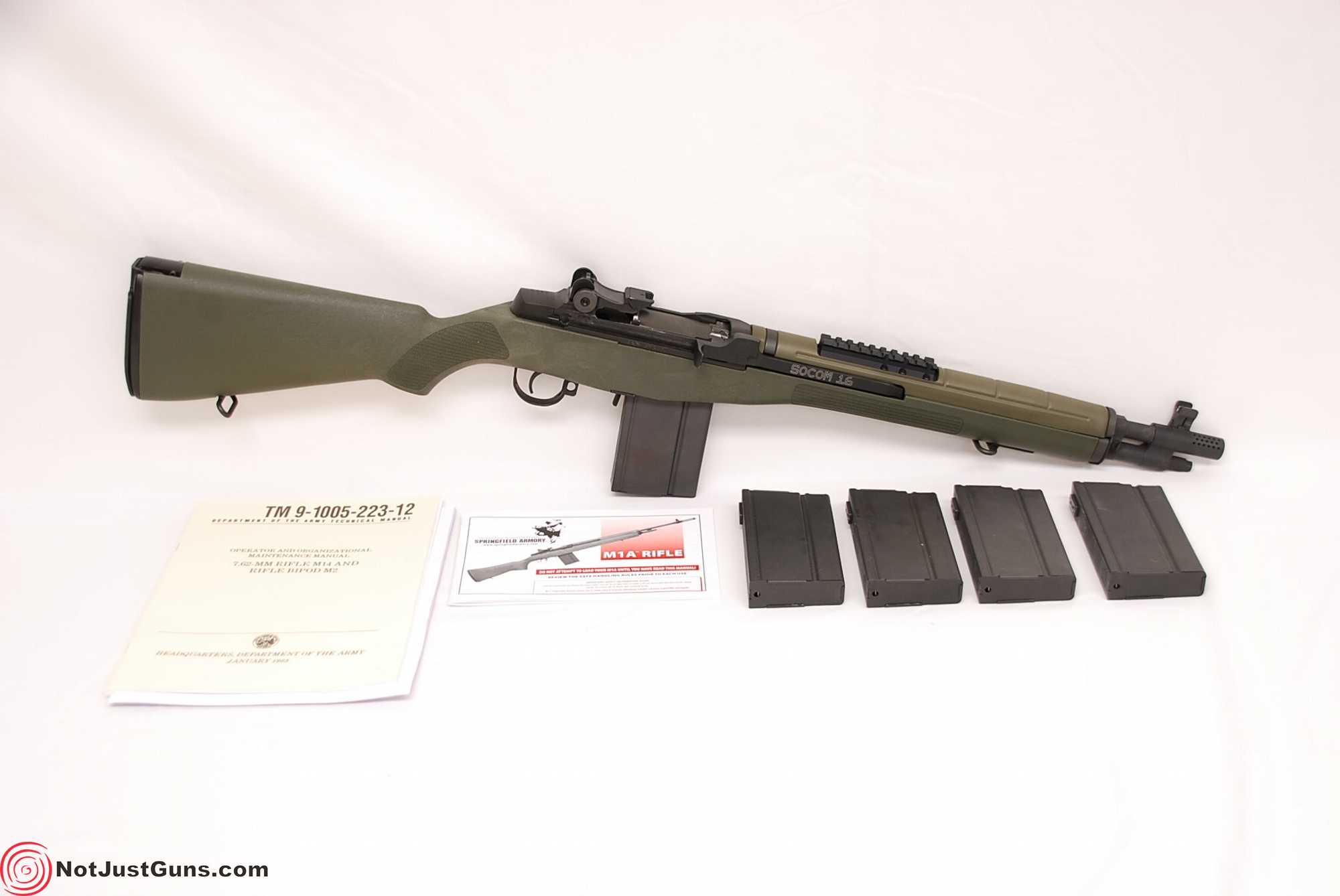 The Almighty Algorithm is out to get me. Explain to me how listening to pirate music (yes, I do… every day) kicks up a rifle? Now I have a bad case of the We-Wants-Its for a Springfield Armory M1A SOCOM 16. Sheesh. It’s really a gloriously utilitarian iteration of the Scout Rifle concept. Yes, I know Jeff Cooper specified bolt action. Hell, I’m generally more drawn to turnbolts. But this little piece of badassery speaks to me.

Speaking of guns, Pat Garrett’s .44-40 that sang the Song of the .44 to Billy the Kid in his last mortal moment sold last month for $6 million — double the expected price. Take rock-solid provenance and a myth that will never, ever die, and you have an irresistible temptation for some anonymous hombre with a few million burning a hole in his pocket. 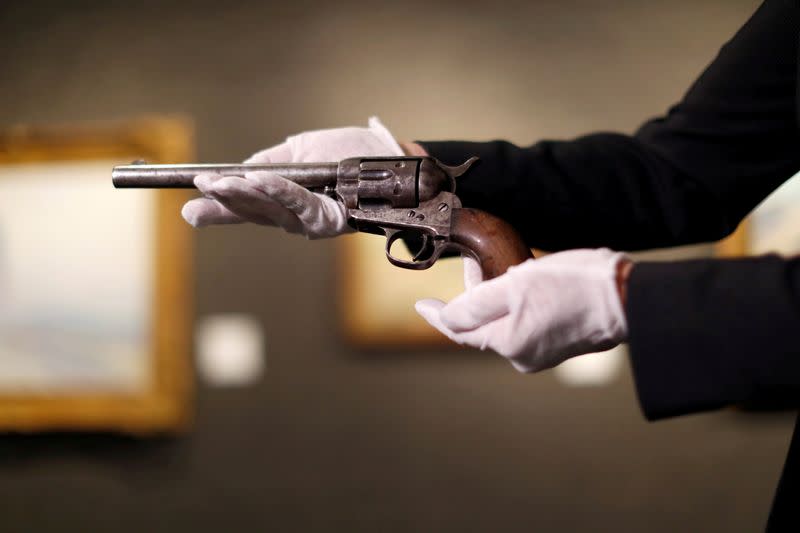 My friend Jeannie Gilgenberg Buck worked as a video editor on two of the six episodes of How To Be A Cowboy, which just dropped on Netflix. You can read about her work at The Nugget. 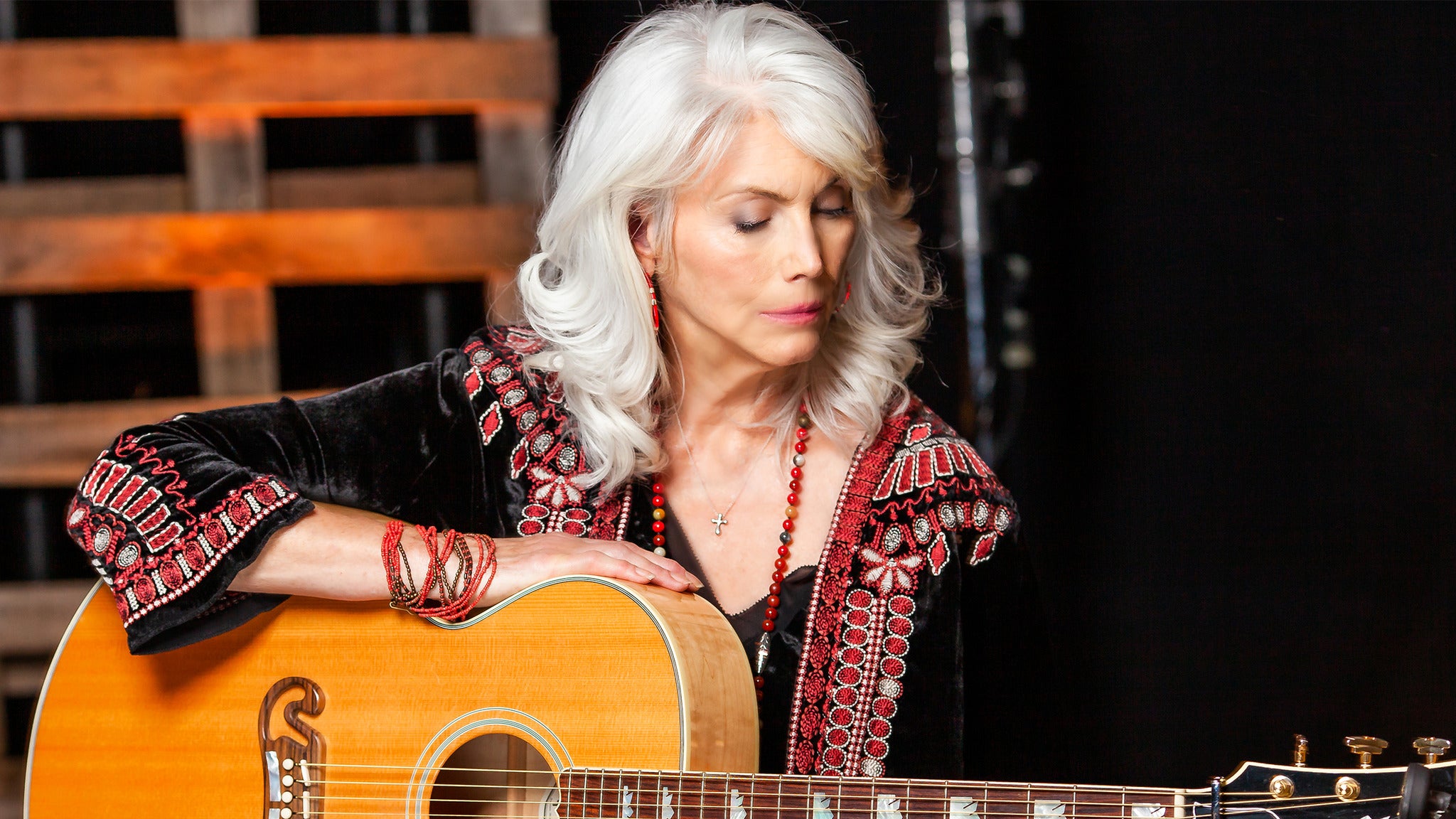 Back in the early 1990s, I was privileged to catch two shows by Emmylou Harris & the Nash Ramblers — one of them from stageside at the Crazy Horse Saloon, a first-class country music venue that graced Santa Ana, California, when such things were still possible. Absolutely phenomenal acoustic sets; I’ll never forget watching Sam Bush just ripping up Robert Johnson’s Crossroads Blues on the mandolin. Smokin’…

I’ll be grabbing this right off the virtual presses:

Emmylou Harris and the Nash Ramblers’ Ramble in Music City: The Lost Concert is due September 3 on Nonesuch…

The album features the 1990 Nashville debut of the acoustic all-star group—Sam Bush, Roy Huskey Jr., Larry Atamanuik, Al Perkins, Jon Randall Stewart—at the Tennessee Performing Arts Center. The concert was recorded and shelved until now, when it’s been unearthed and will be released for the first time. The set features entirely different songs from the band’s acclaimed live album At the Ryman, with music by A.P. Carter, Rodney Crowell, Ruth Franks, the Louvin Brothers, Doc Pomus, Paul Simon, Townes Van Zandt, and Harris herself.

Harris says of Ramble in Music City: “When James Austin, in my humble opinion, the world’s best and certainly most devoted music archeologist, unearthed the tapes of this ‘lost’ concert, I was taken aback by their very existence, like finding some cherished photograph misplaced so long ago the captured moment had been forgotten. Then the memories came flooding in, of the Nash Ramblers, hot off the road from our first tour, ready to rock and bringing their usual A-game to the hometown turf.

“It only took one listen to realize not a single note was out of place or in need of repair, a truly extraordinary performance by these gifted musicians. What a joy it was to share the stage with them.”

And here is a wonderful recent interview.

Roses in the Snow from Austin City Limits: