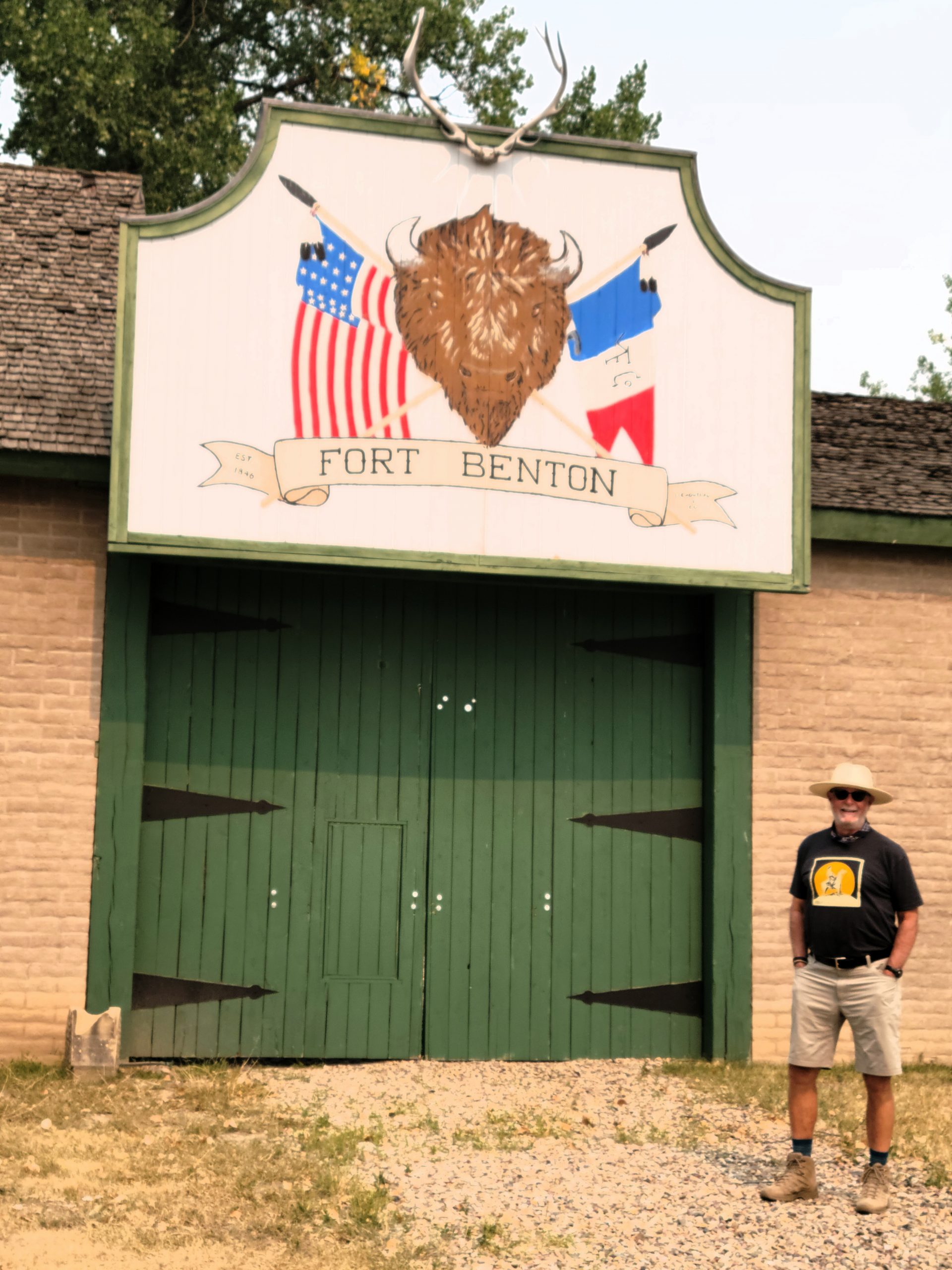 Captain Rick Schwertfeger shows the colors at one of the most important sites in Frontier Partisan history.

On a quiet summer Sunday a Frontier Partisan and his wife walk along the path between the north bank of the Missouri River and the main street of Fort Benton, Montana.

Place and Time being what they are, it’s curious to experience such a quiet, peaceful, pleasant scene, knowing that one hundred fifty years before we would have been amidst a bustling, raucous center of commerce and transit — the most important gateway to Montana and the American northwest. The overland journey from St. Louis, Missouri, to Montana required four to six months of hard, sometimes dangerous travel. Ah, but the Missouri River — first ascended by Lewis and Clark’s Corps of Discovery in 1804-05 — was the far faster route. First by keelboats, men and material made the trip in much less time.

Even though legendary Montana pioneer Granville Stuart called the Missouri “the longest, crookedest, muddiest, coldest, and most monotonous river in the world,” it was preferable to the overland journey. 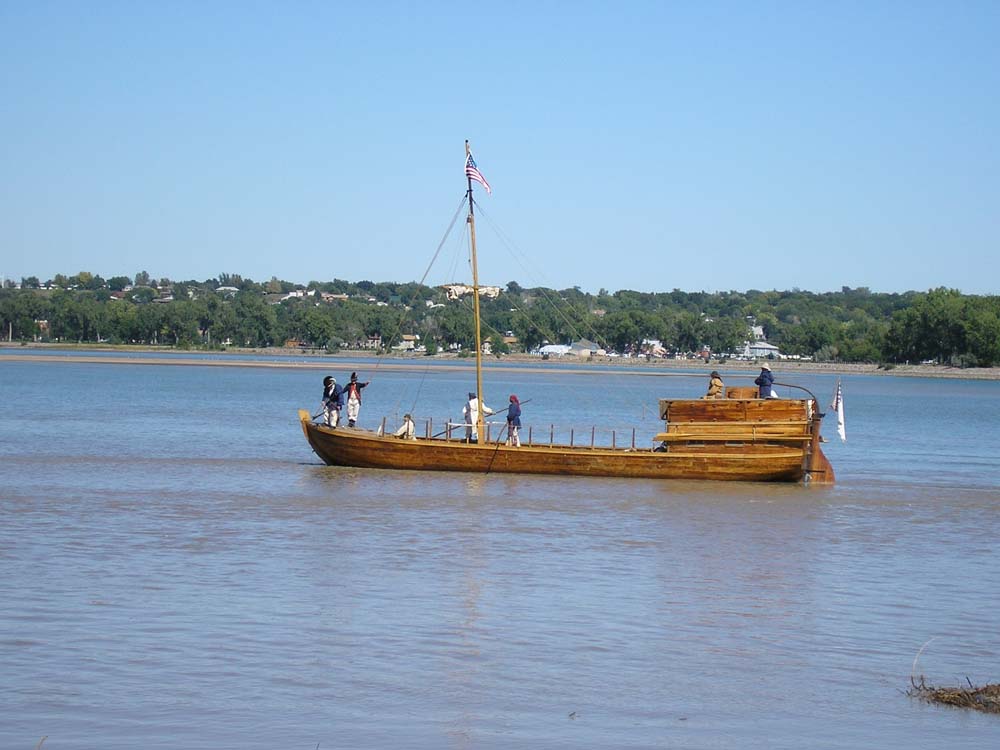 The Corps of Discovery used a specially designed keelboat from St. Louis to the Mandan villages, where they spent the winter of 1804-05. It took tremendous manpower to move the 55-foot craft upriver! Others, too, utilized keelboats on the Missouri, especially for transporting people. A keelboat could expect to make about fifteen miles a day upriver. At that rate the trip would take about seventy-three days. In 1811 a select crew under Spanish-American frontiersman Manuel Lisa, co-owner of the Missouri Fur Company, set the keelboat upriver record, covering the 1,100 miles in 61 days!

A replica of the keelboat Mandan sits on the historical trail that my wife and I walked. It was used in the 1952 movie version of A.B. Guthrie’s classic novel The Big Sky. 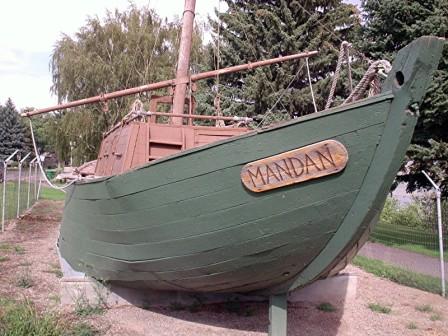 Steamboats quickly joined the mix of boats chugging upriver; and by 1820 mostly had supplanted keelboats. Eventually, steamboats made the trip in about seven weeks. Steamboats were workhorses of the fur trade. And it was in the fur trade that Fort Benton got established, originally as an American Fur Company outpost in 1846. In 1850, it was named for Missouri Senator Thomas Hart Benton. Agents from Fort Benton aimed to lure the Blackfoot trade away from the Hudson’s Bay Company in the titanic battle between the two companies to control the fur trade. 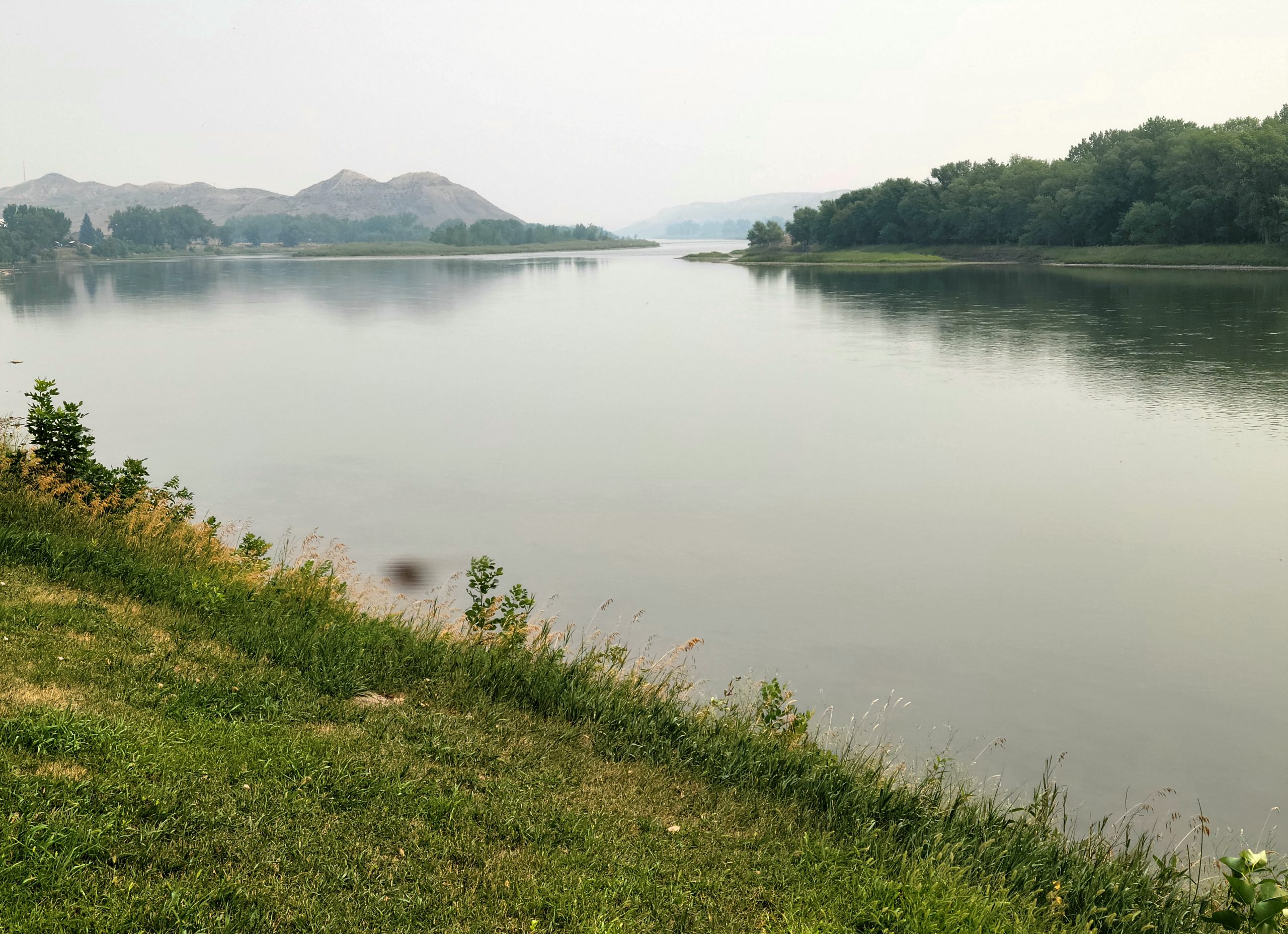 Looking downstream, you can almost see a steamboat chugging up the river…

In the 1860s, Fort Benton “became a boomtown as gold seekers and cattlemen, on their way west, used it as a supply point.”

For example, Granville Stuart’s brother and partner James Stuart made round trip journeys from their home base in Deer Lodge Valley (now the Clark Fork Valley) all the way to Fort Benton to pick up both mining supplies and goods that they bought to sell in their retail stores.

Eventually, 75 percent of the supplies for Montana and the northwest territories were off-loaded at Fort Benton. “Whiskey, salt, bacon, boots, gold pans,” pickaxes and shovels were typical supplies. Hundreds of miners with gold fever disembarked at Fort Benton and took overloaded stagecoaches over primitive roads all the way to the gold fields around Bannack and Virginia City, Montana. That distance is 250 miles over good roads today. It certainly was farther and a rough passage in the 19th century. And the gold those miners dug frequently was shipped east through Fort Benton. In 1866, one steamboat headed downriver with a cargo of 2-1/2 tons of gold dust valued at $1,250,000. The boat was manned by a contingent of armed miners. 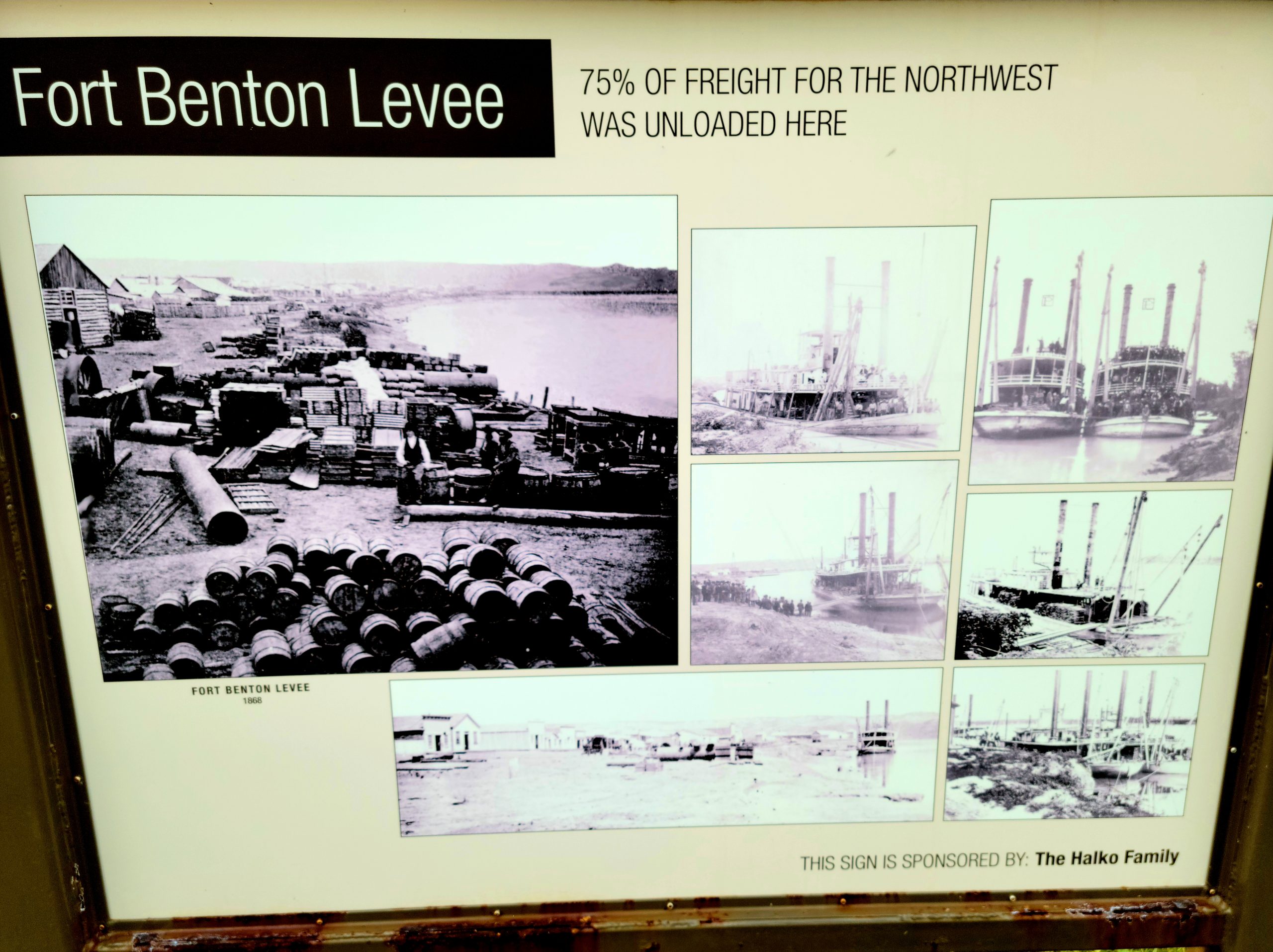 Commerce was so strong that one company, I.G. Baker, “became the giant among mercantile businesses.” It “went into banking, transportation and distilleries.” The company was so dominant that “their freight wagons cut trails in all directions,” on both sides of the American-Canadian Medicine Line.

“Indians trapped for them, miners and Indians guzzled their booze, they ran their own steamship line, and peddled their goods for buffalo robes, wolf skins, and gold dust.”

Finally, in 1891 the Hudson’s Bay Company bought out I.G. Baker’s stores in Canada. A “gleeful” Hudson’s Bay Company “director drank a toast ‘to the end of a firm that cut our dividends from pounds to shillings.” And more broadly, the ringing sound of sledge hammers driving spikes into railroad ties sounded the death knell of Fort Benton as well.

As we continued our pleasant historical walk, we discovered what kind of boomtown Fort Benton had become by 1867. For we reached the street that was THE BLOODIEST BLOCK IN THE WEST! New comers to Fort Benton’s Main Street were told:

“Walk in the center of the street and keep your mouth shut.”

“A few gunslingers who walked this street earned reputations, but more earned eternity than in other fabled western towns. The block was lined with barrooms, cathouses, and gambling dens that stayed open all night. Poker was played with six-guns atop the table. Females from the brothels were as tough as the men. Eleanor Dumont, a.k.a. Madame Moustache, brandished Colts to halt the landing of a steamboat carrying smallpox. It was so lawless that a cavalry troop encircled it so a U.S. Marshall could serve warrants on five residents.” 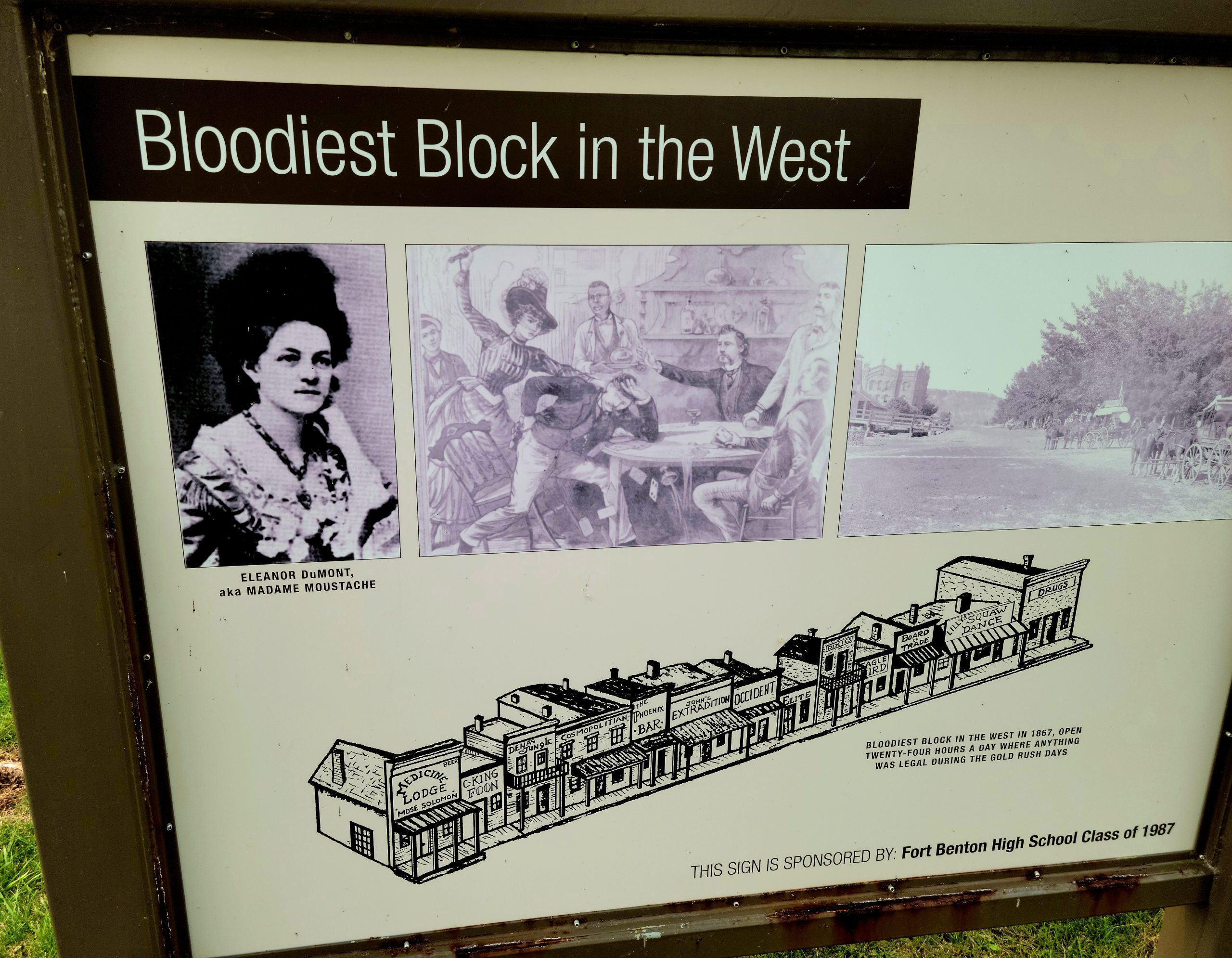 Today, Fort Benton is a pleasant, but quite small town in Montana’s huge wheat growing region, the Golden Triangle. It’s far from Montana’s population centers except for Great Falls, an hour upriver. As confirmation of how things can change with time and historical evolutions, over lunch at the enjoyable Golden Triangle Brewery, I asked the friendly co-owner/barkeep, “What’s there to do here in winter?” Her immediate reply: “Nothing.”