When we think of the tools of the early hunters on the southern African veld, we think first of firearms: the mighty muzzleloading roer, perhaps an English double; Frederick Courteney Selous’ Holland & Holland…

A “salted” horse — one that had survived the sleeping sickness brought on by the bite of the tsetse fly and was immune to its bite — was a valuable asset.

But the key piece of equipment that made professional hunting in the interior of southern Africa possible was the ox-drawn wagon. 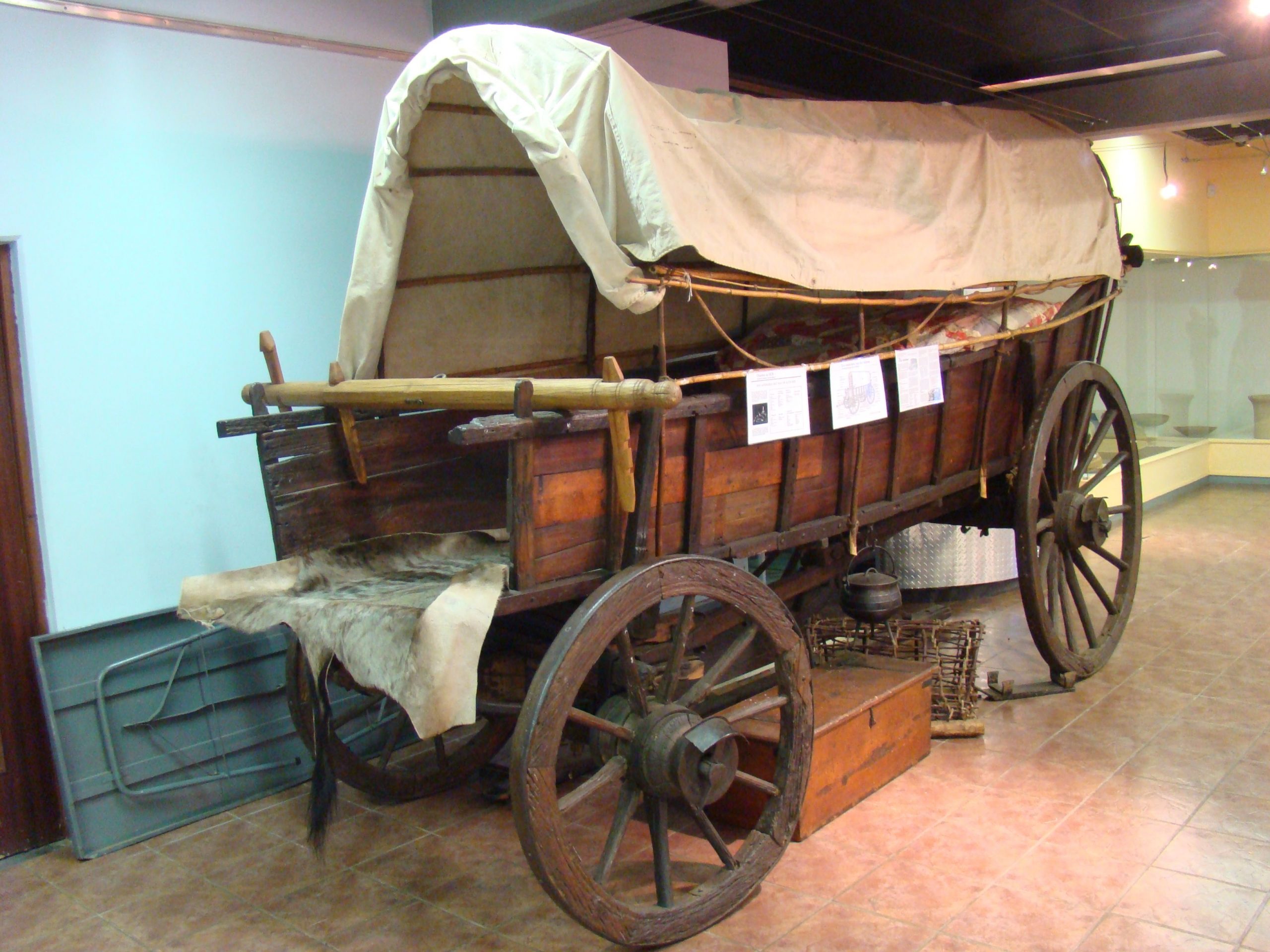 Trekking Boers lived in them semi-permanently, and forted up on the open veld in squares of interlocked wagons called a laager. The Great Trek in the 1830s, when Boers fled British authority to found republics north of the Orange and Transvaal rivers, turned the wagon into an Afrikaner national symbol. 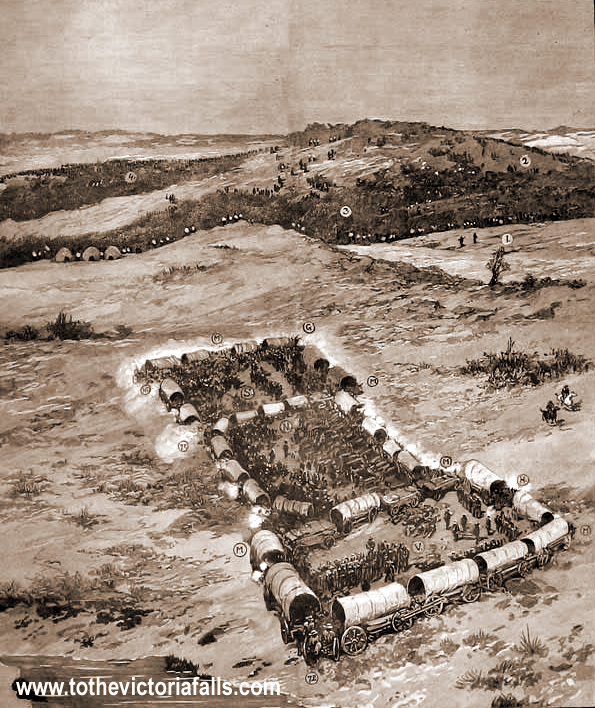 Of course, it wasn’t just Boers who used the sturdy wagons developed in the Cape in the 18th Century and perfected by the 1870s. The famous picture of Selous that graces the masthead of Frontier Partisans shows him in camp next to his wagons. 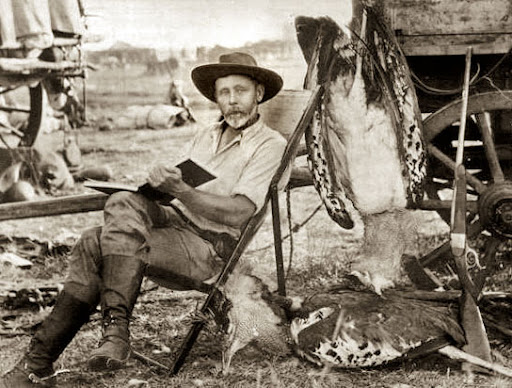 The great English hunter writes fondly of the comforts of his sleeping wagon in his memoir A Hunter’s Wanderings in Africa.

The wagons were comfortable for sleeping — up off the ground where the critters were, with a mattress suspended on a hammock of rawhide… A well-appointed wagon made nights on the veld something close to “glamping.”

The Ndbele (Matable) King Lobengula liked wagon living so much that he simply parked a wagon in his capital at Bulawayo and presided over his kingdom from it, sleeping there most nights. 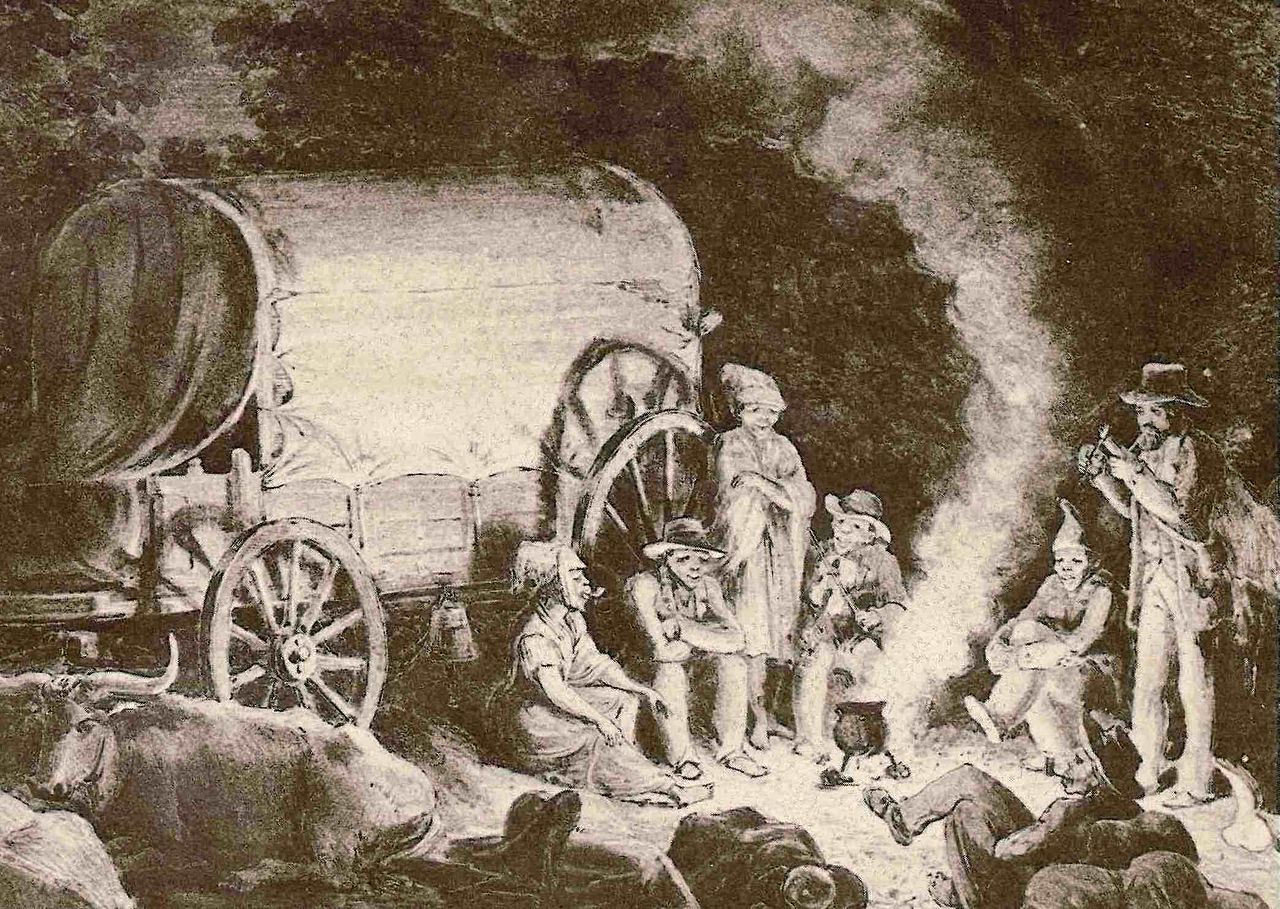 T.V. Bulpin offers a fulsome paean to the hunting wagon in To The Banks of the Zambezi:

It was certainly quite incredible how these lumbering, ungainly vehicles were dragged into country so remote and rugged as to be totally impenetrable to any modern mechanical means. The stringing spans of oxen have a place in the story of Africa, which is beyond words to describe. 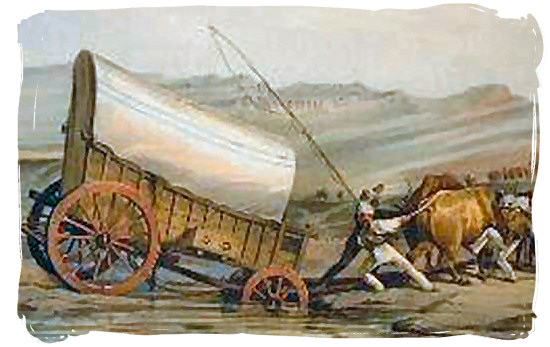 The type of buck wagon in use in the 1870s was built to accept as normal the most appalling terrain. Most of them never knew a made road. Loaded with 6,000 pounds of goods and drawn by 14 oxen, these cumbersome contrivances could be induced to overcome obstacles of mountain, river and sand, which would have soon reduced to the scrap heap anything of lesser heart. Hard to break, they were easy to repair, even in the most awkward places, and with no tools other than the standard jack, hammer, and pot of grease. Cursed by many for their tedious, bone-jolting traveling rate of two-and-a-half miles an hour, nobody ever managed to devise anything faster or better. And certainly nobody made them better than the famous wagonmakers of Paarl and Worcester in the Cape. From their works came the pride of the vehicles whose wheels left the whole wild interior of southern Africa scarred with ruts and skid marks.” 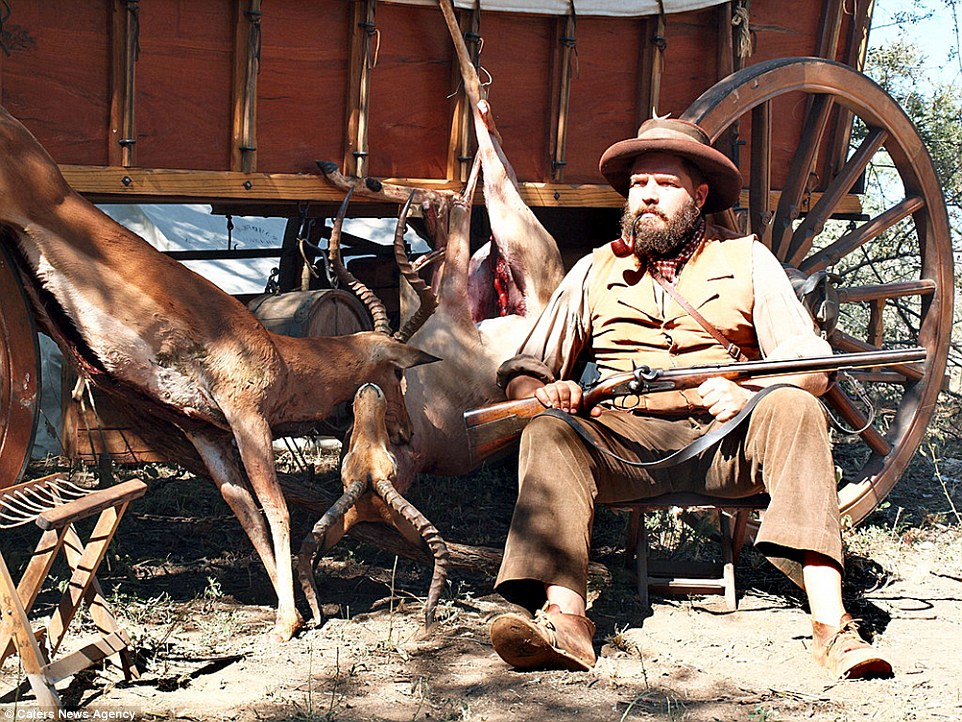 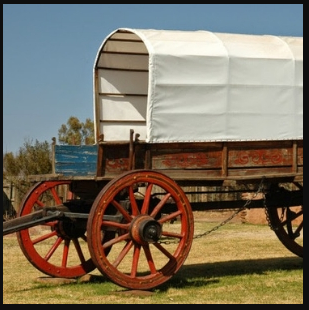 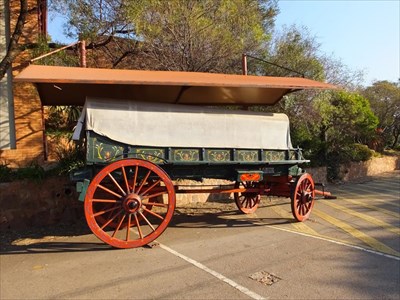 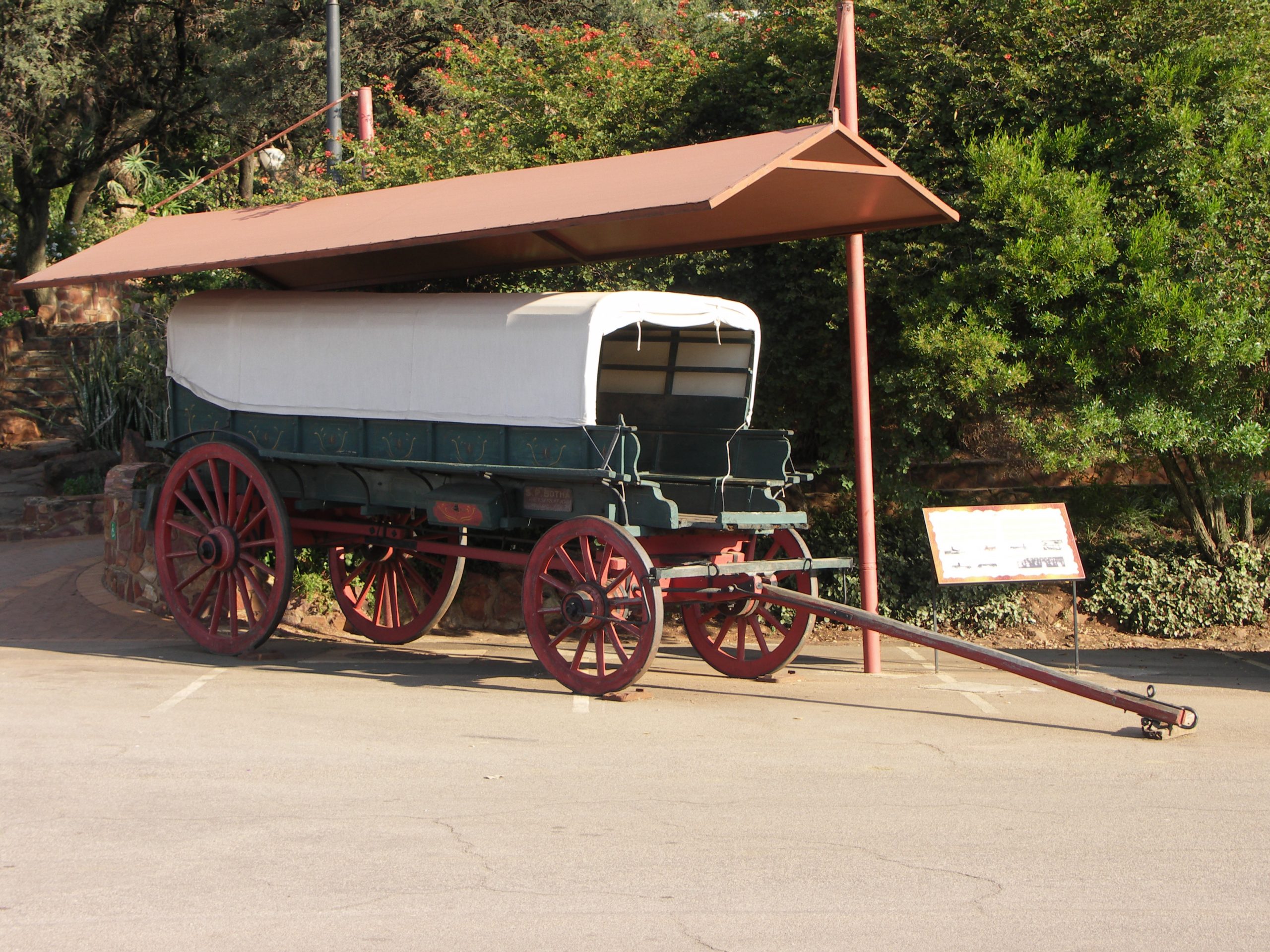 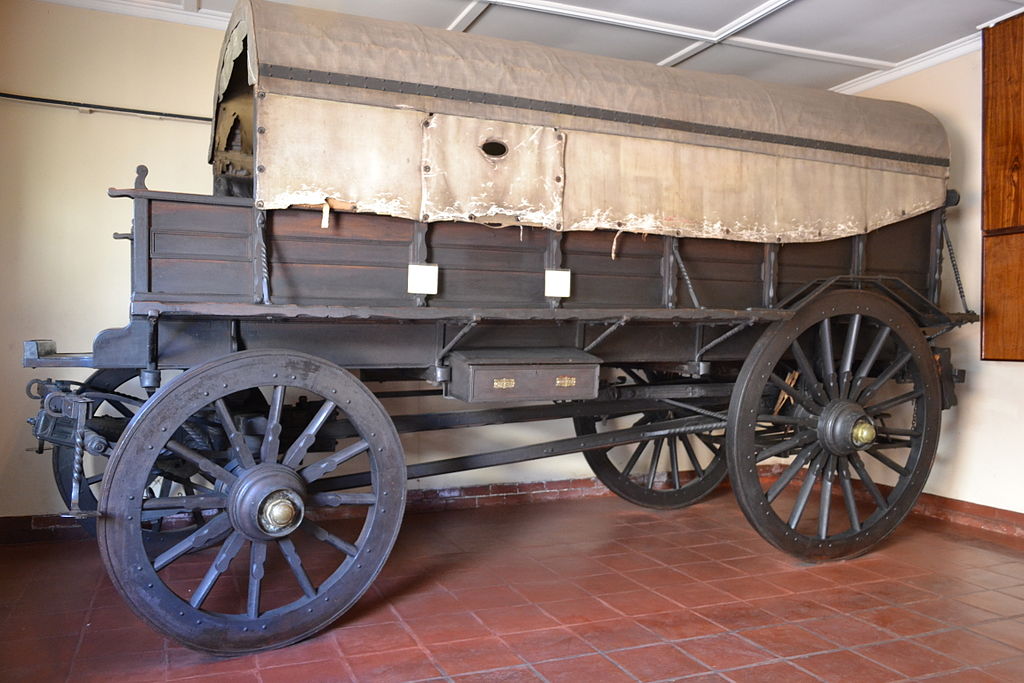