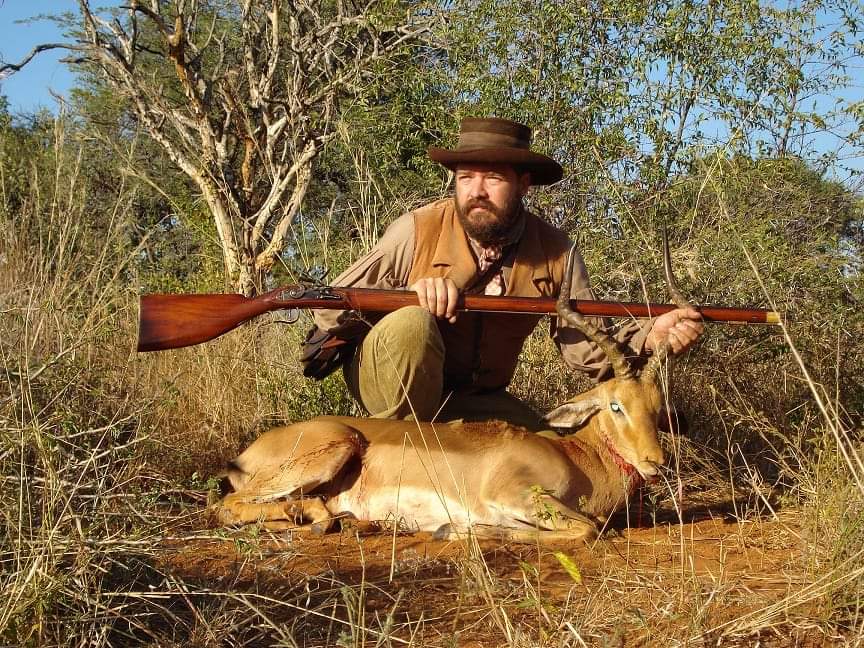 Boer historical reenactor MC Heunis with an impala taken with a replica of a Dutch musket, 11 bore (.75 caliber). The flintlock was by far the most common ignition system on the frontier in the 1830s and even int the ’40s, despite the advent of the percussion cap.

The South African historian and historical reenactor MC Heunis recently posted on social media a shot of himself with an antelope taken with a replica of a Dutch flintlock. He noted that the weapon would have been common among Boer frontiersmen in the period 1835-45.

That got me to pondering upon the long reign of the flintlock on the frontiers of the world. By the period Heunis references, the somewhat more reliable and slightly faster percussion cap lock was on the scene — yet the flintlock persisted.

Here’s how the flintlock works:

The percussion lock replaced the loose priming with a contained copper cap that contained fulminate of mercury. Struck by a hammer, the cap would explode, directing a charge down a hollow nipple to ignite the powder in the barrel:

There are a few reasons why the flintlock remained the ignition mechanism of choice on the frontier, even when a purportedly superior system was available: Many frontiersmen, be they mountaineers of the Rocky Mountain Fur Trade or Boer hunters of the southern African veld, were wedded to the tried and true. A man who made his living and protected his life with his rifle might not be inclined to mess with a system that worked, and for a skilled, experienced man, a flintlock doesn’t really give up that much in performance to a caplock.

“…Percussion Locks will not do at all for the Rifles, and I beg you will be most particular in selecting the Flint Locks required, price being a secondary consideration.”

A trapper or professional hunter was unlikely to simply give up on a faithful gun that still got the job done to spend hard-earned money a new piece with a new-fangled ignition system. Conversion was an option. In the settlements, it was relatively easy and inexpensive to convert a flinter to percussion, but it took a while for percussion locks to filter out to far-flung trading outposts where a smith might do the work.

Consequently, percussion caps took a while to make it into trade inventories in because there weren’t that many percussion guns in the field. The spotty availability of caps was a disincentive to upgrade, etc…

It wasn’t until the 1840s that percussion locks started to really replace the flinter.

So, if you roll back the years from the 1840s when the flintlock began to exit the scene to the development of the “true flintlock” by French inventor Marin le Bourgeoys c. 1615, you have about 225 years or so in which the flintlock reigned supreme. We’ve only been shooting cartridge guns for, say, 160 years or so.

Intrigued by Heunis’ replica, I went of on a search for Dutch Boer muskets and found this:

It’s a big bore, straight-rifled piece called a Bobbejaanboudt — which means “baboon haunch,” a reference to the shape of the butt. It bears some resemblance to the old buccaneer muskets.

Straight rifling is weird. Supposedly it stabilized a patched ball better than a smoothbore, but less well than spiral rifling. Which begs a question, doesn’t it? Straight rifling was also considered a good way to stabilize a shot pattern, so it may have had value for a dual-purpose piece.

Some Bobbejaanboudt were smoothbores. As we have discussed elsewhere, smoothbores were a popular weapon for Frontier Partisans cross the globe — far more common than rifle-fetishizing legend would lead us to believe…

I used to do a lot of flintlock shooting. I once had a .45 caliber “McCoy” rifle with a lightning-fast L&R flintlock. It was very reliable if you primed it right (not too much in the pan), and, by Crom, that gun could shoot plumb center. I sold it to a feller who paid top-dollar for it and won many a subsequent gong shoot with it at Rendezvous. That rifle was a fine example of why the flintlock reigned supreme for so long — it got the job done.