Mi compadre Lynn Woodward has insisted that we break out my original Song of the .44 this summer. The song recounts the short life and violent death of Billy the Kid. I wrote it years ago, late one night after watching The Godfather for the umpteenth time. I’d been reading Robert Utley’s Kid bio, and realized that the Lincoln County War was just a Cowboy Mafia War, which perked up the Muse. Been a while since I’ve had it in the repertoire, but now it assumes a new relevance…

LOS ANGELES, July 21 (Reuters) – One of the most iconic weapons of the American Wild West goes up for auction next month with the sale of the gun that killed 19th century outlaw Billy the Kid.

Sheriff Pat Garrett’s Colt single action revolver is expected to fetch between $2 million and $3 million at auction, Bonhams auction house said on Wednesday. He used the firearm to take down gunfighter Billy the Kid in 1881 after a months-long pursuit,

Bonhams described the gun as “the most iconic treasure of early Western history” in the United States.

The gun comes from the collection of Texas couple Jim and Theresa Earle who amassed Western firearms and other artifacts for some 50 years. Jim Earle died in 2019, and his family is now selling the collection. 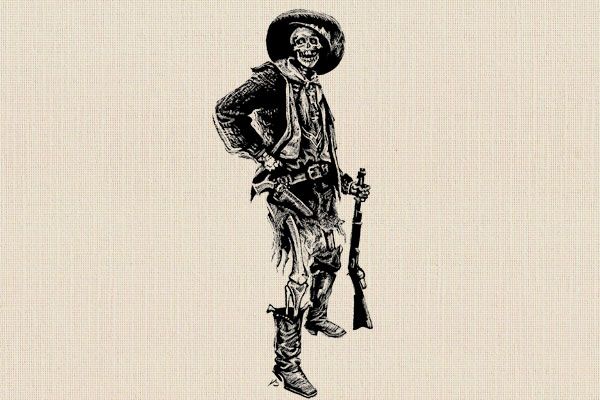 Side note: After performing the song at an event in Sisters one night, a feller approached me to inform me that I had the song wrong, because Billy the Kid used a .41 Thunderer. I explained to him that the Song of the .44 is the concussion of Pat Garrett’s .44-40 revolver in Pete Maxwell’s bedroom in Fort Sumner, blowing a big hole in Billy’s chest. The dude was not pleased to have his pedantry parried, but there was a fine outcome. My friend, the late, great Dave Carter, a masterful songwriter, pulled me aside and quizzed me on the .41 Thunderer. A few months later… this….

Which just goes to show ya — it’s just not safe talking about anything in front of a songwriter.

Reader Padre recently completed Black Barrel Media/Legends of the Old West’s podcast on Billy the Kid and the Lincoln County War. It’s a deep dive, and — as always — very well done. You can find it here or wherever you listen to podcasts.