Given that the whole damn West is burning, and the Republic seems to be careening into a ditch at highball speed, it’s all too easy to fall into a pit of despond. That won’t do. When you feel yourself on that slippery slope, you’ve gotta fashion a rope ladder and climb the hell out. Last week, Clan Cornelius unfurled a figurative banner that read: “Under the Big Sky or Bust!” and rolled out for Whitefish, Montana. Despite obstacles and pitfalls, I came away with faith restored. There’s a lot that’s wrong right now — but there some things that are so damned right.

The Under the Big Sky Music & Arts Fest July 16-18 had a lineup that was practically custom-crafted for our Clan. Unfortunately, Cody Jinx and Corb Lund couldn’t be rebooked from the COVID-cancelled 2020 edition, but… well, check it out: 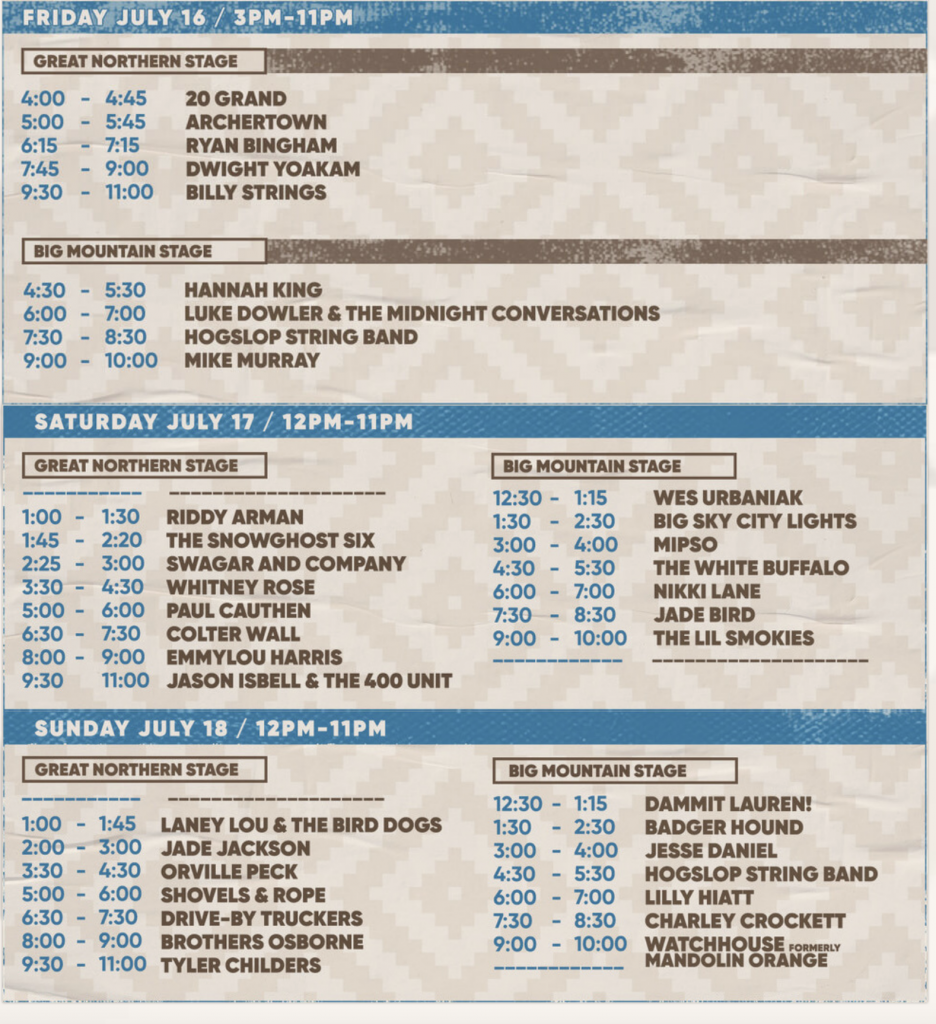 Ceili nailed it as soon as we entered the grounds of Big Mountain Ranch. It’s an immense village full of thousands of people ready to have a good time.

Because the music is what is called “Americana,” or “alt-country,” the festival drew a diverse cross-section of people: Montana cowboys; hipsters; hippie-cowgirls and cowgirl-hippies; freaks of indeterminate tribe — the kind of audience Willie Nelson & Co. built at the Dripping Springs Reunion and the Armadillo World Headquarters. Frontier Partisan readers know how much I love that Cosmic Cowboy — Ridin’ the Range and Actin’ Strange stuff. And let me tell you, seeing 15,000+ people — many of them in their 20s — going wild for Colter Wall playing solo on his ’hog Martin, singing cowboy songs, is a life-affirming moment for this old Frontier Partisan. 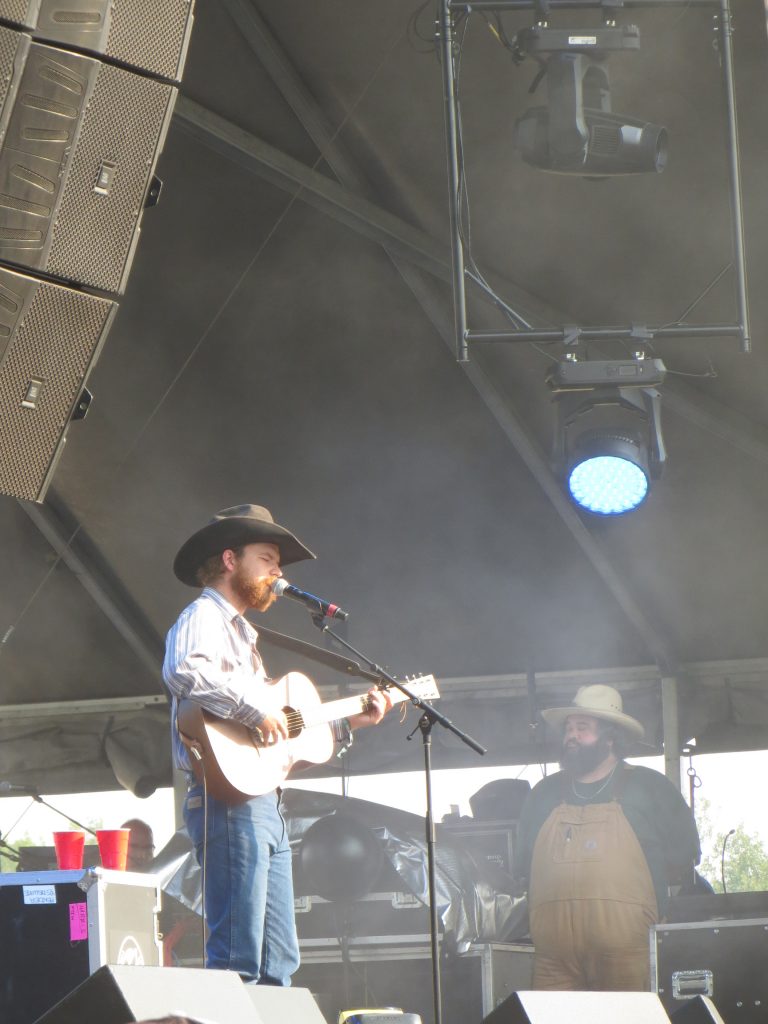 Colter Wall with three chords and the truth.

As is seeing young folk and old folk alike dancing and singing along to a strong set from a 74-year-old Emmylou Harris. Ceili and I pushed up front for that one — something I’ve been doing at Emmylou Harris shows since I was 16 years old. (Marilyn held down the blanket and lawn chairs; she only pushed up front for Ryan Bingham, the sad-eyed cowboy singer whose career got a turbo boost from a role on Yellowstone — aka My Cowboy Soap Opera). 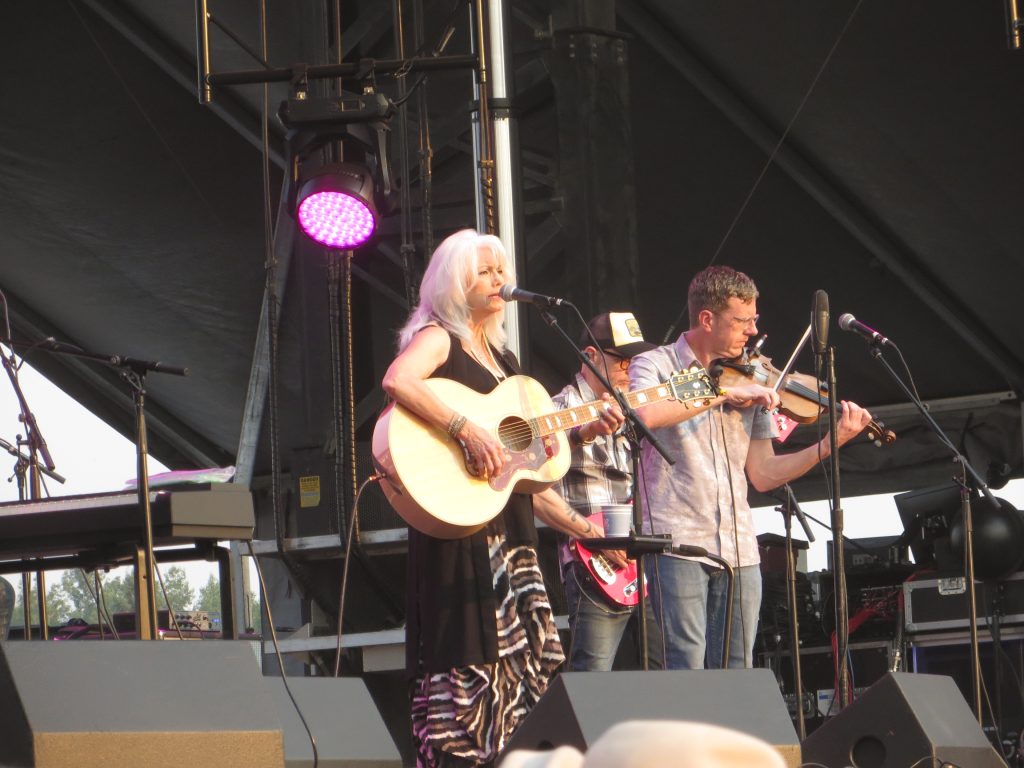 Emmylou Harris is still the jewel in the crown of country music. 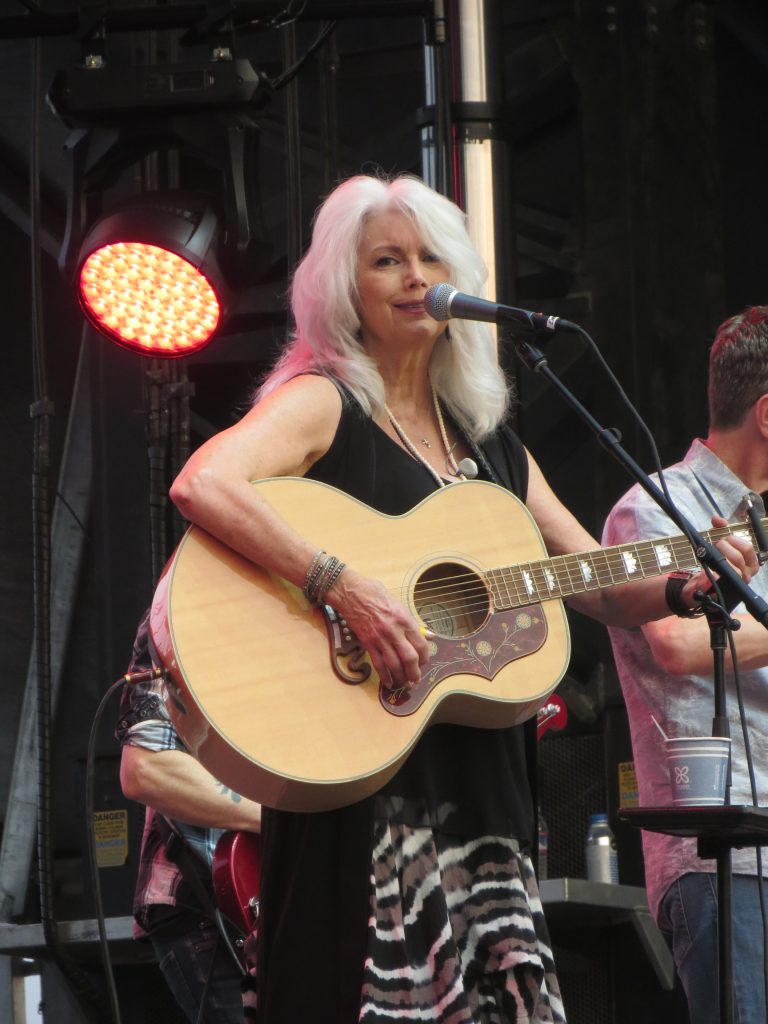 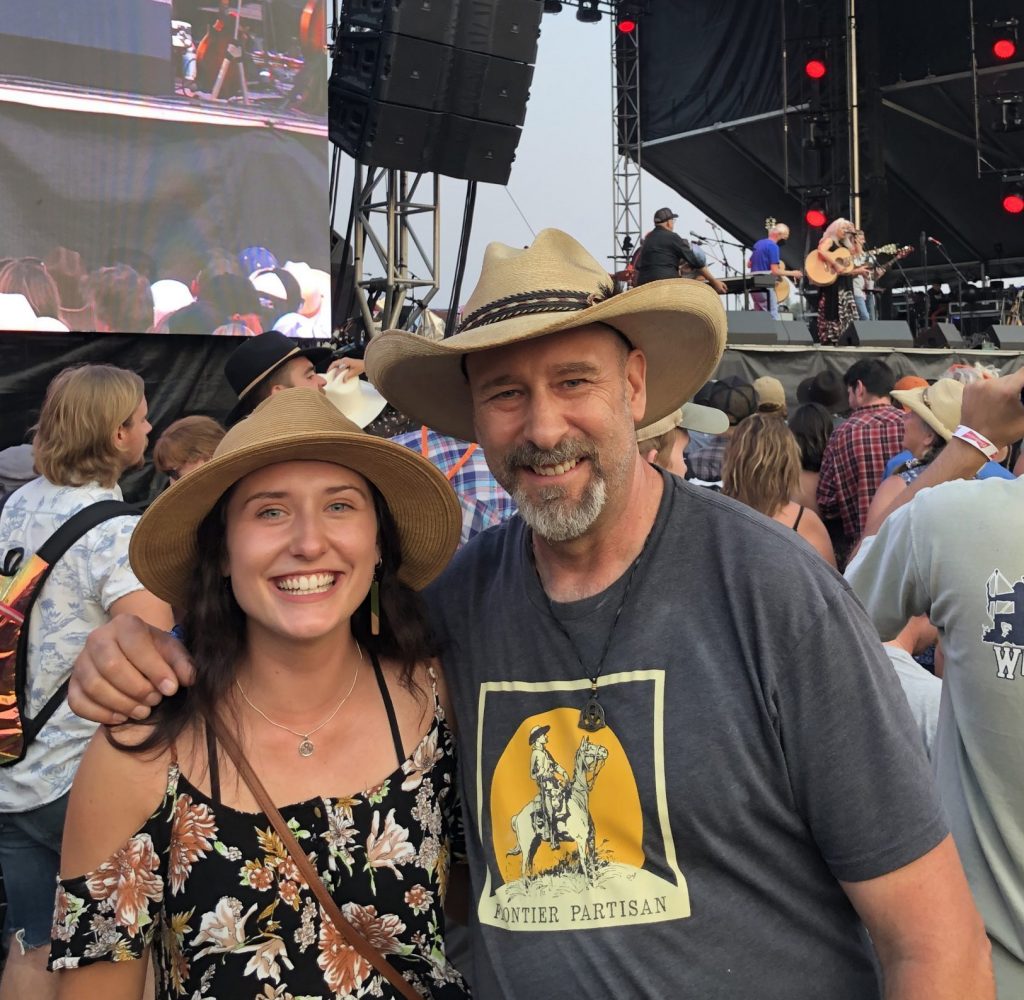 It was hotter than hell’s hinges all weekend, and the smoke from wildfires across Montana and Idaho had an impact. Luckily, smoke was pretty light on Saturday, which was our longest day at the festival (more than 12 hours). The setting is magnificent, with the Bitterroot Mountains looming on the horizon and abundant grasslands at all quarters. The Big Mountain Stage is nestled along a small creek at the foot of a natural amphitheater, overlooking hayfields and a rodeo arena where they held roughstock events between music sets. Ain’t that cool? 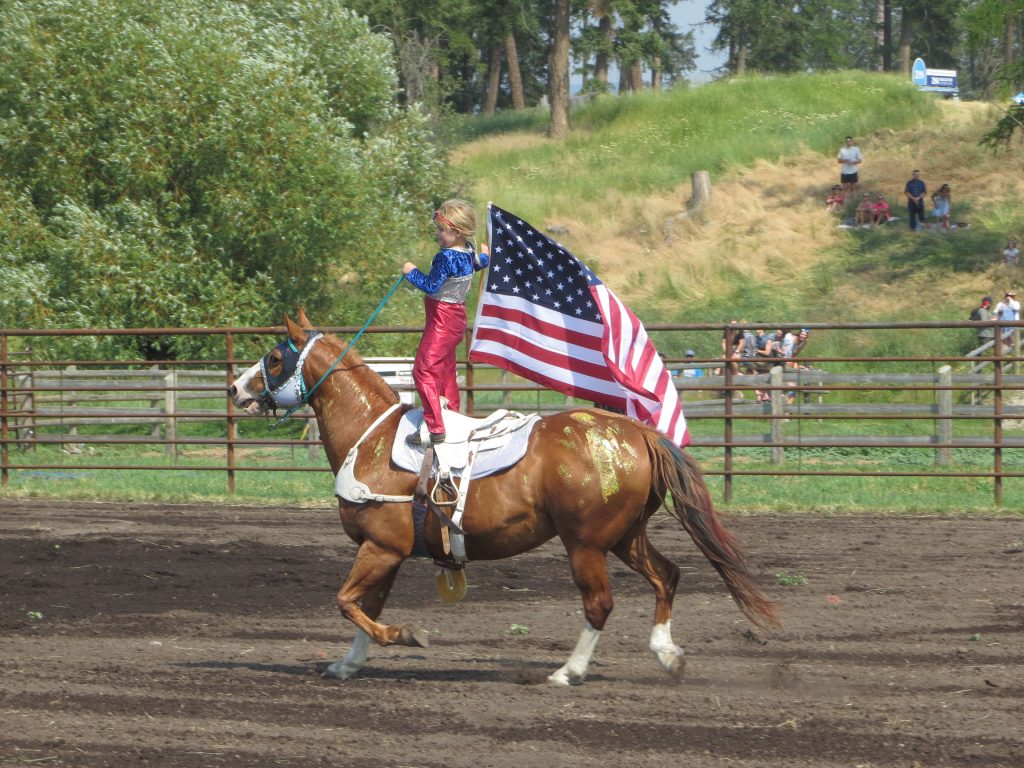 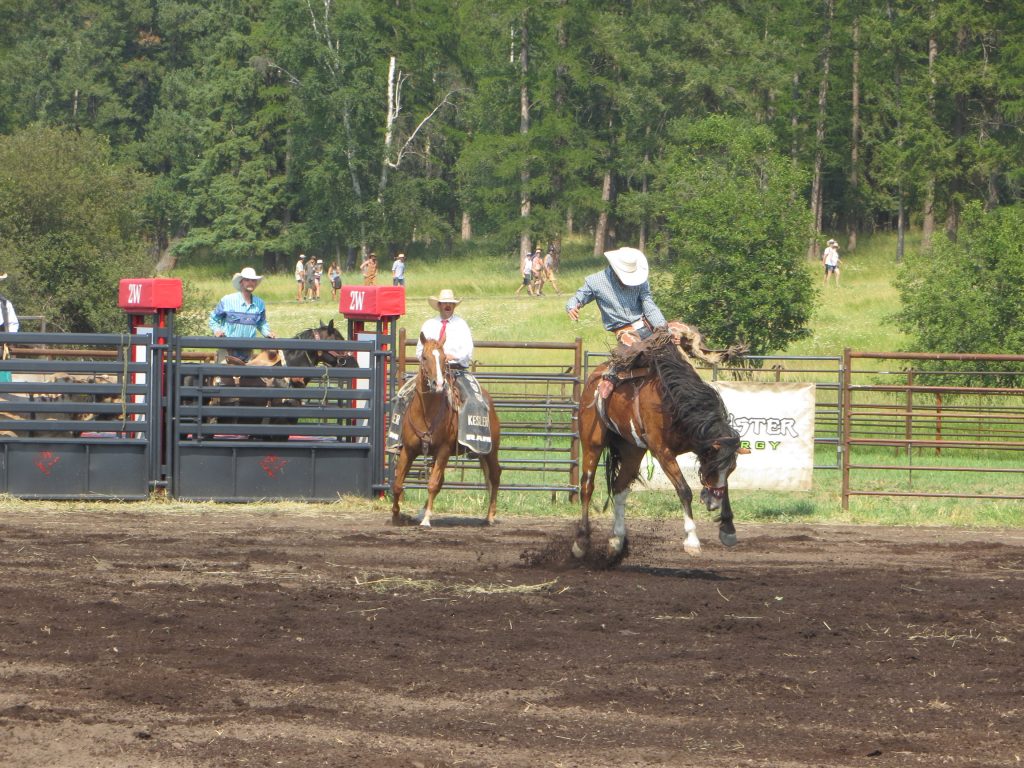 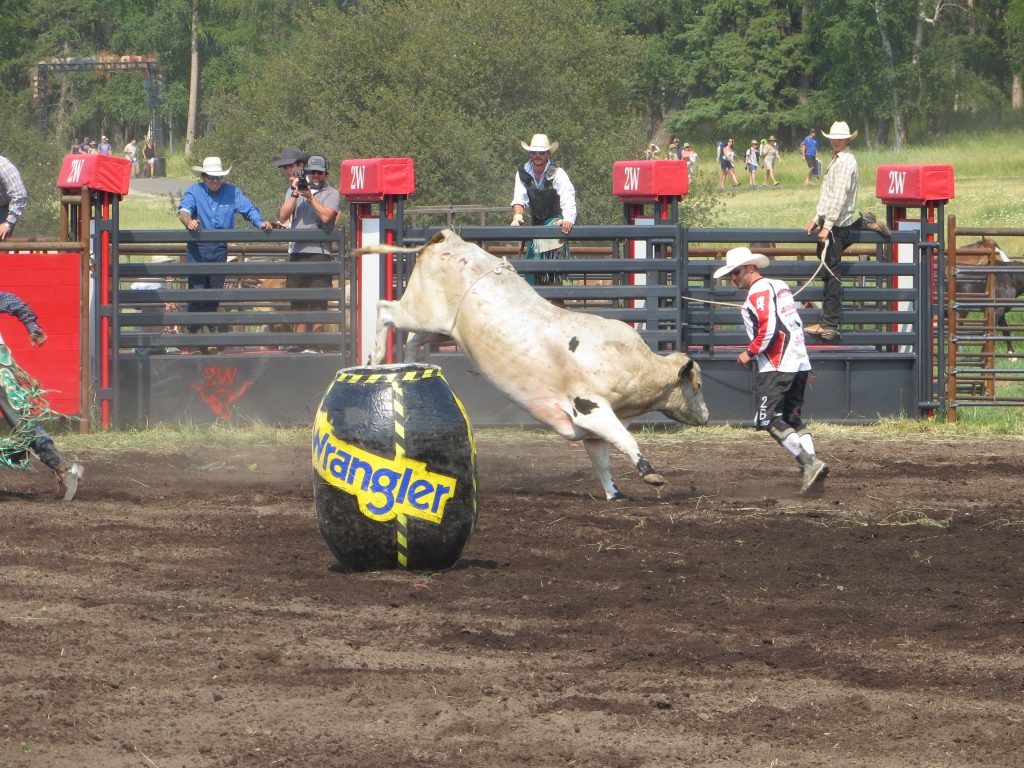 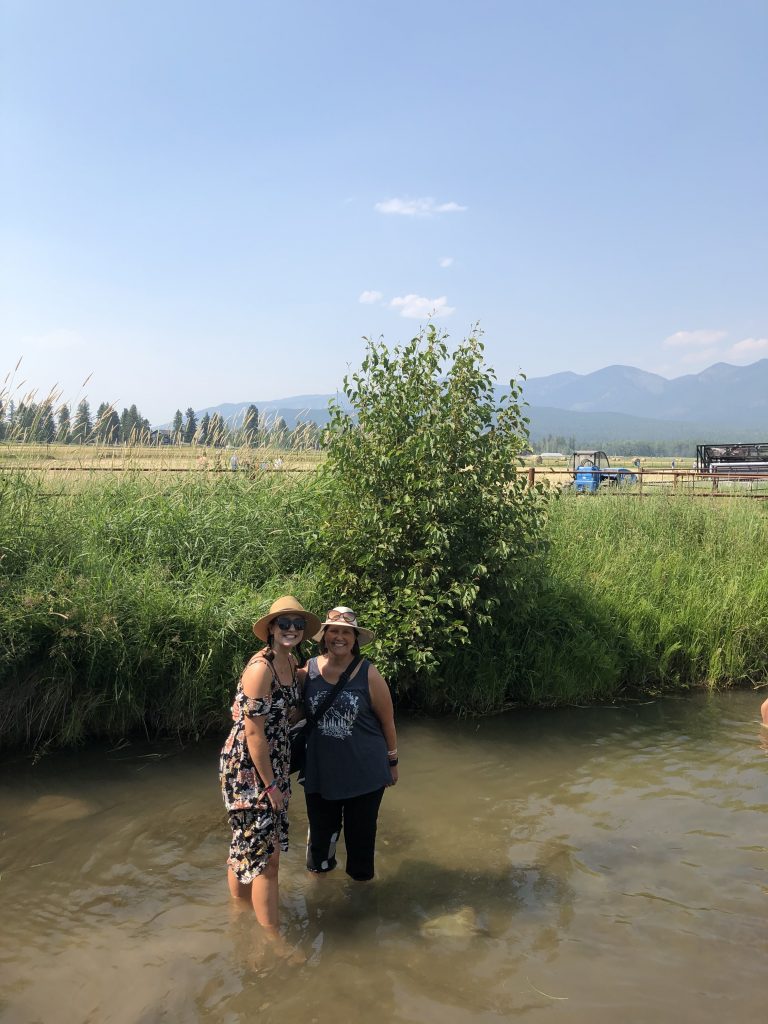 Coolin’ it in the creek. Don’t drink downstream from the herd…

There was a number of “maker” booths (and a flash tattoo outfit that did land office business). Some really quality goods available, and I wouldn’t have minded seeing more of that. But the focus really is on the music.

There is a whole generation coming up that truly loves this music, and honors a legacy that means the world to me. I saw literally dozens of Waylon Jennings shirts, many of them on people who were little kids — or not even born — when he died in 2002. This pleases me in ways I can’t adequately express. 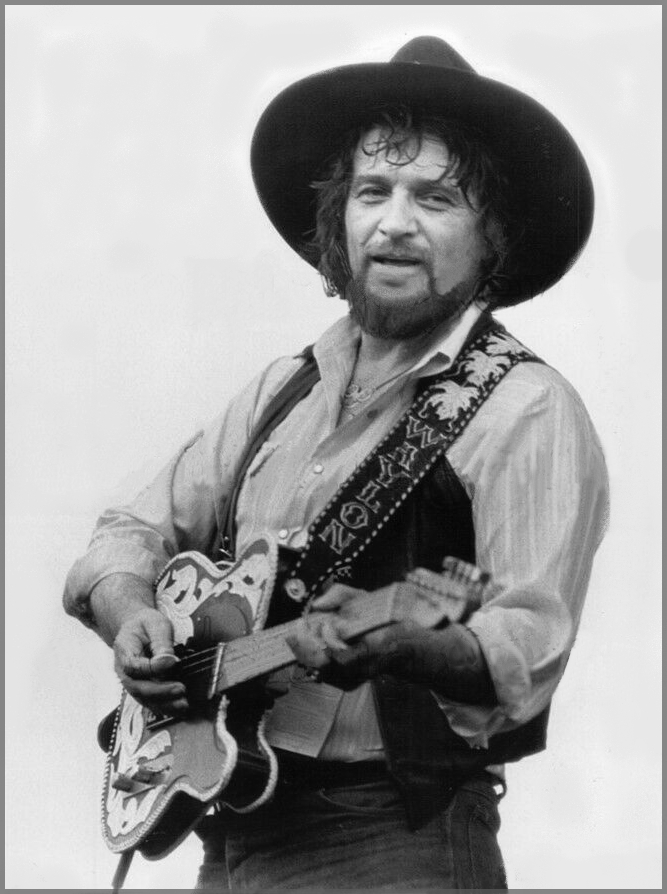 The spirit of Waylon Jennings was strong at the festival…

There was another feller in a black hat hanging around. Colter Wall was out and about taking in the whole scene, eating barbecue and enjoying the rodeo action. Ceili got a chance to talk with him a bit. A young cowboy gentleman — one we’ll be seeing again in Bend this October. 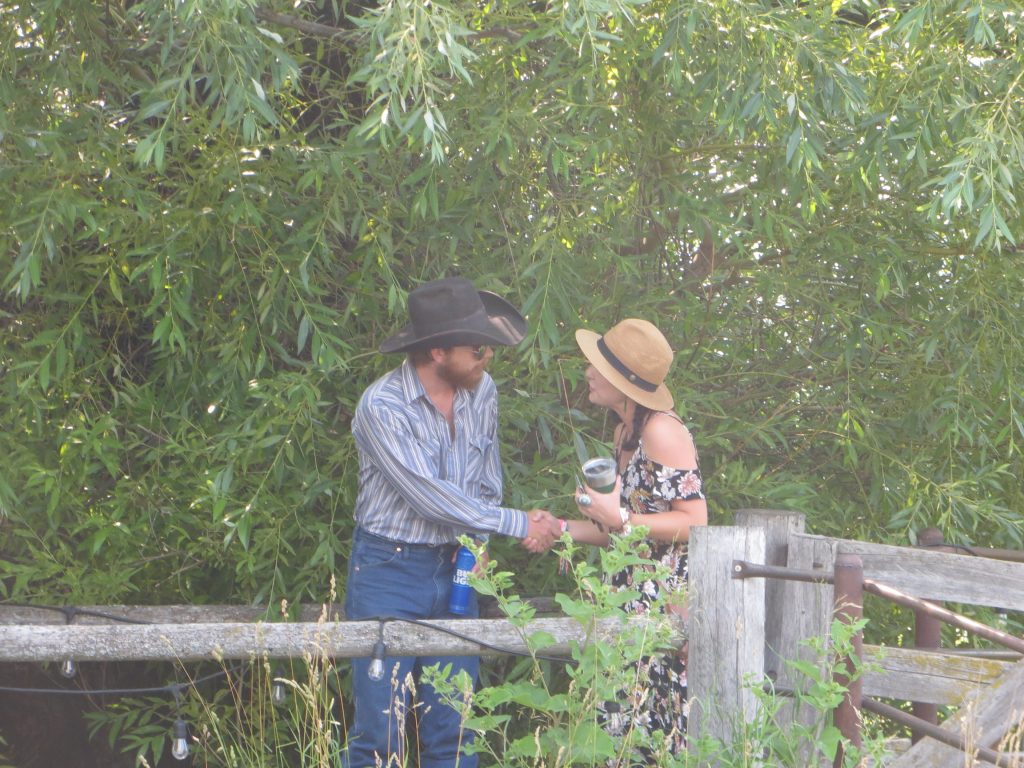 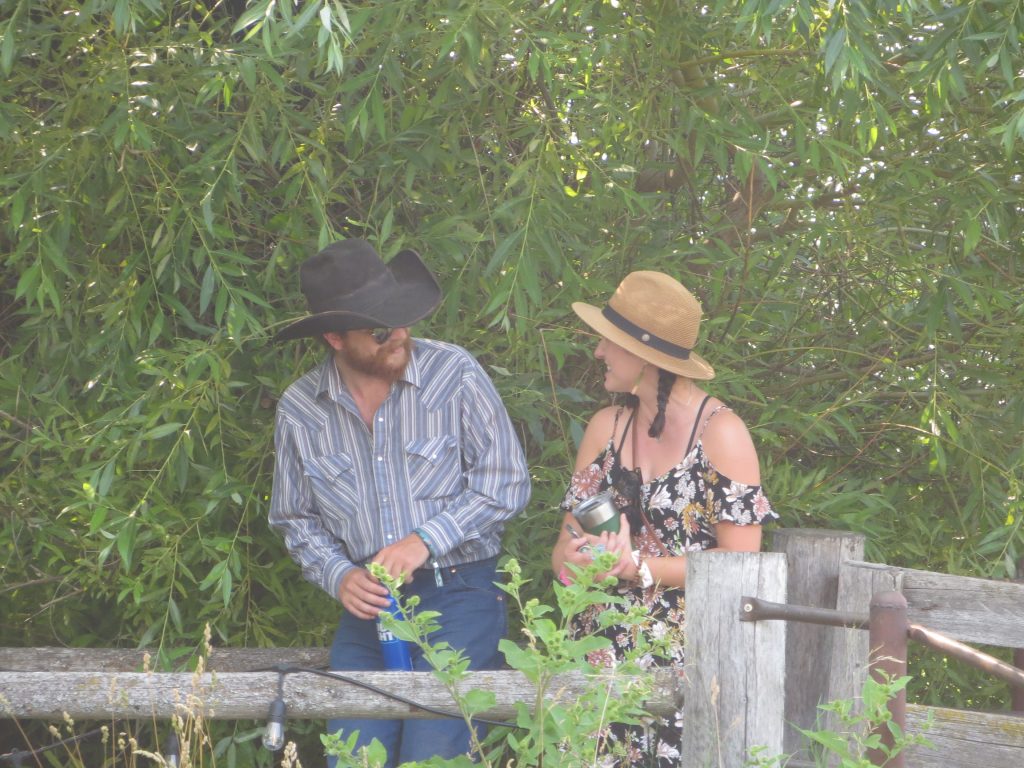 See ya in Bend this fall…

Pretty sure that this was the biggest audience Colter Wall has ever played for — and I think that’s true for many of the artists. This thing was HUGE. The Great Northern Stage sat on a vast open field that filled up with thousands upon thousands of people for the headline sets. 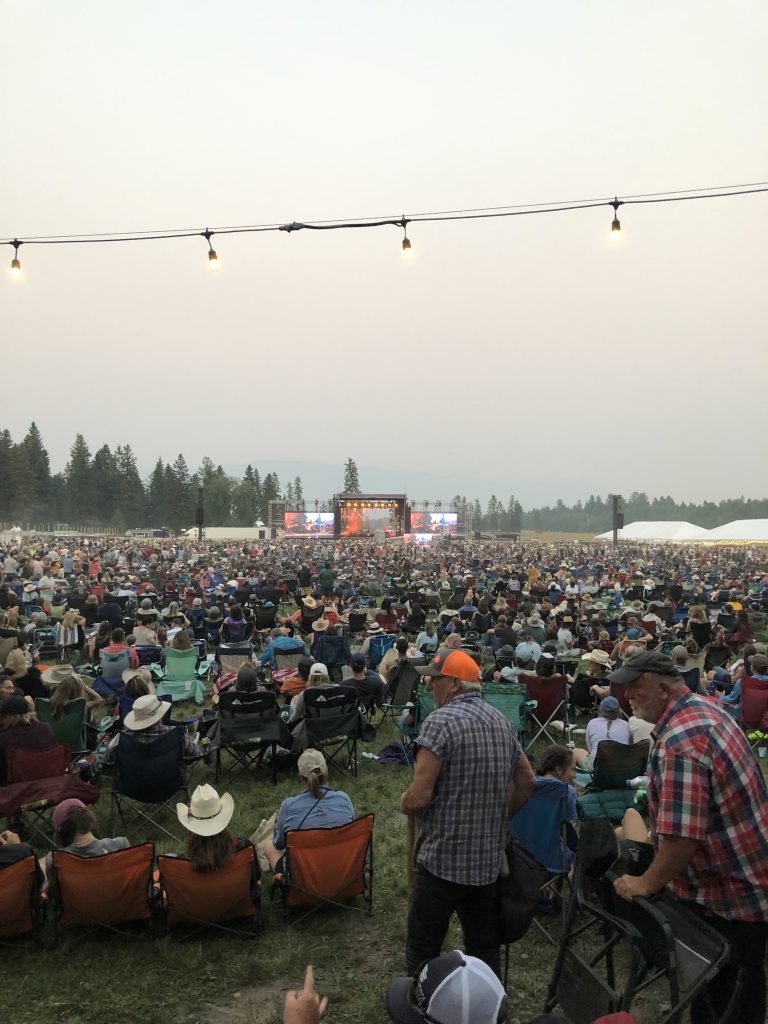 Estimated crowd was 30,000 — and the event was oversold. They had rollovers from the cancelled 2020 festival, and they clearly underestimated how many of those rollovers would actually show up. That strained the infrastructure more than a little, and they’ve got some things to unass for next time. Like running out of booze before headliner Tyler Childers took the stage. Ooops.

Speaking of Tyler Childers: I was a pretty early adopter on his music, but had not seen him live. We had tickets for a 2020 show in Bend, but you know what happened to that. This was his first show in 16 months. And what a show it was. I kinda knew this already, but seeing it in person affirmed it: Tyler Childers is a once-a-generation artist, one who is working a deep, rich vein of tradition, while pushing its boundaries. 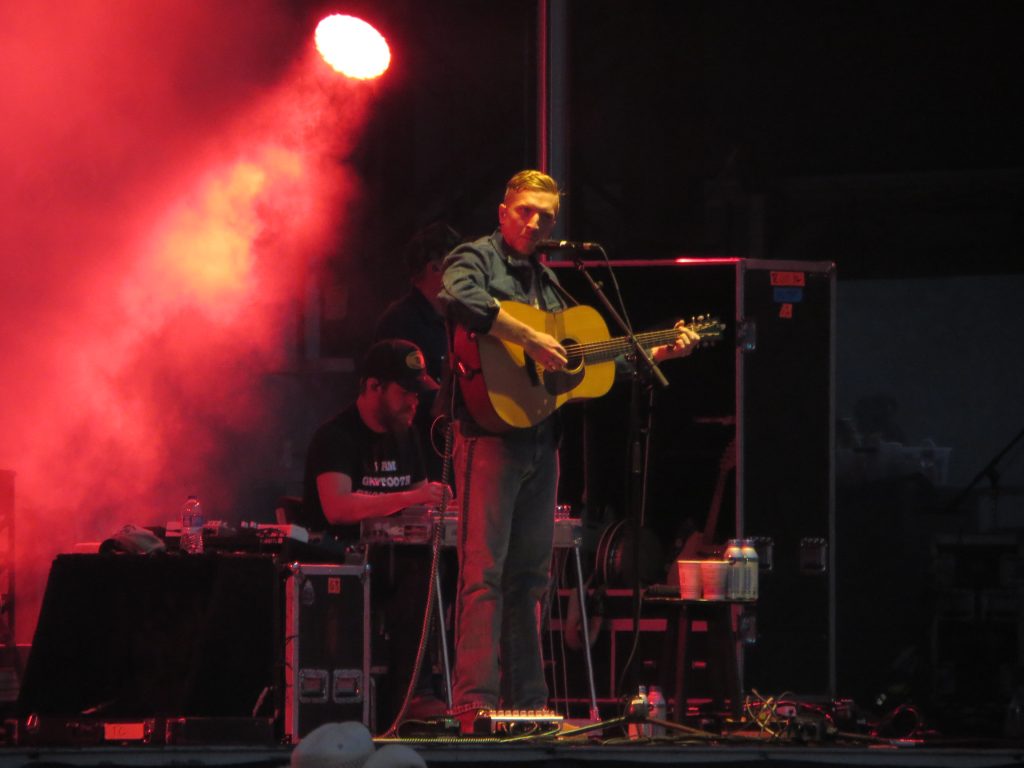 The same can be said for the jaw-droppingly talented Billy Strings. He was Marilyn’s dark horse performer, the one who surprised and astonished her. As she put it, watching a young crowd absolutely freaking out for bluegrass/jazz/rock and Ol’ Slewfoot:

“There’s the future of the music, right there.”

Sure enuf. And I won’t argue if you put Jason Isbell in that category, too. So, that makes two or three transcendent once-a-generation artists (plus once-a-generation artists from MY vintage) and a whole bunch of top hands, all on one weekend — raising hell with the hippies and the cowboys, honoring their heritage and pioneering new territory. And that’s the kind of experience that means we’ll be unfurling that banner again:

Under the Big Sky or Bust!

Note: Ceili is putting together a Youtube video on the fest. I’ll post a link when that’s available.