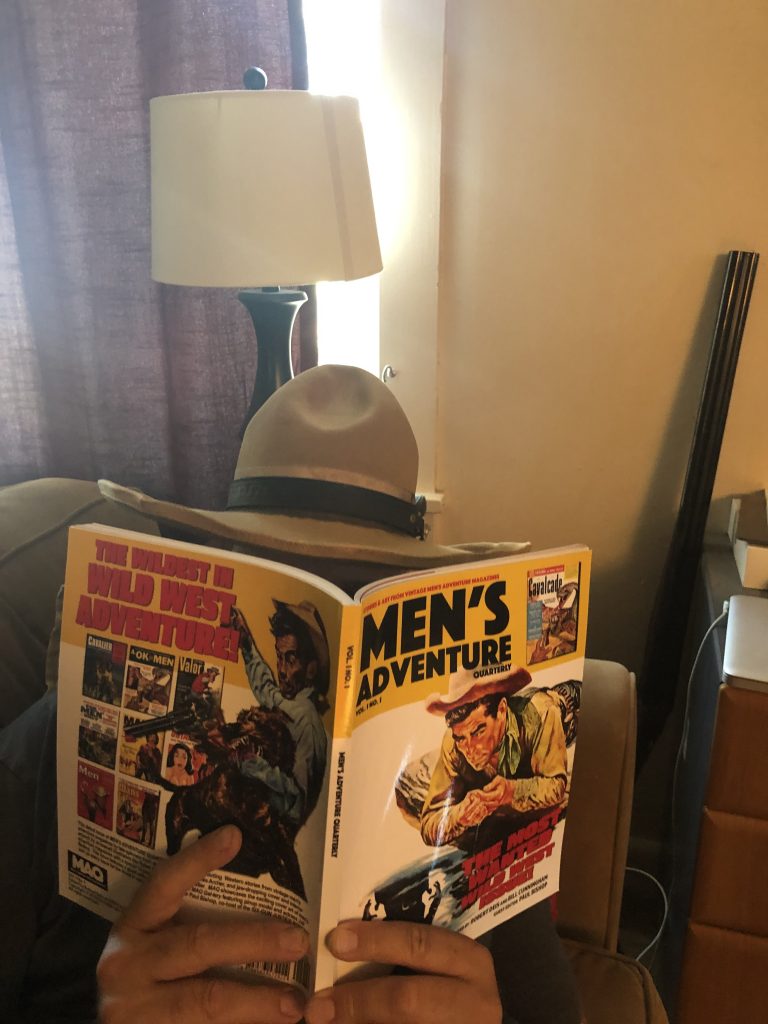 The Frontier Partisans mythos is built on history, folklore and pulp. Separating the one from the other in frontier history is an almost impossible task, since the frontier was being mythologized and exploited for entertainment value even as its history played out. Some of the greatest fun to be had in this field is found in picking up all three trails and exploring how they intersect.

I recently received a fine contribution to such endeavors in the form of Vol. 1; No. 1 of Men’s Adventure Quarterly. Frontier Partisan patron and ace curator of 20th Century pulp Bob Deis is the trailboss on this project, along with Bill Cunningham, and guest editor Paul Bishop. The book — very nicely produced — collects stories and art from vintage men’s adventure magazines of the 1950s and ’60s, the successors to the original pulps of the 1920s and ’30s.

Editorial essays provide context for the stories — some fiction, some non-fiction, some fiction masquerading as fact and some yarns that seem to lurid to be true, yet… They also provide biographical information for writers who honed their chops in the magazines, then pioneered the paperback Western explosion that echoed through the 1970s and into the early 1980s. Lou Cameron has always fascinated me. He was a World War II veteran and he knew his frontier history (and weaponry). He became a pioneer of the “adult Western,” featuring graphic sex and violence — an evolution of the men’s adventure model, but an overturning of norms in a generally chaste and morally unambiguous genre. The format anticipated the moral ambiguity and sexual frankness that dominates cable TV drama today.

The men’s adventure magazines featured the work of some ace commercial artists, and it’s endlessly fun to look at. The depictions of the era are not what you’d call authentic; low-slung holsters and 1950s style hats and boots abound. But that is part of the charm.

You can read these stories for the lurid, amped-up adventure yarns they were meant to be and/or as a sociological glimpse of what drove the mid-20th Century American male. Either way, it’s a fine way to while away an evening.

Deis and Cunningham have more coming our way. The next edition is the All-Espionage Issue. I’m in. 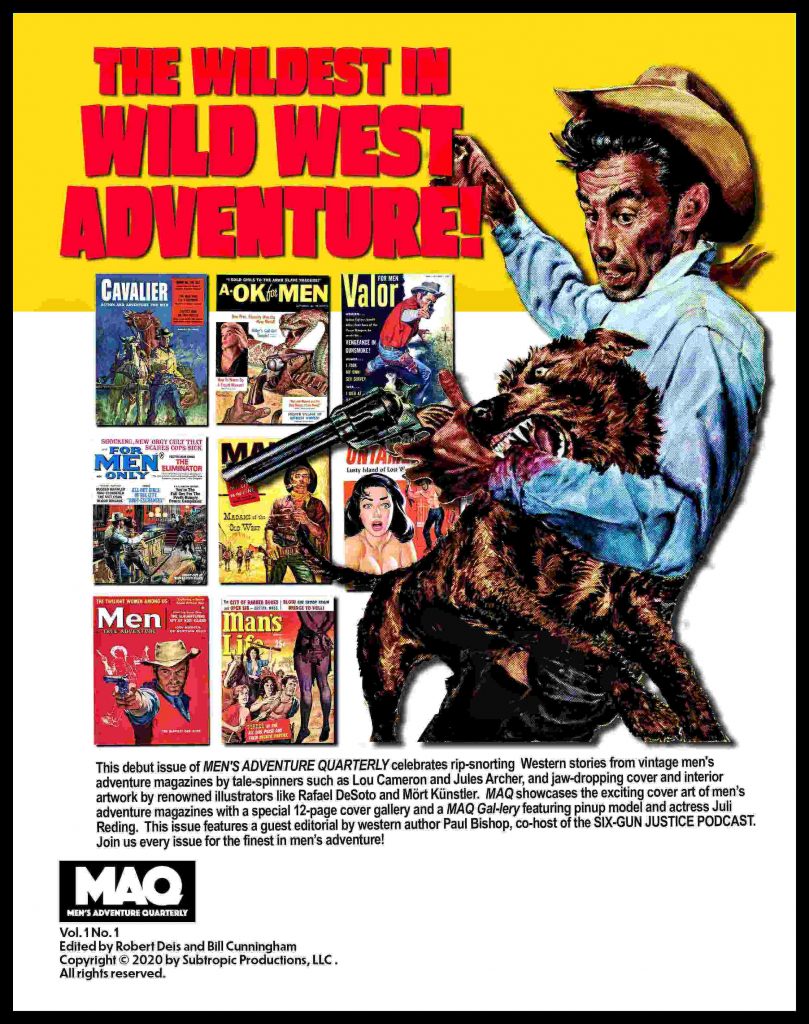 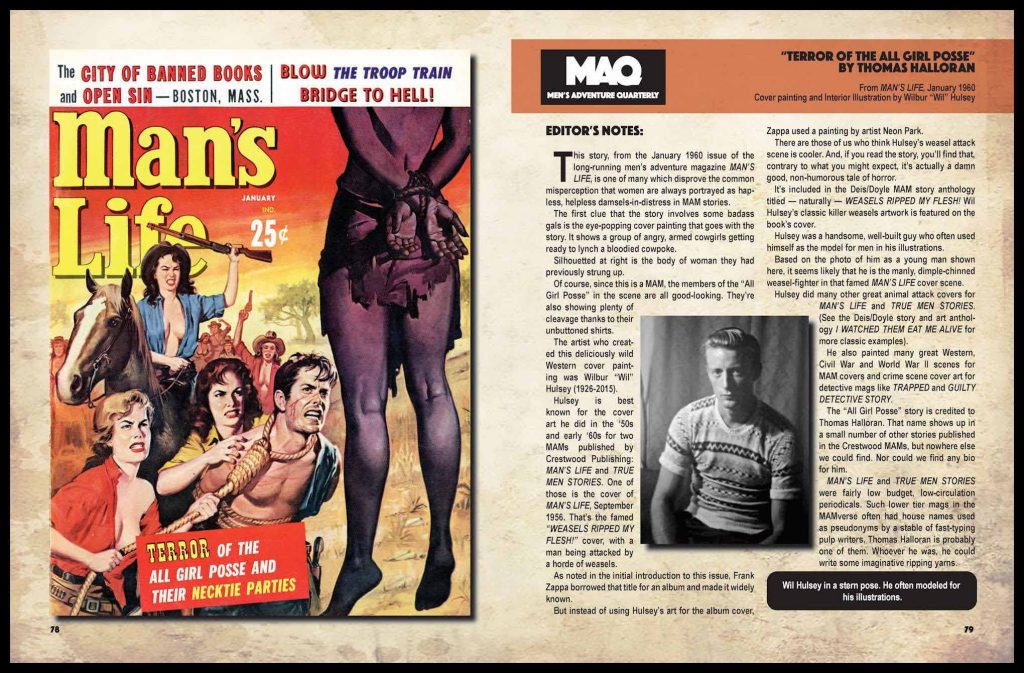 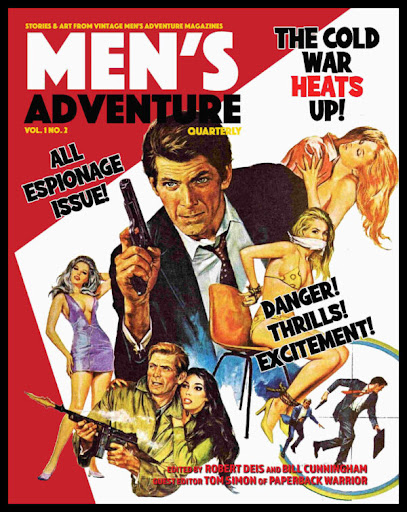 While we’re on this particular stretch of trail, head on over to our friend Keith West’s Adventures Fantastic blog. He’s featured a new guest post by Will Oliver comparing the works of Robert E. Howard and Louis L’Amour. I’ve always believed — without taking the time to chase down down any evidence — that L’amour read and was heavily influenced by REH. Oliver builds a strong circumstantial case that this is, in fact, true, offering comparisons of prose and poetry and biographical sketches that demonstrate that they were, at the very least, kindred spirits. It’s a worthy read.