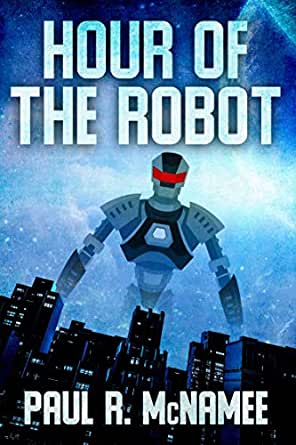 Our own Frontier Partisans contributor Paul McNamee has committed authorship again. Much anthologized, Paul’s work has now turned to a standalone novel. The Captain of the New England Ranging Company has tapped his love for pulpy goodness to produce Hour of the Robot. Here’s the caper:

From their nerve center penthouse lair, the Robot supports the extraterrestrial superhero of the shining city of Pallas, the Alien. When a train disaster reveals an arms-smuggling operation, the Alien decides it is time for the Robot to join him in the field.

On the other end of the pipeline, in the city of Crowsport, resident vigilante crimefighters, the Protector and his sidekick, the Understudy, are closing in on a local gang boss.
Following the leads of their separate investigations, the Alien and the Protector—with the Robot and the Understudy in tow—serendipitously meet. But when their joint operation is broken, the Robot must step out into the world and work with the crimefighters to bring the suspects to justice.

But are there more dangerous forces at work than they realize?

Paul and I met while standing shoulder-to-shoulder (virtually) in the shieldwall of The Cimmerian, a blog dedicated to the milieu of the great Texan pulpster Robert E. Howard. He’s a fine feller. A guitar-slinging blues guy. A writer. A shieldwall comrade.
I ordered up his book from Paulina Springs Books today.
Previous Post: « Me and Jim Bridger — New Frontier Partisans Podcast is Live
Next Post: Venturing Into The North Water »