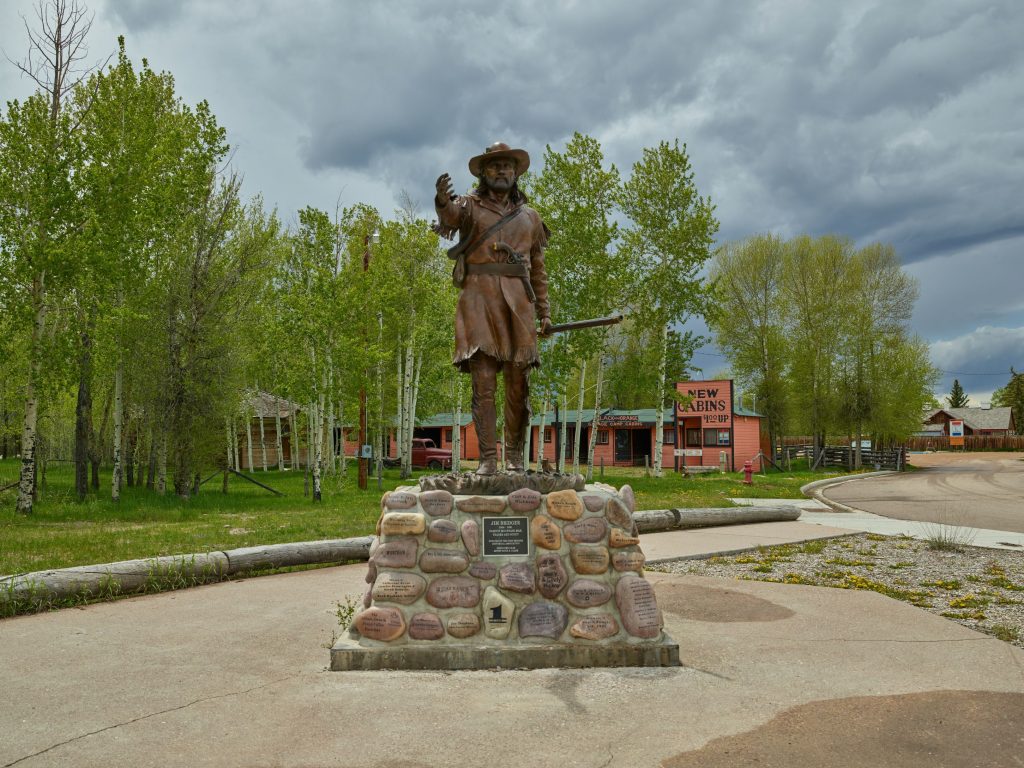 The most recent series of The Frontier Partisans Podcast explores the life of Jim Bridger. Find the podcast on Podbean at https://frontierpartisans.podbean.com/ or on Spotify.

A couple of years ago, the ownership of The Nugget Newspaper hosted a gathering of the chiefs of their roster of community newspapers, hailing from Washington and Oregon to Michigan. We rendezvoused in their home base of Buffalo, Wyoming, which lies at the foot of the eastern slope of the Bighorn Mountains. It’s historic country. The Bozeman Trail, which branched off of the Oregon Trail in the 1860s to reach the goldfields in Montana, runs through the country. In 1892, local cattle barons brought in a mercenary contingent of Texas gunmen to run out small operators in the area whom they accused of rustling cattle. This nasty piece of business would go down in history as the Johnson County War.

I got to Buffalo early enough to take a 15-minute drive out to the site of Fort Phil Kearney and the Fetterman Fight, where, on December 21, 1866, a massive force of Lakota Sioux, Cheyenne and Arapaho ambushed and rubbed out 79 U.S. Army soldiers and two civilians who had made the fatal mistake of chasing a group of decoys across Lodge Trail Ridge. This trip led to a multi-part series on the Bozeman Trail War, which I consider to be my best work thus far on Frontier Partisans.

One of things that struck me most profoundly as I explored the site of Fort Phil Kearney was that I was walking in the footsteps of Jim Bridger.

Bridger was a one of the original mountain men, who became the premier scout and guide on the northern plains. I’ve been cutting his sign since I was a kid. Bridger features prominently in two historical novels by Michael Punke — The Revenant, (which was turned into a movie starring Leonardo DiCaprio) and the recently-released Ridgeline, which vividly tells the tale of the Fetterman Fight. Lane Jacobson of Paulina Springs Books in Sisters recruited me to be Punke’s “conversation partner” in a Books in Common NW event. That talk can be viewed via the Books in Common NW YouTube channel.

The Revenant depicts an episode from Bridger’s youth, when he was caught up in Hugh Glass’ epic struggle for survival after being mauled by a sow grizzly bear on the Grand River in now-South Dakota in 1823. “Ridgeline” depicts Bridger’s role as a scout for the U.S. Army in 1866, when they moved into the Powder River Country to construct forts to guard the Bozeman Trail route. Bridger warned the Army command that the Powder River Country tribes were gathering in great force to drive them out, but they did not heed his warnings…

During his near-half-century career in the American West, Bridger saw — and facilitated — massive change. In 1822, when he first hired on to trap beaver for General William Ashley in an expedition up the Missouri River, the land was a vast wilderness, teeming with wildlife and dominated by the political, diplomatic and military power of vigorous native peoples — the Blackfeet, the Shoshone, the Flathead, the Nez Perce, the Lakota, Cheyenne, Arapaho.

Bridger, completely illiterate, had an exceptional sense of geography and terrain, and his fur trapping expeditions made the lay of the land known to the growing republic. When the fur trade died out — due to changing fashions and over-trapping of the resource — Bridger built a trading post in southwestern Wyoming he named Fort Bridger. It became an important waystation for the growing flood of emigrants passing through the plains and Rocky Mountains on their way to Oregon and California.

By the time Bridger took up work as a scout for the army, the West was filling up with mining communities, and the Indian peoples with whom he’d lived, intermarried, or fought, depending on circumstances, were in decline, ravaged by diseases like smallpox, alcoholism fomented by the whiskey trade, and under increasing pressure due to climate change and the loss of their range.

“The free life in the mountains” that Bridger loved was disappearing — and he’d had a major hand in its demise. In making his living and his life, he had informally mapped the West and discovered routes that would one day be used by railroads and interstates, guided and provided advice and succor to emigrants who would fill it up, facilitated the work of the military force that would subdue and tame it.

He was the living embodiment of what I call The Frontiersman’s Paradox: We come to a wild, free, beautiful place, seeking an untrammeled life and a bit of economic prosperity — and our every action changes what we love.

Punke has Bridger reflecting on all of this in Ridgeline, in a campfire conversation with Jim Beckwourth, who was born a slave and came West to become a Mountain Man and then a war chief of the Crow Nation:

“Do you ever think about whether we’re doing right or wrong?” asked Bridger.

“What do you mean? replied Beckwourth.

“I don’t know exactly,” said Bridger. “But I’ve been thinking some lately, wondering about things.”

“Things such as what?”

“Well, I’ll tell you one… When I was eighteen years old, I rode on to the Great Salt Lake — first white man to ever see it, so far as I know.”

“Pretty for sure, and wild — but that’s part of my point. Have you been there lately?”

“Well, it’s practically as big as St. Louis. Half the buildings are brick, and the Mormons are even putting up a temple.”

“You sound like you’re complaining,” said Beckwourth. “Didn’t’ all those Mormons stop off at your fort to buy flour and repair their wagons? I heard you made a killing.”

“I did okay. And I’m not complaining, exactly — just wondering.”

“Wondering what?” Well, I don’t know… wondering if it’s a good thing or a bad thing, I guess.”

I think about Bridger as we are washed in the tides of change in Sisters Country, as more and more people discover this place. I think about Bridger when The Nugget publishes a story sharing a favorite hike, or when we have to pull a permit to experience a vestige of “the wild free life in the mountains.” We simultaneously want to share our bounty and keep it for ourselves. And the more of us who seek it, the less there is to share.