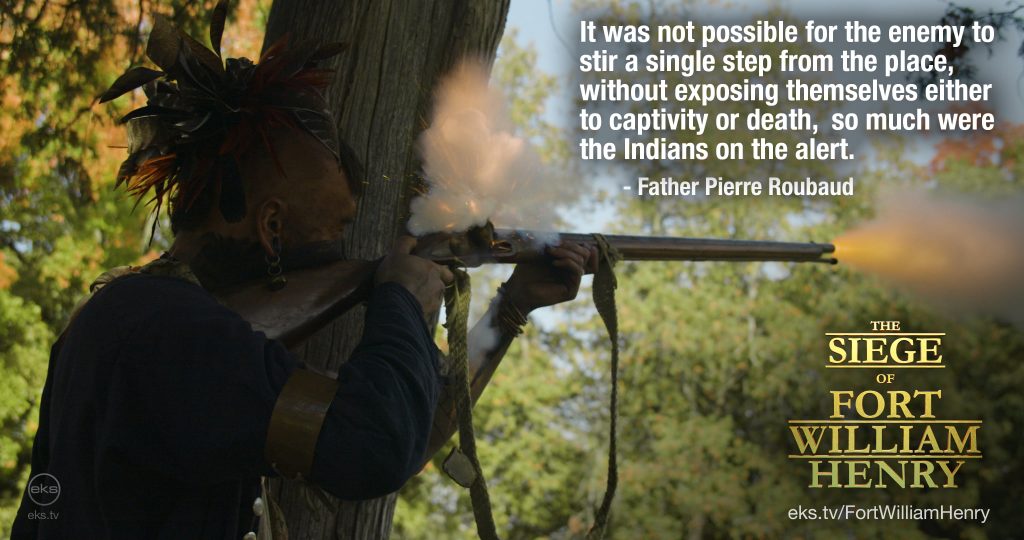 Captain Rick Schwertfeger has been a busy scout these past few days, running from Lake George down to Florida. Good thing he’s an endurance athlete…

He kicked up a documentary in the works on one of the great set-pieces of Frontier Partisan history — the Siege of Fort William Henry. Yes, THAT siege, the one in The Last of the Mohicans. From EKS Films:

The film is reportedly in the final stages of sound mixing and will soon enough be out in the wild.

Captain Schwertfeger scouted up an nice little piece in his favorite magazine, Garden & Gun, by the estimable Taylor Brown.

“So, I know we already know this,” says Rick, “but this son-of-a-gun can really write!”

Yes, he can. His novel The River of Kings is one of the best novels I’ve read in the past decade. His most recent novel, Pride of Eden, is also excellent, and won Brown the Georgia Author of the Year Award for Literary Fiction. Nowadays that “literary fiction” tag can put a feller off — but fear not: Brown is a storyteller. Anyhoo… his G&G piece reflects on palavering with the ghosts of Old Florida. 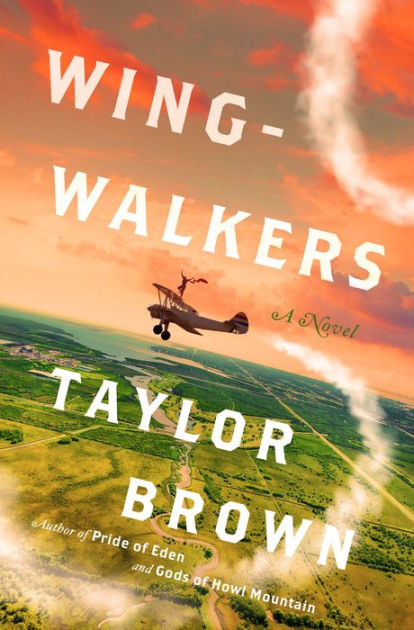 I’m thrilled to reveal the cover for my new novel, Wingwalkers, coming April 19, 2022 from St. Martin’s Press! The book opens with a passage from Joseph Blotner’s Faulkner: A Biography, in which William Faulkner has been attending the opening festivities of the New Orleans Shushan Airport during Mardi Gras, 1934:

When [Faulkner] appeared at the Bradfords’ early Sunday morning, he looked ravenous and hung over. After he consumed a large breakfast, he launched into what seemed to Mary Rose a disjointed, nightmarish tale of accepting a ride from two motorcyclists, a man and a woman. They were aviators at the meet, and he had joined them in drinking, flying, and carousing.

Who were these aviator-motorcyclists, and how did their lives intersect with Faulkner’s? That question, which burned in my imagination, brought this whole novel to life.

In Wingwalkers, a female wingwalker and her husband, a former World War I ace, barnstorm across Depression-era America, performing acts of aerial daring, while a young William Faulkner attempts to take creative flight.

We’ve communicated a little online and Brown seems like a really solid guy. When he was doing what limited promotion he could do for Pride of Eden, which came out in the depths of the pandemic, he frequently wore a hat with the purported flag of Edward Thatch — Blackbeard — on it. 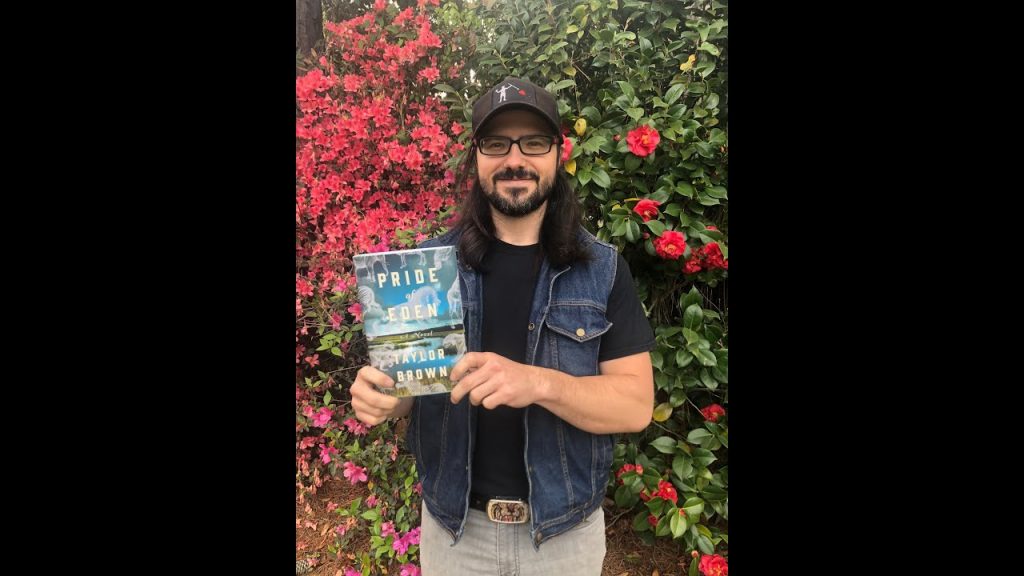 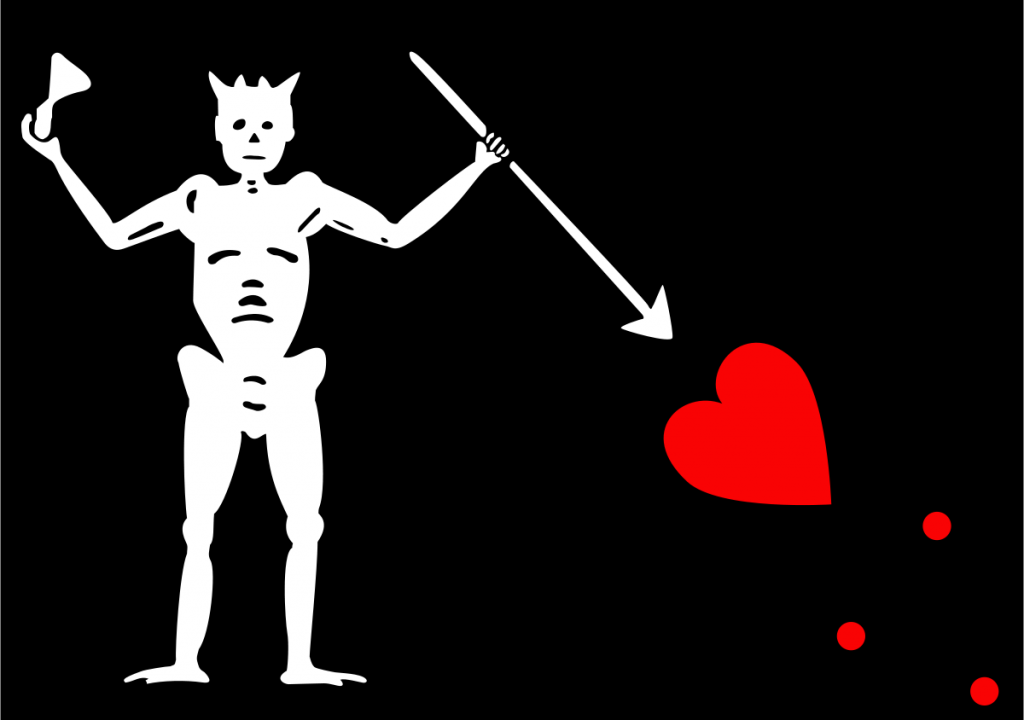 I made note of the hat and he told me he’s played with the idea of a novel about Blackbeard (it’s a southern coastal story, after all). I have been, I think remarkably restrained, seeing as I have not pestered him about this. But I whisper a prayer to whatever piratical gods push the quills of mighty writers… Please, let this happen…. 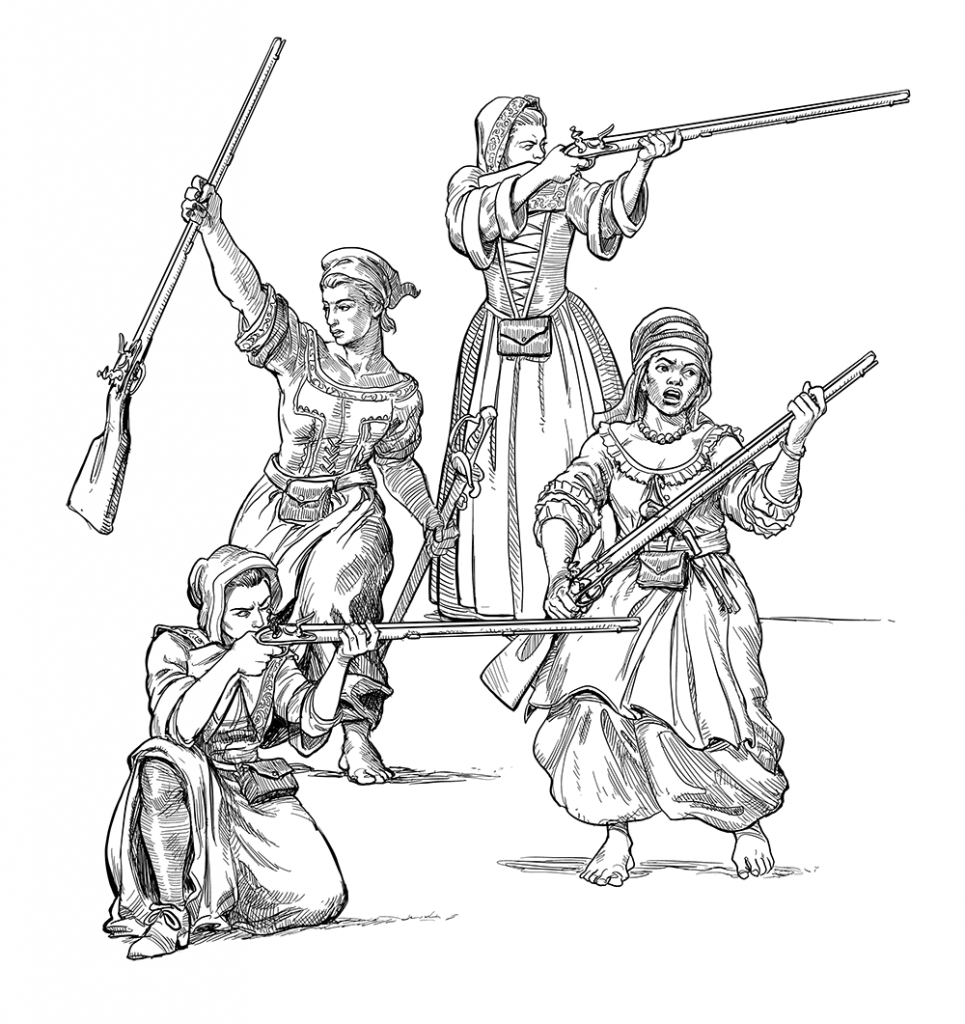 Speaking of pirates, ran across this striking image promoting a new set of miniatures from Firelock Games, who created Blood & Plunder:

Blood & Plunder is a 28 mm historical miniatures war game set in the 17th century during the golden age of piracy. The game is played out on a tabletop using custom terrain and 28 mm miniature figures and ships.

This highly immersive and tactical game system takes players into the 17th-century world of bloodthirsty pirates, desperate militiamen, and ferocious natives. All of them in a constant struggle to control the wealth of the New World! Games can be played on land, at sea or a combination of both using a streamlined set of gaming rules that will present new and veteran wargamers alike with unique tactical challenges. The game was created with the consultation of Benerson Little, a [renowned] pirate historian, and author in order to insure as much historical accuracy as possible.

The new units for the game are described thus:

Wives of the Boucaniers, these Caribbean frontier women are known to be as skilled with their Buccaneer Guns as their husbands are. They carry on the hunting trade when their husbands are away raiding the Spanish.

If one of those wives looks a bit like Eugene Delacroix’s Liberty Leading the People, well… 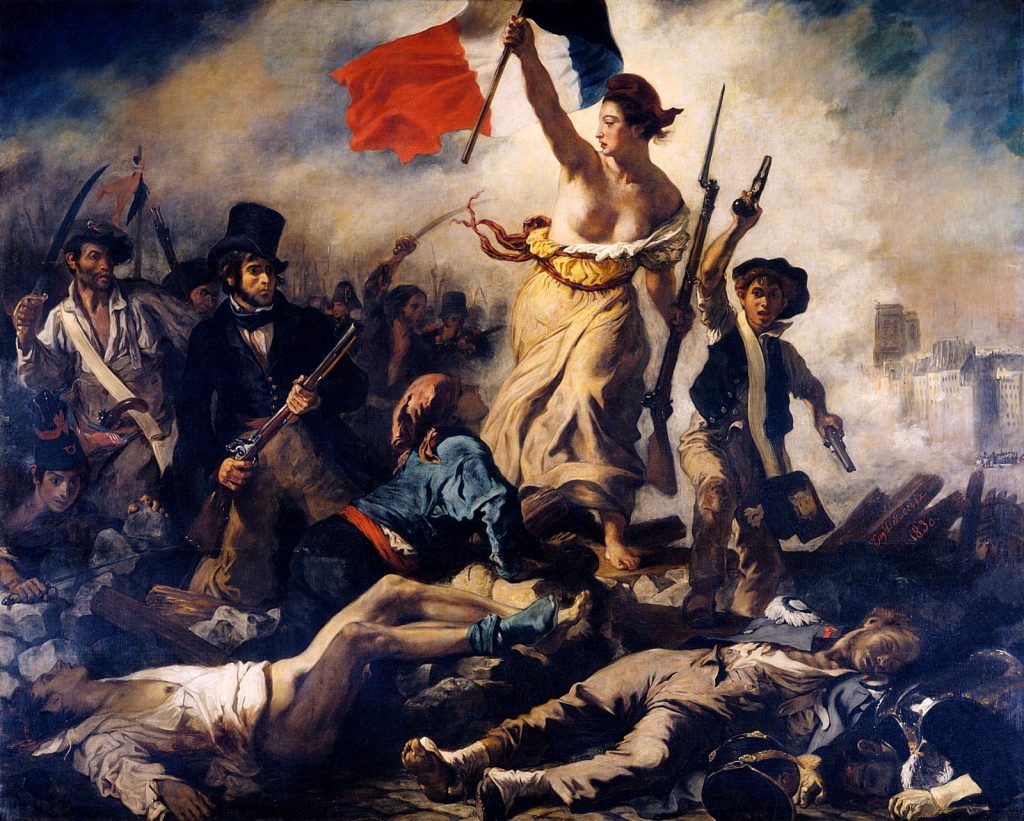 This may be mythologies coming full circle. Marcus Rediker, one of the premier scholars of the Atlantic maritime world of the colonial era posits that Liberty Leading the People might have been riffing off of an earlier Dutch illustration depicting the pirate Anne Bonny. 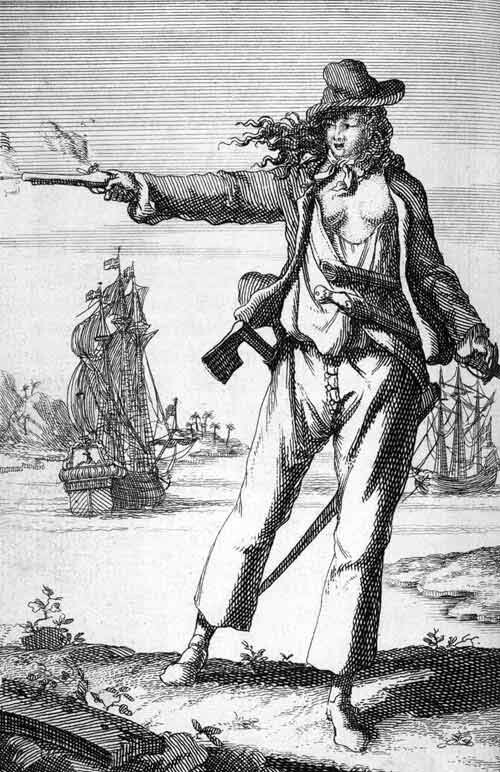 As Frontier Partisan readers know, I am a great admirer of the Shawnee people. In my childhood explorations of the Ohio Valley Frontier, I learned to see them simply as “the enemy,” the “savage foes” of my early frontier heroes. Age, maturity, and serious study of the era led me to recognize in the Shawnee story a magnificent, heroic resistance — and a great American tragedy. I featured the war captain Blue Jacket in Warriors of the Wildlands: True Tales of the Frontier Partisans. I followed Shawnee hunters out onto the plains and into the Mexican borderlands. I am gratified to see that these noble people are working to reclaim their ancient heritage, much abused by kooks.

The Shawnee tribe returned home to the Serpent Mound on the longest day of the year.

The Summer Solstice, June 20, the longest day of the year, marks the first time that the Shawnee tribe has officially returned to the Serpent Mound located in Ohio to present their history and connection to this place that they called home so many years ago.

Although it was certainly ancestors of the Shawnee people who built the magnificent serpent shaped mound, the largest earthwork effigy in the world, Ohio failed to involve the tribe in conveying its meaning to the public until now.

Glenna Wallace, chief of the Eastern Shawnee Tribe of Oklahoma and Ben Barnes, chief of the Shawnee Tribe, also located in Oklahoma, spent the weekend telling visitors to the Serpent Mound historical site about their peoples’ and ancestors’ connection to Ohio and the mound.

Although the weekend was hot and muggy, visitors crowded quietly under a covered shelter to hear the chiefs talk of their tribes’ histories and connections to this remarkable place.

Wallace described the devastating impact of federal assimilationist policies such as removal on her tribe.

“The government’s assimilationist policies were almost a successful genocide for my people. By 1900, our numbers were reduced to 69 people,” she said.

According to Wallace, many Shawnee people lost their language, culture and ceremonies.

Both Wallace and Barnes, however, described their peoples’ deep connection to Ohio, the Serpent Mound and the surrounding series of earthworks in the region.

Their overwhelming message is one of reverence and respect for the sacred and a plea for visitors to appreciate and honor the Serpent Mound as they would a cathedral, synagogue or mosque. 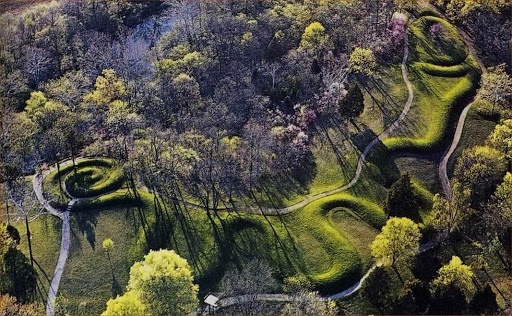 There has been a lot of ludicrous BS perpetrated on and around the Great Serpent Mound, with New Age types positing that the mounds were made by ancient aliens or prehistoric giants and Christian “prayer warriors” trying to “pray down” the “dark forces” that they claim rise from the site. I hope the Shawnee can enforce respect for the work of their ancestors and educate the public in a real and true history that is so much richer than manufactured fantasies. 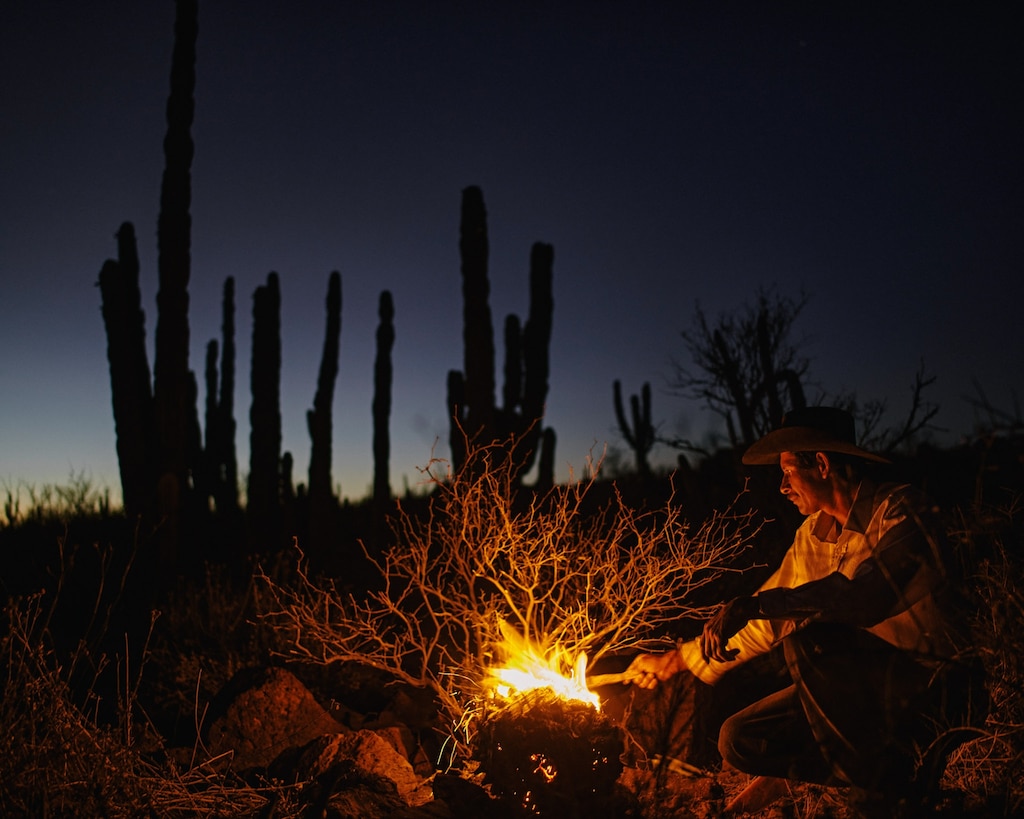 Over the past half-century, the encroachment of the modern world has progressively drawn younger generations away from an off-grid lifestyle that is getting harder to sustain due to changing economics and the intensified effects of climate change. More than a year and a half has passed since the last substantial rainfall in southern Baja. Bereft of vegetation, cattle are growing weaker and more susceptible to illness, while goats are wandering astray in search of browse. “All these forces seem to be piling up against” the vaqueros, says Trudi Angell, a guide and backcountry outfitter based in Loreto, México. “We can say that it’s a dying culture.” 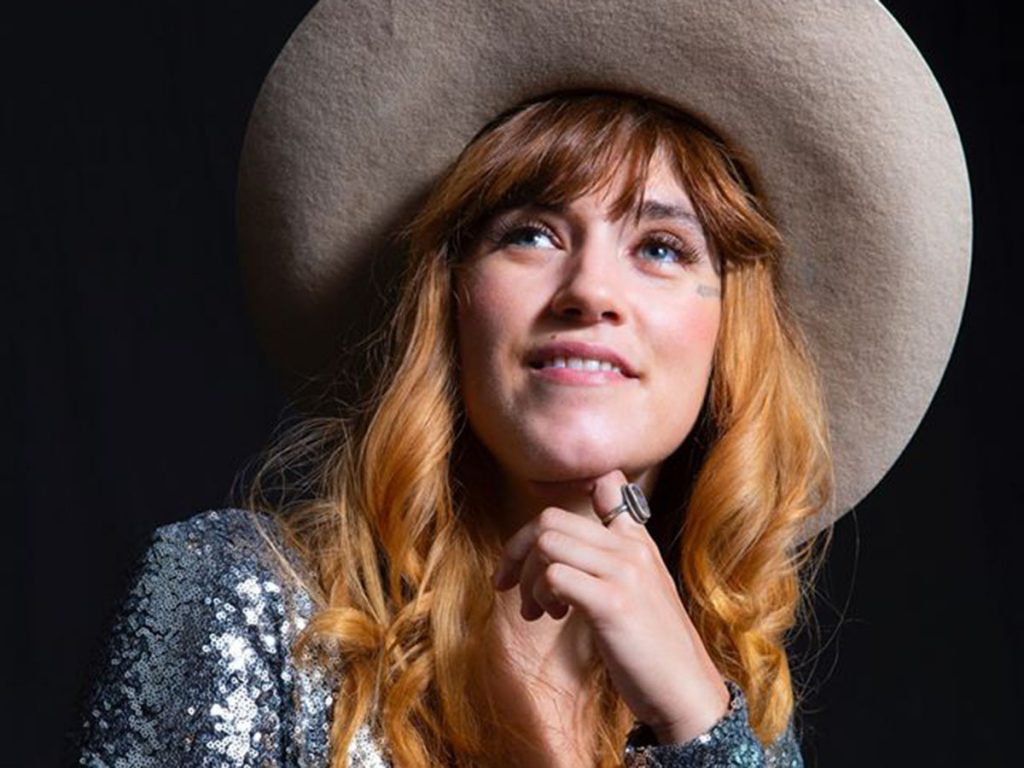 Sisters Folk Festival kicked off its summer concert series on Friday with Sierra Ferrell — the “buzziest” artist on the Americana scene right now. She’s for real. My favorite of her originals is this one:

She says she’s got a country heart, a jazz mind and a punk soul. Reckon that’s about right. It pleases me to see a bunch of 20-something girls come out dressed like her, digging what amounts to very traditional country music with a 1930s jazz inflection.

Sierra Ferrell is on a rocket, so if you can see her in an intimate setting now, do it.

Got the sad news that Scottish historical fiction writer Robert Low has died. His Oathsworn series of Viking novels is a standout, and I’ve written of his Border Reivers series. I corresponded with Low back in the days of The Cimmerian — specifically about the influence of Robert E. Howard on his work. He was a helluva yarn spinner, and I hope he’s in some meadhall in Valhalla doing just that… 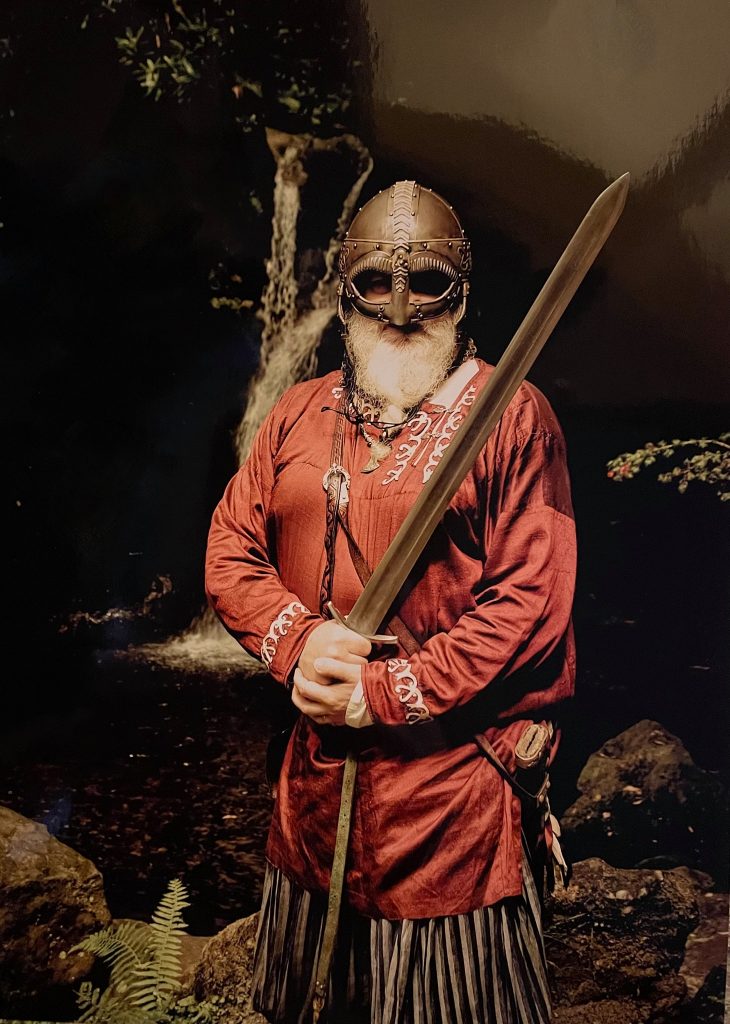