Editor’s note: The following is a guest post by Jeff Siemers. He first became familiar with the Stockbridge Mohicans when he was part of a group of whitewater canoeists and kayakers that was stopped for trespassing on the reservation. He has been researching the tribe’s history since 2003. He lives and works in Fond du Lac, Wisconsin.

He is the author of “Proud and Determined: A History of the Stockbridge Mohicans, 1734-2014.” To purchase his book at a special frontier partisans discount, visit http://www.stockmohistory.com/?page_id=321 and use coupon code “frontier partisans.” Click on the “Buy” button;  a Pay Pal screen comes up (click Pay Pal button) and you’ll see a field labeled “coupon code.” 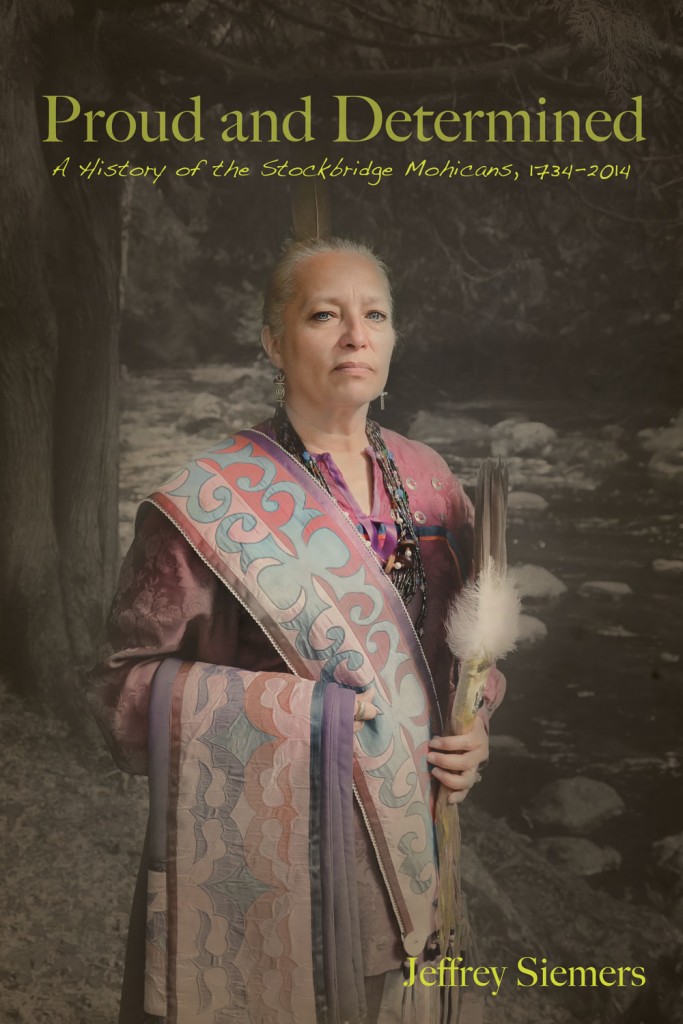 Converting Native Americans to Christianity was a stated goal of the charter of the Massachusetts Bay Colony. Although the British had some success in establishing towns of “praying Indians” in the 1600s, they lost their focus on missions after King Philip’s War worsened race relations.

The objectives of church and state dovetailed again in the 1730s. Governor Belcher imagined an integrated mission town where white Christian families and tradesmen would set an example of “civilized” living for Indians.

The first 125 years of white contact had devastated the Mohicans. A desperate struggle for survival resulted from European diseases and changes in their environment, including the presence of white traders selling firewater. Since their pre-contact religion was no longer intact there was nothing stopping two Mohican villages in western Massachusetts from taking on new ways.

There certainly was religious motivation among the British for establishing a Christian mission in western Massachusetts. But there was no separation of church and state at that time so it wasn’t just politicians, but also Christian ministers, who were keenly aware of the fact that the British needed Indian allies in their ongoing fight for world dominance against the French and France’s own Native allies.

The mission town that was established became known as Stockbridge and its Native residents were not limited to Mohicans, but to a number of remnants from the Algonquian language family. At least some of them were attracted by Christianity as preached in the Mohican dialect.

By 1754 there were already more white settlers in Stockbridge than was originally intended. Both white and Native residents of the town were drawn into the French and Indian War that year when Schaticokes and Abenakis killed livestock, burned a barn and murdered white residents of the town.

Ironically, by fighting for the British, the Stockbridge Indians made western Massachusetts safe for white settlement. Since the war made the mission town safe, more whites wanted to settle there. Historian Lion Miles refers to the period of Stockbridge history that starts in 1759 as “the great land grab.”

Not only were they losing their land in the town of Stockbridge, but the Algonquian-speaking Indians were losing much of their ancestral lands. One Wappinger and three Mohican chiefs sailed to London in 1766 to contest a claim of about 200,000 acres. Unfortunately, the land in question was taken from the Indians by the same men in the British legal system that would ultimately hear their case. This was before the term “conflict of interest” became part of the English vocabulary.

Wanting to get their 200,000 acres back was possibly the Stockbridge Indians’ biggest motivation to side with the thirteen colonies in the American Revolution. Although they fought gallantly, the warriors from Stockbridge received little appreciation. Widows were only given a wool blanket after their husbands made the ultimate sacrifice.

So the Stockbridge Mohicans had to leave Massachusetts. They first took the Oneidas up on an offer to live near them. But the Oneidas, not being from the Algonquian language family, didn’t have a lot in common with the Stockbridges. Tribal leaders like Captain Hendrick Aupaumut soon began looking farther west for another homeland. In fact, the Miamis of what is now Indiana had a longstanding offer open to the Mohicans, an offer that was acknowledged by President Thomas Jefferson in 1808 during a visit from Aupaumut and the Miami Chief Little Turtle.

But things were going on first in Ohio and then in Indiana that would delay the Stockbridges from making their move. The most significant obstacle for that Christian and “civilized” tribe was the movement led by the Shawnee Prophet, Tenskwatawa. Territorial Governor William Henry Harrison implemented an aggressive treaty in 1809, which ultimately transformed the Shawnee Prophet’s spiritual movement into a political confederacy led by his brother, Tecumseh.

Thirty-eight Stockbridges fought in the eastern theatre of the War of 1812 while Hendrick Aupaumut served as a “civilizing agent” to his Delaware brothers and sisters — doing a little spying on the Shawnee Prophet on the side. The war ended well from the Stockbridge Mohicans’ point of view. Tecumseh was killed at the 1813 Battle of the Thames and his brother, the Prophet, fled into Canada.

But when Indiana became a state in 1816, its white leaders made plans to remove the vast majority of Delaware and Miami Indians. They managed to do this before the Stockbridge Mohicans could take their place among them. So the irony of the French and Indian War was repeated with the War of 1812; the Stockbridge Mohicans had made the frontier safe for one more wave of white settlers. Their sacrifices were in vain.

Within a few years of their being shut out of Indiana, the United States government assisted the Stockbridge Mohicans and other New York Indians in establishing a new homeland in what is now Wisconsin. And although hard times would continue for the Stockbridge Mohicans, the irony of having their land taken from them after making it safe for white settlement was not repeated again.