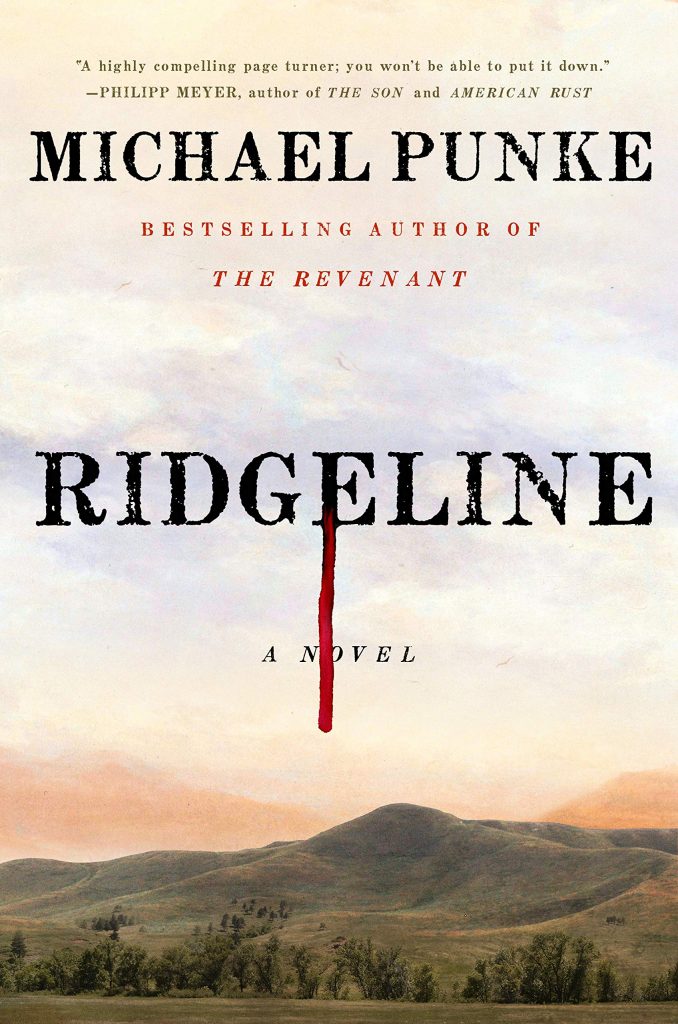 “I do love that there is still a lot of mystery about the Fetterman Fight that will never be resolved. It’s a perfect place for historical fiction to fill in the blanks.”

Punke will explore how he filled in the blanks on one of the most compelling episodes in American frontier history in a Books in Common NW virtual event on Thursday, June 3. The event, featuring his brand-new novel Ridgeline, is presented in partnership between by Paulina Springs Books in Sisters, Madison Books and Country Bookshelf. To attend, sign up at www.booksincommonnw.com. I have been asked to participate as Punke’s “conversation partner.”

Punke previously earned accolades for his historical novel recounting the epic quest for survival of Mountain Man Hugh Glass, who was mauled by a grizzly bear and left for dead by his trapping companions in 1823. The Revenant: A Novel of Revenge was the basis for the Academy Award winning film The Revenant, starring Leonardo DiCaprio as Hugh Glass.

Ridgeline, recounts the military disaster that befell an expeditionary force dispatched into the Powder River Country, east of the Bighorn Mountains in the area of what is now Buffalo, Wyoming, in the summer of 1866. Col. Henry Carrington was assigned to construct a fort along the “Montana Road” (aka The Bozeman Trail) to protect miners and teamsters on their way to recently-discovered goldfields in Montana. The Lakota Sioux, who had, in the 1850s, conquered the territory from the Crow Indians, were having none of it. The Oglala Lakota Red Cloud built an alliance with Cheyenne and Arapaho tribes to throw the invaders out of the Powder River Country. They relentlessly harassed the under-supplied and poorly-armed garrison of Fort Phil Kearny, and repeatedly attacked travelers along the road. By winter, some 70 civilians and soldiers had been killed, and Carrington and his officers were under orders to pursue the Indians more aggressively.

Many of you will recall that I went far down the trail of the Bozeman Trail War in a multipart series in the summer of 2019. Links to that series may be found at the foot of the post.

On December 21, 1866, a force of decoys — traditionally believed to have been led by the young Tashunka Witko, known to whites as Crazy Horse — lured 79 soldiers and two civilians out of Fort Phil Kearney, over Lodge Trail Ridge and out on a long north-south finger of ridge some scholars call High Backbone (better known as Massacre Hill) where a force of more than a thousand Lakota, Cheyenne and Arapaho warriors boiled up out of the gullies and draws flanking the ridge, overran the disorganized American force and rubbed out the soldiers to a man. 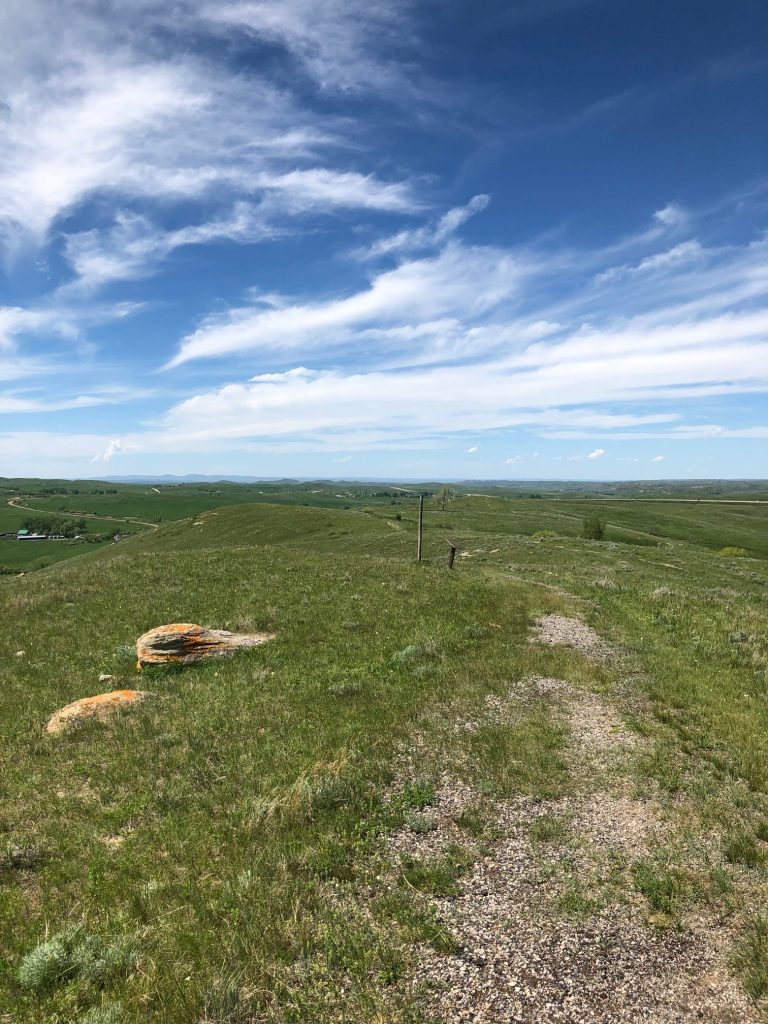 A detachment of U.S. Cavalry, supported by infantry, pursued a small group of Indians along a narrow ridge on the Wyoming prairie on December 21, 1866. The Indian force turned out to be decoys, who led the 81-man detachment into a massive ambush where 79 soldiers and two civilians were killed.

Ridgeline does a remarkable job of humanizing the iconic Crazy Horse. He’s such an iconic figure, and people get so wrapped up in his mysticism that he becomes almost a supernatural figure. Punke evades that trap, in what I consider to be perhaps the best depiction of the warrior I’ve yet read. Punke told me:

“Crazy Horse has always been one of my heroes. I love that in 1866 he is still a young man, and while already respected as a hunter and warrior — he is just beginning to emerge as the great leader that he will become. To me, the fact that he is not perfect makes him more interesting. How did he learn and grow from his mistakes? I also was intrigued with his relationship with his brother and friend — and exploring those relationships also helped to make him more human.”

Punke, who was born in Wyoming and now lives in Missoula, Montana, is a former Deputy United States Trade Representative and U.S. Ambassador to the World Trade Organization in Geneva, Switzerland. He has long had an interest in frontier history and was drawn to recount this relatively little-known tale.

“I have been interested in the Indian War era since I was a boy. As a teenager, I worked for the National Park Service as a ‘living history interpreter’ — dressing up in an 1876 cavalry uniform, firing Springfield rifles and an 1841 mountain howitzer, and baking army bread in a wood-burning oven. As for the story of the Fetterman Fight itself — I think it is one of the most dramatic incidents of the 19th century: a great adventure story, history story, and a cast of amazing, real-life people. And with some great lessons for contemporary America to boot.”

The “official narrative” for over a century blamed Captain William Fetterman, who commanded the detachment that chased the decoys over Lodge Trail Ridge, for falling into the ambush that resulted in the “Fetterman Massacre.” Punke delved deeply into recent scholarship that casts Fetterman in a different light — and shifts blame for the disaster to another officer.

“Ridgeline is historical fiction — but I take the research seriously. For me, the best scholarship (I list sources at the end of the book) makes it far more likely that Lt. George Washington Grummond was the brash officer whose arrogance led others to calamity.”

My own reading into the same sources leads me to the same conclusion. And I love the way Punke handled Fetterman’s purported quote:

“Give me 80 men and I will ride through the entire Sioux nation!”

A large number of women accompanied Carrington’s expedition to build Fort Phil Kearny — from officers’ wives to laundresses. Punke reveals their experience through the device of a pair of journals — one “public” and the other private” — kept by Lt. Grummond’s young, pregnant wife Frances. He noted:

“Women are often underrepresented or ignored in telling the history of the West. In my time working at Fort Laramie, I learned a lot about the role of women in a 19th century U.S. Army post  — especially the laundresses and officers’ wives. So I was eager to portray those characters in Ridgeline. Frances Grummond actually wrote an autobiography, which gave me a feel for her voice and the idea of presenting her character through fictionalized journal entries.”

Physical ridgelines loom large in the story — as vantage points, points of exposure and, fatally, lines of demarcation. Those ridgelines gave the novel its title.

“I live in Montana and stare every day, from my home, at a couple of evocative ridgelines. The fateful battle in Ridgeline occurs when the U.S. Army rides over Lodge Trail Ridge —  against orders and after Crazy Horse brilliantly leads a group of decoys. The idea of ridgeline as a central metaphor and title came early in the writing process. To me, a ridgeline is a line between known and unknown. All of the characters in Ridgeline are struggling to control their lives in the face of dramatic change.”

Rich in its evocation of a historical period of profound change and disruption, full of dramatic tension, even though the outcome is obviously known to history, Ridgeline makes for a compelling read, and will surely make for a lively discussion. is available at Paulina Springs Books in Sisters. A recording of the virtual event will be available afterwards on the Books in Common NW Youtube channel. 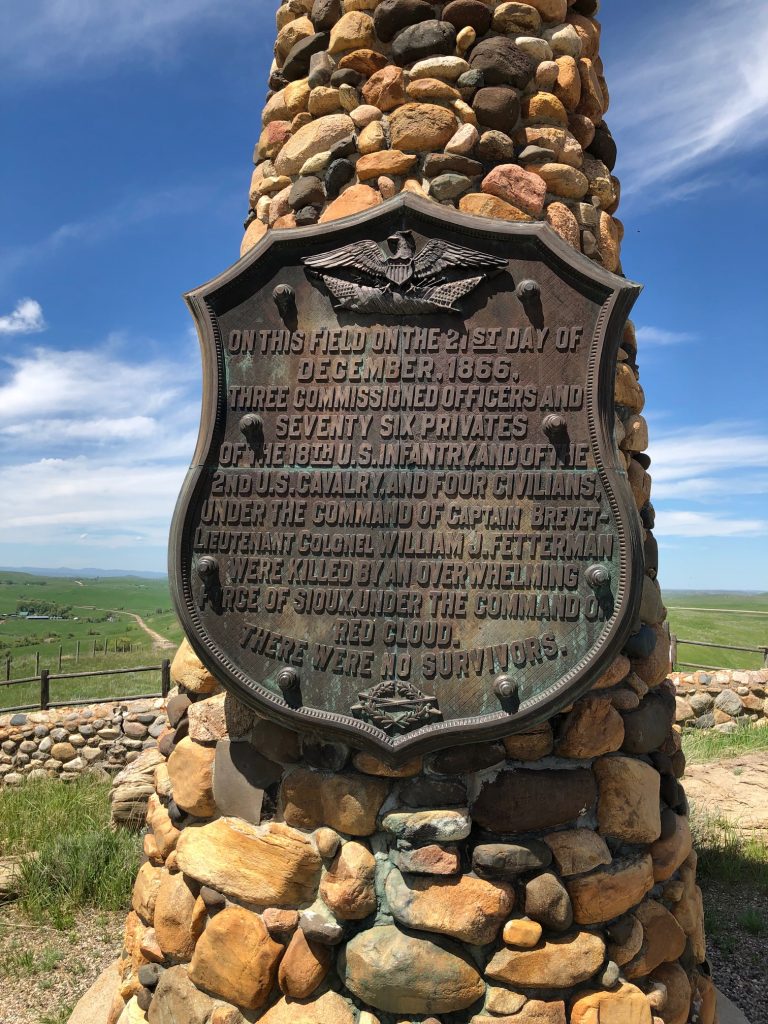 A cenotaph was erected on the site near Buffalo, Wyoming, where Captain William Fetterman and the last remnants of his command fell to an ambush by Lakota, Cheyenne and Arapaho warriors in 1866.

The Bozeman Trail War — Part I — Spoils Of Conquest

The Bozeman Trail War — Part V — One Hundred In The Hands