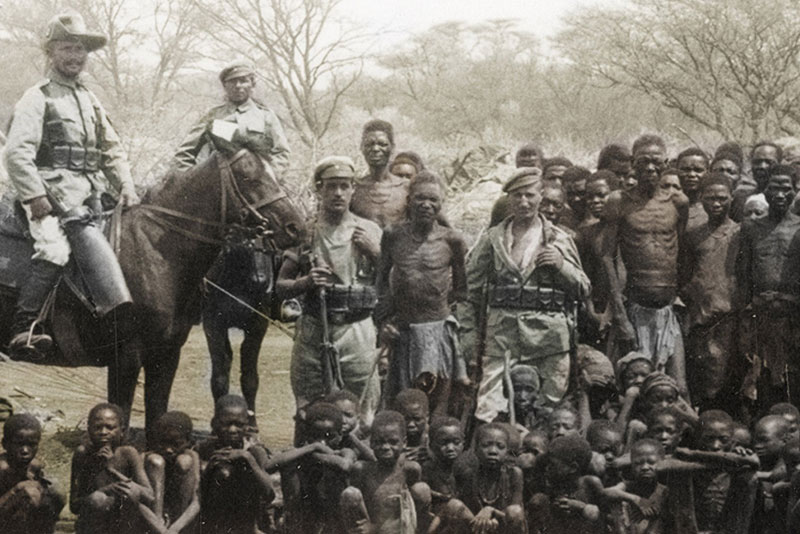 One of the strengths of the HBO documentary Exterminate All The Brutes bringing to light little-remembered events like the early 20th Century Herero Revolt in German Southwest Africa.

I gave it my best shot. Truly.

All four hours of Raoul Peck’s sprawling HBO documentary Exterminate All The Brutes. It is, as I expected, a full-throated indictment of Western Civilization. If you are inclined to believe that the “settler-colonialism” of the West is fundamentally genocidal and evil — and that that is pretty much all Western Civilization has to offer —  Peck’s epic work will fuel that perception. And, perhaps, a sense of righteous rage and loathing, properly directed at white males. That’s where the whole thing points.

There are some compelling aspects to Peck’s work. It is enormously ambitious in scale, covering 500 years of history and a vast geography. Events that scarcely anybody has heard of — like the Herero Revolt in southwest Africa — get coverage. There is some exceptional archival footage.

Some of Peck’s techniques hit home. For me, a montage of rarely-seen historical photographs of European men, mostly in Africa and Southeast Asia, smugly leering at and feeling up native women, elicits the kind of disgust that makes you want to reach through the screen and across centuries to punch them in the face. Juxtaposing these photographs with lurid pulp magazine covers depicting wild eyed Black men leering at and/or assaulting white women is quite effective at driving home a certain point about reality and constructed narrative.

Much of the history is quite good (though I have to say, dating the start of the American Revolution at 1763 is either an egregious error or a bit perverse).

I was impressed with the detailed rendering of the Battle of Omdurman in the Sudan in 1898 as a watershed moment in which “whatever happens we have got/the Maxim gun and they have not” played out in the slaughter of a massive Mahdist army. The technological capability of “killing at a distance” enabled the imperialists of the day to hasten what they believed to be the ultimate demise and disappearance of “lesser” peoples.

Of course, Peck makes no mention of the sanguinary cruelties of the early Islamic militants, who were building an empire of their own.

That’s a fundamental weakness of the thesis that Western Civilization is somehow unique in its tendency toward slaughter. Our civilization is  exceptionally capable in that arena — because of unprecedented technological advancement. We also have extraordinary capabilities in other technological arenas — medicine for example, or engineering. 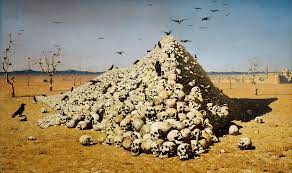 In the end, Exterminate All The Brutes is undone by Peck’s self-indulgence. It caroms around like a billiard ball, jolting in seconds from the Monroe Doctrine to Hiroshima. There is no context other than the driving narrative, which is that Western Civilization is racist, murderous and evil. That civilization is presented as monolithic, as if there were no cross-currents.

And, again as expected, the native peoples are portrayed entirely as victims, with little or no agency. I’d like to ask Peck who actually killed Sitting Bull and why. He knows, of that I am certain — but the answer doesn’t fit the narrative.

The scripted dramatic vignettes are just dire. Peck deliberately introduces wild anachronisms; to what purpose is obscure. Marilyn walked in on one and thought it was some sort of Monty Pythonesque satire. He puts words into peoples mouths that they never said, and overlays it all with bizarrely out-of-place musical accompaniment. A slaughter of a Spanish shore party in the surf by (presumably) Arawaks wearing board shorts, with a jazz soundtrack. Yeah.

I really lost patience with the depiction of a press conference with (a caricature of) William Tecumseh Sherman, slagging off on “fake news.” Bah! As I told Marilyn, Peck’s self-indulgence renders his serious work silly.

Peck really has it in for the Scots-Irish — and their descendants, whom, we’re told, lead the charge in Second Amendment activism, defending a constitutionally-enshrined guarantee of a right purpose-built to allow white men to kill Indians and keep slaves in check.

So… that’s what Exterminate All The Brutes is. In a sense, it’s an evolution of my Native American history classes at UC Santa Cruz. As with those, I’m not sorry I experienced them, but I can’t recommend the experience, either.