Stumbled across a Howard Terpning that I’d never seen before. I love his scenes depicting the intertribal warfare of the Northern Plains and Rockies in the early 19th century. Warfare among the Blackfoot, the Crows and the Lakota, among others, was endemic — and so culturally important that it remained their primary focus even in the face of the might of the U.S. Army. in fact, many of the scouts who enlisted on behalf of the Americans did so to get another good crack at their tribal enemies.

This scene is strikingly dynamic. Apparently Terpning had his models ride in and out of that stream over and over again so he could capture the splash of the water just right. A glorious piece by a master. 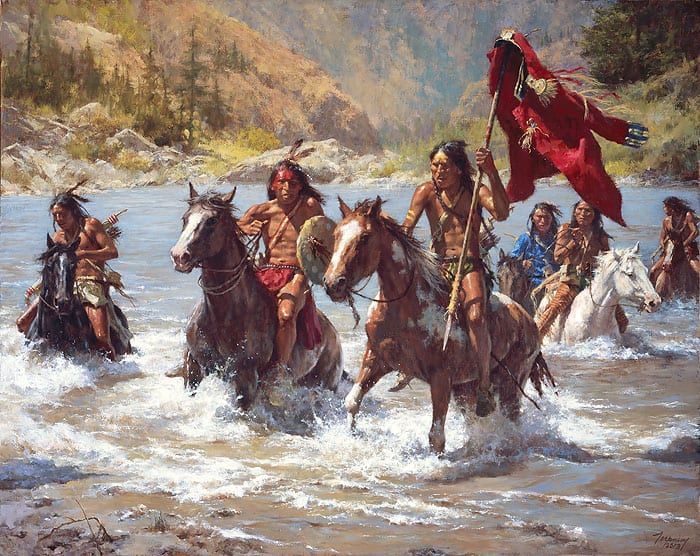 A group of Blackfoot warriors rides away with a sense of accomplishment and pride as they wave aloft, like a flag, the valued coat of a neighboring Crow chief. Presented by the U.S. Government to the most highly regarded Indian leaders, these unique coats became a prize worthy of capturing.

“Capturing the Chief’s Coat” won the InSight Gallery Thomas Moran Memorial award for exceptional artistic merit at the 2014 Masters of the American West, and set record price paid for an original Howard Terpning.

Previous Post: « You Can Run On For A Long Time
Next Post: Working The Trapline — Something Seaxy »