Editor’s note: It would be hard to overstate how thrilled I am to publish a knife article from my friend Greg Walker. I discovered Greg’s knife writings when I was a frontier history-obsessed teenager. I was fascinated with knives as tools and weapons of the frontiersmen, and this Special Forces soldier was writing right in my wheelhouse. I chanced to connect with Greg many years later when I was Editor of The Nugget Newspaper and he called me regarding a case as a detective with the Deschutes County Sheriff’s Office. When I realized who I was talking to, all professional considerations fled; all I cared about was that this was GREG WALKER, THE KNIFE WRITER.

We’ve since become friends, and Greg lives in Sisters. And, it seems, he’s back to writing about knives. On Frontier Partisans. The trails life leads us down are wondrous indeed.

Born in Limerick, Ireland, Michael Price was himself the son of a notable Irish knifemaker. Seeking to escape the dreary conditions of Ireland he chose to immigrate to America where he would establish himself in the craft taught him by his father. Price made his way to San Francisco, California, where in the 1860s a man of his skill and talents with edged steel were welcome and indeed necessary.

“San Francisco was founded on June 29, 1776 by colonists from Spain. The California Gold Rush of 1849 brought rapid growth as treasure seekers flocked to the area in search of a fortune. Silver discoveries further drove a surge in the population. With hordes of people streaming through the city, lawlessness was common, and parts of the city gained notoriety as a haven for criminals, prostitution and gambling.”

Price arrived in San Francisco in 1856. He is reported to have begun earning his initial “grubstake” as a water pipe foreman. Price began making knives in earnest in 1858. He won both growing attention and high acclaim while exhibiting at the very first Mechanics Fair in San Francisco where he advertised no better steel could be found in any other knife made by his competition. Price knives and edged tools came with form-fitted leather and/or metal scabbards, belt clips, and often his signature bulbous grips. His and his father’s working knives are most often found relying on cured stag grip panels, carefully fitted, and pinned to the blade’s full tang.

In 1859, Price set up his first cutlery shop in the corner of the firearms store of A.J. Taylor. Taylor was a popular arms dealer who sold, among other noteworthy firearms, the highly popular derringer. He was shot in the face with his own merchandise by a careless client according to San Francisco legend…and lived to talk about it. By 1860, Michael Price was swiftly becoming a popular California knifemaker. He designed and made everything from utility blades to first-class gambler’s push daggers and the ever-popular Bowie style knife. His father, who had specialized in working knives for his Irish customers, soon joined his son. A Price bowie was said to be capable of being stabbed through a stack of three silver dollars while still retaining its edge.

Also different from other makers’ work in San Francisco at the time was this: A Price bowie knife, or any of the large camp knives offered by the Prices, were “heavy bladed.” They were meant to be used and used hard by buffalo hunters, miners, gunslingers, cattlemen and those pioneers traveling northward into the Pacific Northwest and Alaska. The perfect balance of a Price camp knife became legendary around campfires throughout the frontier. 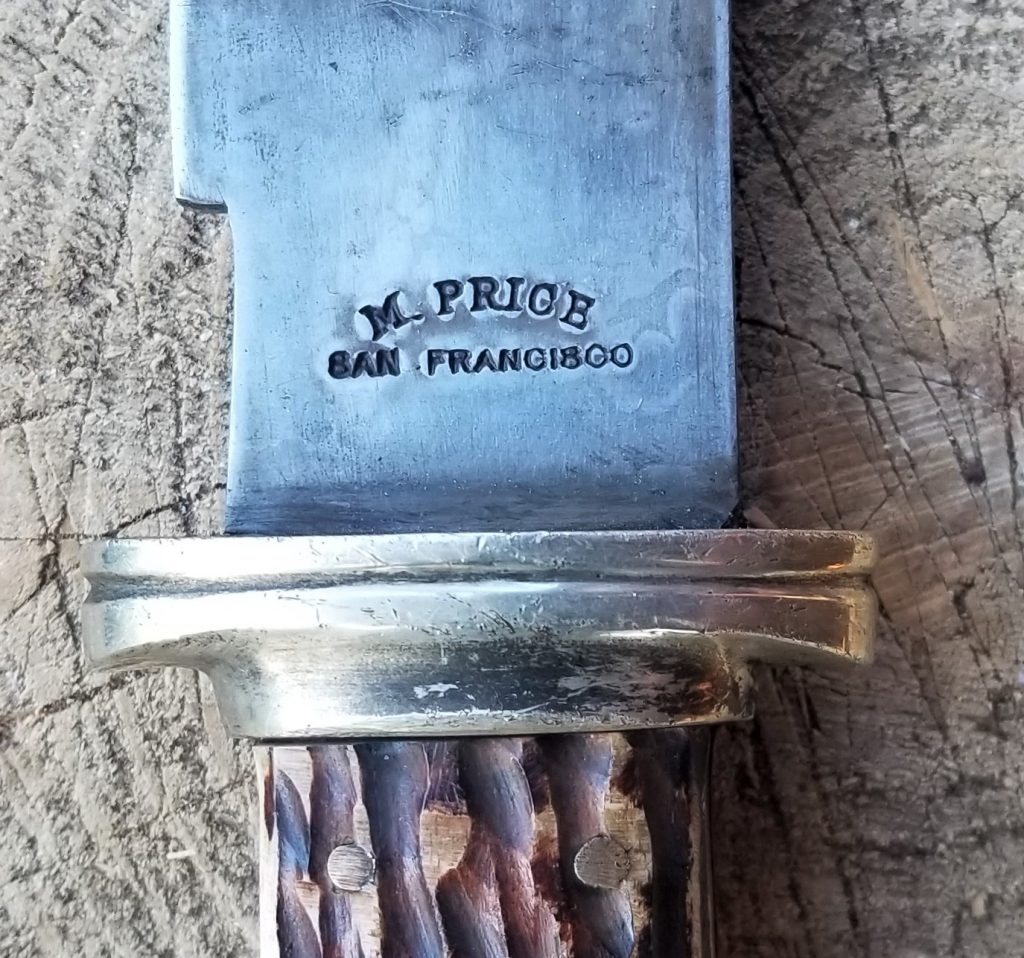 The Price maker’s mark was often just slightly off-kilt upon being applied to the finished knife. “M. Price – San Francisco” became a much sought after “silent partner” by gamblers, lawmen, outlaws, pioneers, and gentlemen collectors passing through or living in San Francisco, California. Credit: Author

Michael Price Sr. instilled in his son the gift of thoughtful yet elegant design for their knives and other edged products, such as the popular Price straight razor. The two established the crucial understanding of both Form and Function, emulated by their competitors who sought to keep up with the dynamic duo. Their workmanship, the materials used, heat treating and tempering, and the correct edge geometry for each style of blade made a Price knife unique among all others. An original Price knife fits the hand like a custom-made glove and becomes an extension of the man or woman wielding it.

I can attest to this as I am blessed to own one.

Any Frontier Partisan would be proud to own a Price bowie knife such as the author’s. Custom forged steel, brass double guard, fitted and pinned stag grips, and form fitted leather scabbard with German silver fittings make this Price edged tool both beautiful and functional. Credit: Author

Price Jr. found his niche by creating what are today commonly referred to as “Art knives”. He worked with exotic handle materials such as ivory and abalone shell. His ability to meld gold and silver into a design, using these precious metals to form a blade’s guard and pommel, as well as for the ever-important sheath or scabbard, captured the imagination of those who could afford a Michael Price gentleman’s “silent partner”. Precious jewels and stones would likewise become a decorative trademark of Price’s. Today, examples of Price knife art reach astronomical prices at auction as do his working knives and tools such as Price made corkscrews.

Michael Price is no doubt the best known “California Knife” maker of the 19th Century. His California, or “San Francisco Bowies” as they are commonly referred to, are each unique in their design to include form-fitted metal scabbards and belt clips.

Michael Price passed away in April 1889, four years after his father. However, their work lives on in collections around the world. The son-father team are today credited with inspiring modern American designers and makers such as Al Mar, Bill Bagwell, Bill Moran, Gil Hibben, and other equally legendary giants in the realm of edged weaponry and daily use tools.

A Price made edged weapon, art knife, or daily use utility blade was the stuff of a decerning Frontier Partisan whose life depended on nothing but the best. 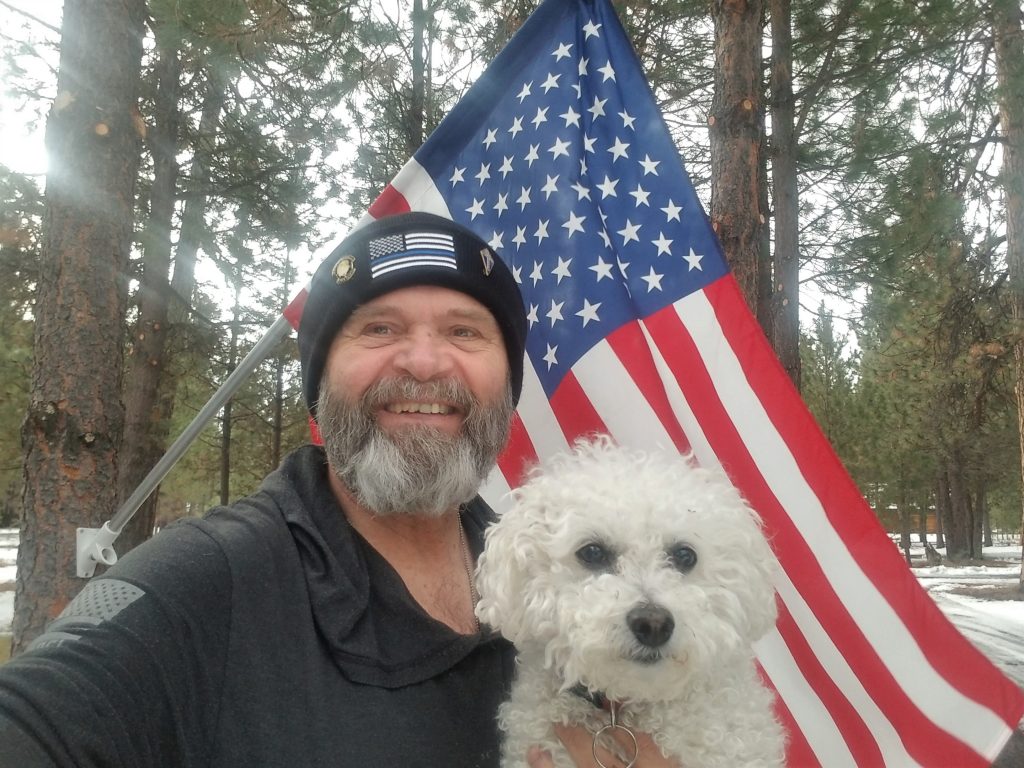 Greg Walker’s professional career path includes service to his community and country as both an Oregon law enforcement officer and Army Special Forces soldier, or “Green Beret”. He founded and chaired Fighting Knives and Full Contact magazine as these titles’ Editor in Chief and is the author of “Battle Blades – A Professional’s Guide to Combat/Fighting Knives” and “Modern Knife Combat – The Training of a Knife Fighter” from Paladin Press. In 2005, Mr. Walker was named as one of the 20th Century’s leading military close combat authorities by International Close Combat Instructors Association founder, Mr. Tank Todd (“Military Combative Masters of the 20th Century”, Todd Group).

Today, Greg lives and writes from his home in Sisters, Oregon, along with his service dog, Tommy.