Highlanders fought the battles of Empire in the wilderness of North America. Art by Randy Steele. https://randy-steele.pixels.com/

The new episode of The Frontier Partisans Podcast series on the Highlanders is up. Access it here.

I’m quite pleased with this episode, which covers the Highlanders’ role as soldiers on the frontiers of the British Empire during the French and Indian War and its aftermath.  It’s a fascinating phenomenon — Clansmen who had been crushed by the British Army at Culloden were fighting and dying in service to the Crown a decade later. Economic necessity explains it — in part — but there’s far more to it. Service in the British Army allowed young Highland men to regain a martial culture — the arms, music and dress that represented their identity were restored to them. Their loyalties to Clan became loyalties to Regiment.

The number of Highland Scots in the British Army in North America during the French and Indian War was significant — about a quarter of the force and a third of the officer corps. And they took a wildly disproportionate number of casualties. The Army’s casualty rate was 9 percent; they Highland Regiments 32 percent. General James Wolfe, who led Frasers Highlanders at the decisive Battle of Quebec, had — rather callously — extolled the virtues of the troops thus:

“I should imagine that two or three independent Highland companies might be of use; they are hardy, intrepid, accustomed to a rough country — and no great mischief if they fall.” 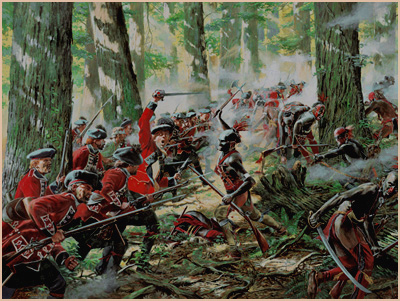 The Highlanders defeated a large force of Shawnee, Delaware and Mingo warriors in a hard-fought battle at Bushy Run in 1763. Art by Don Troiani. https://www.dontroiani.com/

Highlanders fought with exceptional discipline, skill and fortitude in the sharp scrap at Bushy Run during Pontiac’s Rebellion, earning the  praise of their commander, the Swiss mercenary Henry Bouquet:

“The Highlanders are the bravest men I ever saw. Their behavior in that obstinate affair does them the highest honor.”

There will be a one-week gap between episodes, due to a small expedition across the Misty Mountains. Then we’ll catch up with the Highlanders who came to dominate the Canadian Fur Trade.