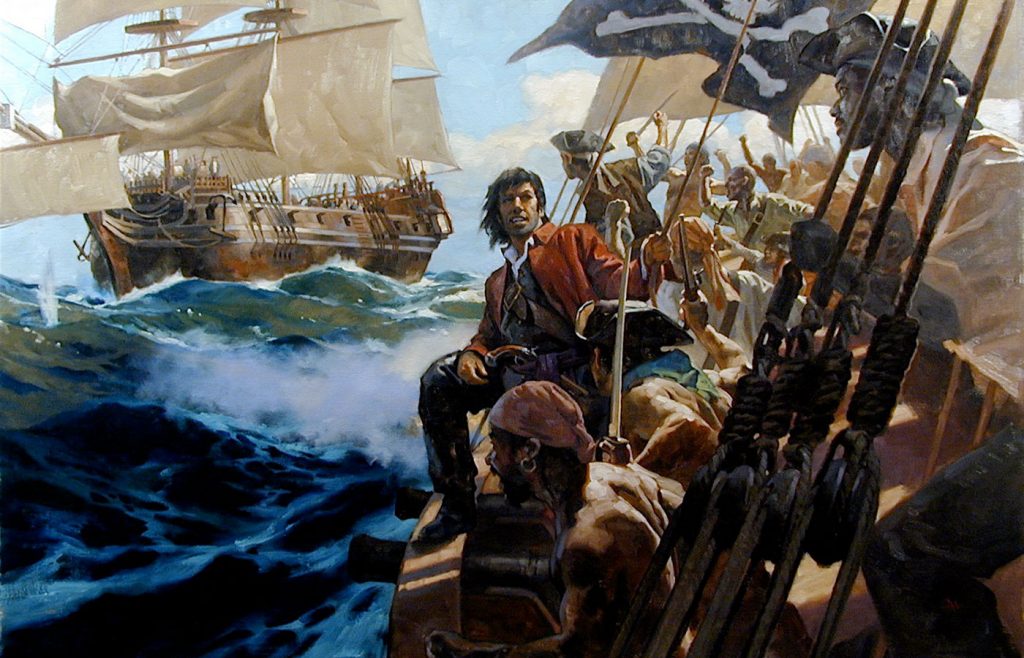 Gregory Manchess’ depiction of Black Sam Bellamy and the crew of the Whydah going after a prize. The Whydah is the greatest archeological find concerning the pirates of the early 18th century.

Woke up to a stunning piece of news that  shivers me timbers… via the Boston Globe:

The investigative team at the Whydah Pirate Museum in West Yarmouth on Wednesday announced what it said was the discovery of the remains of at least six skeletons recently unearthed from the wreck site of the Whydah, a pirate ship that sank in waters off Wellfleet in 1717.

The remains, identified in several large concretions, are currently being examined by underwater explorer Barry Clifford and his team, the museum said in a statement. Clifford, the statement said, in 1984 discovered the Whydah Galley, which remains the world’s only authenticated pirate wreck.

“We hope that modern, cutting-edge technology will help us identify these pirates and reunite them with any descendants who could be out there,” Clifford said in the statement.

I ain’t kidding, mates — when I saw that in my news feed, I got a shiver of frisson. The sea gave up a great gift to history and archaeology when she gave up the wreck of the Whydah — and the gift keeps giving. I highly recommend spending some time exploring The Whydah Pirate Museum website. If every I get myself to Captain Paul McNamee’s territory in new England, the actual museum is high on my list of places I must visit.

One of the most exciting aspects of this most recent find is that it is just possible that they’ll be able to identify the remains of Captain Bellamy.

Another member of the Whydah team, author Casey Sherman, a senior vice president at Reagan Communications who released Wednesday’s statement, obtained Whydah Captain Sam Bellamy’s DNA through a bloodline descendent in England in 2018 and had the sample tested against a human bone found in the wreck, the release said.

“That bone was identified as a human male with general ties to the Eastern Mediterranean area,” Sherman said in the statement. “These newly found skeletal remains may finally lead us to Bellamy as we now have his DNA.”

Black Sam Bellamy was on an exceptional run in 1716-17. He had been elected captain of a robust pirate crew after they deposed Benjamin Hornigold because Hornigold was squeamish about attacking English merchant ships. Black Sam had so such scruples. He was most content to be “an enemy of all mankind.” There is a fine rant attributed to him from Captain Charles Johnson’s A General History of the Pirates (Johnson is thought by many to be a pseudonym for Daniel Defoe):

“…You are a sneaking puppy, and so are all those who will submit to be governed by laws which rich men have made for their own security; for the cowardly whelps have not the courage otherwise to defend what they get by knavery; but damn ye altogether: damn them for a pack of crafty rascals, and you, who serve them, for a parcel of hen-hearted numbskulls. They vilify us, the scoundrels do, when there is only this difference, they rob the poor under the cover of law, forsooth, and we plunder the rich under the protection of our own courage. Had you not better make then one of us, than sneak after these villains for employment?”

Bellamy’s crew went on a tear, capturing at least 53 prizes — including the galley and former slave ship the Whydah, which became his flagship. Bellamy was not a brute — he did not engage in needless slaughter or cruelty, as some pirates did. As was common among the captains of the Golden Age of Piracy, he ran his crew in a democratic fashion that was radical for the age — and it seems that he was well-beloved by his fellow pirates. He cut quite a dash in a fine velvet coat, knee breeches, silk stockings, and silver-buckled shoes. He packed a sword and four dueling pistols. He eschewed the fancy wigs of the day and grew his dark hair long, tying it back in a queue with a black satin bow.

Bellamy’s exceptional run ended when the Whydah was wrecked in a terrible nor’easter off Cape Cod on April 26, 1717. Legend has it that one of the reasons the ship was in the area was that Black Sam wanted to visit his lover, Maria Hallett. The ship grounded on a sandbar and capsized; only two of the 145-man crew survived. Bellamy went down with his ship.

The find of the skeletons is thrilling, no matter what. But I can’t help hoping one of them is, indeed, the dashing, charismatic Prince of Pirates.

Take a moment and doff your hat or cap and raise a horn to one of the greatest among the partisans of the maritime frontier.