Reinhard Heydrich (left) and his younger brother, Heinz (right), grew up in an educated household. Both were musically gifted with Reinhard becoming an exceptional violinist and Heinz a gifted musician playing the cello. In later years both would be invited to play in a quartet hosted by Admiral Wilhelm Franz Canaris at his home in Berlin. Reinhard and his wife, Lina, lived near the Abwehr (German Military Intelligence) chief who directed intelligence operations on behalf of Hitler from 1935 until his execution per Hitler’s order in 1944. Canaris is attributed as offering, just before his brutal death in a Nazi prison:

“I die for my fatherland. I have a clear conscience. I only did my duty to my country when I tried to oppose the criminal folly of Hitler.” 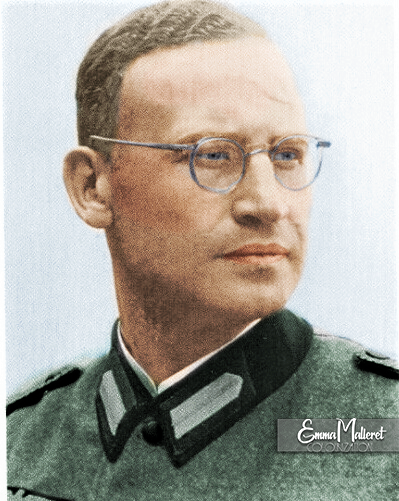 Heinz was devoted to his older sibling and became his protector during their childhood years. Tall, gangly, and with an odd voice that did not match his physical appearance, Reinhard was often picked on to include being called “a Jew.” In one such instance Heinz came to his brother’s defense by pulling a knife on a group of local boys who were taunting Reinhard. His own appearance was dramatically the opposite of Reinhard’s, a fact that spurred Heinrich Himmler to once offer if anyone in the Heydrich family looked like a Jew it was Heinz.

After Germany’s defeat in World War I, and with the subsequent economic depression that wracked Germany, both brothers joined their local Freikorps unit. These units initially helped protect Germany’s borders but soon became street-fighters against the emerging German communist influence, and those supporting it. Reinhard in particular identified with the Freikorps ideology and its mission to save Germany from “the Reds,” which came to include Jews. Heinz, whose passion was journalism, would find his place in the new Nazi Germany as a spitfire anti-semetic writer. He became the editor of the “Munich Illustrated Press” in Berlin, and also an employee of Ministerialrat Kurzbein.

Per Edouard Calic’s excellent biography of Reinhard Heydrich, the rabid anti-Semetic hated of the Jews possessed by the elder brother echoed in H. Heydrich’s articles. For example, given a position in the Berlin office of the Muenchener Neuesten Nachrichten just after the Reichstag fire in February 1933, H. Heydrich wrote:

“The First and Second Reichs failed because they refused to take account of biologicial and racial principles resulting from the laws of nature…This Reich will be cleansed of its Jews.”

H. Heydrich would go on to directly advise and assist in “the first organized boycott against the Jews (April 1, 1933). https://www.ushmm.org/learn/timeline-of-events/1933-1938/anti-jewish-boycott

As Reinhard’s star rose within the NSDAP so did his brother’s to include Heinz’ acceptance by the SS as an officer (Nazi Party number #2,637, 285 / SS # 36,225). As an officer in the SS Heinz swore an oath of loyalty to Hitler, promising “absolute allegiance.” The SS motto was Meine Ehre Heist Treue (“My honour is loyalty”).

“The racial requirements for SS officers were even more stringent. During the 1930s, officer candidates had to provide certified evidence of Aryan heritage dating back to 1750. The presence of a Jewish ancestor – even just by marriage – was enough to have an application refused. Those already in the SS were subject to strict rules about mixing, fraternising or fornicating with persons of undesirable racial origins. Before marrying, an SS officer had to provide evidence of his wife’s Aryan status and good character.”

Heinz Heydrich was proud of his membership in Himmler’s elite Black March. 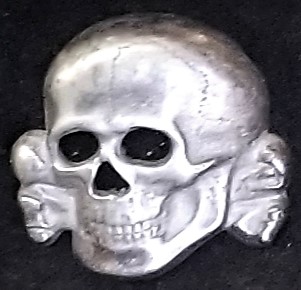 “The training ground routines placed a heavy emphasis on camaraderie and co-operation, and the officer cadets were instilled with the idea that although they were ultimately responsible for the actions of their team, they were always to see themselves as members of that team.”

And Heinz Heydrich was a good team player.

Heinz, an SS officer, was commissioned by his brother as an agent in the SD, or Sicherheitsdienst. On a list of SD employees obtained by journalist Axel Huber from the Special Archive in Moscow the name “Heinz Heydrich” is present.

The Sicherheitsdienst des Reichsführers-SS (Security Service of the Reichsführer-SS), or SD, was the intelligence agency of the SS and the Nazi Party in Nazi Germany. Originating in 1931, the organization was the first Nazi intelligence organization to be established and was considered a sister organization with the Gestapo (formed in 1933) through integration of SS members and operational procedures. The SD was administered as an independent SS office between 1933 and 1939, after which it was transferred to the authority of the Reich Main Security Office (Reichssicherheitshauptamt; RSHA), as one of its seven departments/offices. Its first director, Reinhard Heydrich, intended for the SD to bring every single individual within the Third Reich’s reach under “continuous supervision”. His appointment to the SD allowed for the younger Heydrich to, legally under Nazi law, spy on anyone and everyone who Heinz may have worked with, served with, served under, or otherwise came into contact with. His commission as an SD agent also gave Heinz Heydrich direct access to his brother and through him, all plans, policies, and orders regarding both the Final Solution of the Jewish Question and the Holocaust from the earliest days of the two brothers’ embracing Nazi ideology and goals / objectives.

Note: Following Germany’s defeat in World War II, the tribunal at the Nuremberg trials officially declared the SD a criminal organization, along with the rest of Heydrich’s RSHA (including the Gestapo) both individually and as branches of the SS in the collective. Heydrich’s successor, Ernst Kaltenbrunner (far right) was convicted of war crimes and crimes against humanity at the Nuremberg trials, sentenced to death and hanged in 1946. HHeydrich remained as SD agent after his brother’s death and continued to have direct access to his successor’s office, as well as to Heinrich Himmler, the godfather of his brother’s children. 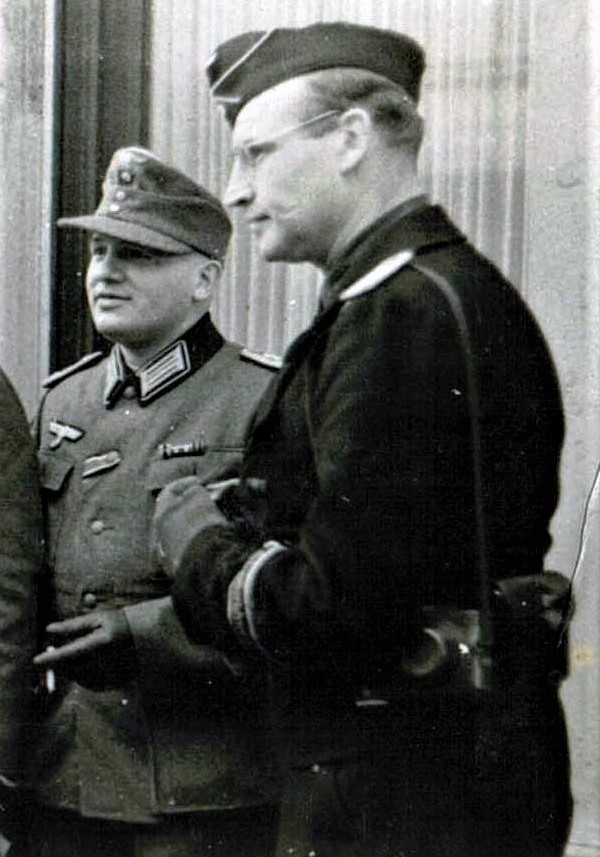 As the SS was officially a political organization its members could, and did join formal German military units and held military ranks in these units. For example, although Reinhard Heydrich was an SS general (OberGruppenfuhrer at the time of his death in 1942), his rank in the Luftwaffe was that of a major. Heinz Heydrich was called up in the Wehrmacht. He maintained both his SS rank and his role in the SD as an agent. Himmler wanted SS officers in the propaganda field to represent the interests and actions of the SS, particularly on the Eastern Front. HHeydrich fulfilled that important niche.

PzPK 697, his last assignment, was subordinate to the German 3rd Armored Army although for a short time it fell under the German 9th AOK. Heinz Heydrich “grew up” in the PzPK 697. In 1942, when he arrived at the unit he was a “Feldwebel”, or sergeant. By 1943 he had been promoted to 2nd Lieutenant by his commanding officer, Dr. Kurt Fischer. At the time of his suicide in late 1944 he had been promoted in the SS to the rank of Hauptsturmfuhrer, or captain. Some of the most infamous SS members known to have held the rank of Hauptsturmführer were Josef Mengele, the infamous doctor assigned to Auschwitz; Klaus Barbie, Gestapo Chief of Lyon; Joseph Kramer, commandant of Bergen-Belsen concentration camp; Alois Brunner, Adolf Eichmann’s assistant; and Amon Göth, who was sentenced to death and hanged for committing multiple waves of mass murder (liquidations of the ghettos at Tarnów and Kraków, the camp at Szebnie, the Kraków-P?aszów concentration camp, as portrayed in the film Schindler’s List).

Contrary to the myth, H. Heydrich was not the editor of the wartime publication Die Panzerfaust, produced and distributed to the 3rd Armored Army during Operation Barbarossa, the invasion of Russia. He was a photographer and responsible for daily pictures of military operations and writing photo captions for these. He sometimes authored stories to accompany his images. As a frontline photographer he was often in the thick of combat engagements and photos taken of him by other Pk correspondents show he enjoyed the comradeship only found among combat troops. Among his awards and decorations was the Panzer assault badge for being personally involved in combat engagements against the enemy.

At the same time propaganda correspondents like Heydrich were provided unfettered access to ALL battlefield and rear area operations to include mass killings. Per Wehrmacht Propaganda Troops and the Jews by Daniel Uziel:

“It is well known that news in the Third Reich was conceived as a form of propaganda. From the beginning of the war, a central component in the activities of the propaganda troops was the preparation of combat reports. The PKs were the only news-reporting units able to move unhindered into areas of military operation and gather news. Starting with the occupation of the Sudentenland, civilian reporters were prohibited from entering zones of military activity. This exclusive right placed the PKs in a position to provide concrete topical reports on the Jews in the occupied territories, principally in the East.”

Each Wehrmacht Pk “…included platoons and squads of newspaper and radio journalists, photographers, cameramen and propagandists, as well as printing presses and batteries of propaganda rocket launchers.” In HHeydrich’s case he was assigned to and worked from a specially constructed train which allowed for swift travel as well as the timely distribution of Die Panzerfaust and other propaganda products. Again, from Daniel Uziel, “The Propaganda Department even had two cargo planes at its disposal; on constant alert, they stood ready to fly to the front, pick up material, and speed it back directly to Berlin.” 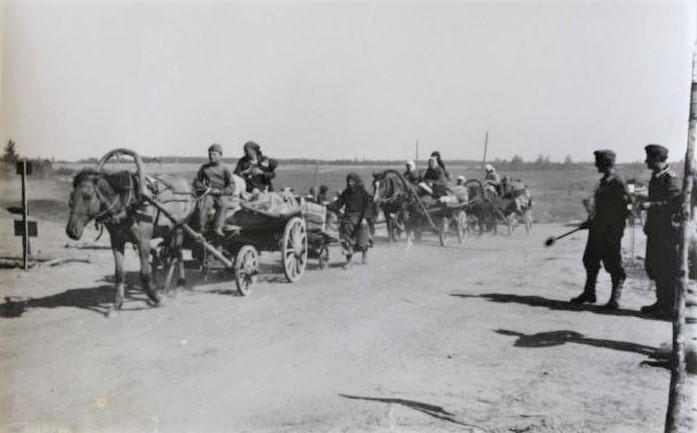 “On 22 June 1941, 59 battalions of the Security Police crossed the eastern border into the U.S.S.R. with orders to kill all Jews on the spot. In the newly taken cities and towns, Jews were caught, gathered up, and shot en masse. They were placed before anti-tank ditches and prepared graves and mowed down with rifle salvos. As the trails of blood ran deeper into Soviet territory, SS and Police reinforcements poured into the area, the army was pressed into service, and native helpers pitched in. The killings increased and efficiency became more pronounced. The victims were forced to lie in the ditches, the head of the man awaiting the bullet on the feet of the corpse below. Soon, gas-vans appeared on the scene to suffocate women and children. After two years of this carnage, the mass graves of the east contained the bodies of about 1,400,000 Jews.”

Heinz Heydrich was a frontline witness to the carnage ordered by his brother and was therefore fully accepting of the mass killings of women, children, infants, men, and the elderly. He firmly believed what he wrote to his German readership in 1933:

“But the Third Reich, which will be built by the German messiah [Hitler], is founded for all eternity.”