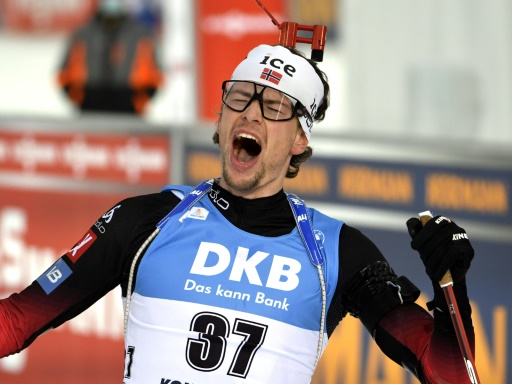 Thanks to an early-morning text from Captain Schwertfeger, I got to catch some biathlon action from Hochfilzen, Austria. We’re witnessing something remarkable. Norwegian rookie Sturla Holm Laegreid won his first race of the season — a big accomplishment that kinda shocked the biathlon world. He hasn’t stopped shocking the world. He won the 10km sprint and I just watched him blow away the field to take the 12.5km pursuit.

Here’s how that works:

In a pursuit, biathletes’ starts are separated by their time differences from a previous race, most commonly a sprint. The contestant crossing the finish line first is the winner. The distance is 12.5 km for men and 10 km for women, skied over five laps; there are four shooting bouts (two prone, two standing, in that order), and each miss means a penalty loop of 150 m. To prevent awkward or dangerous crowding of the skiing loops, and overcapacity at the shooting range, World Cup Pursuits are held with only the 60 top ranking biathletes after the preceding race. The biathletes shoot on a first-come, first-served basis at the lane corresponding to the position they arrived for all shooting bouts.

Laegreid’s shooting wasn’t perfect this time out, but it was very good — and very fast. The Norwegians are dominating so far, and Laegreid is showing himself to be the real deal.

So inspiring to watch.