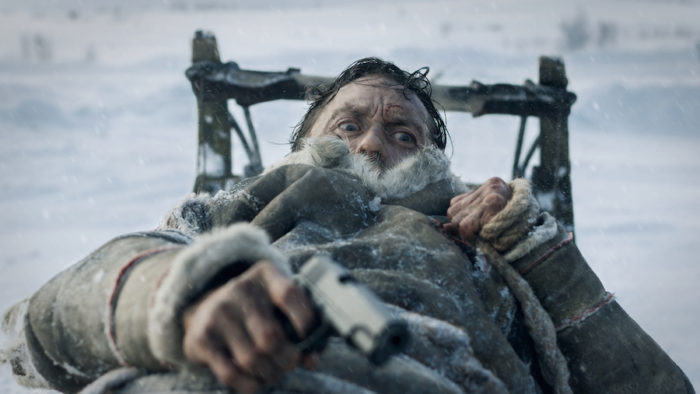 As the dark chill of winter settles in, the “Northern Thing” asserts itself here at Frontier Partisans. Craig Rullman strongly encouraged me to fire up The 12th Man on Netfix, and I’m glad I did. It’s an extremely intense two-hour ride, recounting the true story of Jan Baalsrud, a Norwegian saboteur who was the only man to survive an ill-fated mission into his Nazi-occupied country in 1943.

It’s a testament to a man’s will to survive against all odds — but more strikingly, it’s a testament to the willingness of ordinary people to aid a man in profound distress at the risk of their freedom and their very lives. It’s as harrowing a tale as Mountain Man Hugh Glass’ crawl for survival after a mauling at the paws of a griz. I suppose that I should note that it’s not for the squeamish or faint of heart. There’s some stuff that’ll make you pucker and some stuff that might make a sensitive person hurl.

It’s worth it. Most inspiring. Hell, it’s got reindeer in it; it’s a Christmas movie.

Rick Schwertfeger scouted up an outfit called Northmen: Guild of Northern Master Craftsmen. This will make your spirit soar. 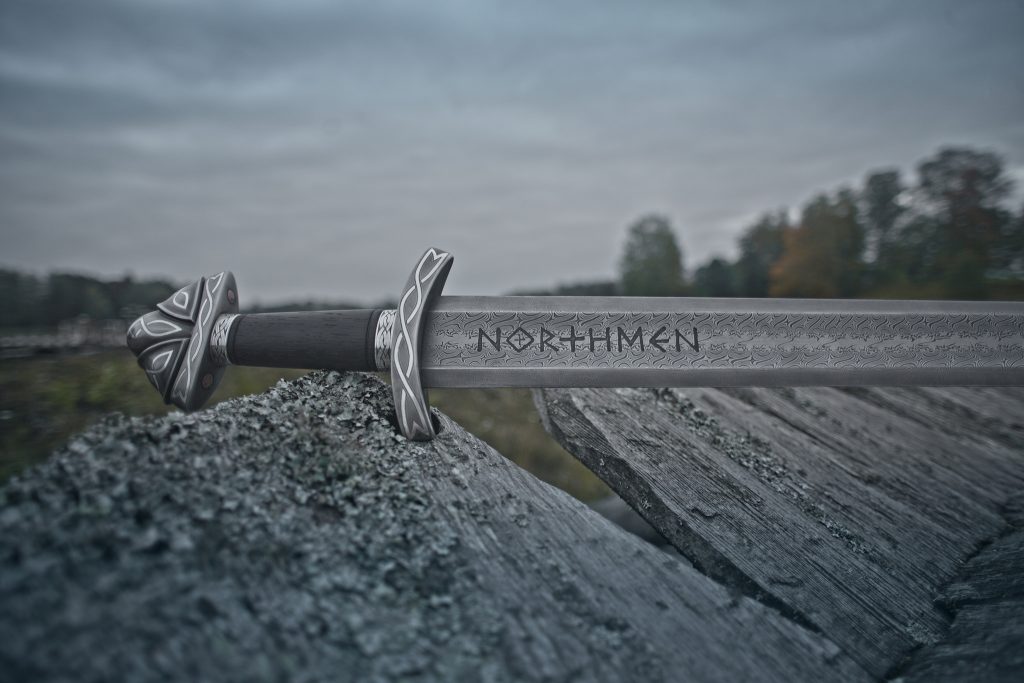 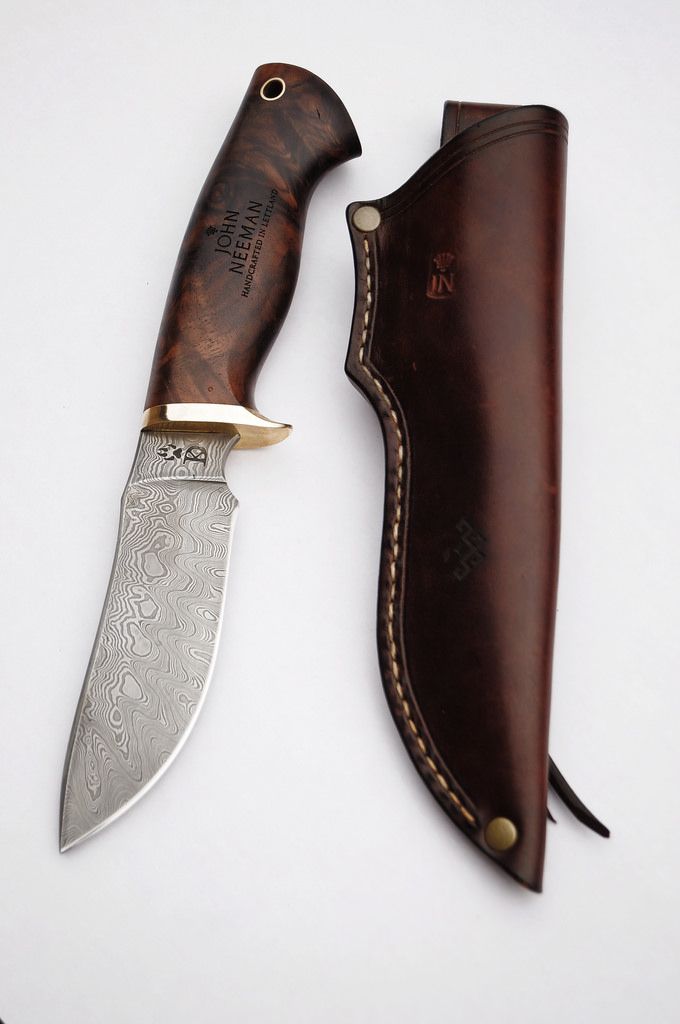 Neil Oliver’s wonderful Love Letter To The British Isles Podcast is recounting the bloody tale descent of the Far-faring Northmen upon England. I jumped in with his episode on King Arthur, Northumberland, which is only partly about King Arthur and largely about Bamburgh Castle, which I would love to someday visit. Fans of Bernard Cornwell’s Saxon Stories and the excellent Netflix drama The Last Kingdom will recognize the site as the ancestral fortress of Uhtred, Bebbanburg. 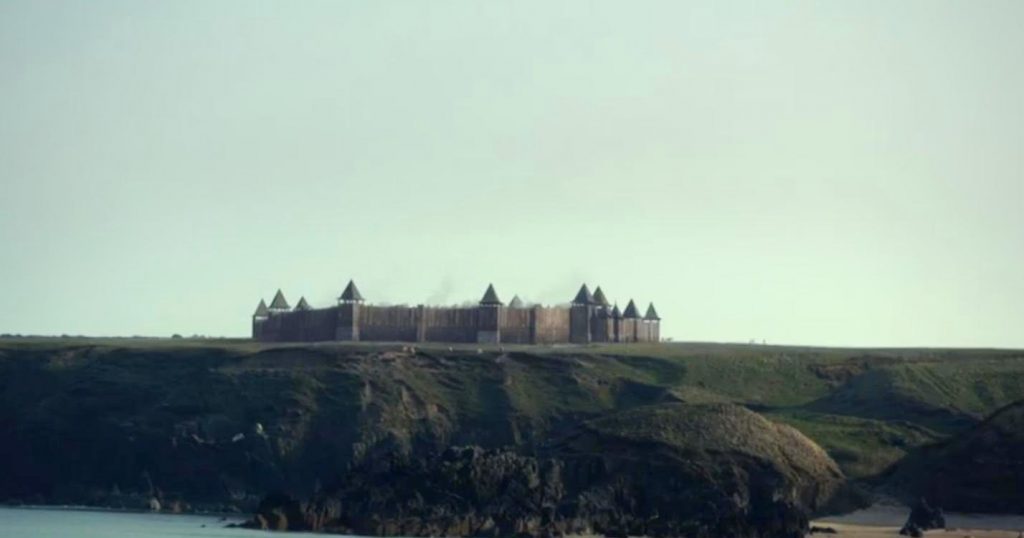 Once a frontier fort… 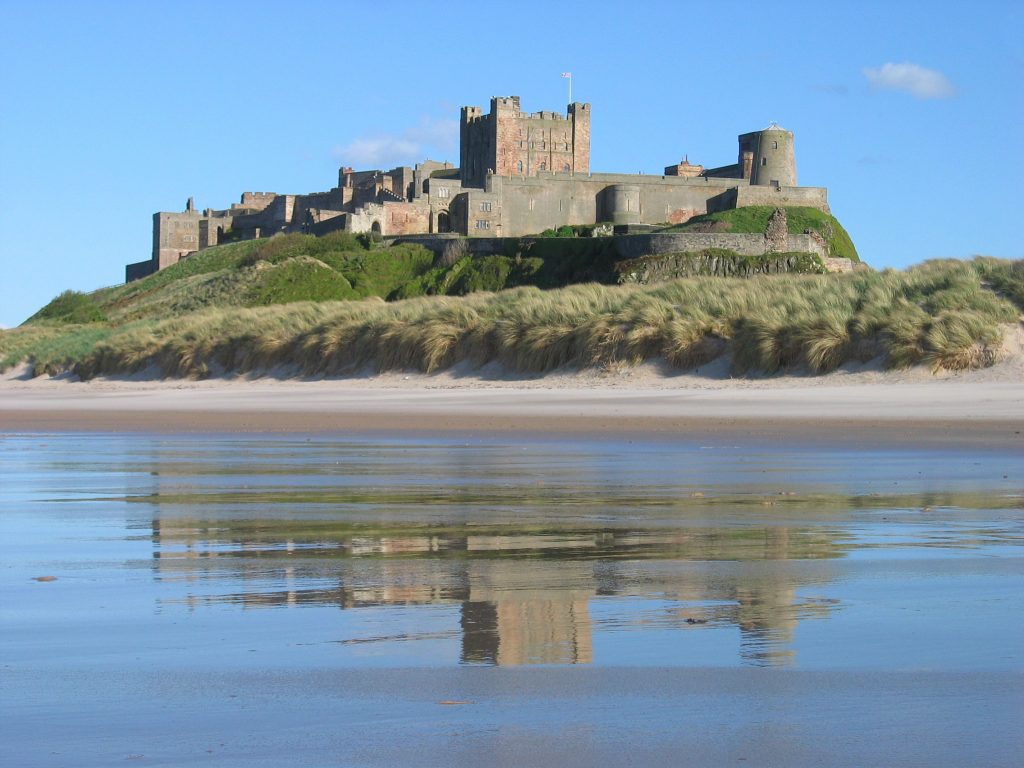 …Then a Norman castle, which is still a living residence to this day.

I enjoy all of Oliver’s work and eagerly await the release of his Blood of the Clans in the States. 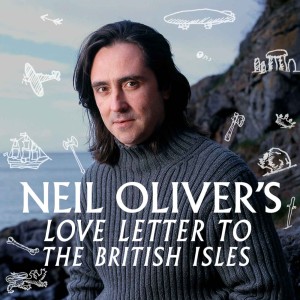 How can I not relate to a man who will cop to this:

“It’s the child in me that really started loving history and archaeology — and that child in me has never grown up… I make no apology for it and I’ve always been aware of the fact that I’ve never really grown up about history. I read fact, and I try to make sense of what I believe to be historically proven, but I allow 50 percent of my thinking to drift into things imaginary.

Tell me I’m wrong if you like, and that’s fair enough, but I love these places in part because they inspire imagination and dreams and legend and folklore.

All facts are true — but not all Truth is fact.”

Speaking of a love letter to the British Isles… 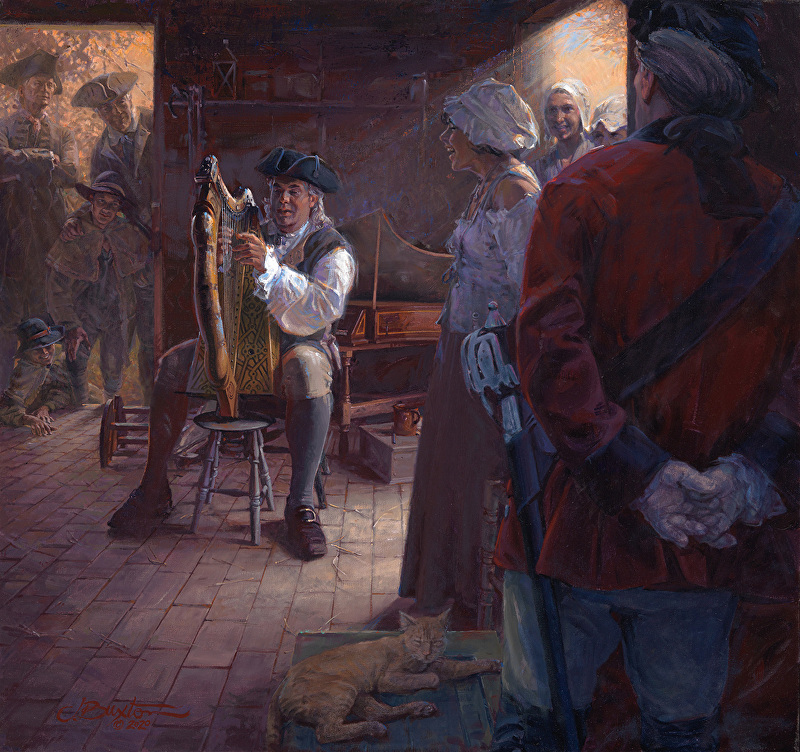 The Spellbinder’s Serenade by John Buxton.

I am ever-fascinated by the way the music of the British Isles migrated with its peoples to North America, forming the backbone of our folk and country music traditions, weaving together with other ethnic and musical roots to create rock-n-roll, etc.

The harp never really caught on in North America; it’s role largely supplanted by the fiddle. But the instrument that spellbound the Highlanders in the great halls of Scottish lairds and became the very symbol of the modern Irish nation before that nation even existed was a presence here. 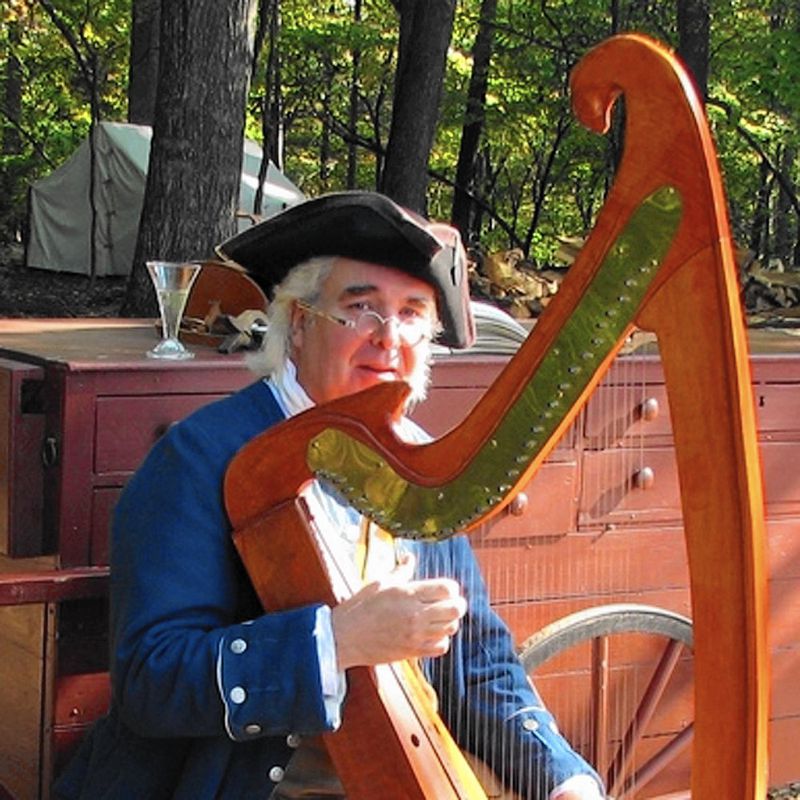 Re-enactor Robert Mouland portrays a colonial-era Irish harpist — and his portrayal is especially suited to the Christmas season. From the Lehigh Valley News’ Morning Call:

For most performances… he takes on the persona of Michael Keane (pronounced Cain), one of only two Irish harp players who were known to come to America before the Revolution. Keane, Mouland says, was part of the household of Arthur Dobbs, a wealthy Irish politician and landowner who became governor of Colonial North Carolina in 1754. The harp player left Dobbs’ employ during the French and Indian War after getting into a fistfight with British soldiers and ultimately moved back to Ireland.

Sir William Johnson, as befits a Celtic chieftain, employed a harpist named John Kain. According to Johnson biographer James Thomas Flexner, Kain eventually drifted off to Philadelphia, where he committed a murder. He was replaced by Billy the Fiddler.

Here’s a bit of the Gaelic and the harp from Gwyllyn the Bard in Outlander.

And, of course, the sublime Loreena McKennitt:

(A note in the margin: As devotees of Outlander, Clan Cornelius found it delightful that a Scottish Deerhound named GCH Foxcliffe Claire Randall Fraser won Best of Show at the National Dog Show on Thanksgiving Da. Well done Claire!). 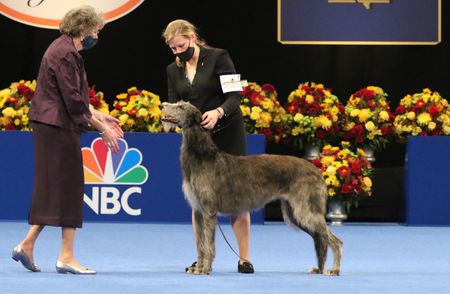 Frontier historian Ted Franklin Belue is himself a fine musician, and in recent correspondence, he mentioned that Haste To The Wedding is a tune from the 1750s that Daniel Boone liked. 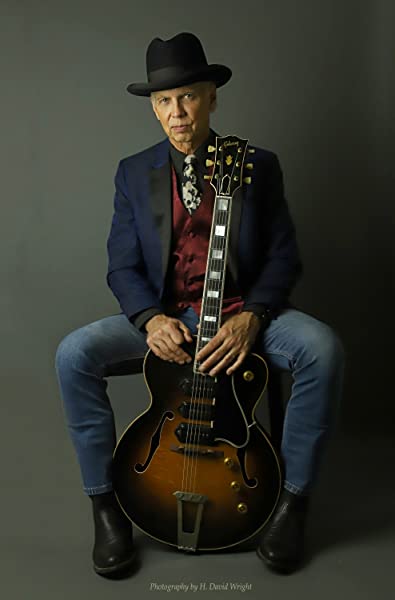 Belue is the author of The Hunters of Kentucky: A Narrative History of America’s First Far West, 1750-1792 and The Long Hunt: The Death of the Buffalo East of the Mississippi. Both are absolute must-haves for anyone interested in the Trans-Appalachian frontier of the mid-to-late 18th Century. His hot-off-the-presses  Finding Daniel Boone: His Last Days in Missouri and The Strange Fate of His Remains is a wonderful, idiosyncratic exploration of Boone’s senior years in Missouri — where he lived longer than he lived in either North Carolina or Kentucky. I don’t really like do book reviews, per se, but I’ll have a post devoted to this work shortly.

I think very highly of Ted Franklin Belue’s work, which directly inspired what I do here. It’s a great honor and a pleasure that we have had some correspondence, and it turns out he’s a fine feller. Put Belue’s books on your list for Badass Santa. I promise you’ll be glad you did.

My own Badass Santa list includes Stephen Bown’s The Company (the HBC that is) which really must be shipping from the North Pole and down through Hudson’s Bay and on by canoe. Canadian publisher. Book publishing and distribution has gotten as weird as the music business. And no, Amazon, I don’t want the Kindle version. Books like these need to be on the shelf.

On the strength of a strong review from Samuel K. Dolan, I ordered The Nine Lives of Charles E. Lively: The Deadliest Man in the West Virginia-Colorado Coal Mine Wars, by R.G. Yoho. Lively was a Baldwin-Felts detective and a labor spy involved in some of the most violent labor conflicts in U.S. history. When we get tho feeling like we’re living in tumultuous times, it’s best to remember that labor conflicts in the late 19th and early 20th centuries often turned into killing affairs. And Lively did some of that killing.

Am looking forward to this here long, violent history.

Since we’re going heavy on the music in this edition, I give you…

Samuel K. Dolan’s own book Hell Paso: Life and Death in the Old West’s Most Dangerous Town is due out in mid-December — hopefully in time for Badass Santa to load it up. In any case you know I’ll be all over that. Dolan, author of Cowboys and Gangsters: Stories of an Untamed Southwest (early 20th century Continuity & Persistence) is an ace Western historian and another fine feller. 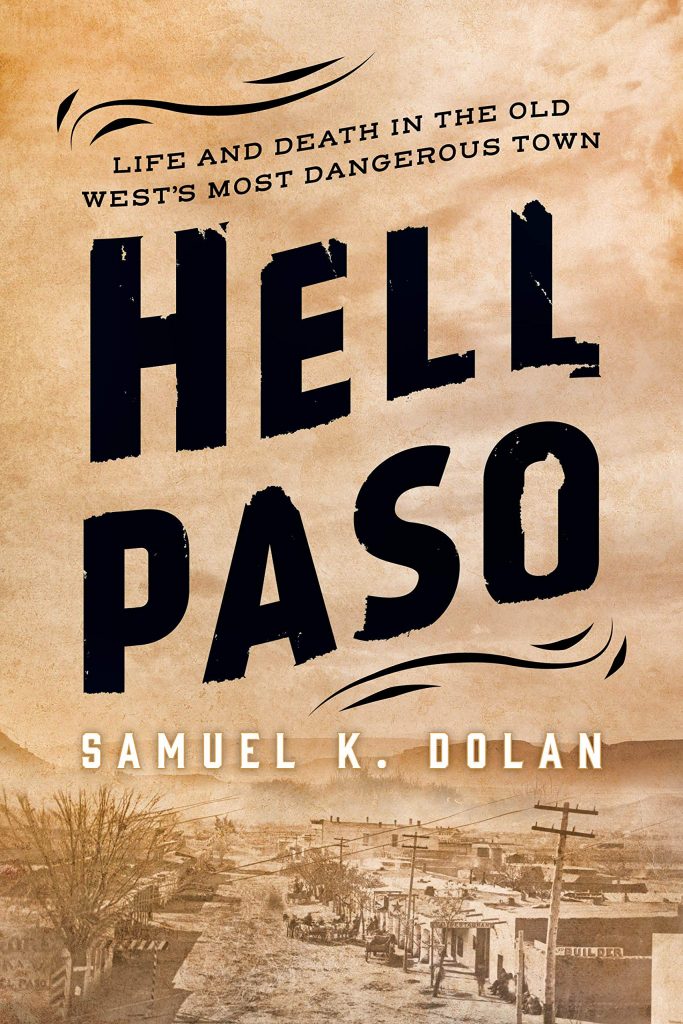 Spanning a thirty-year period, from the late 1800s until the 1920s, Hell Paso is the true story of the desperate men and notorious women that made El Paso, Texas the Old West’s most dangerous town. Supported by official court documents, government records, oral histories and period newspaper accounts, this book offers a bird’s eye view of the one-time “murder metropolis” of the Southwest.

Captain Schwertfeger urged me to offer up Nadia Dean’s film Cameron as a Yuletide gift idea. It’s past time for me to pick this work up. Her A Demand of Blood: The Cherokee War of 1776 is a first-rate work of Frontier Partisans history.

Cameron may be found at Valley River Media. 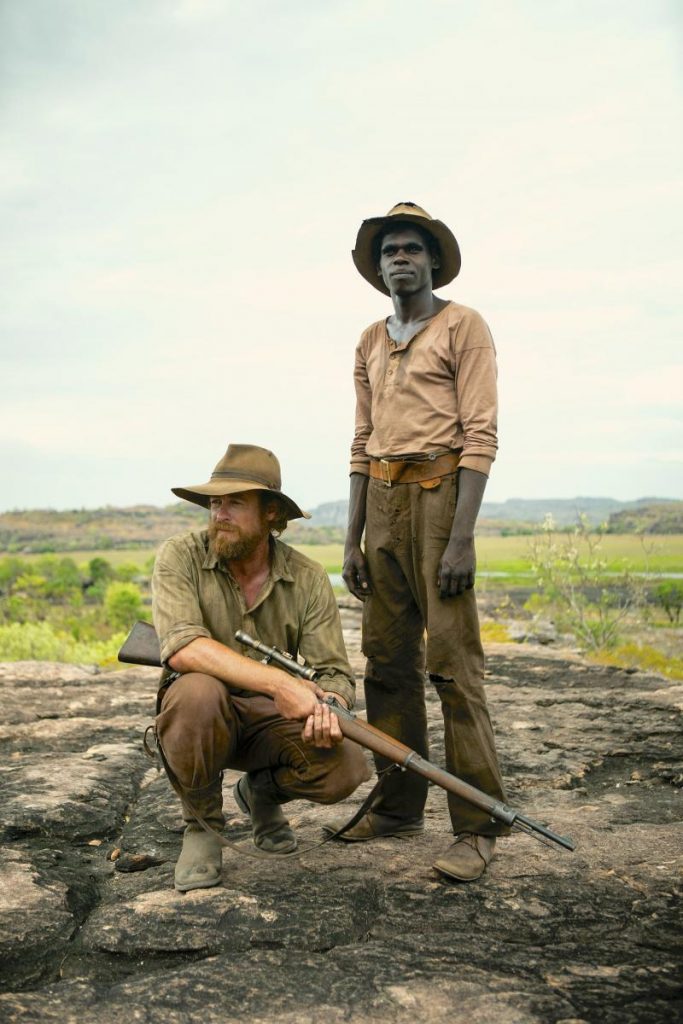 I’ll be keeping an eye peeled for High Ground — an Australian release due out in January and presumably headed to the States via streaming some time after that.

A bounty hunter (Simon Baker) and an indigenous Australian (Jacob Junior Nayinggul) hunt down the leader of an Aboriginal mob terrorising Northern Territory in this Australian outback-set period actioner.

Inspired by true events, this 1930s-set action thriller sees Travis (Baker) cross paths with Gutjuk (Nayinggul) years after he saved him from being killed by white men as a child. Together as they track Gutjuk’s uncle who leads a ruthless mob, Travis is forced to trust Gutjuk with Gutjuk now treading a dangerous line between being the friend of a white man while keeping the trust of his people.

For all the drek and the useless and ugly political posturing we have to put up with on social media, it does kick up some wonderful, enriching trails to follow. Such is the case with TOTA — Connecting People Through Culture. The Almighty Algorithm determined that I would find a group featuring a compendium of articles on martial cultures and their arts across the world would be of interest to me. You think?

The outfit, which appears to be brand new, is TOTA (Traditions of the Ancestors). There are miles of trails to go down, from Learning To Be A Mountie to Dog Soldiers In Camp to The Great Wrestling Matches of Myth and on and on. Check  out TOTA World Martial Arts. There are also HEMA (Historical European Martial Arts) groups, World Mythology, Art and Food groups and on and on. 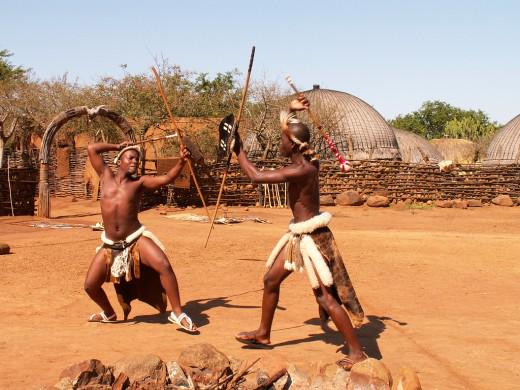 Explore combat that transcends warfare, from ritual stick fighting at Zulu weddings, to Filipino dances that hide targeting training, combat and warfare have been used to express culture for thousands of years. Discover how cultures used warrior traditions in training, sport, pleasure, and ceremony, as well as how nations and peoples fought on the battlefield.

Whether you are researching your ancestry, immersing yourself in your culture, or want to explore the cultures of the world- TOTA has the tools for you…

Lynn Woodward scouted up this TED Talk with the magnificent Rhiannon Giddens. Somehow she thought Songs That Bring History To Life might resonate….

Marilyn and I have finished our run on Black Sails (a rewatch for me, a first time for her). We feel about as bereft as Captain Flint looks here… 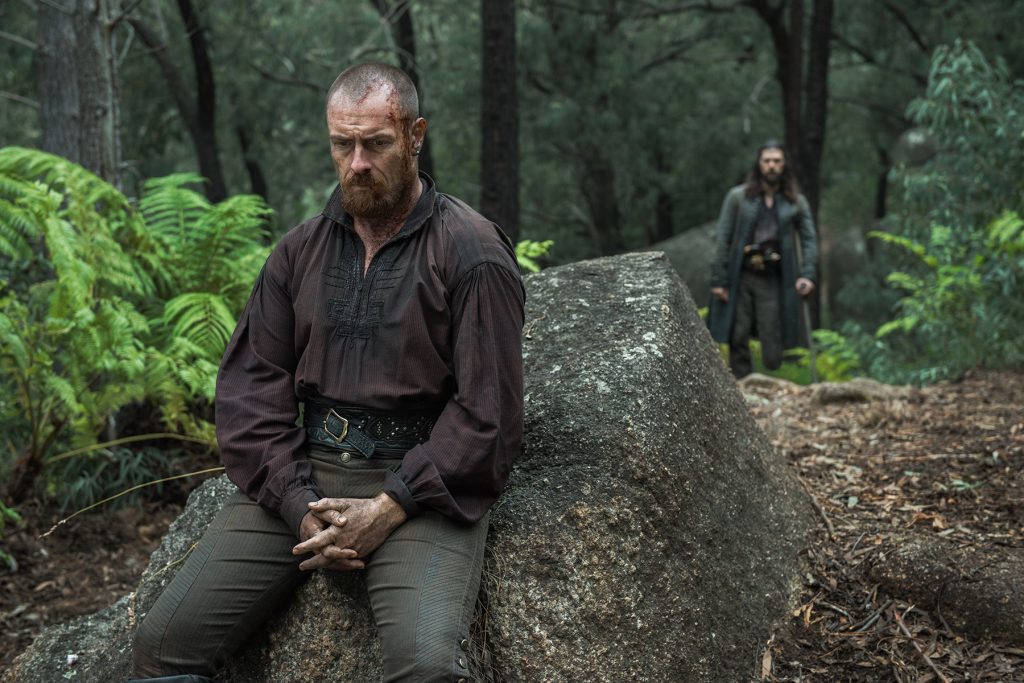 I’ve gone on about it enough, I suppose. Possibly the best Frontier Partisans TV show of them all…

(I did not know this the first time around, but the Skeleton Island (aka Treasure Island) sequences in Season 4, including the shot above, were filmed in the Knysna Forest, which I wrote about last March. General Jan Smuts and Deneys Reitz rode deep into this spooky woodland at the southern tip of the Cape of South Africa during their Boer War guerrilla campaign in 1901-02).

Nothing is going to match the immersion of Black Sails for us for a while, but we are turning our attentions to Season 2 of Cinemax’s pulpfest Warrior. Jonathan Tropper of Banshee glory returns to San Francisco’s Chinatown of the 1870s. 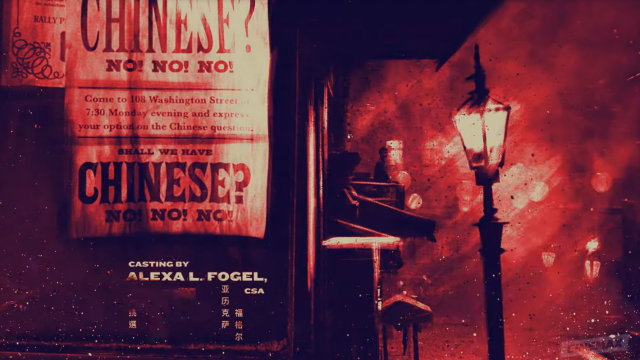 I humbly submit to you that Frontier Partisans plunder makes a fine Christmas gift — for some folks. I intend to purchase one of Lynn’s prints, so if you’re after Burnham’s Weapons, better move. And the t-shirt will remain evergreen in all political seasons: The only partisanship we tolerate in these parts is Frontier Partisanship. 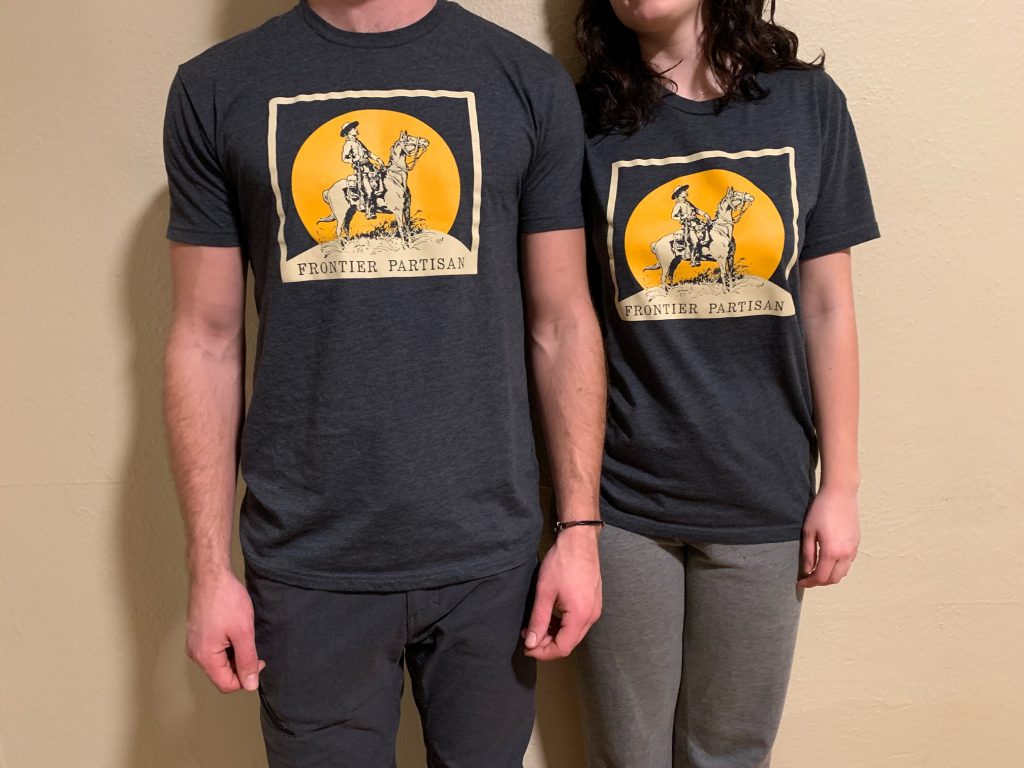 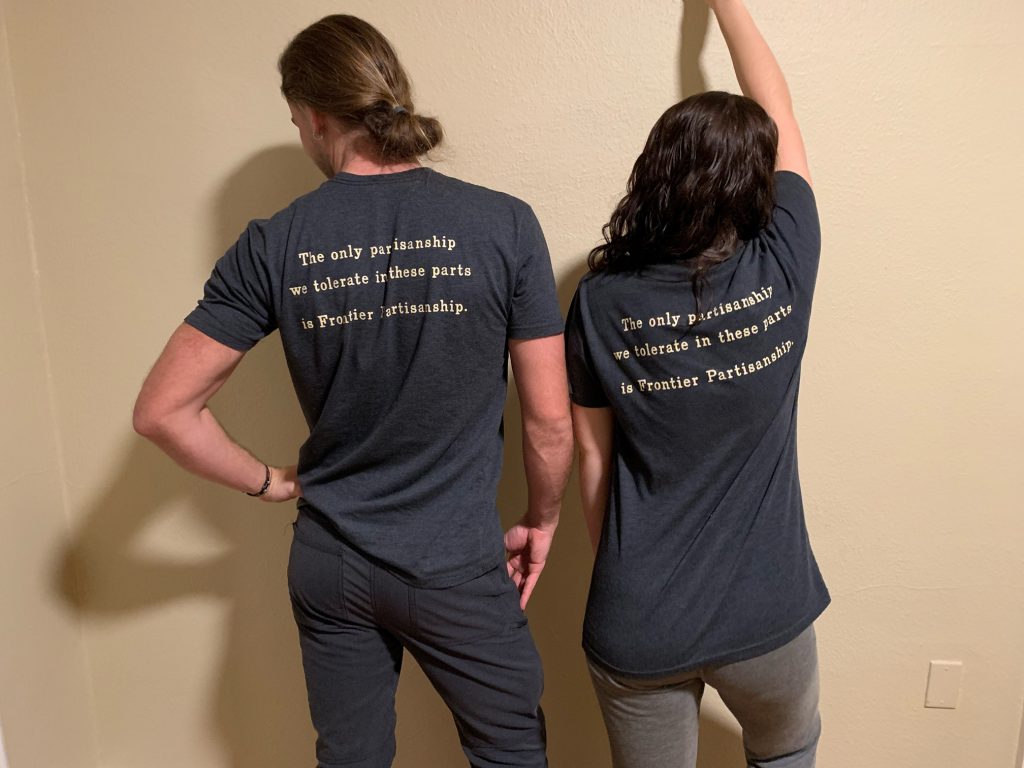 Warriors of the Wildlands may be sold out at the trading post when you read this, but there are still a handful of copies you can order from Paulina Springs Books.

In fact, if I may make so bold, I ask that you purchase any of the books recommended here from Paulina Springs or an indie of your choice. Independent book stores have been in a battle for their lives against the Leviathan, and COVID-19 sure hasn’t helped. 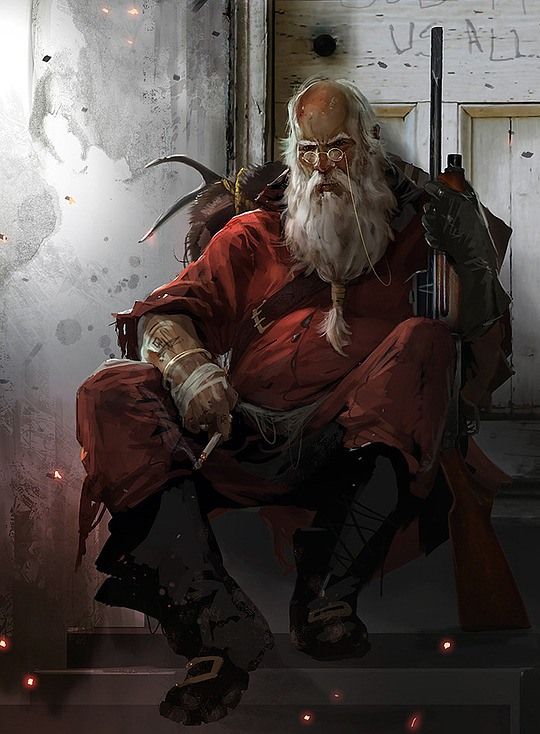