“The die was cast so deeply in blood that none of them would be forgiven by their memories.”

Woke up thinking about Revenge.

Not a personal quest for vengeance, at least at this moment. I’m talking about the novella by the late, great Jim Harrison and the 1990 movie that Tony Scott made from it, starring Kevin Costner, Madeleine Stowe and Anthony Quinn.

I must have been triggered by watching a trailer for a forthcoming documentary about Harrison. I read Revenge at an important moment in my life — newly married, just moved to Oregon, and trying to figure out how to get serious about writing. It was one of three novellas published in the volume Legends of the Fall, which story was also turned into a movie in 1994.

Harrison’s writing hit me like a round from a .50 caliber Sharps buffalo rifle, right in the brisket. This was man’s writing — concerned with  landscape, hunting, excess of all kinds, romantic/erotic obsession and death. Y’know — the important stuff. 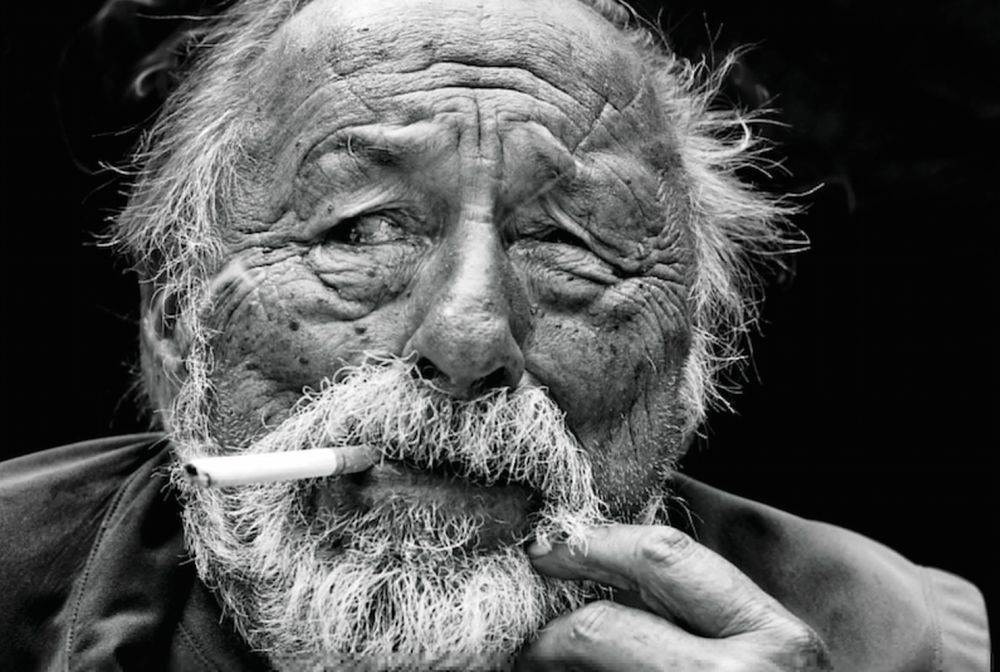 At the end of his life Jim Harrison looked like a part of the forest landscape he loved, like he’d become some sort of elemental spirit of the wood. A tree troll, perhaps.

Revenge is a brutal, doom-laden tale that suits  its borderland setting. If James Carlos Blake hasn’t read and loved this yarn, I’ll eat my hat.

Here we have a middle-aged man, Jay Cochran, once a warrior (a fighter pilot in Southeast Asia) , slightly bored with his civilian life, and drawn inexorably into a whorl of lust and love fueled, perhaps, by a craving for danger, exhilaration and annihilation. Here we have Miryea, a beautiful 27-year-old woman, a trophy wife of a powerful Mexican patron, a woman of cool taste and “almost alarming grace” — her coolness camouflage for a seething passion. Both are willing to risk everything simply to be alive.

The risk comes at the hands of the man they both betray: Baldassaro Mendez, whom everybody calls by his cute old-guy nickname, Tibey. Trouble is, Tibey is short for Tiburón. Shark.

Cochran and Tibey are tennis partners, friends. Tibey is an old school patron and a new school heroin trafficker. You don’t betray the friendship and hospitality of a man like Tibey. You don’t take from Tiburón what belongs to Tiburón. And Miryea belongs to Tiburón. But this is not merely a sin of adultery or a crime of property; Cochran’s act is a betrayal of male friendship. This must be put right. Character is fate. 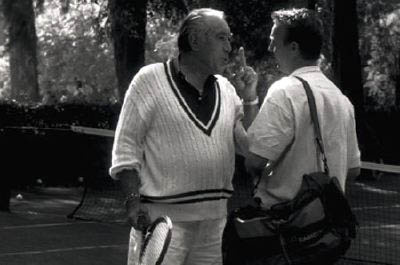 One does not simply torch up an affair with Tiburon’s wife.

“It is best to have stone eyes for what we are going to see.”

Back in 1979, when Esquire was actually a men’s magazine, they published a version of revenge, with illustrations by John Thompson. 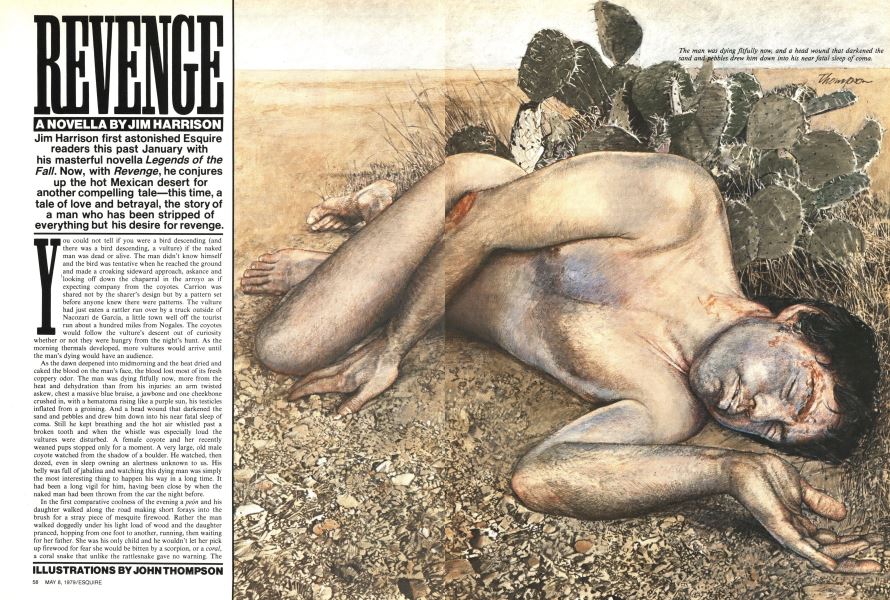 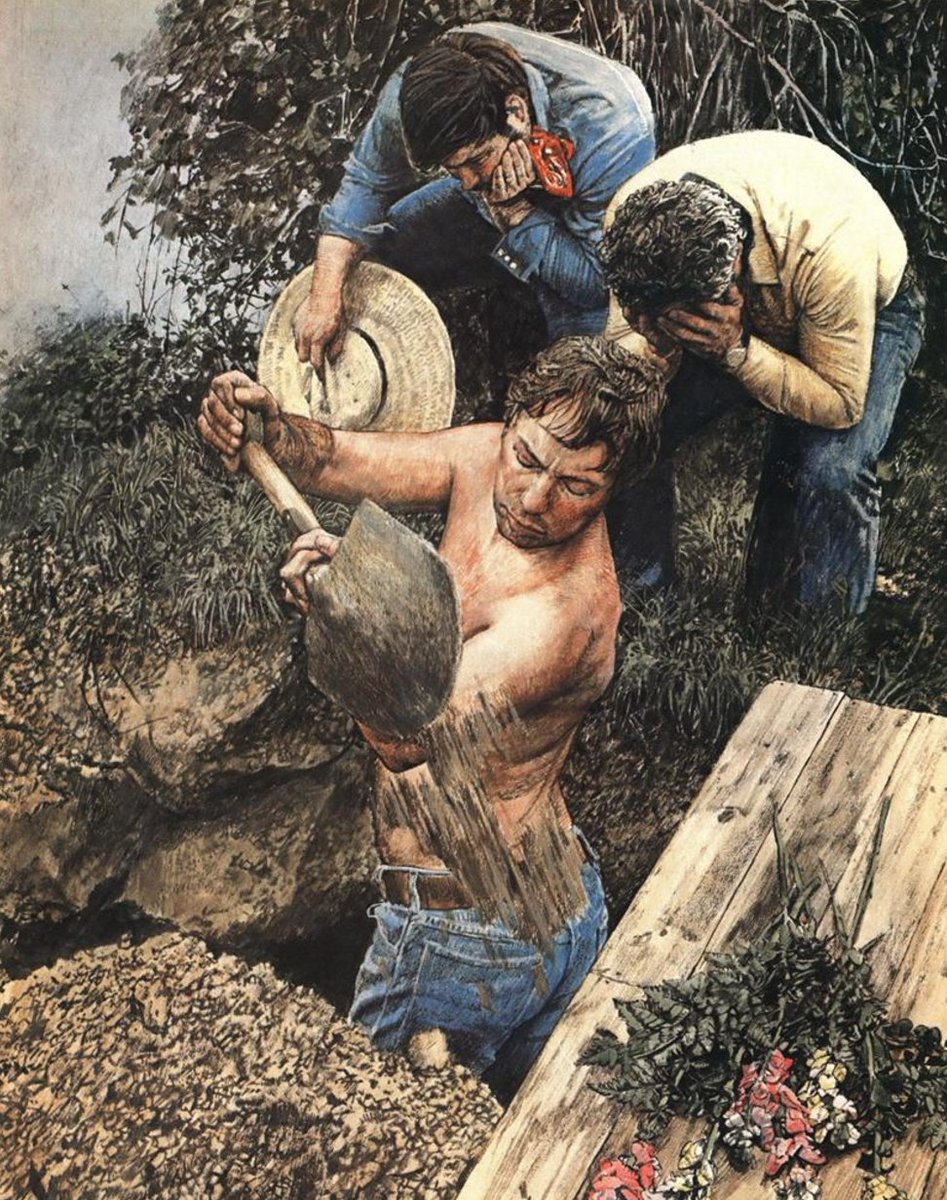 Actor Kevin Costner and director Tony Scott read it and loved it, and they optioned the screenplay that Harrison adapted from it. They fought hard to get a movie made, and in 1990, Revenge was loosed upon theaters. It tanked; it was Harrison, not Hollywood. It has since gained a cult following, to include Quentin Tarantino, which tells you a lot about the movie right there. You can rent it through Amazon Prime.

Costner plays Cochran in his jaded insouciance. Anthony Quinn is perfect as Tibey. And Madeleine Stowe (known to Frontier Partisans as Cora, the dark-haired daughter of the Grey Hair in Last of the Mohicans) is Mayea. What right man would not risk it all for her? 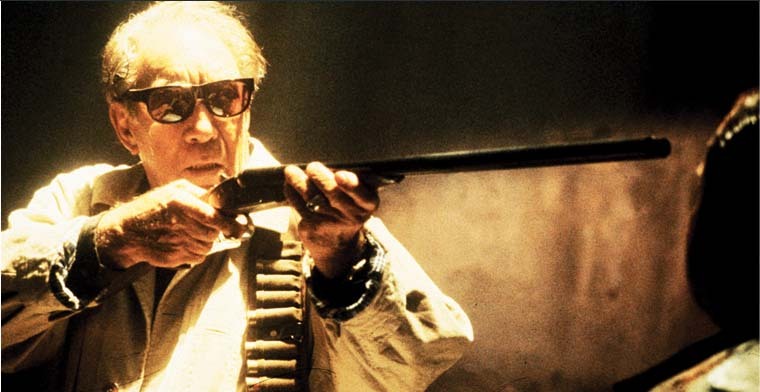 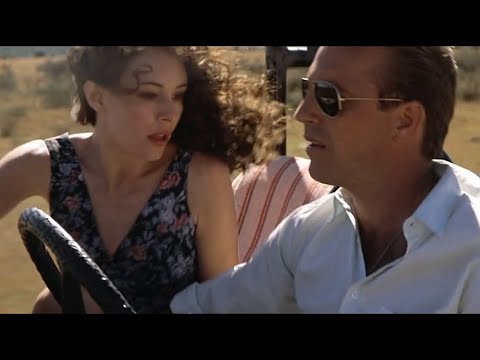 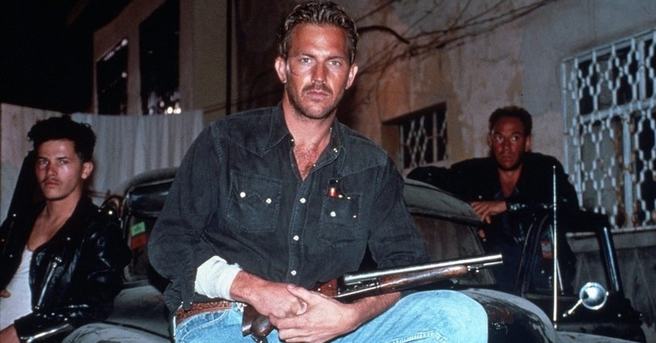 Revenge is working the same borderland territory — geographically and spiritually — that McCarthy and Blake ride, where character is fate and the ardent-hearted pay in blood for the life and love they steal from the long-fingered clutches of Death. Tim Willocks, too, knows that territory. It is a territory where it is understood, as Cormac McCarthy wrote in The Crossing:

“…that if women were drawn to rash men it was only that in their secret hearts they knew that a man who would not kill for them was of no use at all.”