Though overshadowed by men like Daniel Boone and Simon Kenton, William Whitley was their equal, a great frontiersman and a remarkable man who deserves to be remembered as much as any of Kentucky’s founders. 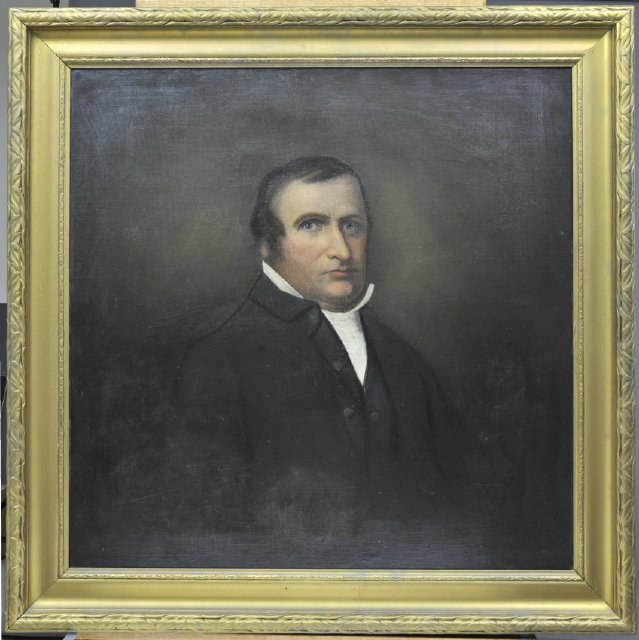 William Whitley was an all-time badass American Frontier Partisan. You’d be hard-pressed to find a more archetypal figure — a pioneer and Indian fighter of classic mold. There was no ambiguity in Whitley; he was an ardent American patriot and the scourge of the native peoples who struggled to retain their hunting grounds in Kentucky and upper Tennessee and of the British who sought to deploy them to stem the westward push of the nascent American nation.

The inscription on his powder horn seems to capture the spirit of the man:

Wm. Whitley I am your horn

The truth I love, A lie I scorn

Fill me with the best of powder

See how the dread terrifick ball

You with powder Ile supply

For to defend your Liberty 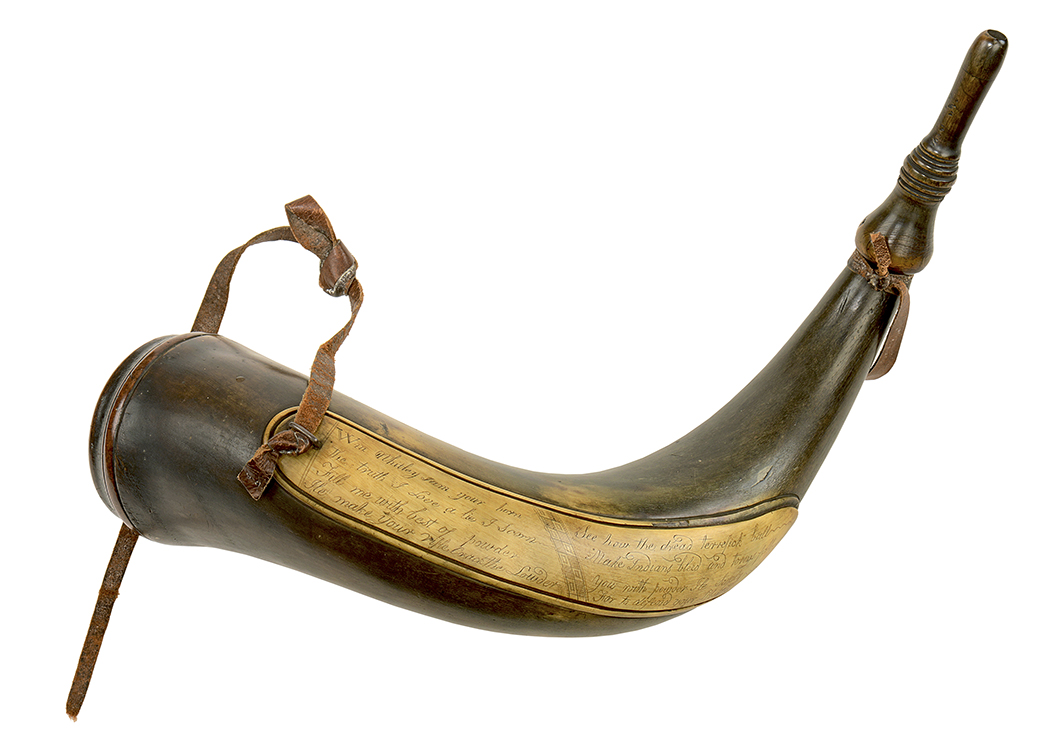 Whitley’s lineage was classic Frontier Partisan — a son of Virginia born in 1749 to Scots-Irish parents who had emigrated from Ulster. He married Esther Fullen some time around 1771 and the couple started a family that would ultimately include 11 children — again fulfilling the classic mold of the borderland clan. Besides her fecundity, which was not exceptional for the time and place, Esther would be noted for her frontier hospitality and for being a crack shot.

The Whitleys were among the early pioneers of Kentucky in 1775. They followed the Wilderness Road, taking the Skaggs Trace branch to St. Asaph Station or Logan’s Fort (present day Stanford, Kentucky), the beginnings of what would be a long association with the Kentucky military leader Benjamin Logan.

Late in life, he recalled being much shaken by seeing the body of William Ray, one of the first frontiersmen killed by Shawnee and/or Mingo warriors in an early raid on Harrodsburg. It was the first man he’d seen scalped, and it set his mind in the belief that the Indians were brutal savages. That mindset was reinforced by finding whole families of settlers slain and mutilated. And, in the classic borderland cycle of brutality, Whitley would become a scalp-taker himself.

Through the brutal and brutalizing 20-year war for the Ohio Valley, Whitley honed his field craft and his martial prowess. He scouted for several punitive expeditions across the Ohio, including George Rogers Clark’s successful attack on Peckuwe in 1780.

While he was as rough and ready as any of his peers, Whitley was a builder and “a high-society man” as the Kentucky Historical Association puts it. In the late 1780s and early ’90s, he and Esther built the first brick house west of the Appalachians, right along the Wilderness Road in what would become Crab Orchard, Kentucky. It was an imposing Federalist-style edifice with two-foot thick walls that made it a virtually impregnable fortress — with an escape tunnel in case it wasn’t, quite. 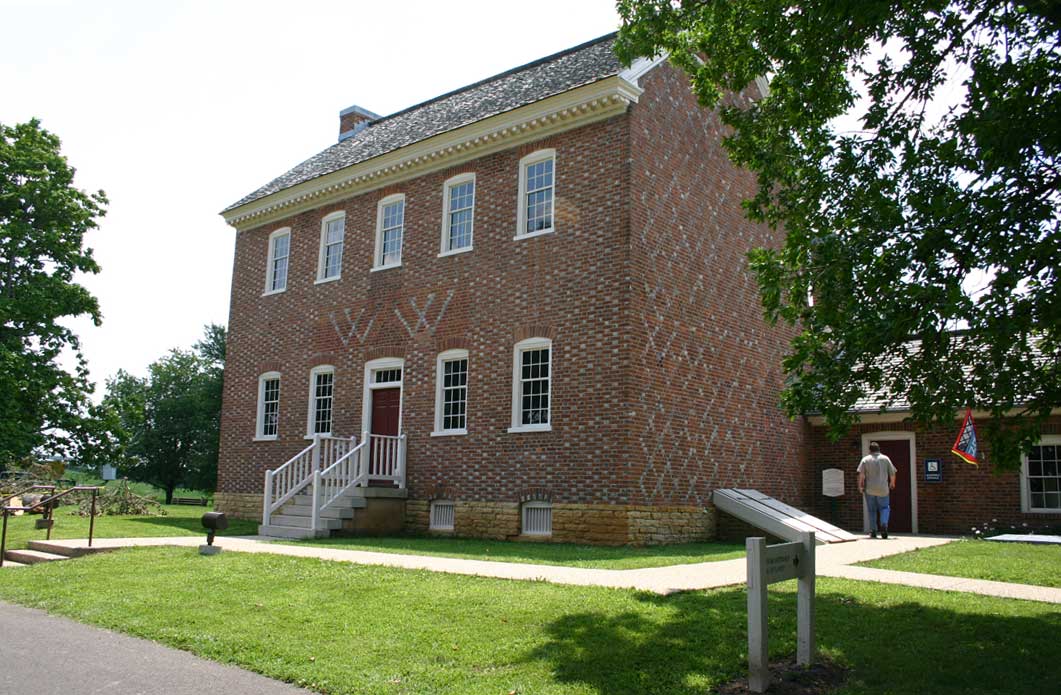 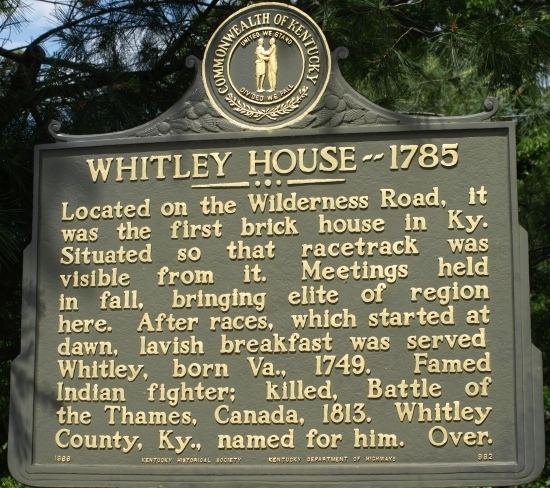 The Indian threat had abated in Kentucky by the 1790s, but it wasn’t over; the region saw small, murderous raids from across the Ohio and incursions of the Chickamauga (militant Cherokeee) from the south. In 1794, Whitley led 200 militiamen in a successful punitive raid against the Chickamauga militants that ended their operations in central Kentucky.

As peace broke out in old Kentucky, Whitley turned to commercial pursuits — and the sporting life. He named his estate Sportsman’s Hill, which gives us a pretty good picture of his passions and priorities. He built a clay race track within view of the house and introduced horse racing to Kentucky. It caught on. interestingly, Whitley is said to have established the practice of running the races counter-clockwise instead of the English clockwise fashion. Whitley was anti-British, after all.

Somewhere around 1800, Whitley commissioned a fine rifle from maker Jacob Young. The rifle still exists and, in typical Whitley fashion, it is classic Kentucky. 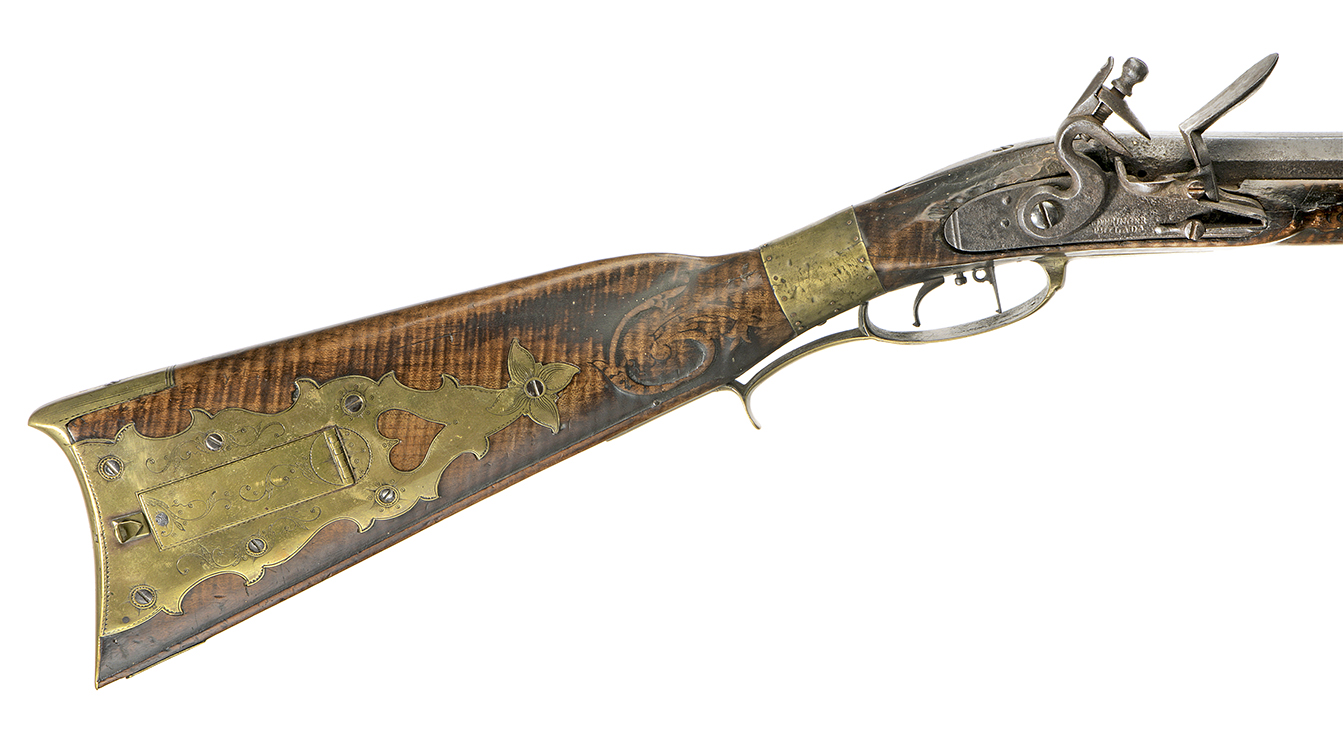 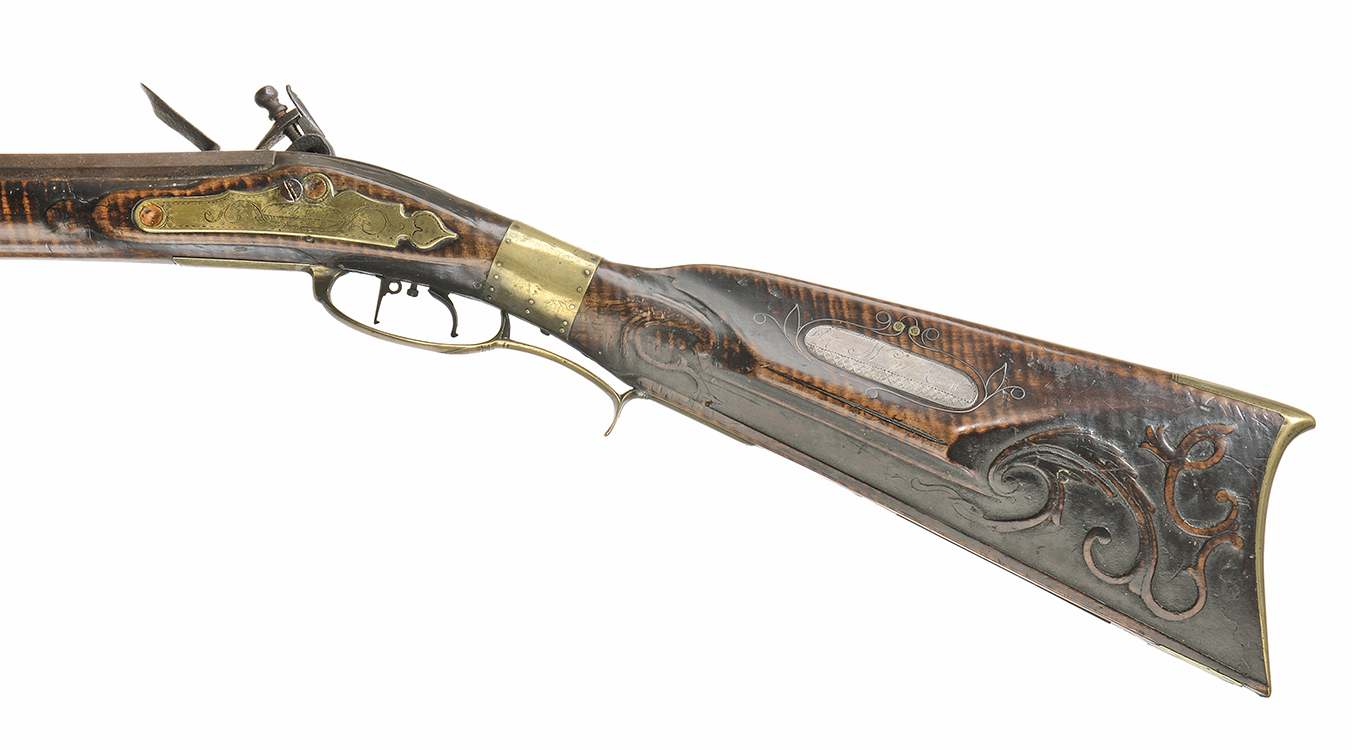 Note the brass wrapping on the wrist. That’s a “time of use” repair of a crack in the most vulnerable part of the stock. The inscribed powder horn was a companion piece, carried on a trophy strap recreated by ace frontier crafter Lally House.

The Kentucky Rifle Association’s 2014 publication Riflemen of the Cumberland notes that:

Family legend is that William Whitley carried this rifle and powderhorn to the Battle of the Thames, where he lost his life on October 5, 1813. Although he was in his sixty-fourth year and a veteran of more than twenty Indian engagements, Whitley answered Kentucky Governor Isaac Shelby’s call for volunteers during the War of 1812.

He enlisted as a private in John Davidson’s company that formed a part of Richard M. Johnson’s Kentucky Mounted Infantry. In all of his campaigns he had been wounded only once, but he had often said that, “the death I crave is to die in my country’s defense.”

He would get the death he craved, which is reminiscent of the fall of the great African frontiersman, 65-year-old Frederick Courteney Selous in battle in East Africa in 1917 during the Great War.

Whitley is said to have had a premonition of his death, telling  friend John Preston that he would die the next day. Such premonitions were common on the frontier in cultures that believed strongly in dreams and portents. The great Shawnee war leader Tecumseh, who had built a powerful Indian coalition allied to the British in the war, is also said to have prophesied his own death at the Thames.

According to Riflemen, the ever-ardent warrior had already drawn blood in pre-battle skirmishing.

… a short time before the battle he brazenly swam his horse across the river to get scalps from three Indians whom he had just killed. 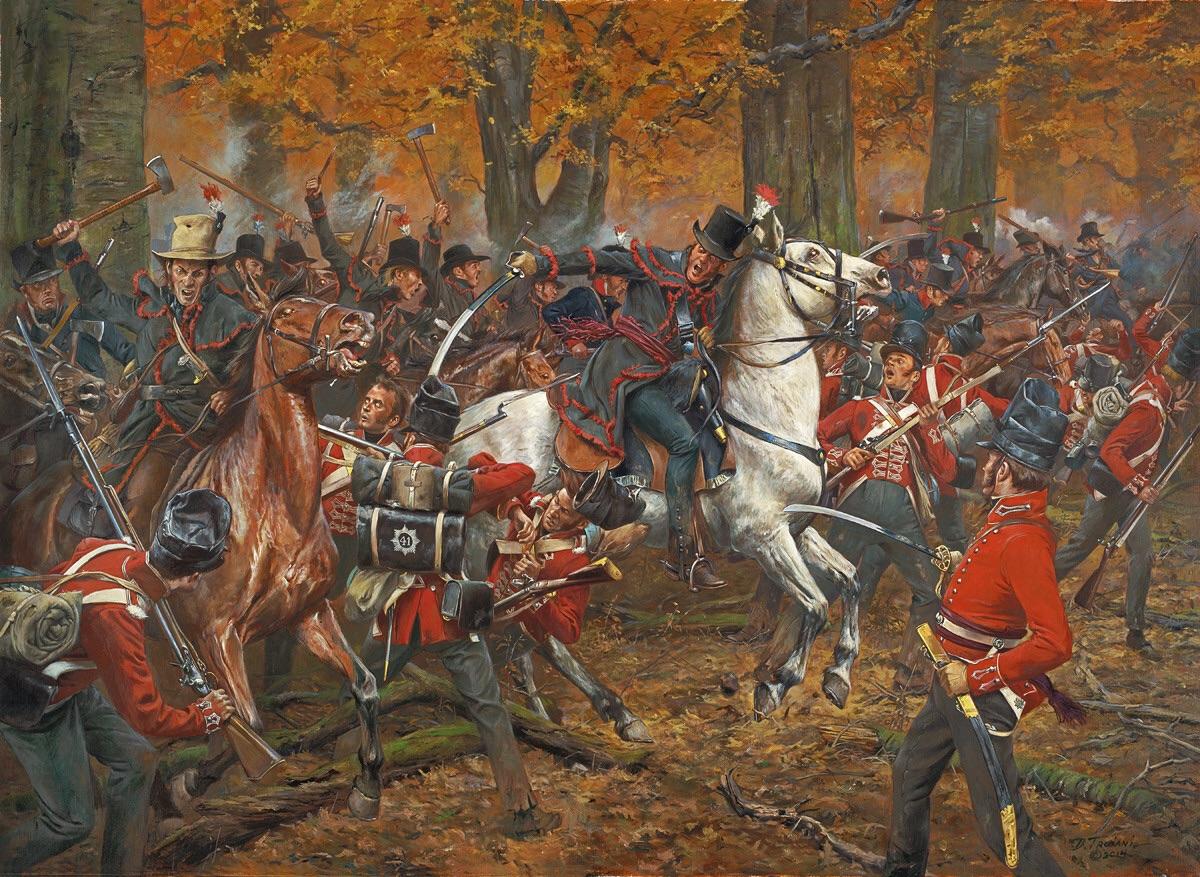 Don Troiani’s depiction of the Kentucky Mounted Infantry on the attack at the Thames. Theirs was a decisive victory in the War of 1812.

The British troops were demoralized and gave way quickly, but Tecumseh’s warriors were anchored in woods and swampland, and they were determined to put up a fight. To avoid running his entire command into a kill zone, Col. Johnson offered to lead a cadre of volunteers out to draw enemy fire. The cadre was called a “Forlorn Hope,” common 18th and 19th Century usage for a unit tasked with attempting to breach an enemy stronghold.

The 20 man unit was simply mowed down. Tecumseh’s warriors fired a volley that unhorsed 19 and mortally wounded 15. Among the dead was William Whitley. Family lore has it that he and Tecumseh fired on each other simultaneously in the fray, leaving both great Frontier Partisan warriors dead on the field. I’d love to think this is true, in all its symmetry and heroic poetry. In the realm of legend, it is. But as for history, no one knows who killed Tecumseh and no one ever will.

Whitley’s friend John Preston returned Whitley’s horse, his gun, and powder horn to Esther in Kentucky. She would live on another 20 years, one grand pioneer lady of Old Kaintuck.

Whitley’s family would spread out across the American continent. one grandson was a giant in the Rocky Mountain Fur Trade — one Bill Sublette.

The Whitley home is now a historic site in the Kentucky State Park system, still guarding the Wilderness Road. 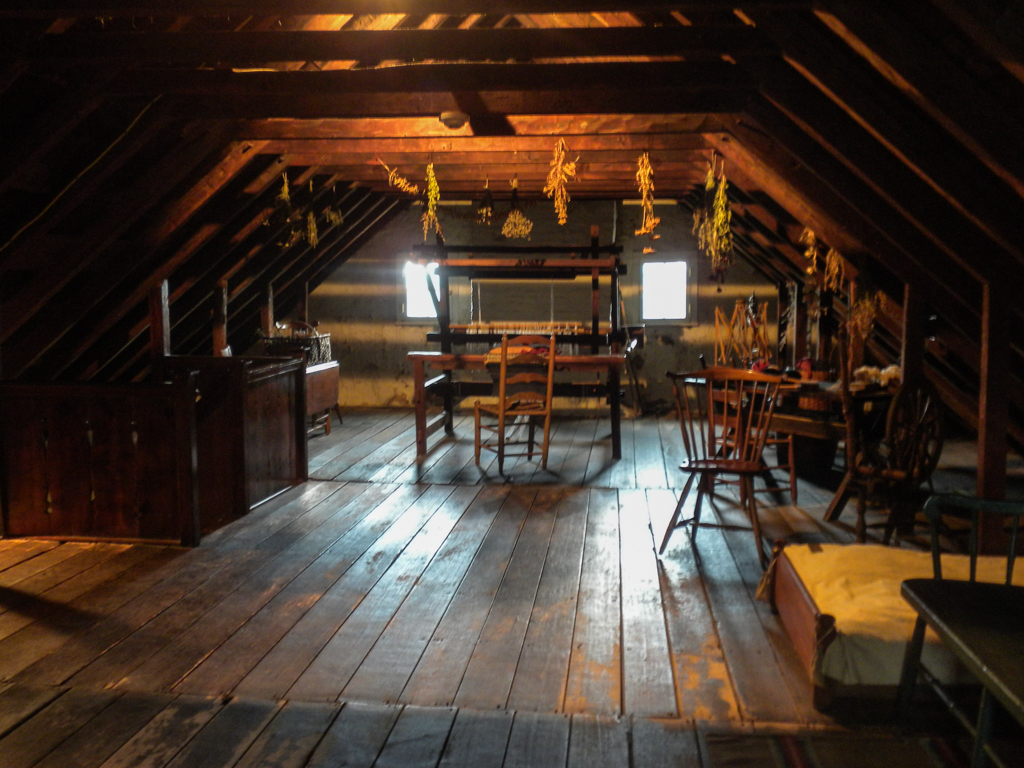 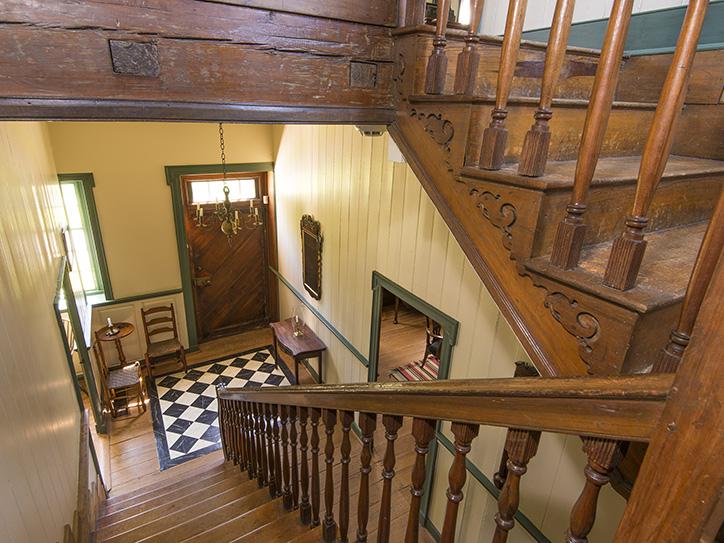 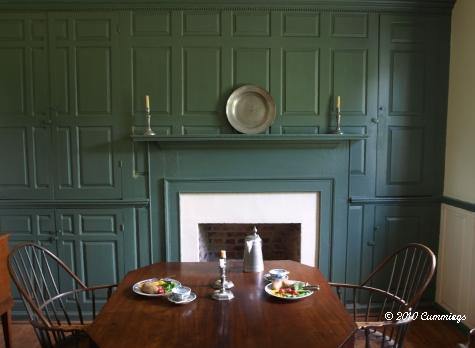