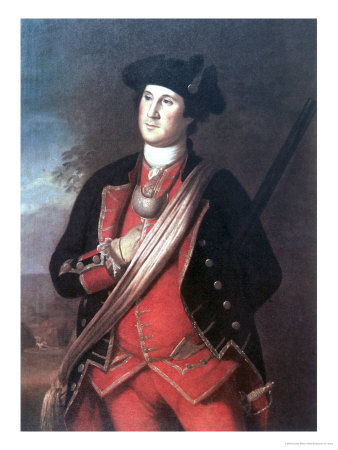 The Fourth of July is America’s Independence Day, but it is also the anniversary of a signal event in frontier partisan warfare. On July 4, 1754, Lt. Colonel George Washington of the Virginia Militia surrendered Fort Necessity in southwestern Pennsylvania to an overwhelmingly superior force of French regulars and their Indian allies.

The British and the French were sparring over their respective claims to the western Pennsylvania area. Virginia’s Governor Dinwiddie had already sent the youthful Washington to Fort LeBouf in the Ohio Country tell the French that they were trespassing and must leave. The French were polite and hospitable, but not inclined to acquiesce to the Virginians’ request. Dinwiddie sent out a construction party to build a fort at the Forks of the Ohio, but they were sent packing and the French began construction of Fort Duquesne.

Washington was ordered back to the frontier with orders to act on the defensive but to restrain anyone who attempted to obstruct colonial settlement activities. Dinwiddie was acting on his own authority, without any authorization from London, and putting such orders in the hands of an ambitious, aggressive young militia colonel was a good way to start a war.

That’s just what happened. Getting wind of an apparently belligerent  scouting party composed of French Marines (their elite forest fighting force), Canadiens and Indians in the area, Washington determined to attack their camp, with the aid of some Indian auxiliaries led by one Tanacharison, known to the British as The Half-King because of his subsidiary stature under Iroquois suzerainty. Tanacharison’s presence was another handful of dry tinder to toss on the fire: he had been insulted by the French and was seething for revenge.

Washington and about 40 of his troops struck the camp, killing several of the French soldiers. Most significantly, Tanacharison tomahawked the French commander, Joseph Coulon de Villiers de Jumonville, who had in his possession a summons ordering the British trespassers to leave the territory. The French considered de Jumonville to be on a diplomatic mission. His killing was what you call an international incident.

Washington knew the French would likely counterattack him, so he retreated to Great Meadows and built a log palisade, which was completed on June 3. A month later, a force of about 700 French regulars, militia and Indians came down on him and his 400 men, which included a hundred British regulars under a Captain James McKay, whose regular commission put him on an equal footing with the Virginia militia colonel.

Fort Necessity, as it was called, was poorly situated, with the French holding ground high enough to fire into the fort and the surrounding earthworks. When rain drenched the meadow and dampened the soldiers’ powder, Washington had little choice but to surrender the hapless fort. The British departed the fort on July 4.

The commander of the French force was the brother of the slain de Jumonville, and he was in a chippy frame of mind. One of the surrender documents contained an admission from Washington that he had “assassinated” the emissary de Jumonville. Washington later insisted that the translation he was given acknowledged responsibility for “the death of” or “the killing of” the French officer, not “assassination.”

It was all a terrible mess. These skirmishes in the forest of western Pennsylvania would have world-shaking consequences. Within a year, the British and the French would be at war in earnest, in a conflict that spanned the globe. The British victory in the Seven Years War left the Empire ascendant, especially in India, but it had profound unintended consequences in North America. The colonists learned to assert themselves, and by July 4, 1776, that self assertion included a Declaration of Independence. And it would be Washington who would make that declaration good. The fallout from defeat would fundamentally damage the Bourbon monarchy in France, which would fall in the French Revolution of 1789.

And so the hinge of fate swung at the impetus of a young militia officer and a handful of frontier partisans in the deep backwoods of North America.

Note: The attack on de Jumonville’s camp and the surrender of Fort Necessity are well-depicted in the excellent documentary,  The War That Made America.